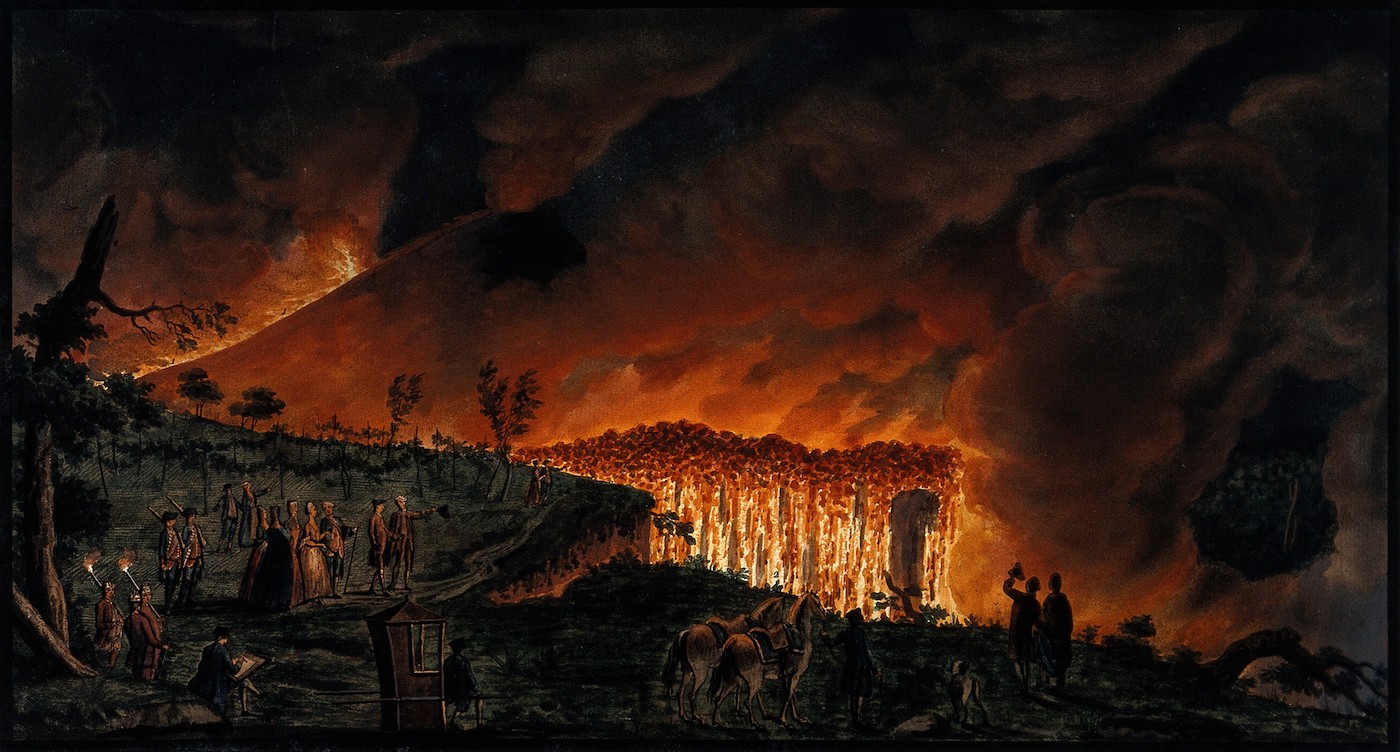 Lava emerging from Mount Vesuvius at night and running towards Resina, 11 May 1771

A British diplomat serving as Envoy Extraordinary to the Kingdom of the Two Sicilies, William Hamilton (1730–1803) spent a large part of his life in Naples — observing volcanic activity, collecting antiquities, and shepherding adventurous travelers, including kings and queens, to the summit of magma-rich mountains. Present for the eruptions of Mount Vesuvius during the mid-to-late eighteenth century, Hamilton wrote Campi Phlegraei in two parts, with a tertiary supplement, based on his Observations on Mount Vesuvius (1772) for the Royal Society. Composed as a bilingual French and English edition, the work is a notable watershed in volcanology, trading biblically-inflected narratives of catastrophe and creation for precise observational description. To illustrate these volumes in a manner true to his approach, Hamilton recruited the English-born Neapolitan artist Peter Fabris, otherwise known for his paintings of the city’s “pulsating street life — with sellers of melons, cooked apples, corn, truffles and fried pastries”, writes Robert Holland. Hamilton charged Fabris to paint with “the utmost fidelity”, making sure “each stratum is presented in its proper colours”, and fifty-nine of the resultant gouaches were engraved and hand-colored to accompany Campi Phlegraei (literally, the flaming or fiery fields, named after the area west of Naples). In curator and writer James Hamilton’s assessment, Fabris “revolutionized the art of the volcano, and changed our ways of seeing them”.

The illustrations progress from macro- to microscopic worlds as we traverse the volumes. Detailed renderings of tufa, scoriae, and pumice follow from nocturnal landscapes lit by brimstone and fire, winter scenes with smoke pluming through snow. Although engaged with late-Romantic reimaginings of the pastoral, picturesque, and sublime, Fabris seems almost able to dissolve aesthetic history in his landscapes by foregrounding an enduring wonder for the unstable geological processes beneath our feet — capturing the awe of those moments when bedrock becomes anything but. In two complementary images, recording the eruption of Vesuvius in 1779 during day and night, the volcano sprays tephra and lava like a monstrous Roman candle, while figures appear to dance and prostrate in joy or agony across an illuminated bay. 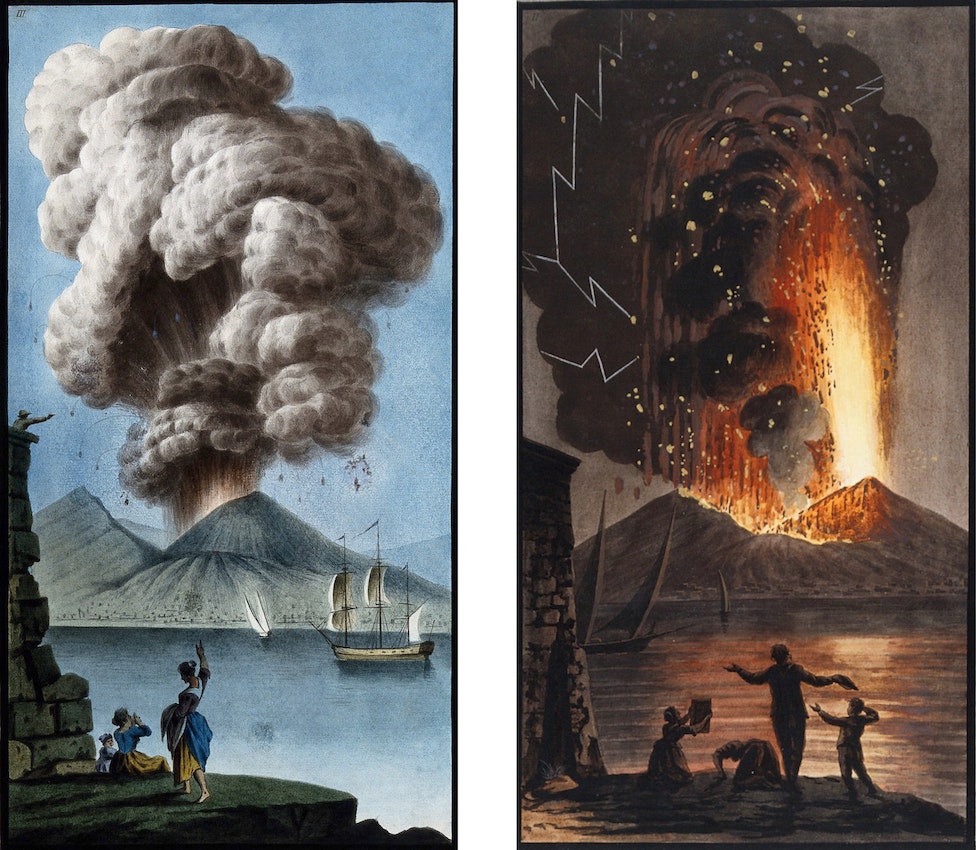 Of course, this had all happened before. In 79 CE, a seventeen-year-old Pliny the Younger looked up from his writings, gazing across the Bay of Naples, and noticed what seemed to be an odd cloud formation, like “an umbrella pine” atop Vesuvius’ peaks. At times “it looked light colored”, he noticed during the course of his observation, and “sometimes it looked mottled and dirty with the earth and ash it had carried up”. He informed his uncle, Pliny the Elder, who, emboldened by scholarly fascination and an impending sense of catastrophe, summoned a fleet of quadriremes. As “tall broad flames blazed from several places on Vesuvius”, the Elder uttered fortune favors the brave and then set sail into a coruscating dark, calming his shipmates by assuring them that the inferno was merely a bonfire set by peasants without the means of extinguishment. This history and the story of what happened next stems from a sole surviving eyewitness account: the nephew narrating his uncle’s demise. In two letters written to Tacitus twenty-five years after the event, Pliny the Younger describes with lasting terror Pompeii’s burial beneath pyroclastic flows. “Then we saw the sea sucked back, apparently by an earthquake, and many sea creatures were left stranded on the dry sand. From the other direction over the land, a dreadful black cloud was torn by gushing flames and great tongues of fire like much-magnified lightning. . . . We were amazed by what we saw, because everything had changed and was buried deep in ash like snow.”

Visiting Vesuvius in the late 1700s was to encounter a past made newly palpable. The cities of Pompeii and Herculaneum had begun to be exhumed from their ashen limbo. And after a period of relative peace since 1767, Vesuvius awoke once again, bubbling with various degrees of activity between 1770–1779 and 1783–1794. As young British gentlemen capped their education through tours across Europe’s classical landmarks, perhaps with a copy of Edmund Burke in tow, they often sought sublimity on the slopes of the volcano and were sometimes guided by Hamilton. “In many ways more authentic than other stops along the Grand Tour” — writes Noam Andrews in an article about Hamilton’s “love affair with Vesuvius” — “this site was alive: visitors could revel in the volcano's sublimity, cautiously witnessing occasional spurts of pre-catastrophe”.

You can browse a selection of Fabris’ illustrations, courtesy of the Wellcome Collection, below, and a rare, complete set of the Campi Phlegraei volumes, held by the Claremont Colleges Digital Library.

Mount Vesuvius in eruption in 1767, from the mole at Naples

Mount Vesuvius from the sea shore above Resina

A quarry from which stones were cut to make the pavements of Naples, showing strata of lava from Mount Vesuvius

Interior of the Vesuvius crater showing the little mountain inside it, with spectators

Little mountains raised in 1760 by the eruption of Mount Vesuvius, inland and offshore

Interior of the crater of one of the little mountains raised by the eruption of Vesuvius in 1760, with large and small fragments of lava

Entrance of the grotto at Posillipo, called Piedigrotta, reputed to be Virgil's tomb

The Pisciarelli (a hot spring) issuing from the cone of the Solfatara, and a man bathing in the hot waters

The Porto Pavone on the island of Nisida

The Solfatara, and the issue of hot vapours from underground lakes

The crater of Monte Guaro or Barbaro

The island of Ischia seen from the sea

Lacco (Lacco Ameno), on the island of Ischia composed of volcanic tufa, with other islands raised by volcanic eruptions

The valley Atrio di Cavallo between Vesuvius and Somma

The Capo dell'Arco promontory on the island of Ventoténe

Interior of the cone of the Somma mountain, showing strata of lava

The island of Stromboli, smoke erupting from its peak

Lava emerging from Mount Vesuvius at night and running towards Resina, 11 May 1771

The Fossa Grande of Mount Vesuvius

The road leading from the Grotto of Posillipo inland to Pianura

Six pieces of lava from inside the crater of Mount Vesuvius

Seven pieces of tufa from the vicinity of Naples

Specimens of stone and volcanic matter found on Mount Vesuvius, including lava enclosed in marble

Polished schists of marble and other mixed stones from Mount Vesuvius

Pieces of volcanic minerals from Solfatara

Stones or crystals from Mount Vesuvius

Pieces of lava and vitrified, flinty matter found after the eruption of Mount Vesuvius on 8 August 1779

Lava, scoriae and vitrified matter found after the eruption of Mount Vesuvius on 8 August 1779