Characters and Caricaturas by William Hogarth (1743) 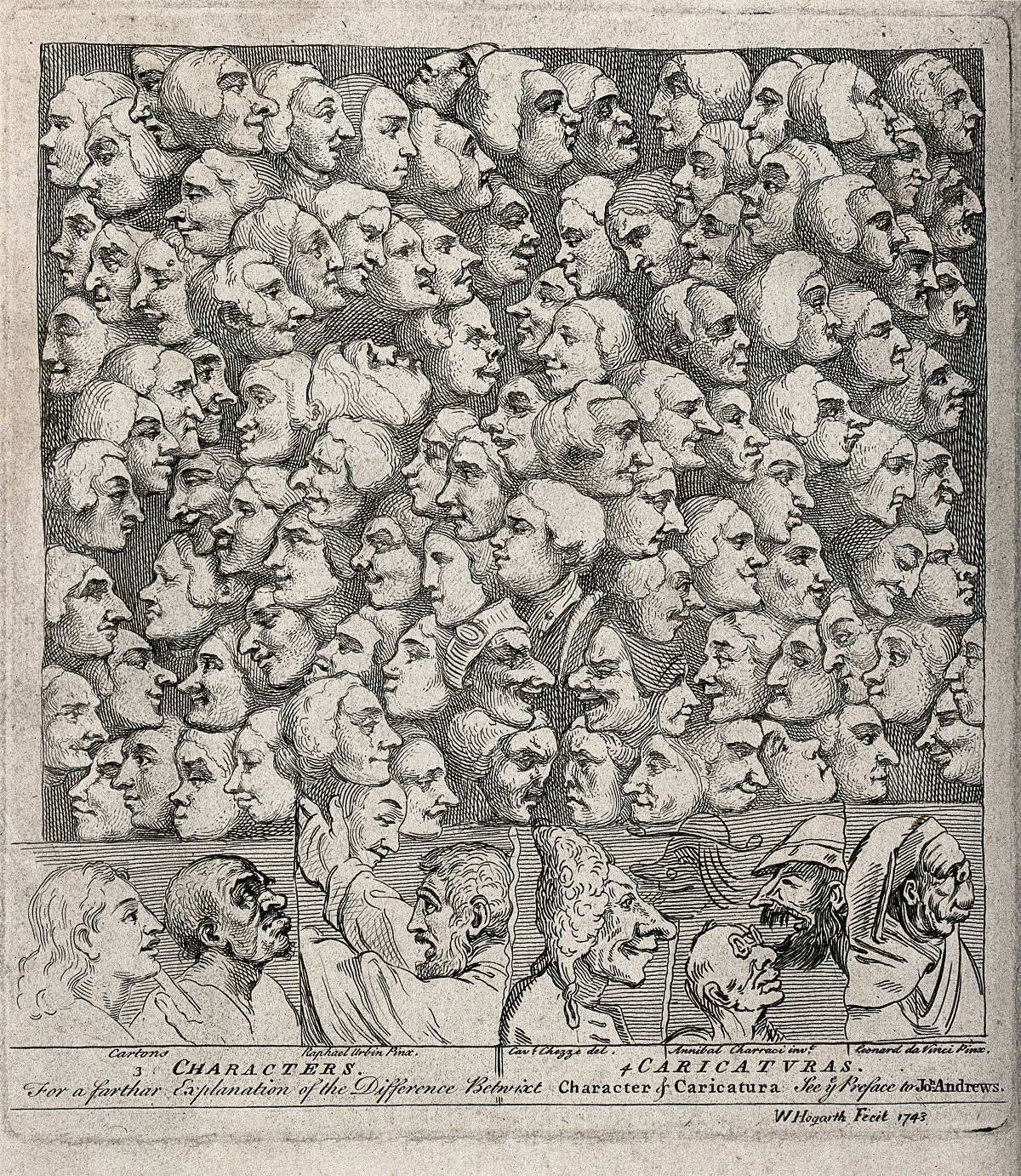 Familiar to many will be that exasperating feeling that arises when accused of being that very thing you pride yourself on not being. It's a feeling the English artist William Hogarth evidently felt acutely when critics derided him for being a mere "caricature" artist. So moved was he by this ongoing slight, that he produced this 1743 print explaining the difference between characters and caricatures — which Hogarth saw as radically different — and demonstrating his style as being firmly aligned with the former. For Hogarth the comic character face, with its subtle exploration of an individual's human nature, was vastly superior to the gross formal exaggerations of the grotesque caricature.

He later had this to say about his motivations behind the print:

Being perpetually plagued, from the mistakes made among the illiterate, by the similitude in the sound of the words Character and Caricatura, I ten years ago endeavoured to explain the distinction by the above Print; and, as I was then publishing Marriage a la Mode, wherein were characters of high life, I introduced the great number of faces there delineated (none of which are exaggerated) varied at random, to prevent, if possible, personal application when the Prints should come out...

Along the bottom of the print, to the left, Hogarth has reproduced three character figures from the works of Raphael, a style with which he clearly identifies. To the right sit four caricatures: a head copied from Arthur Pond's Caricatures; heads from Annibale Carracci's Due Filosofi; and (perhaps rather unfairly) a Leonardo da Vinci grotesque reproduced from Têtes de Charactêres — and floating above the first and second of these caricatures a child-like cartoon, as if to emphasise the naivety of such a style. Above the strip, in a wonderfully overwhelming swarm of heads which take up the vast majority of the print, Hogarth has drawn over a hundred faces in a style much closer to the "characters" of Raphael.

At the very bottom he's provided a note on some helpful further reading: "For a farthar Explanation of the Difference Betwixt Character & Caricature See ye Preface to Joh. Andrews." Here he refers to his friend Henry Fielding's 1742 work Joseph Andrews, in which Fielding calls himself a "Comic Writer" and Hogarth a "Comic Painter" — both aligned with a sensitive realism associated with depicting character, as opposed to the crude distortion of caricatures (which Fielding aligns with the "burlesque").

He who should call the Ingenious Hogarth a Burlesque Painter, would, in my Opinion, do him very little Honour; for sure it is much easier, much less the Subject of Admiration, to paint a Man with a Nose, or any other Feature of a preposterous Size, or to expose him in some absurd or monstrous Attitude, than to express the Affections of Men on Canvas. It hath been thought a vast Commendation of a Painter, to say his Figures seem to breathe; but surely, it is a much greater and nobler Applause, that they appear to think.