In the eighteenth and early nineteenth centuries, America was a land that allowed for improbable transformations. A person could, like Daniel Boone, be born to a weaver on the western frontier, fight in two wars, invade the Indian territory of Kentucky, go bankrupt as a businessman, flee to Spanish Louisiana, and end up becoming a folk hero lauded for his exploits as a hunter, trapper, and all-round honest dealer. Boone’s trajectory was, of course, out of the ordinary — but it would be hard to overestimate the importance of self-reinvention in America’s early days.

Chester Harding (1792–1866), the artist who painted the only known portrait of Boone, was himself a master of self-reinvention. Born in rural Conway, Massachusetts, he moved in his teens to the western part of New York State, where he helped his family build a log house in the wilderness. By age nineteen, however, he yearned for something beyond a local life of labor. When the War of 1812 broke out — he recalls in his laconic memoir, My Egotistigraphy — “I changed my mode of life”.

This first attempt to get away from home was not wholly successful. Serving as an army drummer, Harding was posted to Sackets Harbor, New York, on the shore of Lake Ontario, which was “threatened with attack by the British.” But the only attack Harding suffered was of the dysentery that laid him low until he was discharged and sent back to his hometown.

Once the war was over, Harding struck out on his own as a businessman, selling a patent for a new spinning-machine part in Connecticut. All in all, it did not go well. He lost most of his money gambling and soon went into debt. After marrying and becoming a father, he tried becoming a tavern-keeper to stave off his creditors but only managed to pay off “some old debts by making new ones.” One night, to avoid imprisonment, he took off alone to Pittsburgh, where he found work as a house painter. But he was so “lonely and unhappy” that,

as soon as I had saved a few dollars, I started for my wife and child. I walked over mountains, and through wild forests, with no guide but the blazed trees. Bears, wolves, deer, and turkeys I met so often, that I would hardly turn around to look at them.

Reunited with his family, Harding scraped by as a sign painter and fell in with a fellow “sign, ornamental, and portrait painter” named Nelson, whose portraits obsessed him:

He [Nelson] would not let me see him paint, nor would he give me the least idea how the thing was done. I took the pictures home, and pondered on them, and wondered how it was possible for a man to produce such wonders of art. At length my admiration began to yield to an ambition to do the same thing. I thought of it by day, and dreamed of it by night, until I was stimulated to make an attempt at painting myself. I got a board; and, with such colors as I had for use in my trade, I began a portrait of my wife. I made a thing that looked like her. The moment I saw the likeness, I became frantic with delight: it was like the discovery of a new sense; I could think of nothing else. From that time, sign-painting became odious, and was much neglected.

In the years to come, Harding would travel around America, painting portraits for small fees, first in New York, then in Paris, Kentucky, with later stays in Philadelphia, and St. Louis. After spending two years in London honing his craft, Harding returned to Boston and earned a reputation as one of the most accomplished American portraitists of his day.

He painted President James Madison, several congressmen (including Daniel Webster), and many businessmen, philanthropists, and their wives. But perhaps his most memorable portrait remains his early picture of Daniel Boone. Certainly, Harding’s recollection of painting this picture forms one of the most memorable passages in his memoirs: 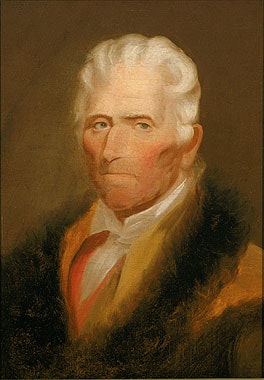 I found the object of my search engaged in cooking his dinner. He was lying in his bunk, near the fire, and had a long strip of venison wound around his ramrod, and was busy turning it before a brisk blaze, and using salt and pepper to season his meat… He was ninety years old, and rather infirm; his memory of passing events was much impaired, yet he would amuse me every day by his anecdotes of his earlier life. I asked him one day, just after his description of one of his long hunts, if he never got lost, having no compass. “No,” said he, “I can’t say as ever I was lost, but I was bewildered once for three days.”

My Egotistigraphy is an eccentric book. Harding did not have the energy to finish it before he died. His son filled in the remaining pages with quoted diary entries and letters, as well as his own much less colorful narration. Still, it remains a fascinating self-portrait of a “self-made man”.

Photograph of Harding in the early 1860s, taken by the L. C. Handy Studios in Washington DC — Source.