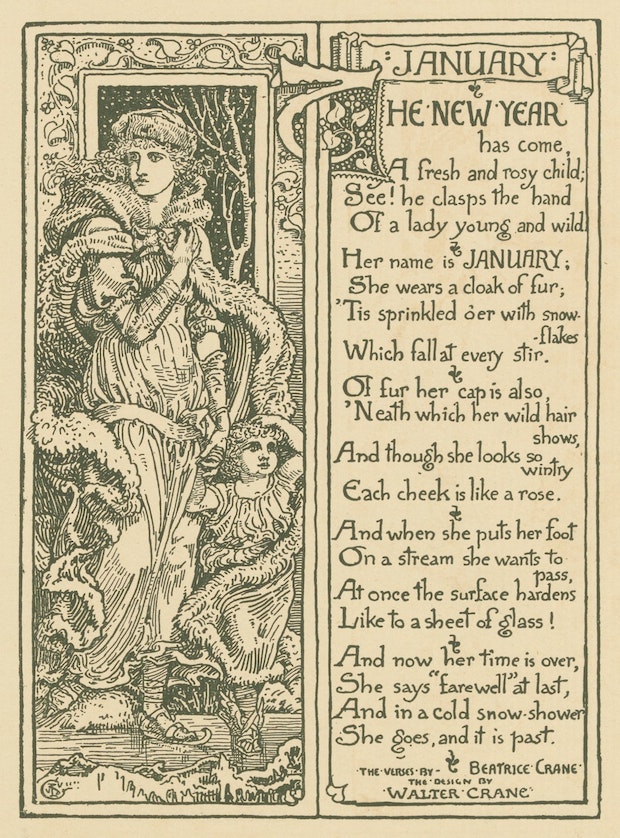 While others celebrated New Year’s Eve, Walter Crane (1845–1915) mourned December’s passing. Honeymooning in Rome as 1872 drew to a close, the young artist found himself contemplating Shelley’s Dirge for the Year (1821): “January gray is here, / Like a sexton by her grave; / February bears the bier, / March with grief doth howl and rave”. This striking image of a personified calendar inspired Crane’s tempera and gouache The Death of the Year, in which a procession of Months entomb the bier of yesteryear in “a pillared porch of a temple — the house of time.” Shelley aside, Crane was fresh from a trip to the Uffizi, where he had feasted on Spring (ca. 1480) by Botticelli, whose paintings, remembered Crane, had not yet been “re-discovered by the critics” and were “more or less scattered, and sometimes ‘skyed’ in less important rooms”. Crane may have found inspiration for his funeral scene in the ensemble of Spring and perhaps also saw, in Botticelli’s highly hung masterpieces, an artist equally underlooked. Infatuated with the pre-Raphaelites, Crane and his circle had been panned by London critics as of a mode “mystico-medieval” and “loathly”, with Crane in particular being a “academician of the nursery”.

As if taking that last criticism to heart, Crane’s Death of the Year is a sober, adult reworking of his 1870 King Luckieboy’s Picture Book. In this children’s story, the boy king Luckieboy sits on a throne and greets the months as they are ushered past by his footman Tempus. A monocled Mr. March arrives arm-in-arm with Mr. March Hare. May is predictably beautiful, “with a nose-and-a-gay, and a train which was borne by two little twins”. September, the recipient of summer’s harvest, balances bottles of wine on either side of his Dionysian wreath. And, approaching expiry, December rides in on a yule goat seeming “very old”, but there is not a hint of death. He comes laden with crisp holly and “all that was jolly”, mainly puddings and gifts. Treated as a diptych, King Luckieboy’s Picture Book and The Death of the Year offer a parallax view on aging. The passage of time can seem like a frolic or entombment, depending on how much remains. 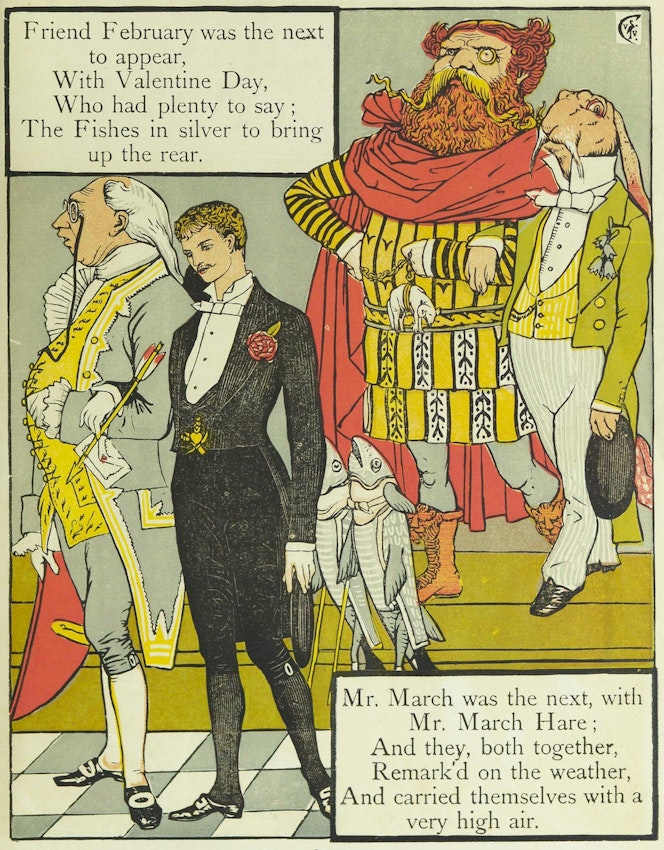 Created sometime around 1889 with his daughter Beatrice (1873–1935), The Procession of the Months synthesizes Walter’s two earlier treatments of the calendrical theme, reflecting age across the gutter between text and image. As with their contemporaneous collaboration Flora’s Feast: A Masque of Flowers (1889), Walter illustrated the verse that Beatrice wrote. In the case of The Procession of the Months, it seems the images came later, for the preface notes the poems’ creation when she was “quite a child”, demonstrating how “each Season, with its ever-changing beauties, was fully realized by the child’s quick, artistic imagination.” In the case of Beatrice Crane, her imagination was especially quick, with Oscar Wilde publishing her poem “Legend of the Blush Roses” (and her father’s accompanying illustration) when she was just fifteen. In all of their collaborations, Walter seems to follow his daughter’s lead: “he does not attract unnecessary attention by telling part of the story through his picture”, writes Andrea Korda, “but instead allows Beatrice’s words to make meaning on their own.”

Originally serialized in Little Folks magazine, the processional months are personified as women, each of whom, in the published book, are followed by a calendar and a list of that season’s flowers (which, the backmatter reminds the reader, “may be had, freshly-cut each day, direct from The Floral Farms, Wisbeach”). December is much bleaker than the jolly Claus of King Luckieboy’s Picture Book: her “eyes grow sad / And fainter still her tread; / One hears a long, low sigh / Which tells the year is dead.” But January is full of hope and joy and new life. Notably, it is the only month where a child appears hand-in-hand with its elder. Beatrice was born to Mary Frances and Walter Crane in Rome, 1873, just months after her father conceived The Death of the Year.