Edgar Allan Poe may be known for his tales of the supernatural, but he had a remarkably analytical, even mathematical mind. He was extremely wary of romantic ideas of literary inspiration, claiming that, in writing “The Raven”, the work “proceeded, step by step, to its completion with the precision and rigid consequence of a mathematical problem.” And he had no love at all for his more romantically minded colleagues. He thought Emerson “over-rated” and once insulted the poets Cornelius Mathews and William Ellery Channing with an algebraic pun: if Mathews was “ex ecrable,” he said, Channing was “x plus 1-ecrable”.

Even a story as fanciful as “The Gold-Bug” originated in Poe’s obsession with logic. The plot is far-fetched: William Legrand, who has lost his family fortune, one day notices a golden beetle on the beach at Sullivan’s Island. He has his servant, Jupiter, wrap the bug up in a piece of parchment, on which he later discovers a coded message written in invisible ink, revealing the spot where Captain Kidd buried his treasure two centuries earlier. Once he has decoded this message, Legrand heads out with Jupiter — and their neighbour, who narrates the tale —to unearth the treasure, whose exact location he determines by ordering Jupiter to drop the bug through the left eye socket of a skull nailed to the end of a tree branch.

At this point the narrator, like the reader, is bewildered — “dying with impatience for a solution of this most extraordinary riddle”. But Legrand does not waste anyone’s time. He promptly gives a systematic explanation, several pages long, of how he discovered and decoded the secret message.

First, Legrand says, he determined the language of the message (English), before proceeding to ascertain the most and least frequently used characters. Since in English “the letter which most frequently occurs is e,” he substituted the most frequently used character in the coded message (8) with the letter e, then searched for a three-character combination ending in 8 (;48), which he guessed to represent “the” (the most common English word), and so on, until he had completely solved the centuries-old riddle — and become rich to boot. 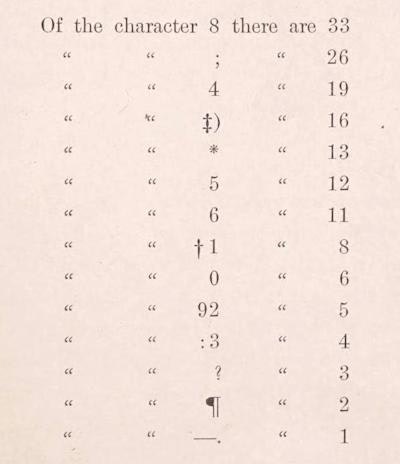 Legrand is very much acting as Poe’s mouthpiece here. In fact, most of Legrand’s explanation is paraphrased from articles on cryptography Poe had published in Alexander’s Weekly Messenger a few years earlier. Inviting readers to send him coded messages where, “in place of alphabetical letters, any kind of marks are made use of at random,” Poe pledged to decode every message “forthwith — however unusual or arbitrary may be the characters employed.” This is precisely what Poe proceeded to do. Over the next months, he solved somewhere between thirty-six and one hundred cyphers in the interest of proving his assertion — which Legrand also makes in “The Gold-Bug” — that “human ingenuity cannot concoct a cypher which human ingenuity cannot resolve”.

In doing this, Poe was not trying (merely) to wow people with his genius for solving ciphers; he was also trying to make a case for the primacy of logic. In his essay “A Few Words on Secret Writing”, published in 1841 — after he had become a minor celebrity for his cryptographic prowess — he outlined not only the history of cryptography but also the rational methods by which one could decode almost any text.

Eventually, Poe was — as he wrote the poet John Tomlin — obliged to swear off ciphers:

The reason…will be readily understood. Much curiosity was excited throughout the country by my solutions of these ciphers, and a great number of persons felt a desire to test my powers individually — so that I was at one time absolutely overwhelmed; and this placed me in a dilemma; for I had either to devote my whole time to the solutions, or the correspondents would suppose me a mere boaster… You will hardly believe me when I tell you that I have lost, in time, which to me is money, more than a thousand dollars, in solving ciphers, with no other object in view than that just mentioned.

Poe left his newspaper readers, in December 1841, with two final cryptographs, which he credited to one Mr W. B. Tyler. As far as anyone can tell, no one was able to solve these cryptograms until the 1990s, when American literature professor Terence Whalen and Canadian software engineer Gil Broza finally cracked their codes.

Yet one question remains unanswered even today: Who was W. B. Tyler? Poe himself? Or the rare cryptographer who could out-cryptograph Poe? Arguments on either side abound, as seems appropriate. However logical Poe may have preferred to be, he was no stranger to mystery.