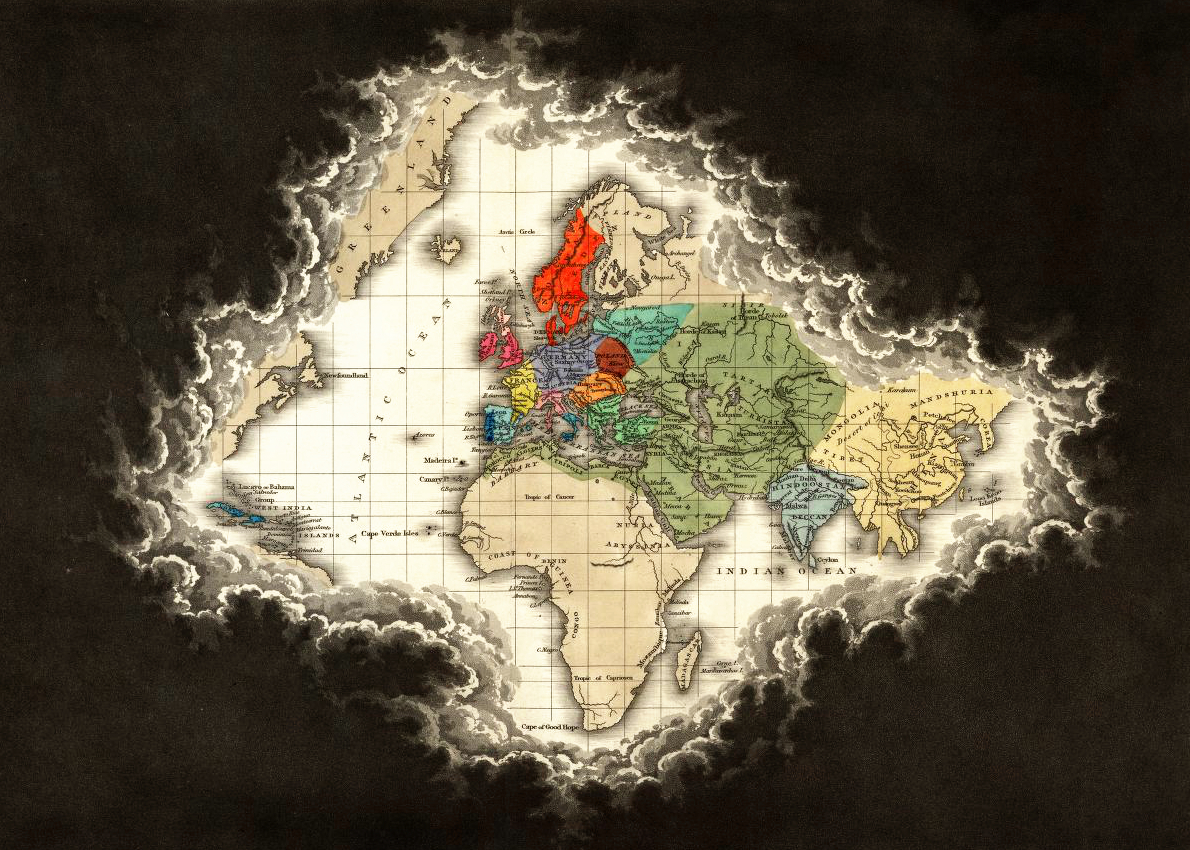 "Now when I was a little chap I had a passion for maps", says the seafaring raconteur Charles Marlow in Joseph Conrad's Heart of Darkness (1899). "At that time there were many blank spaces on the earth, and when I saw one that looked particularly inviting on a map (but they all look that) I would put my finger on it and say, 'When I grow up I will go there.'" Of course, these "blank spaces" were anything but. The no-man's-lands that colonial explorers like Marlow found most inviting (the Congo River basin, Tasmania, the Andaman Islands) were, in fact, richly populated, and faced devastating consequences in the name of imperial expansion.

In the same troublesome vein as Marlow, Edward Quin's Historical Atlas painted cartographic knowledge as a candle coruscating against the void of ignorance, represented in his unique vision by a broiling mass of black cloud. Each map represents the bounds of geographical learning at a particular point in history, from a specific civilizational perspective, beginning with Eden, circa "B.C. 2348". In the next map titled "B.C. 1491. The Exodus of the Israelites", Armenia, Assyria, Arabia, Aram, and Egypt form an island of light, pushing back the black clouds of unknowing. As history progresses — through various Roman dynasties, the reign of Charlemagne, and the Crusades — the foul weather retreats further. In the map titled "A.D. 1498. The Discovery of America", the transatlantic exploits of the so-called Age of Discovery force Quin to employ a shift in scale — the luminescence of his globe now extends to include Africa and most of Asia, but North America hides behind cumulus clouds, with its “unnamed” eastern shores peeking out from beneath a storm of oblivion. In the Atlas' last map, we find a world without darkness, not a trace of cloud. Instead, unexplored territories stretch out in the pale brown of vellum parchment, demarcating "barbarous and uncivilized countries", as if the hinterlands of Africa and Canada are awaiting colonial inscription.

Not much is known about Edward Quin, the Oxford graduate, London barrister, and amateur cartographer whose Atlas was published two years after his death at the age of thirty-four. We learn, thanks to Walter Goffart's research into historical atlases, that Quin's images were more popular than his words. The well-regarded cartographer William Hughes rescaled the maps for a new edition in 1846, discarding their artist's accompanying text. The Atlas' enduring technical advancement, which influenced subsequent cartographers, can be found in its ingenious use of negative space. Emma Willard's Atlas to Accompany a System of Universal History, for instance, features cloudy borders that seem very much indebted to Quin.

Looking back from a contemporary vantage, the Historical Atlas remains memorable for what is not shown. Quin's cartography inadvertently visualizes the ideology of empire: a geographic chauvinism that had little respect for the knowledge of those beyond imperial borders. And aside from depicting the reach of Kublai Khan, his focus remains narrowly European and Judeo-Christian. While Quin strives for accuracy, he admits to programmatic omission. "The colours we have used being generally meant to point out and distinguish one state or empire from another. . . were obviously inapplicable to deserts peopled by tribes having no settled form of government, or political existence, or known territorial limits". Instead of representing these groups, Quin, like his clouds, has erased them from view.

B.C. 323. Exhibiting The Empire Of Alexander.

B.C. 301. Exhibiting The Partition Of The Empire.

A.D. 1. The Roman Empire In The Augustan Age.

A.D. 476. The Dissolution Of the Western Empire.

A.D. 814. Exhibiting The Empire Of Charlemagne.

A.D. 912. Dissolution Of The Empire Of Charlemagne.