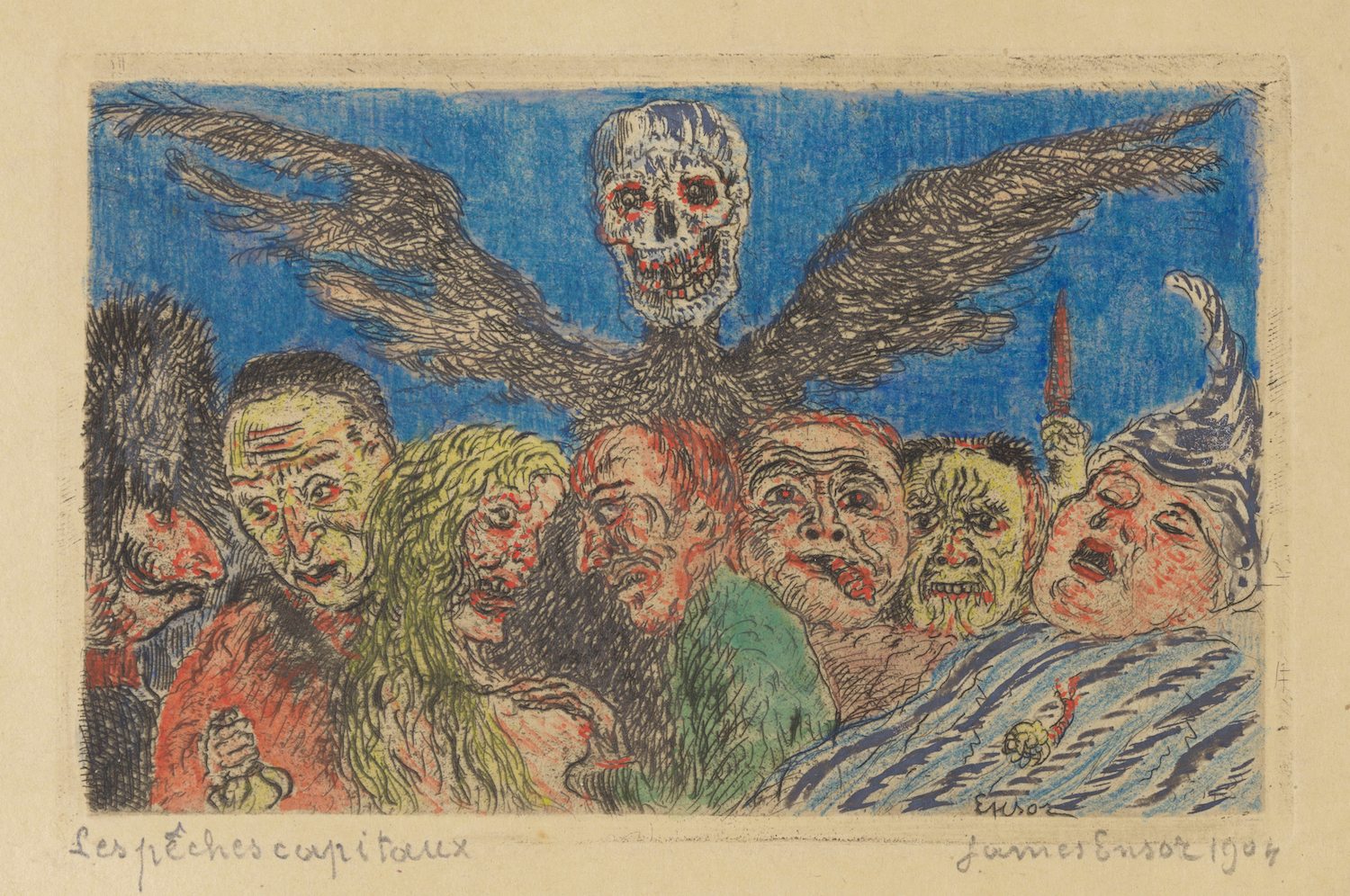 Perhaps no modern artist better exemplified the charge issued by Baudelaire in his 1862 essay “Painters and etchers” — “etching is a profound and dangerous art, filled with treachery, which reveals the faults of an artist’s mind as clearly as his virtues” — than James Ensor (1860–1949). Aside from an incomplete course of study at Brussels’ Académie Royale des Beaux-Arts, the institution he called an “establishment for the near-blind”, the artist spent the near entirety of his life in the coastal Belgian city of Ostend. Here he lived in his parents’ home into his late fifties, largely financed by his mother and aunt Mimi’s souvenir shop, which sold papier-mâché carnival masks, skeleton costumes, and Asian curios. His early realist and romantic paintings impressed critics, with Russian Music (originally titled Chez Miss) earning him a coveted showing in the 1882 Paris Salon. By the mid 1880s, however, much of his new work was unrecognizable, and his future, once full of promised renown, seemed abruptly foreclosed. A lifelong atheist, Ensor pivoted toward grotesque Christian imagery, not for its theistic content, but because it offered the best symbolic vocabulary for visualizing his growing disgust with the world. Once claiming that he had “anticipated all modern tendencies . . . in every direction”, he now saw, through the mockery of Christ, his own plight to be misunderstood.

It was at this time that Ensor fell in with Les XX — an avant-garde Belgian coterie — and began experimenting with printmaking, creating Christ Mocked, his first etching, in 1886. Asked why he had chosen the medium, Ensor replied that it offered protection against the infidelity of time, offering something like immortality through preservation:

The fragility of paintings frightens me, vulnerable as they are to the mishaps of the restorer, to general hazards, to the distortions of reproductions — I want to live, to speak for a long time yet to the men of tomorrow. I think of solid copper plates, of inks which cannot be altered, of simple reproductions, of faithful impressions, and therefore I have taken etchings as my means of expression.

By Louis Lebeer’s count, Ensor’s oeuvre contains 133 prints: 117 etchings, 14 drypoint intaglios, a single soft-ground etching, and a sole lithograph, illustrating a story by one of his favorite authors, Edgar Allan Poe. (This last figure does not take into account the many whimsical drawings on lithographic transfer paper for his ballet, La Gamme d’Amour.) And yet, Ensor’s output was cascadic instead of steady. Shortly after creating his 1904 album Les péchés capitaux (The deadly sins), Ensor more or less abandoned printmaking entirely, save for a series of works at a collector’s request in the 1930s.

Drafted in colored chalk and created and retouched over decades, beginning with Lust in 1888, The Deadly Sins are less moralizing depictions of vice, more personal chaffings against petit bourgeois life. In La Paresse (“sloth” or “laziness”), for example, Aunt Mimi has a lie-in while devils prick her jaundiced face and manipulate the hands of a bedside clock. Outside, scything workers harvest crops under the watch of a countenancing sun. The title’s allusion “can only be ironic”, thinks Susan M. Canning, a “sarcastic projection of Ensor’s prickly view of his familial circumstance”, for Aunt Mimi’s work ethic was anything but loafing. Gluttony makes La Grande Bouffe look like a light snack. A pair of men spew vomit while a skeletal butler readies the next course: crab, a lobster that seems to cling in defiance of death onto the tablecloth, and someone’s severed head. A painting behind the diners depicts figures doing possibly shameful things to pigs. Humor livens (though rarely lightens) these torturous scenes. In Wrath, a man bleeds from his eye sockets while a red panda stands on its hindlegs in surprise; the well-dressed woman of Pride fails to notice a giddy reaper playfully tussling her hair.

Drawing on his father’s ancestry, Ensor glossed his satirical etchings as English in inspiration, influenced by caricaturists such as William Hogarth, Thomas Rowlandson, and James Gillray, and went so far as to write, in a letter to Pol de Mont of October, 1900, “I feel more English than most of the English artists now slavishly imitating the early Italians.” Unlike his paintings of the late 1800s, which revel in phantasmagoric hellscapes, such as Tribulations of Saint Anthony (1887), and communicate an enduring interest in crowds, as in Christ’s Entry Into Brussels in 1889, The Deadly Sins all focus on small groups and seemingly domestic spaces. The largest and, at first glance, tamest ensemble appears in Envy, where a group of grotesque figures — faces inspired, perhaps, by his family’s stock of masks — stare fixedly upon a breastfeeding woman. Even Ensor’s supporters found some of these themes outlandish. Eugène Demolder, one of his Brussels compatriots and an early critical champion, wrote from Paris with brusque candor: “Your caricatures are not at all appreciated. People find them puerile and common.” The symbolist Emilie Verhaeren offered a different take: “[Ensor] acts as a dilettante of the impossible rather than as an avenger of vice or a master of virtue. He engenders horror elsewhere: He delineates it within himself.”

Only in 1917, after the death of his mother and aunt, did Ensor leave his parents’ house, moving to a residence across the street that he inherited from an uncle, which also had a curio shop on the ground floor. Always a theme in his artwork, toward the end of his life Ensor turned his attention to music, composing only in minor scales as he refused to play the white keys of his harmonium. In August de Boeck’s words, “Ensor knows absolutely nothing about musical technique, but he is a musician.” In 1942, a Belgian radio program broadcast news of his death, even though Ensor would continue to live for a half-decade more, almost reaching the age of ninety. “I am mourning myself”, he would frequently joke in the intervening years.