Knud Rasmussen (1879–1933), the child of a Danish missionary, grew up in western Greenland among the Kalaallit people, whose culture fascinated him from an early age. As a child, he learned to speak their language and, as he grew older, also learned from them how to hunt, drive dog sleds, and survive in harsh arctic weather. After a brief and not very successful career as an actor and opera singer in Denmark, Rasmussen returned to to the polar regions as an explorer and anthropologist, writing travelogues and ethnographies including the highly popular People of the Polar North (1908). By the end of his life, he was known as the “father of Eskimology”.

The translator W. W. Worster’s claim, in his introduction to Rasmussen’s Eskimo Folktales, that “No man is better qualified to tell the story of Greenland, or the stories of people” will rightly raise some eyebrows today. Yet, all things considered, Rasmussen appears to have been both familiar with and relatively respectful of the people he called “Eskimos” (an Algonquin word for their neighbors to the north not typically used by Inuit people). His collection of their tales, “taken down from the lips of the Eskimo story-tellers themselves”, offers a fascinating glimpse into a complex culture.

Many of the stories in Eskimo Folktales revolve around adventures. “The Two Friends who Set Off to Travel Round the World”, for example, recounts the epic voyage of two men who, together with their wives, set off in opposite directions to see the globe, hoping they’ll eventually meet again:

It took a long time to get round the world; they had children and they grew old, and then their children also grew old, until at last the parents were so old that they could not walk, but the children led them.

At last, one fateful day, they all meet up — “and of their drinking horns there was but the handle left, so many times had they drunk water by the way, scraping the horn against the ground as they filled them.” Elderly and wise now, all the two friends can say to each other after all these decades of traveling is: “The world is great indeed”.

As in most collections of folktales the world over, there are a good number of stories about human encounters with the nonhuman: “The Woman who Had a Bear as a Foster-Son”, “The Insects that Wooed a Wifeless Man”, “When Ravens Could Speak”, “The Raven who Wanted a Wife”, “The Man who Took a Vixen to Wife”, “The Man who Became a Star”. There are also a good number of stories about supernatural phenomena, including creation myths (“How the Fog Came”) and journeys to the underworld (“Qalagánguasé, who Passed to the Land of Ghosts”).

More than a few of the stories combine these two themes — and some of these are outright terrifying. “The Boy from the Bottom of the Sea who Frightened the People of the House to Death” begins:

Well, you see, it was the usual thing: “The Obstinate One” had taken a wife, and of course he beat her, and when he wanted to make it an extra special beating, he took a box, and banged her about with that.

One day, when he had been beating her as usual she ran away. And she was just about to have a child at that time She walked straight out into the sea, and was nearly drowned, but suddenly she came to herself again, and found that she was at the bottom of the sea. And there she built herself a house.

Below the sea, the woman gives birth to a boy, whose eyes are jellyfish, whose hair is seaweed, and whose mouth looks like a mussel. Although she is terrified of her progeny, she raises him underwater, until eventually he pleads with her to be allowed to go to the surface. She agrees, but only if he’ll go to the house whose inhabitants refused to take her in when she used to run away from his brutal father, who died long ago. The boy does as she tells him (“be sure to look as angry as you can”), and frightens everyone inside to death.

Another terrifying cautionary tale, “Artuk, who Did All Forbidden Things”, tells of a widower who refuses to bide by tradition. He butchers frozen meat while in mourning, shakes out his inner coat on the ice, and drinks water that’s melted from an iceberg: “And all these things he did in scorn of that which his fellows believed. For he said it was all lies.” One day, however, when he is about to go out hunting, he feels afraid — and for good reason. His dead body is found the next day, “far out on the ice, torn to pieces, as is the way with those whom the spirits have punished for refusing to observe the customs of their forefathers”.

There are a few more lighthearted stories — for instance “When the Ravens Could Speak”, which begins:

Once, long ago, there was a time when the ravens could talk. But the strange thing about the ravens’ speech was that their words had the opposite meaning. When they wanted to thank any one, they used words of abuse, and thus always said the reverse of what they meant.

But the real attraction of the Eskimo Folktales is their darkness and their directness — a combination that, Worster says, gives these Greenlandic storytellers “a place among the poets of the world”.

In addition to the tales, the book also boasts numerous illustrations by various unnamed "native Eskimo artists", which we've included in the gallery below. 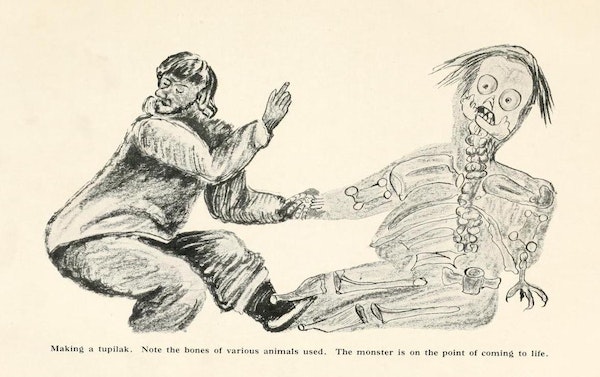 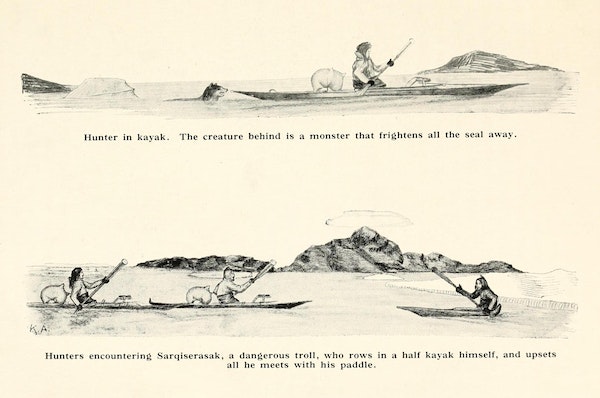 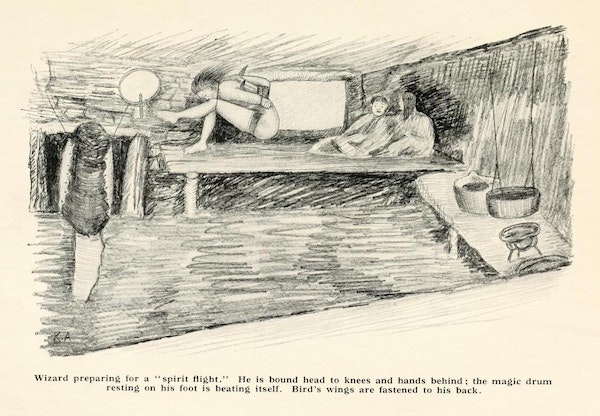 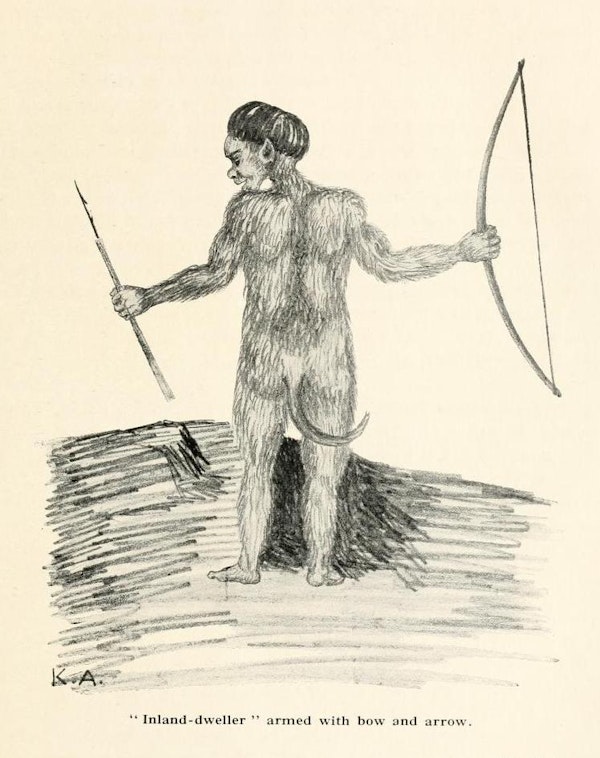 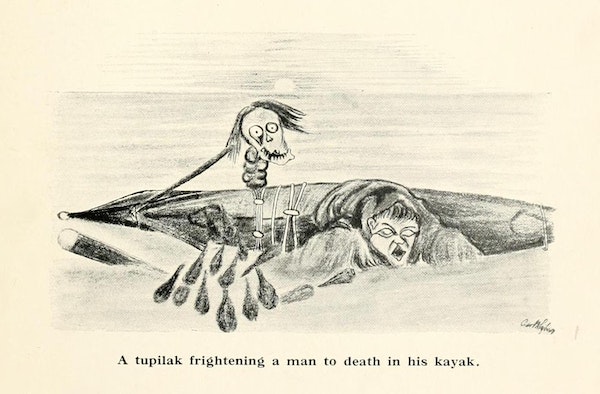 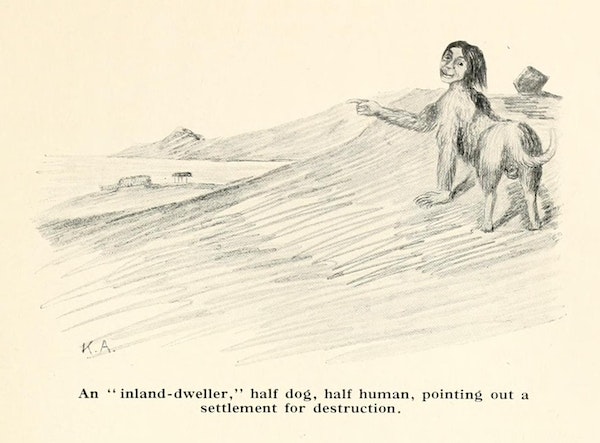 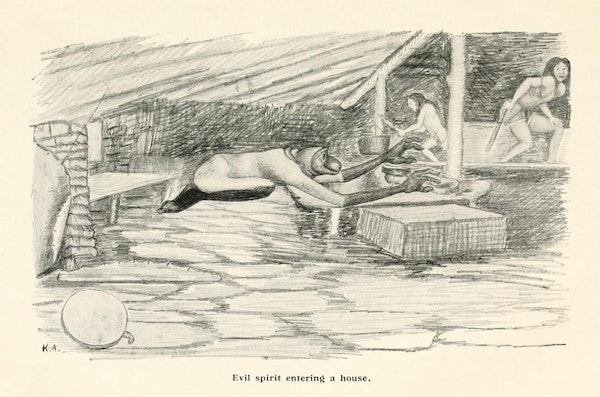 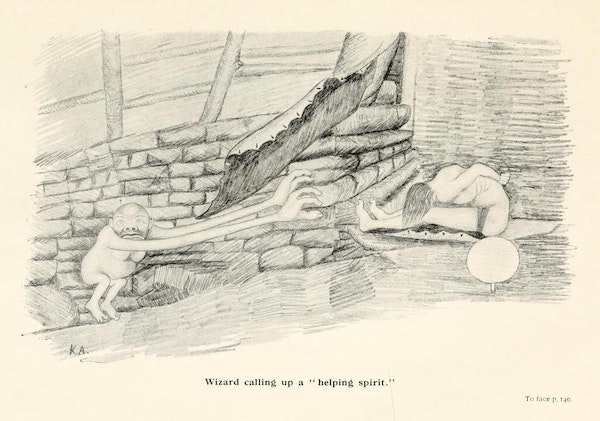 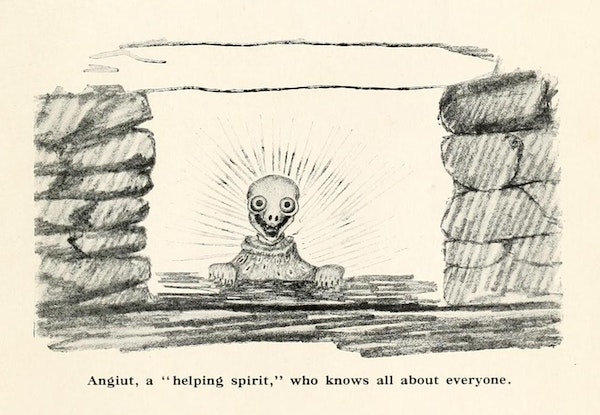 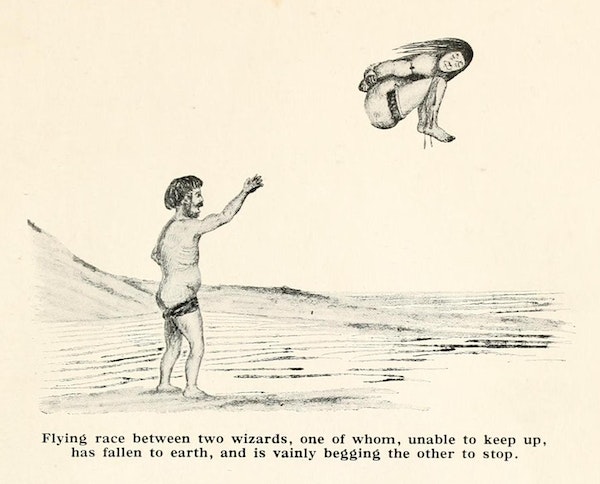