Great revolutions were stirring in Paris during January 1789: Abbé Sieyès published his incendiary pamphlet Qu’est-ce que le tiers-état? (What is the Third Estate?), and from the study of “M. Etteilla, Professeur d’Algebre” at 48 Rue de l’Oseille, a letter was sent applying for a patent to print a French edition of Livre de Thot, which promised to reveal the theory and practice of ancient Egyptian magic through Tarot. By July, when the French Revolution began with the storming of the Bastille fortress, scores of Parisians were already turning to Etteilla’s cards to divine the fate of France.

Engraved by Pierre-François Basan, the luxury edition of Etteilla’s tarot deck contained seventy-eight brush-colored cards and included a specially designed carrying case. Even in its cheaper, uncolored iteration, this deck was radically different from the many Tarot de Marseilles permutations that had appeared over the previous centuries. Etteilla — pseudonym of French occultist Jean-Baptiste Alliette (1738–1791) — founded an organization specifically dedicated to the study of the esoteric Tarot, La Société des Interprètes de Thot, which promulgated the systematic integration of Tarot and astrology, thus refashioning the tarot deck as a tool for spiritual and mundane divination. Etteilla was the first to give divinatory meanings to cards and spreads. And some historians consider him the first person to earn a living as a professional tarot reader. 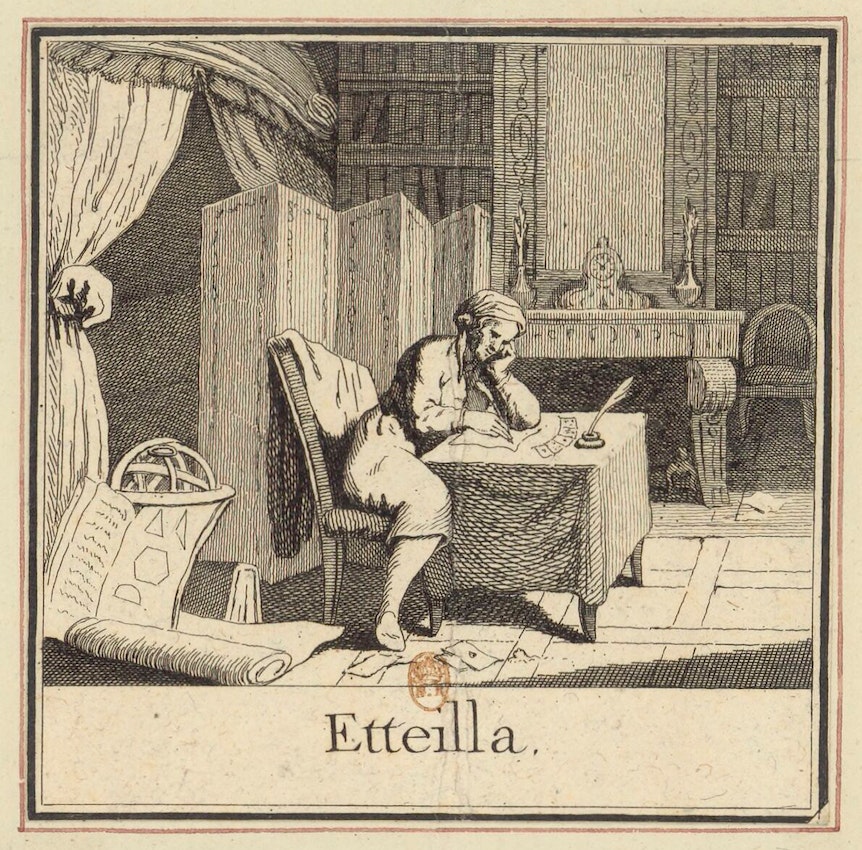 To merge the two ancient sciences, Etteilla assigned zodiacal constellations first to the seven stages of Creation (culminating in Card 7, “Rest” — its illustration looking like a scene built up out of Baron Cuvier’s paleontological finds in the Paris basin) then to Cards 8 (a woman encircled by eleven rings) through 12 (La Prudence, a sandaled, caduceus-bearing goddess paused before a serpent). Though many of Etteilla’s cards are clearly recognizable as reproducing the Trumps from the Tarot of Marseilles, the order of the cards (which proclaims to mirror a symbolic syntax discovered on the walls of the Temple of Memphis), individual details, and the astrological associations are altogether novel. Though he does not explain his method for assigning correspondences, it appears that Etteilla drew upon the mystical, Hermetic text Pymander for his picture of the Cosmos and its creation. 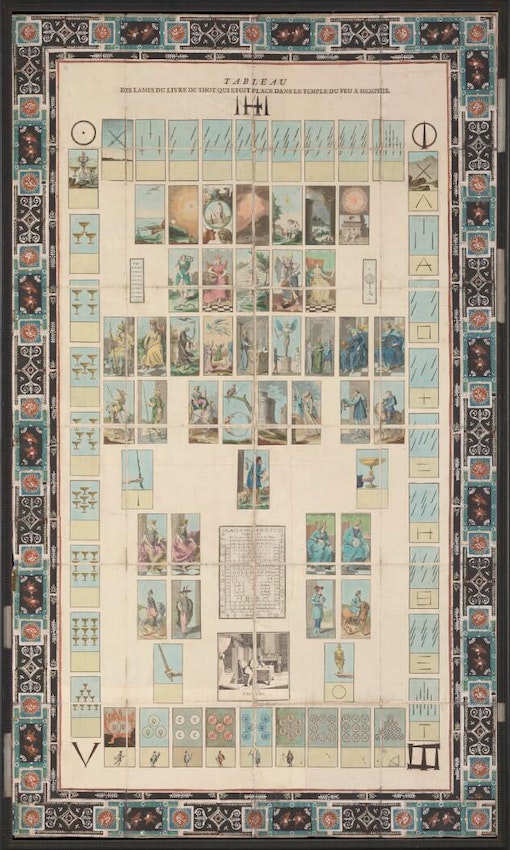 A framed arrangement of Etteilla's tarot deck, held by the Wellcome Collection, “in the form of leaves of the book of Thoth placed in the temple of Fire at Memphis, Egypt” — Source.