Between Frogs and Gods: Illustrations of Physiognomy 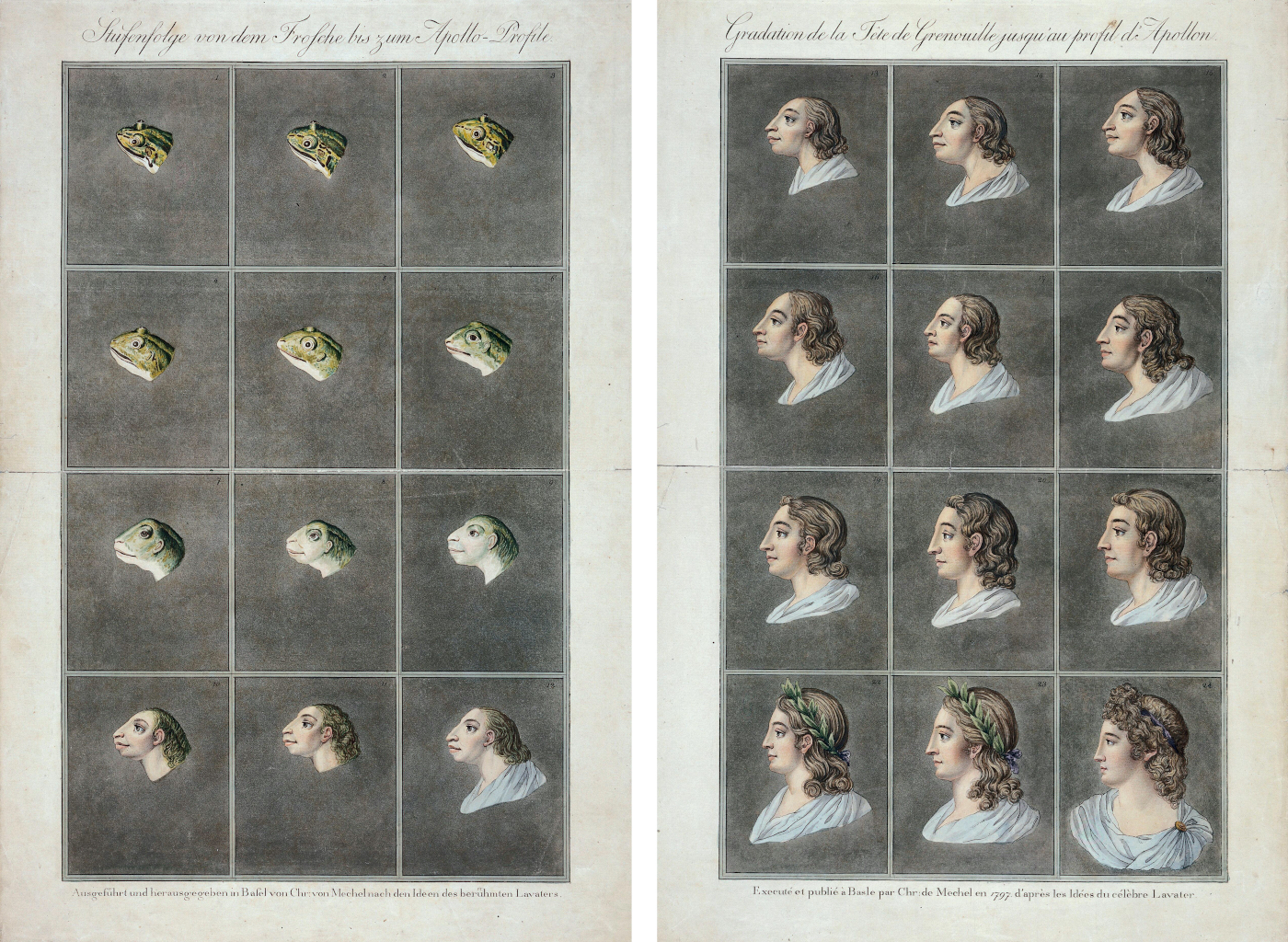 Coloured etchings by Christian von Mechel showing “stages from the frog to the profile of Apollo”, after the ideas of Johann Caspar Lavater, 1797 — Source

For many of us, the image of a frog evokes feelings which fall anywhere between utter ambivalence and mild fondness. The common frog is neither fearsomely feral, nor an affectionate family pet. Children chase them, princesses kiss them, and backyard swimmers rescue them from drowning in pools. For Johann Caspar Lavater (1741–1801), however, frogs are “the swollen representative of a disgusting bestiality”, and a manifestation of true “satanical hideousness and malignity”. In light of these epithets, one might wonder, what did the frog do to deserve such scathing description? In Lavater’s understanding, the frog’s fault resides in the angle of its forehead.

The etchings above, commissioned by Lavater from the Swiss printmaker Christian von Mechel (1737–1817), put the physiognomist’s ideas into color and motion. Across twenty-four frames, the profile of an unassuming amphibian slowly metamorphs into that of Apollo (considered the epitome of masculine beauty). At its core, Lavater’s physiognomy relies on the belief that a creature’s true character and morality can be discerned from their “lines of countenance”, often revealed by analyzing silhouettes. In many ways, he spent his career trying to offer scientific proof of the ancient Greek concept known as kalokagathia — that goodness manifests as beauty, evil as ugliness — the focus of his greatest-known work, the four-volume Physiognomische Fragmente (1775–1778).

The frog-to-Apollo images, and the text they illustrate (“Ueber die Animalitäts-Linien”), didn't feature in the original German edition of Lavater’s treatise, but plans were made to include it as a supplement to the much delayed French edition of the final volume. It seems Lavater had an idea for the amphibian sequence as early as 1777, the date given to a copperplate engraving (likely by Lavater himself) found in his collection, but it wasn't until the 1790s that things were readied for publication. Lavater commissioned etchings from Mechel in 1795 (seemingly based on this earlier copperplate engraving), but he was ultimately dissatisfied with Mechel's efforts (and price) and rejected them. 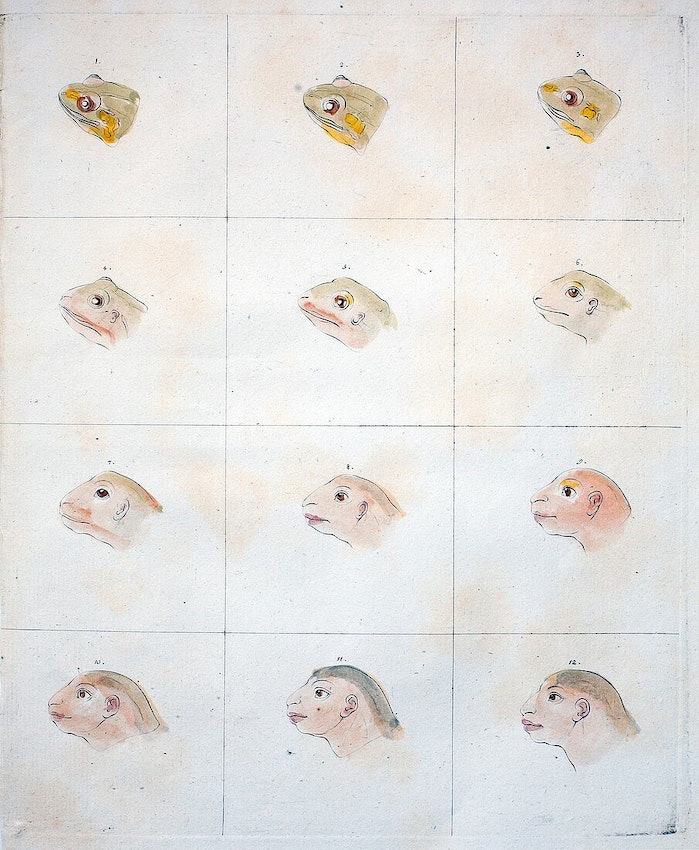 Copperplate engraving of the first half of the frog-to-Apollo sequence, dated to 1777 — Source

Lavater would die before the frog-to-Apollo text with accompanying images finally made it into print, first in an 1802 collection of unpublished writings, and then in the long awaited French fourth volume published the following year. In both of these versions we see simple line renditions — much closer to the 1777 engraving than Mechel's interpretation. The frog-to-Apollo motif also crops up in additional unattributed images, such as the series of twenty-four small-format watercolors by an anonymous draftsman held at the Österreichische Nationalbibliothek (dated to 1795, reproduced at the end of this post), and others that David Bindman found, during research for Ape to Apollo, in the Lavater's “Kunstkabinett” — a personal archive of more than 22,000 portraits. 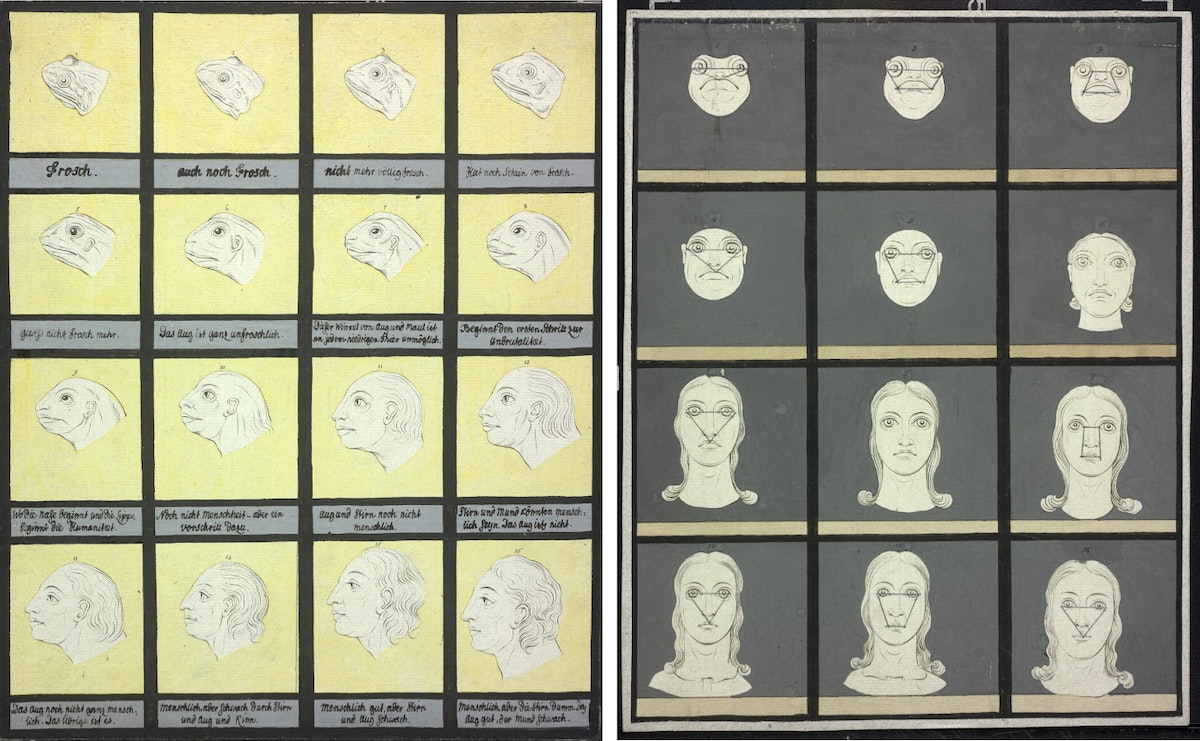 Undated variations of the frog-to-Apollo series found in the Lavater Collection. The image on the left, which utilises a 4 x 4 grid, has an end point of a male head (rather than Apollo) and includes descriptions in Lavater's own hand. The image on the right shows a front view and the end point of a female head, a view also included in the 1802 and 1803 printed versions — Source.

While these images of the human emerging from the animal might, at first glance, seem to anticipate Darwinian theories of evolution, Lavater was, as Bindman comments, “a Protestant preacher fervently hostile to Enlightenment thinking and to anything that would suggest a continuum between the animal and the human”. (Darwin, on the other hand, owned a well-read version of Lavater's writings.) For Lavater, the series of images leading from frog through “primitive man” to Grecian god, demonstrated rigid and unchanging taxonomic divisions between humans and animals, and also between some humans and other (in his view) lesser humans.

Like the ancients before him, Lavater believed that, after careful examination, the disposition of every human and animal would reveal itself through the proportions of the head. In his writings, the angle of the neck corresponds to sincerity; the chin to sensuality; and the lips to a mixture of anger, love, or hate. Small nostrils are notorious for denoting timidity, and the bridge of the nose speaks to tranquility versus brute strength. However, the most important appears to have been the angle of the forehead. Invoking the work of Pieter Camper, a Dutch anatomist dedicated to studying facial angles across species, Lavater explains how the twenty-five degree angle of the frog's head increases to a roughly seventy degree angle in the head of a man. Compounded with the belief that, “of all earthly creatures, man is the most perfect”, Lavater linked this vertical visage to intelligence and wit, as well as “the transition from brutal deformity to ideal beauty”. In a fascinating twist — or perhaps a Protestant cringe at classical polytheism — Lavater also notes that many Greek gods and heroes are depicted as having dramatically protruding foreheads, with angles of up to one-hundred degrees. This extreme physiognomy may be demonstrative of their divinity, but it is “not naturally beautiful, not truly human”.

While Lavater may have believed that “man is the most perfect”, he did not believe that all races were equal within that perfection. He writes that while the European forehead is “most beautiful”, averaging around eighty degrees, the average Chinese forehead is seventy-five, and an angle “below seventy degrees gives the countenance of the negro of Angola and the Calmuc; and by a further diminution soon loses all trace of resemblance to humanity”. In tying certain spiritual, intellectual, or moral capacity to the shapes of heads and faces — with the ideal echoing his own visage — Lavater's ideas are inseparable from the history of scientific racism and the emerging frameworks of racial categorization in the late eighteenth-century. Backed by an anthropocentric belief that non-human species are foul and unintelligent, physiognomists such as Lavater weaponized the face to create a racial hierarchy, ranking non-Europeans much nearer to the realm of “satanical” animality. As the title of Richard T. Gray's 2004 study implies, About Face: German Physiognomic Thought from Lavater to Auschwitz, physiognomy set in motion a mode of profiling and differentiating human bodies that enabled some of the most horrific events in modern history.