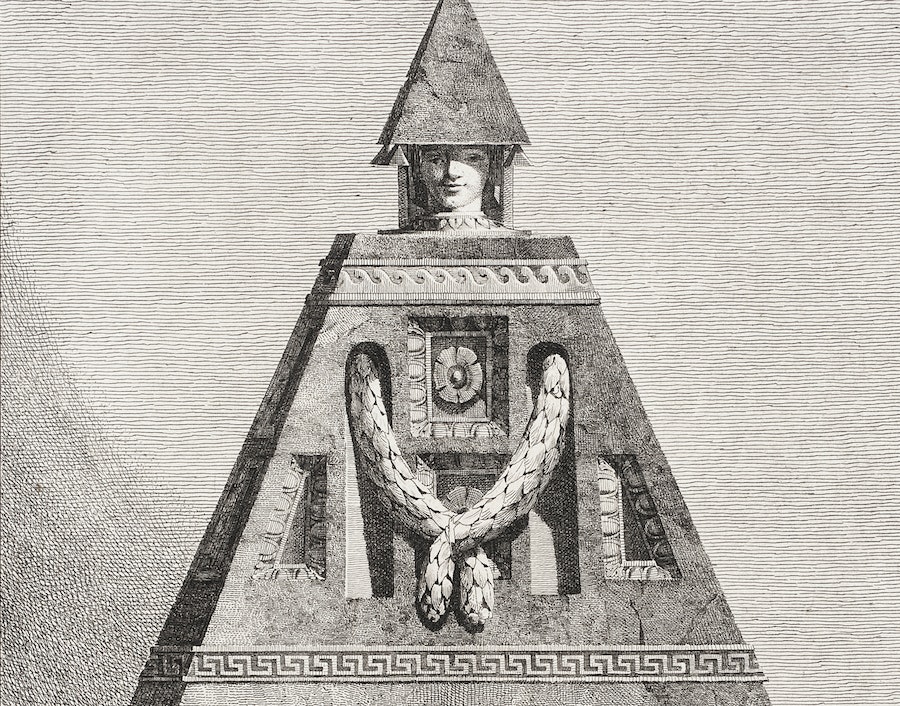 The shepherdess and shepherd, the bride and groom, the priestess and monk, and the sutler and grenadier: these are the characters of the Mascarade à la Greque, a parade of fantastical, architectural outfits from the imagination of French artist Ennemond Alexandre Petitot (1727-1801), who appears himself in the final image in the guise of a bespectacled architect.

Although Petitot was indeed Court Architect at Parma from 1753, these designs — etched and published by Benigno Bossi — are, of course, neither plans for buildings, nor sketches for actual garments. Rather, the Mascarade is Petitot's way of poking fun at the prevailing fashion for the goût grec, or “Greek taste”, that flourished in France in the 1750s. A reaction to the ornamental excesses of the Rococo style, the goût grec ushered in the neoclassical style, and is characterised by forms such as acanthus leaves, pilasters, Ionic scrolls, and meander patterns. Petitot takes this style to a ridiculous extreme, in which humans and their clothing morph into objects: shoes become bricks, elbows in sleeves are angled pediments, the sutler's stomach is her oven. This application of the goût grec into the human body is Petitot's take on fashion gone mad; it's his badinage, his little joke, as he explains in one introduction to the designs.

Petitot's Parma was a Francophile centre for decorative arts, under the influence of the Marquis of Felino. In other versions of the Mascarade at the Cleveland Art Museum and the Metropolitan Museum of Art, the Marquis is the dedicatee, but by the LACMA version pictured here, the avis explains that in order not to "harm his modesty", his name has been removed from the dedication. One suspects that the Marquis' impending fall from Hapsburg favour might also have played a role in this change.

The Met's version of the Mascarade appears in a volume along with other collections of Petitot's designs for vases and fireplaces. You can compare his plans for a vase held by lions, with its translation into a tangible object in ormolu and porphyry, auctioned by Christies. Petitot's Mascarade costumes, in contrast, were never meant to be realised. As curator Femke Speelberg says in her two-minute video for the Met's 82nd & Fifth series, the images in the album are ”masterpieces of ingenuity that display the human inclination towards fantasy”. 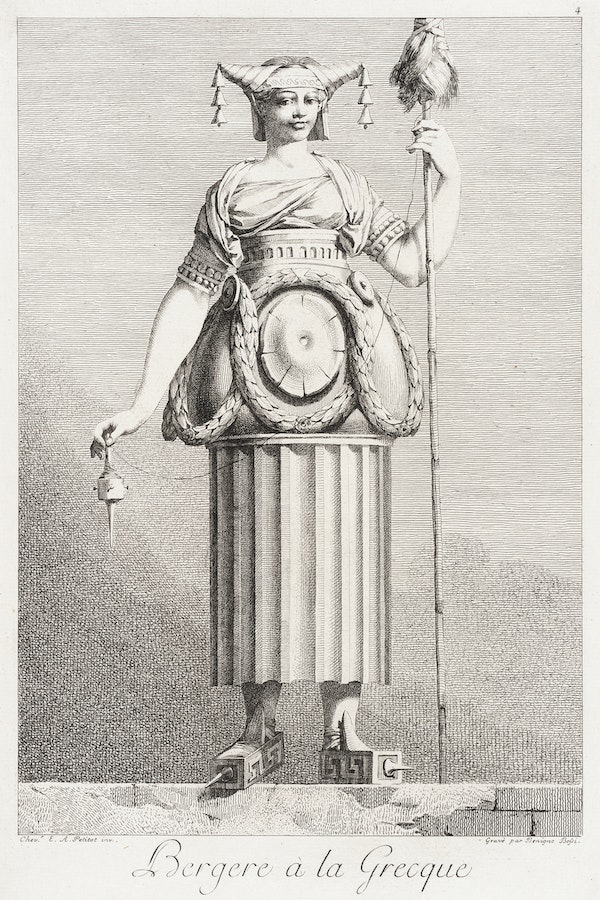 Shepherdess in the Greek Style 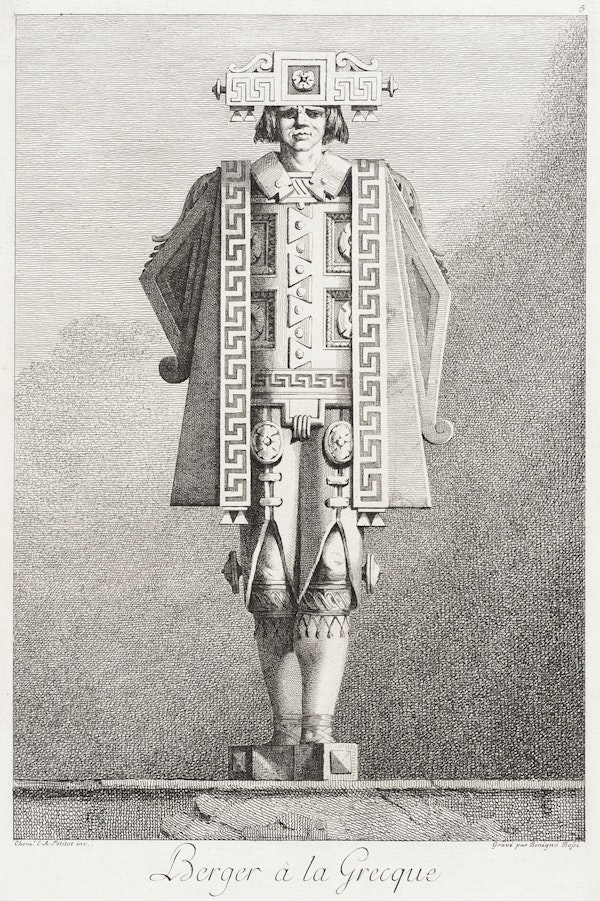 Shepherd in the Greek Style 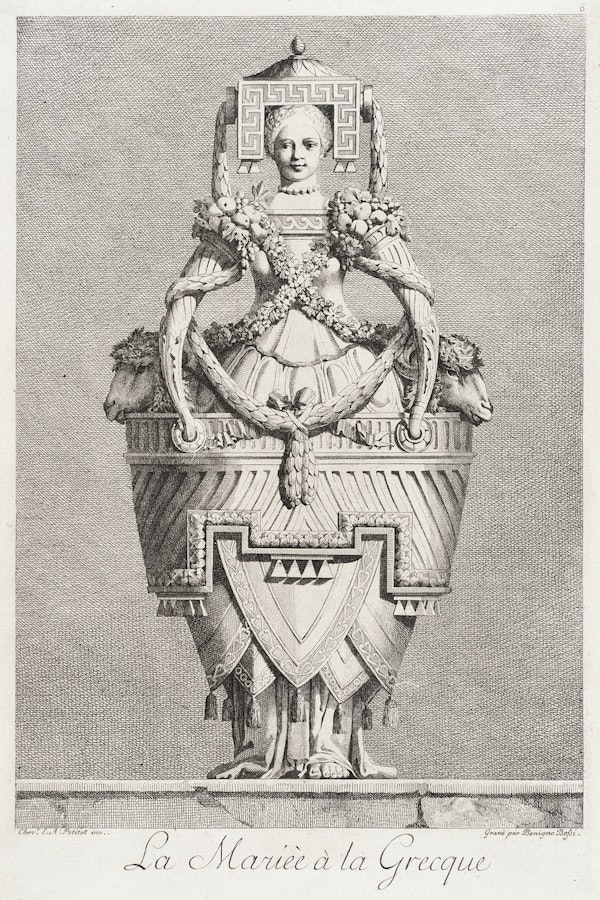 Bride in the Greek Style 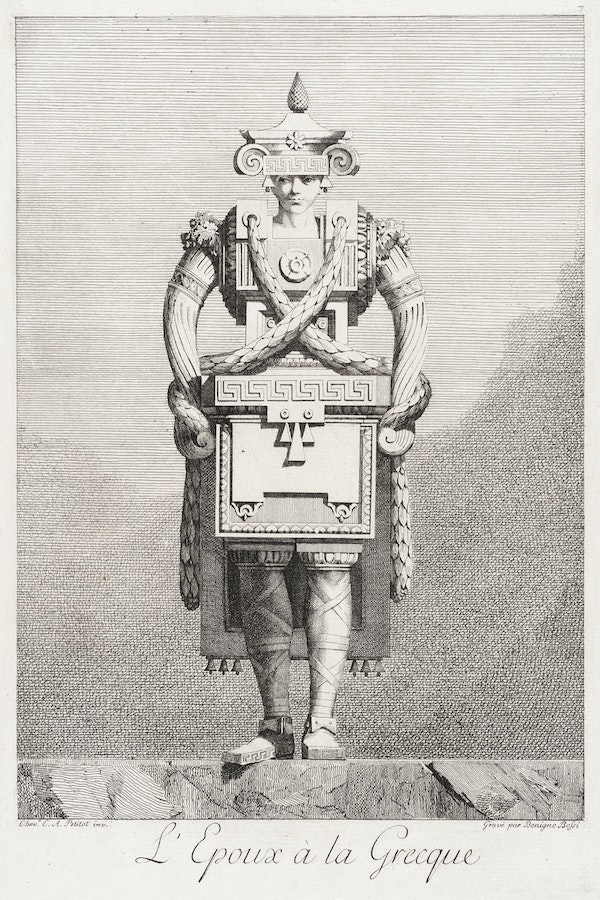 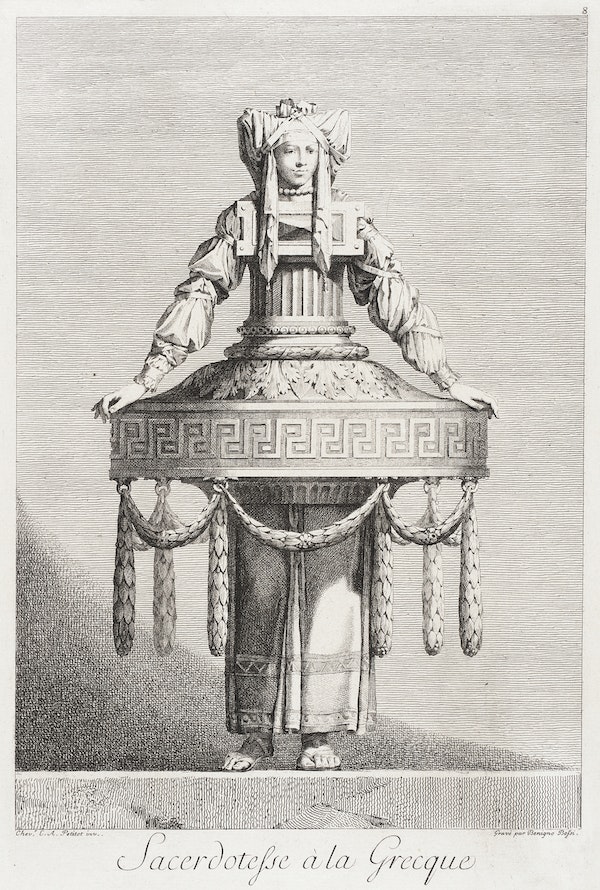 Priestess in the Greek Style 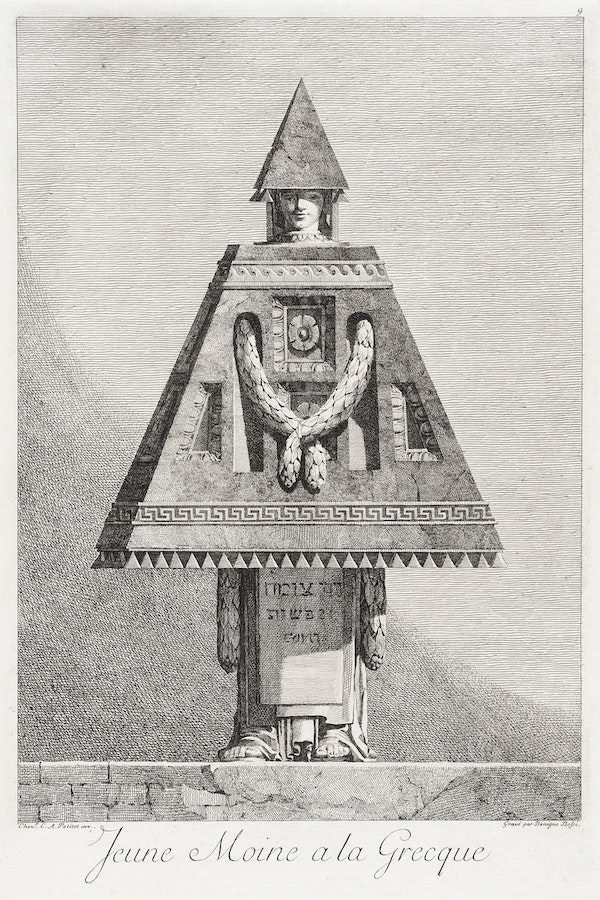 Young Monk in the Greek Style 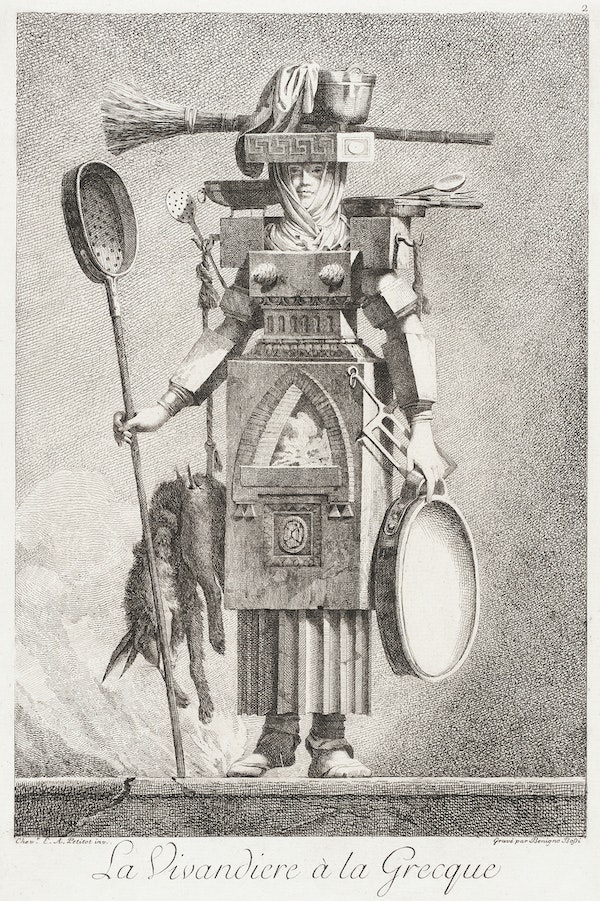 Sutler in the Greek Style 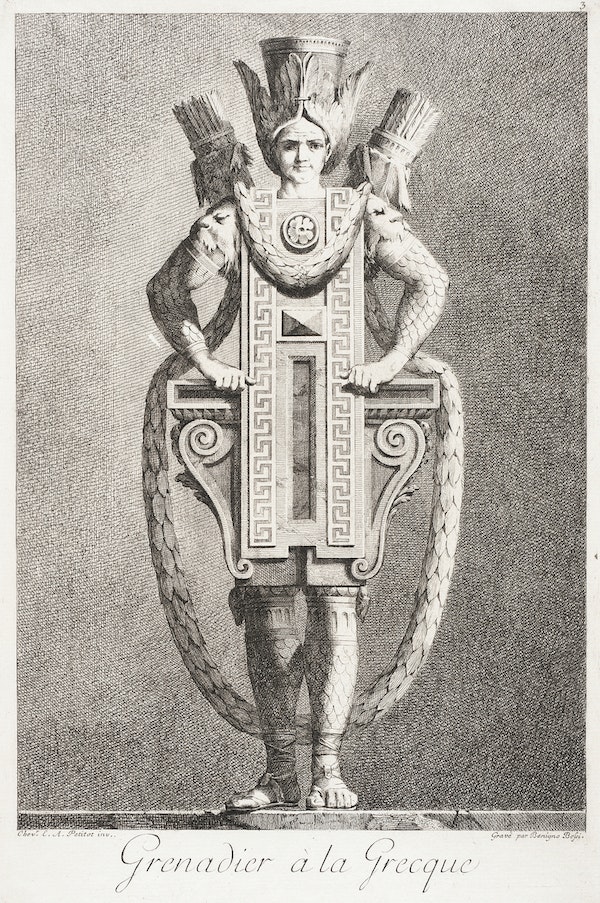 Grenadier in the Greek Style 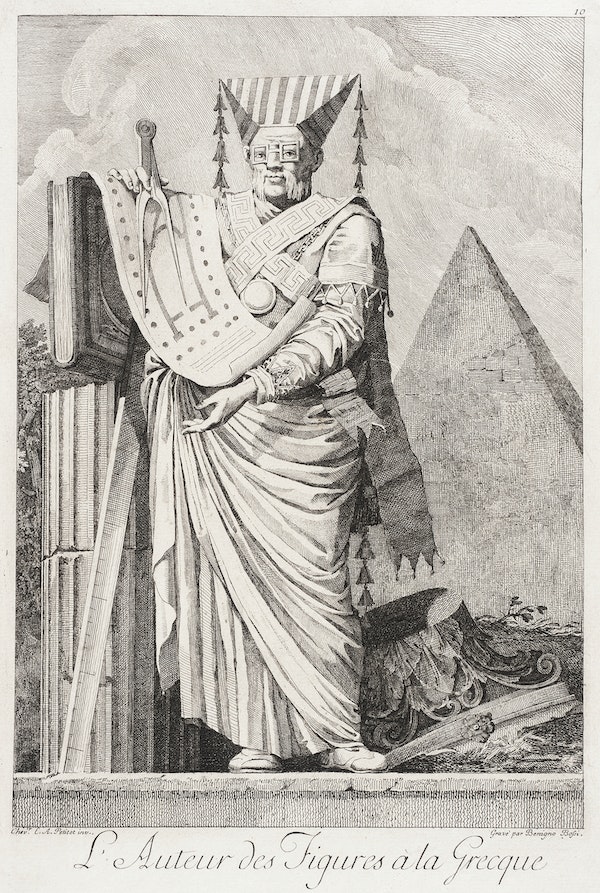 Author of the Figures in the Greek Style