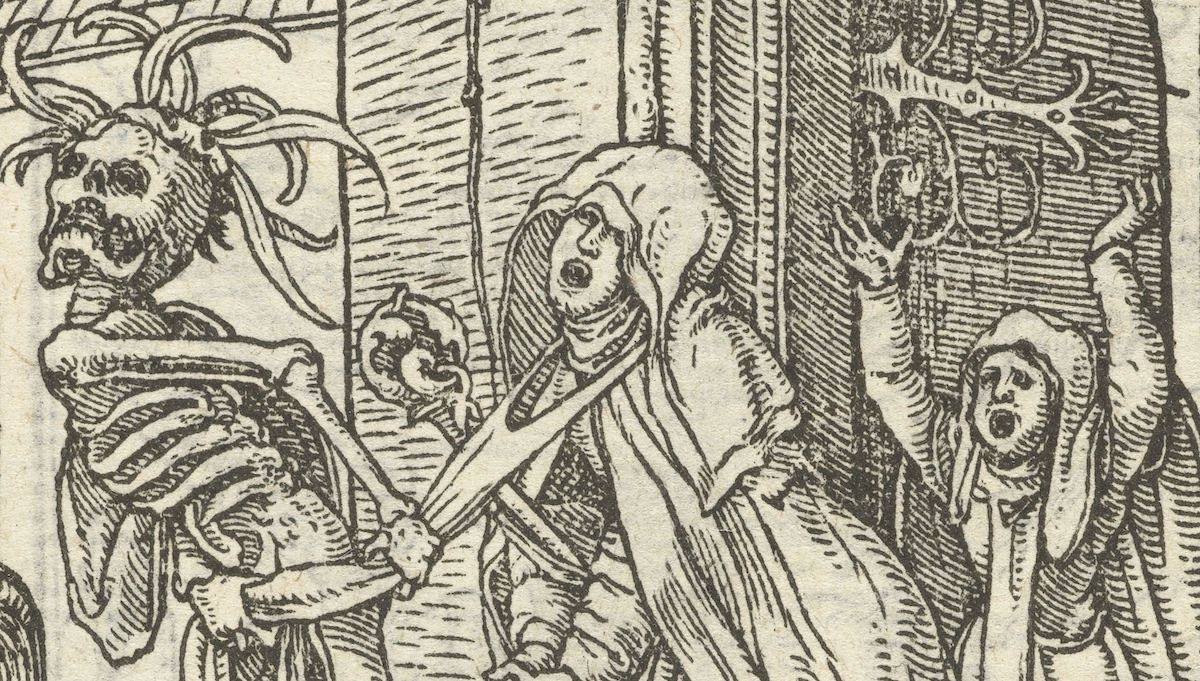 The Dance of Death by the German artist Hans Holbein (1497–1543) is a great, grim triumph of Renaissance woodblock printing. In a series of action-packed scenes Death intrudes on the everyday lives of thirty-four people from various levels of society — from pope to physician to ploughman. Death gives each a special treatment: skewering a knight through the midriff with a lance; dragging a duchess by the feet out of her opulent bed; snapping a sailor’s mast in two. Death, the great leveller, lets no one escape. In fact it tends to treat the rich and powerful with extra force. As such the series is a forerunner to the satirical paintings and political cartoons of the eighteenth century and beyond. For example, Death sneaks up behind the judge, who is ignoring a poor man to help a rich one, and snaps his staff, the symbol of his power, in two. A chain around Death’s neck suggests he is taking revenge on corrupt judges on behalf of those they have wrongfully imprisoned. In contrast, Death seems to come to the aid of the poor ploughman, by driving his horses for him and releasing him from a life of toil; the glowing church in the background implies this old man is on his way to heaven.

Holbein drew the woodcuts between 1523 and 1525, while in his twenties and based in the Swiss town of Basel. It would be another decade before he established himself in England, where he painted his most enduring masterpiece The Ambassadors (1533), in which two wealthy, powerful and worldly young men stand above (and oblivious to) an anamorphic skull that signals the ultimate vanity of all that wealth, power and worldliness. In the 1520s, Holbein was busy trying to earn a living in Basel, painting murals and portraits, designing stained glass windows, and illustrating books. The year before he began The Dance, he had illustrated Martin Luther’s influential translation of the New Testament into German. So Holbein was working close to the heart of the accelerating movement for Church reform. It comes as little surprise, then, that Death reserves particularly grim treatment for members of the Catholic clergy. It drags off a fat abbot by his cassock, leads an abbess away by the habit as though she were an animal, and takes the form of two skeletons and two demons to see to the pope himself.

Holbein’s woodcuts were a highly original take on a medieval theme. Death had first been seen dancing in Europe in 1425, on a mural at the Paris Cemetery of the Holy Innocents. From there it had jigged its way across Europe, onto more walls (including two in Basel cemeteries) and book reproductions of them. In Holbein’s series no one is actually engaged in a dance with Death. This removes an element of comic catharsis found in the mutuality of earlier dances. Holbein’s more static figures respond to Death realistically. The old man is stoical. The panicked knight fights with all his useless might. The rich miser throws up his arms in a mix of outrage and terror. The peddler is almost too busy to even acknowledge his time has come.

Holbein’s achievement is the greater because of the miniature scale he was drawing in. Reproductions obscure just how tiny the wooden blocks were — no bigger than four postage stamps arranged in a rectangle. The blocks were cut by Hans Lützelburger, a frequent and highly skilled collaborator of Holbein’s. Lützelburger had cut forty-one blocks and had ten remaining when Death surprised him too. The blocks were then sold to creditors, and eventually printed and published for the first time in Lyons in 1538 as Les simulachres and historiees faces de la mort. Since the book's great success Holbein’s series has been consistently in print, inspiring writers and artists from Rubens in Flanders, to Millet in France, and Dickens in England. Penguin Classics recently published an excellent edition which includes much helpful historical context from Ulinka Rublack.