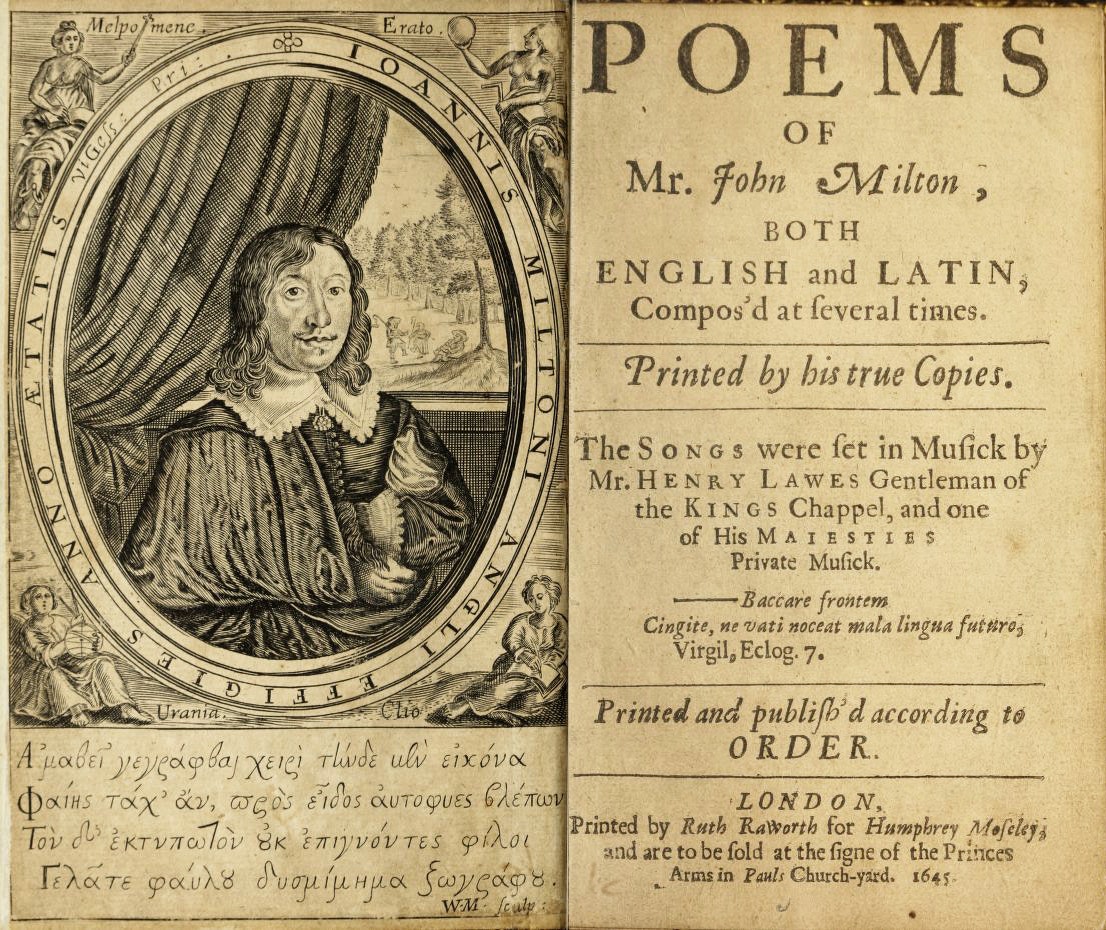 When John Milton’s publisher insisted that he include a portrait in his first collection of poetry — Poems of Mr. John Milton (1645) — he called on the services of the prolific engraver William Marshall. Milton was thirty-seven and had that year begun losing his sight. He would however not be blind for another seven years and could see well enough that the resulting frontispiece was appalling. Comparison with other Milton portraits suggests that Marshall supplied the poet and polemicist with an overly large nose, extra greasy hair and puckered lips. Milton got his own back with an erudite joke. Underneath the frontispiece he had Marshall painstakingly engrave a scathing appraisal of it in a language he clearly could not understand, Greek:

Looking at the form of the original, you could say, perhaps, that this likeness had been drawn by a rank beginner; but, my friends, since you do not recognize what is pictured here, have a chuckle at a caricature by a good-for-nothing artist.

Although Marshall did not know Greek, he likely could make at least some sense of Latin, which makes another aspect of the portrait surprising. Surrounding its oval border is a Latin description, “John Milton, Englishman pictured at age twenty-one.” Yet the face peering out looks much nearer forty than twenty. Was Marshall too inept or perhaps rushed — working as he was during the Civil War when engravers were in short supply — to imbue his subject with youth? Or was was he perhaps simply having a laugh at the expense of a poet past his physical prime? To round off the lamentable frontispiece, the four muses in its corners all look like they’d very much rather be somewhere else.

When Milton brought out an updated version of his Poems in 1673, he saw fit to remove the frontispiece entirely, although not his literary insult. Appearing in the main body of the book, still in the original Greek but now under the title “In Effigiei ejus Sculptorem” (On the Engraver of his Portrait), his barb at Marshall has been elevated to the status of a poem. In another amusing twist to the tale, in Jacob Tonson’s 1713 edition of the Poems, Marshall’s frontispiece was copied by an engraver named M. Vandergucht, who saw fit to replace Marshall’s signature with his own and so thus inadvertently direct the insult to himself.