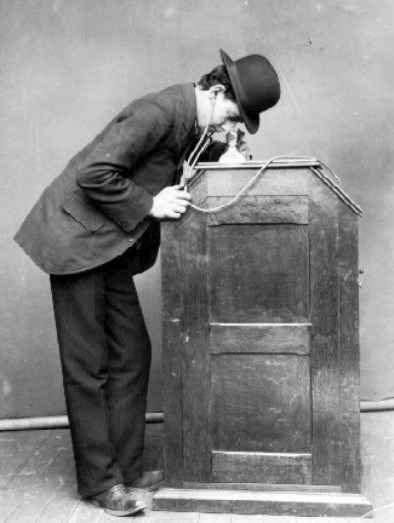 This is the recording of the voice audition of Frank Lenord from around 1913, including the reading of a letter as well as a short rendition of Hamlet's "To be or not to be" speech. The Kinetophone of the title refers to a combination of a phonograph and Kinetoscope, both of which were invented by Thomas Edison. While the phonograph could record and reproduce sound, the Kinetoscope was an early device for viewing films, though only one person at a time could watch the film through a viewer window on the device. The Kinetophone, invented in 1895, aimed to combine both picture and sound. The film could still only be viewed by one person, but a set of headphones connected to the machine made it possible to combine sound to the film, with different music tracks available. By 1913, the machine was able to project the film onto a screen with the phonograph placed separately in the room. However, the novelty was short lived, as the synchronisation of picture and sound did not always work and the sound quality was poor.