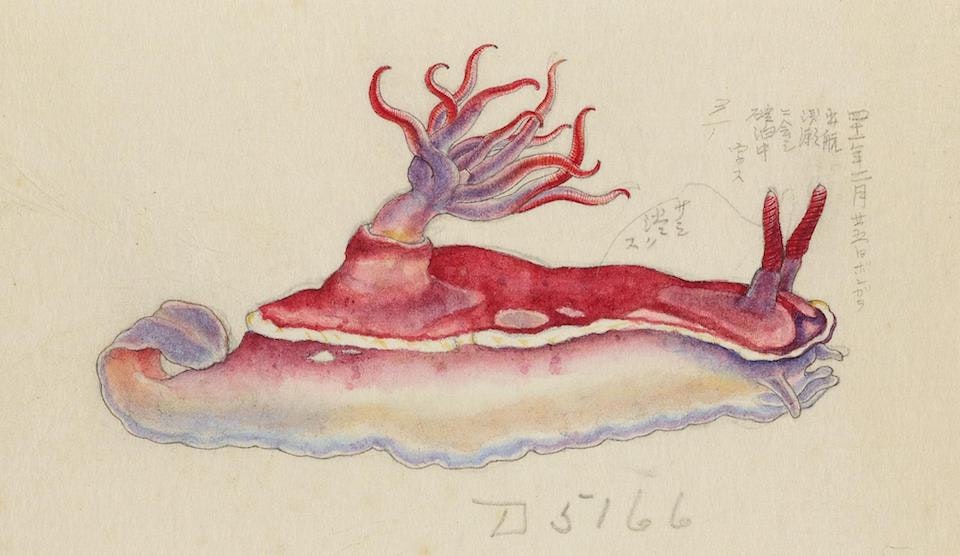 If you ask people what the most spectacular creatures on Earth are some might say the flamingos of the Andes, the birds-of-paradise of Papua New Guinea, or the tropical fish of the Galapagos. How many would say sea slugs? Yet the roughly 3,000 species in the family nudibranchia are legitimate contenders, coming as they do in a delightful, dizzying array of shapes, patterns and colours. Though most abundant in shallow and warm waters, nudibranchs can be found from the Arctic to the Antarctic, down to a depth of 2,500 metres. The barely believable forms of these horned marine wonders have been captured by modern divers and their underwater cameras. A century ago, only a skilled on-site artist stood any chance of doing a nudibranch aesthetic justice, particularly in relation to its brilliant but ephemeral colours which would dullen after death.

The vibrant paintings below are the work of Kumataro Ito, the chief illustrator aboard the USS Albatross as it undertook the monumental task, for the U.S. Bureau of Fisheries, of surveying the aquatic resources of the 7,000 islands of the Philippines. The Tokyo-based Ito cuts a somewhat mysterious figure on the expedition. We do know that he was on board the Albatross for a total of about 16 months, in three separate stints, during which he sketched and produced final paintings of about seventy nudibranchs, and over a hundred fishes. In 1912, following an invitation from the director of the Philippines expedition, Ito lived in Washington DC for up to a year, where he illustrated fish from North America and the deep seas of the Phillippines. Before his involvement with the Albatross, he had established his reputation as an illustrator of sea life with the publication, in Tokyo, of Fishes of Japan (1903–7). Though he was properly attributed in that book, he was very seldom so in those that followed the Philippines expedition.

The voyage ran from 1907 to 1910 and contributed greatly to scientific knowledge of the archipelago. Through various collection methods, from handlines to dynamite, an astonishing 490,000 specimens were delivered to the US National Museum (now the National Museum of Natural History). More on the expedition can be found in this Smithsonian article and more on Ito's role in particular in this 1999 article for the Marine Fisheries Review by Victor G. Springer.