Labors of the Months from the Très Riches Heures

The Très Riches Heures du Duc de Berry (or simply the Très Riches Heures) is probably the most important illuminated manuscript of the 15th century, "le roi des manuscrits enluminés" ("the king of illuminated manuscripts"). It is a very richly decorated Book of Hours containing over 200 folios, of which about half are full page illustrations. It was painted sometime between 1412 and 1416 by the Limbourg brothers for their patron Jean, Duc de Berry. They left it unfinished at their (and the Duc's) death in 1416. Charles I, Duc de Savoie commissioned Jean Colombe to finish the paintings between 1485-1489. Featured here are the Labors of the Months, the section illustrating the various activities undertaken by the Duke's court and his peasants according to the month of the year. Most of the illustrations show one of the Duke's castles in the background, and each are accompanied by a sun carrying Phoebus beneath an archway depicting the appropriate zodiac signs. (Wikipedia) 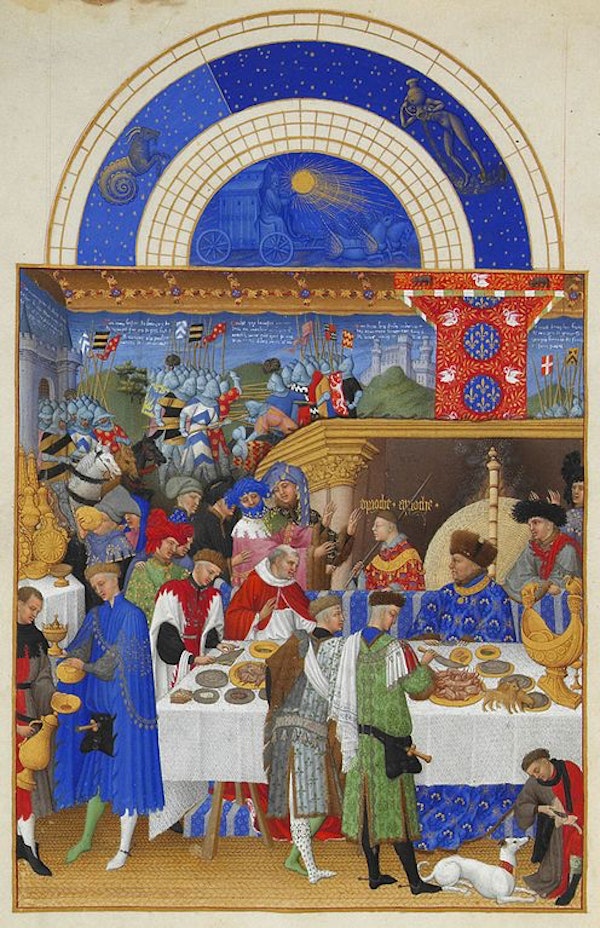 January: The Duke's household exchanges New Year gifts - the Duke at right in a blue robe. 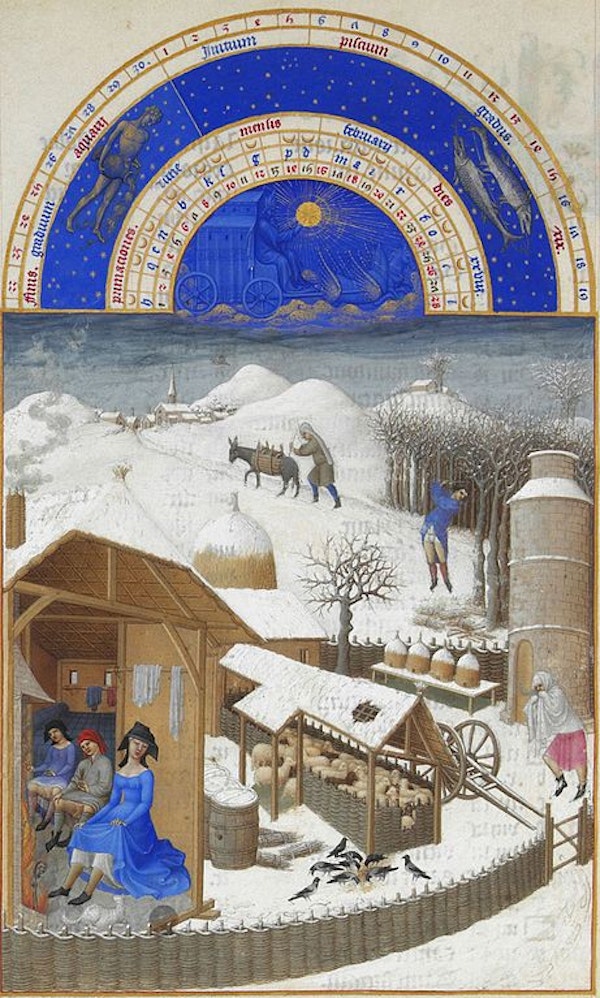 February: A typical winter's day. Some peasants warm themselves by the fire, another peasant chops wood, and still another goes to market. 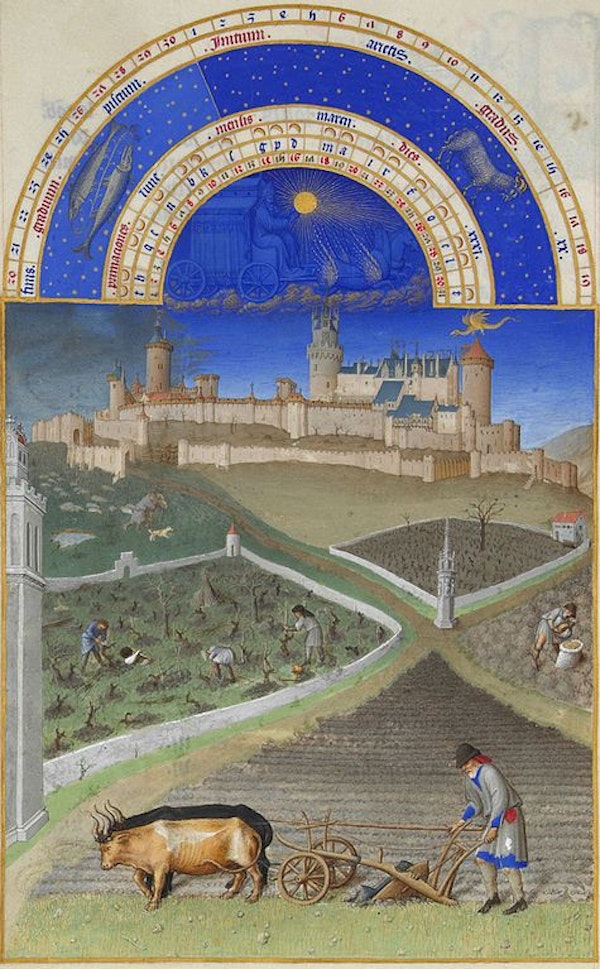 March: Sowing the field. In the background is the Château de Lusignan, a residence of Jean de Berry. 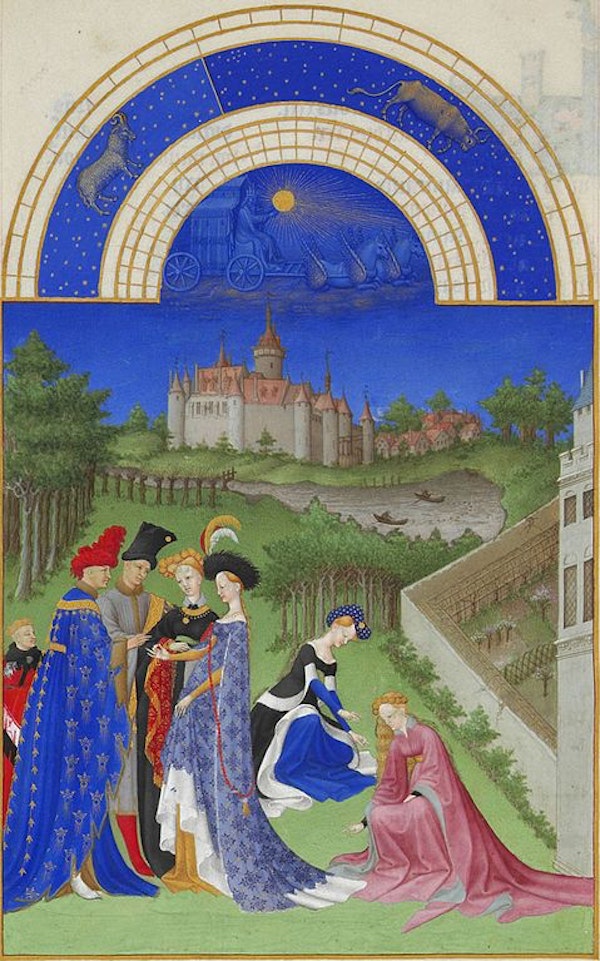 April: A young couple exchanging rings. In the background is the Château de Dourdan. 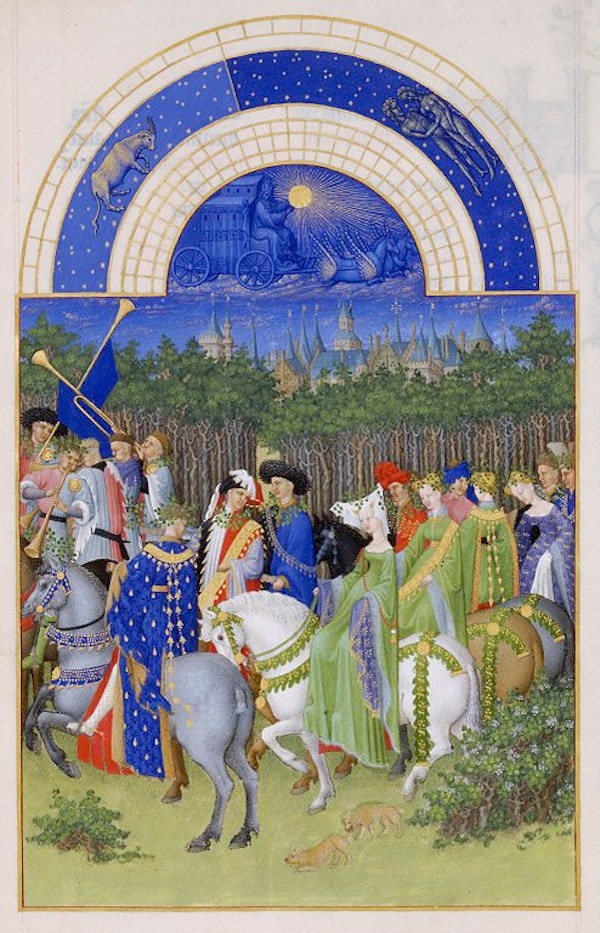 May: Young nobles riding in a procession. In the background is the Hôtel de Neslé, the Duke's residence in Paris. 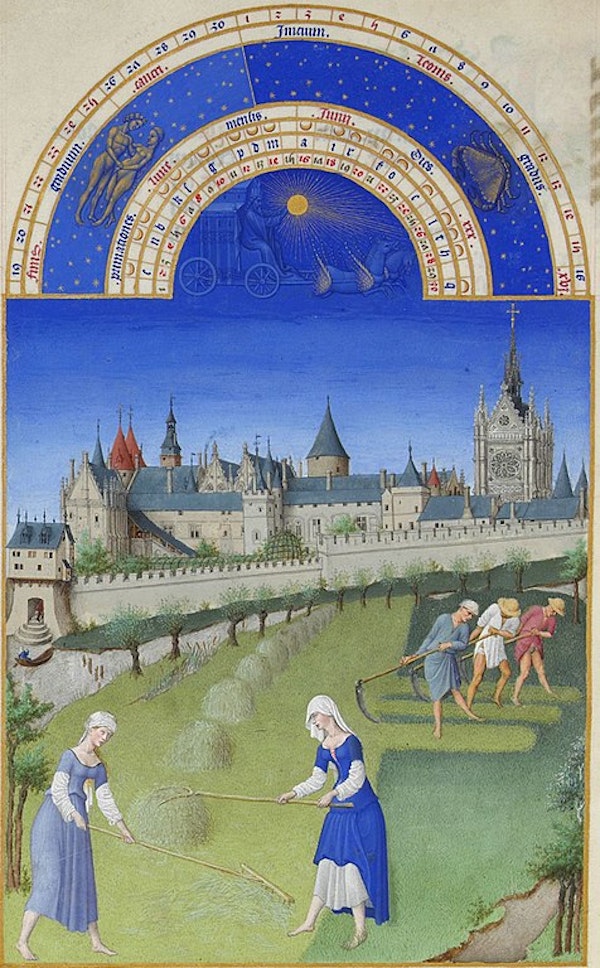 June: Harvest. In the background is the Palais de la Cité with the Sainte Chapelle clearly identifiable on the right. 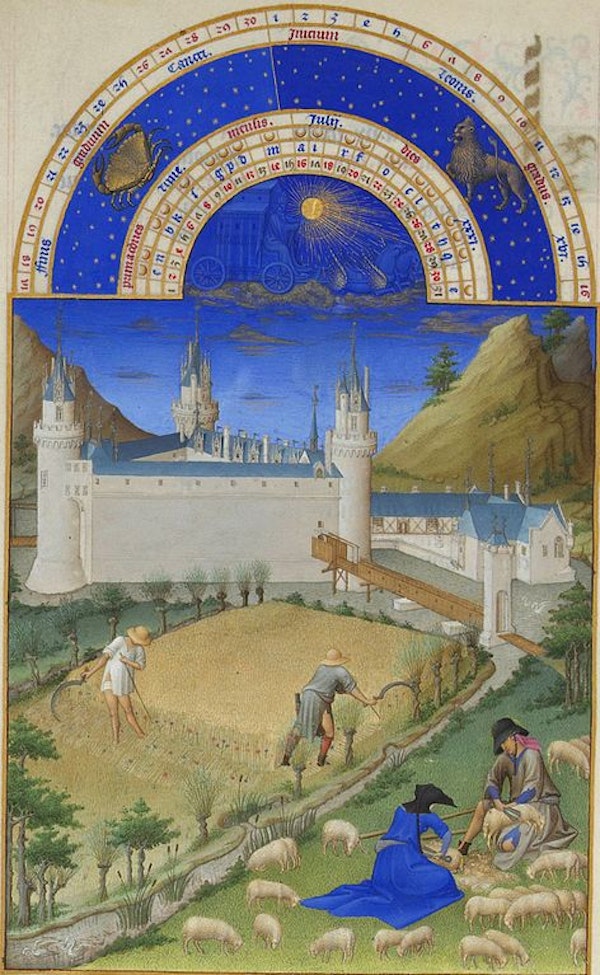 July: The shearing of the sheep. In the background is the Palace of Poitiers near Poitiers. 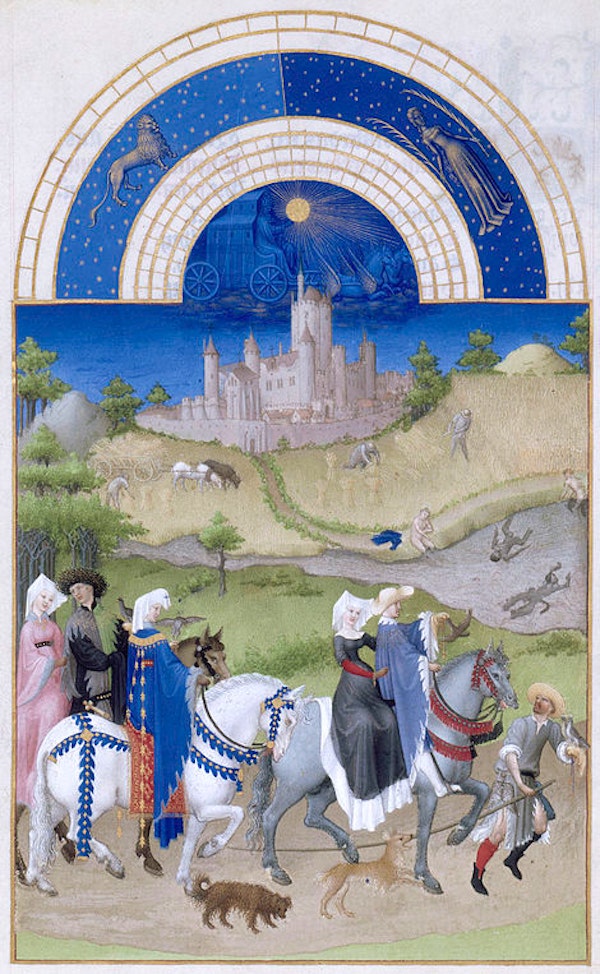 August: Falconry, with the Duc's Château d'Étampes in the background. 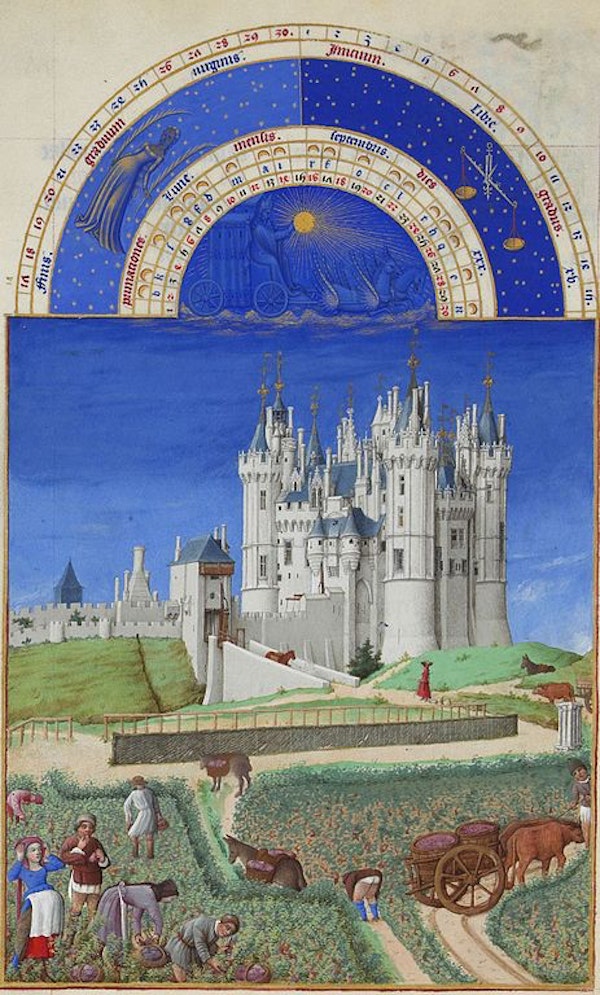 September: The harvest of the grapes. In the background is the Château de Saumur. 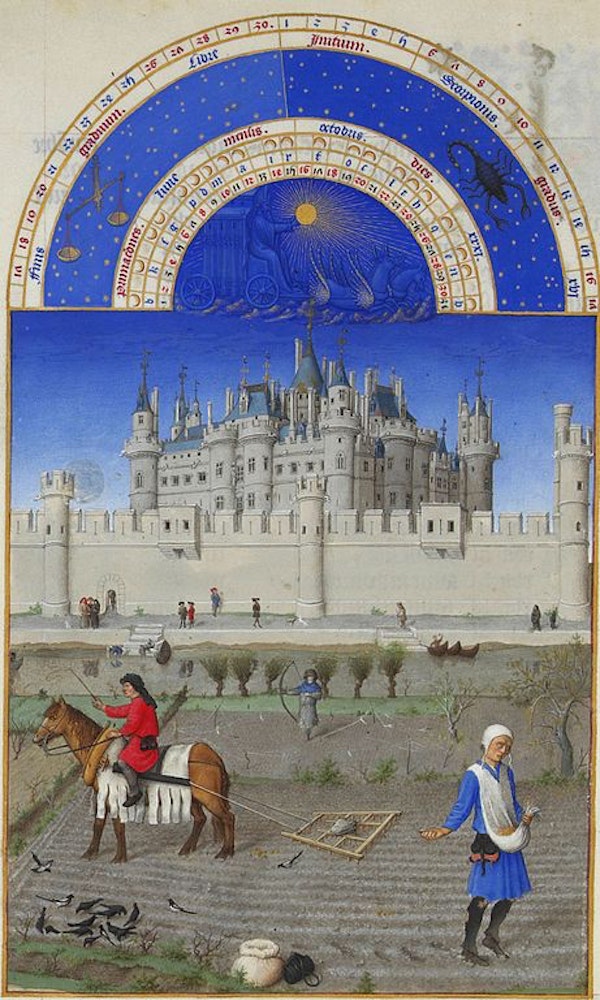 October: Tilling the field. In the background is the Louvre. 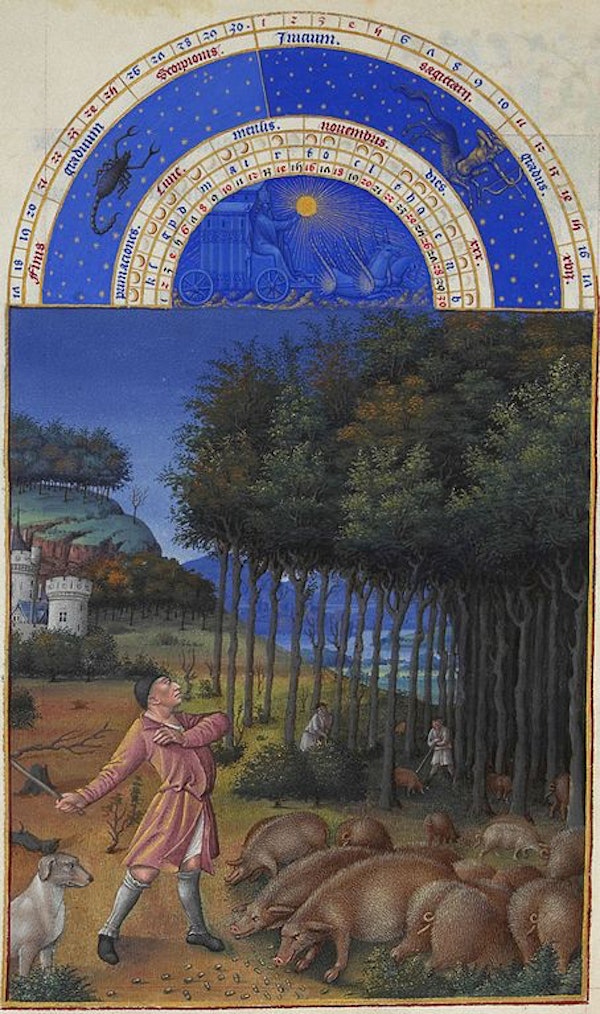 November: The autumn harvest of acorns, on which pigs are feeding. 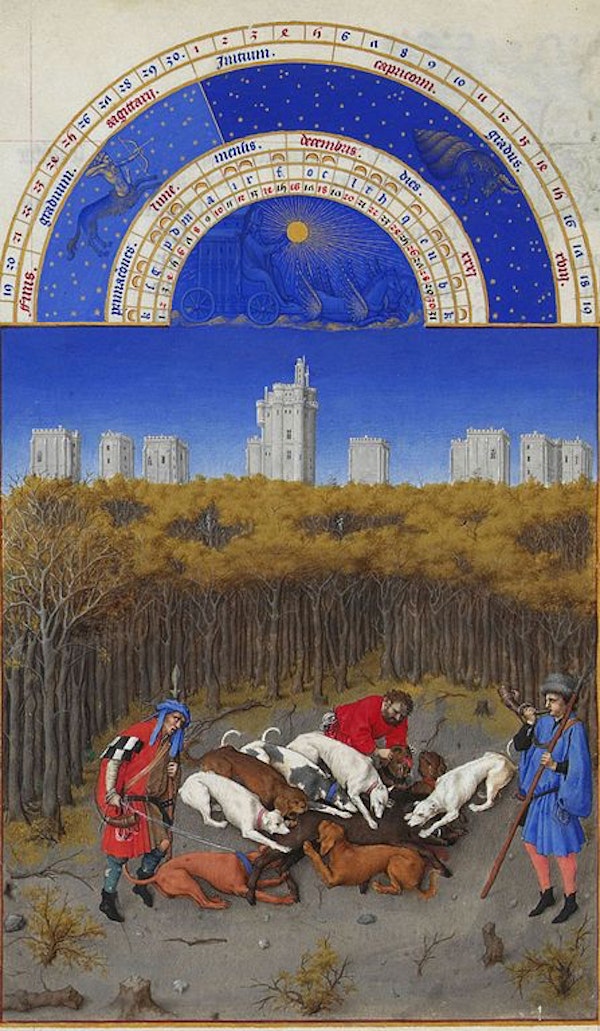 December: A wild boar hunt. In the background is the Château de Vincennes.