It is not immediately clear what drew Marcus Selmer (1819 – 1900), a Danish portrait photographer, to spend most of his life working in Norway. He trained as a pharmacist in his native Denmark, and was working in a chemist owned by his uncle when he discovered daguerreotype photography. He experimented with this new technology in his spare time and began sending his pictures in to local exhibitions. In 1852, Selmer travelled to Norway, to visit some of his uncle’s family in the city of Bergen. He never returned.

He soon found work as a photographer in Bergen and, within a year, was able to establish his own studio. This became the first permanent photographic studio in Bergen, as few photographers who visited would stay all year round. Photographers often visited Bergen in the summer, hoping to capture the fjords and mountains that surround the area, but, as they needed good light for their work, the dark and cold weather had driven most of them away by the time winter rolled around. Selmer ingeniously built his studio almost entirely out of glass, allowing enough light into the space, which enabled him to continue working throughout the year.

Selmer’s work quickly became well-known throughout Norway. He sold many books of his photographs, and sold individual images to the press and the burgeoning tourist industry, before eventually being appointed the royal photographer in 1880. Although his career was varied, Selmer is primarily remembered today for his portraits of local people in national folk costume, as shown here. These photographs depict the customs, traditions and culture of the Norwegian people, and reflect Selmer’s interest in his adopted home. One of Selmer’s most notable portraits is of a local folk hero named Ole Storviken. 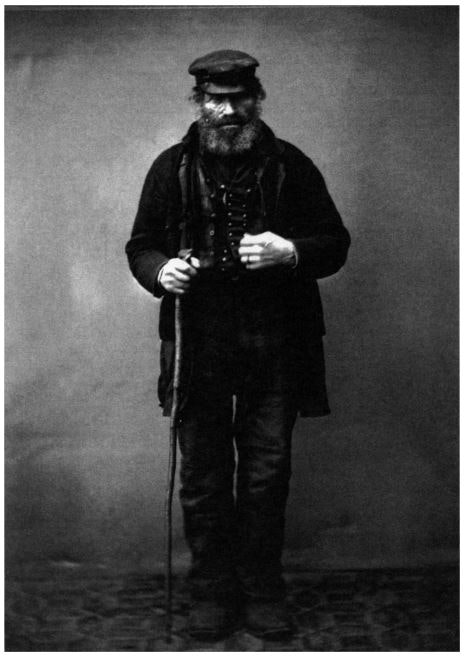 Storviken had once been a prosperous fisherman who fell into drunkenness and despair and spent decades wandering the Norwegian countryside. In the popular imagination, he became associated with the trolls and fairies of Norwegian legend, and tales that surround him refer to him as the strongest man in Norway. Storviken died just outside of Bergen in 1863, just a few years after Selmer took his photograph.

Selmer’s long career spanned almost half a century, and it can be assumed he took many thousands of photographs during this time. However, as much of his negative archive was destroyed after his death, only a handful of his daguerreotypes remain. Below we feature some of the most striking of these, beautifully coloured by hand, now in the collection of the National Library of Norway.