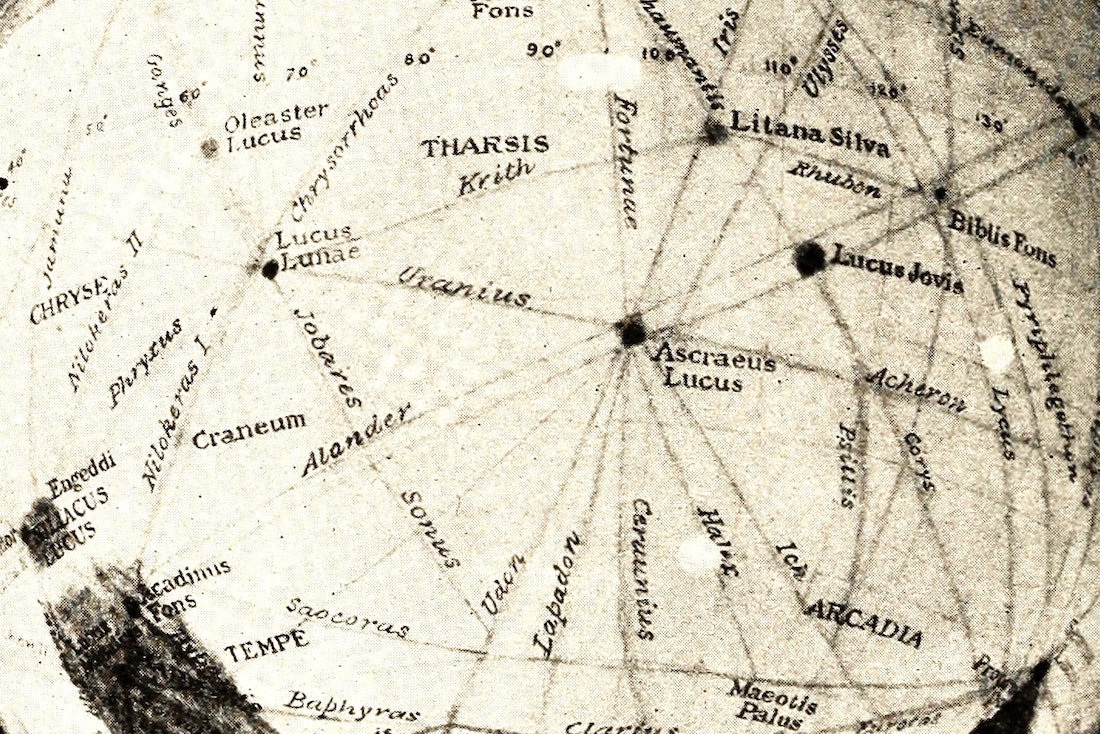 Long before David Bowie asked if there was life on Mars, a wealthy American astronomer arrived on a clear-cut answer: yes, and it built canals.

The groundwork for this theory was laid in 1877, when Giovanni Virginio Schiaparelli began mapping the planet's surface from the Brera Observatory in Milan, where he served as director. Thanks to a slight abnormality in the Merz refractor telescope installed three years earlier, known as overcorrected chromatic aberration, his equipment was unintentionally calibrated for viewing the Red Planet. And then the stars, as it were, further aligned: he timed his observation with a biannual cosmic pattern, an event known as opposition, when Mars moves closest to the Earth. Schiaparelli began seeing things almost immediately --- shapes that resembled dim lines, crisscrossing the extraterrestrial desert.

Despite being colorblind, there was no question of the observer's integrity. Like the telescope, Schiaparelli had honed his body to be a superior astronomical instrument. He abstained from "everything which could affect the nervous system, from narcotics to alcohol, and especially from the abuse of coffee, which [he] found to be exceedingly prejudicial to the accuracy of observation." With clear eyes, Schiaparelli saw intoxicating landscapes and named the linear features canali: a word that, in Italian, can stand for both natural, geological trenches and manufactured channels. Other notable astronomers, such as Henri Joseph Perrotin and Louis Thollon, soon saw them too.

Historians offer different theories for what happened next. Some think alien life was found in translation, as, unlike canali, the English "canals" primarily conjures trenches dug by intelligent life. Others credit the recent completion of the Suez Canal (in 1869) for priming the popular imagination with canaliform desires. And still others believe that it is a question of Gestalt psychology, with Mars serving as an interplanetary Rorschach test on which to project one of our species' oldest questions: are we truly alone?

Schiaparelli's research was championed by one astronomer in particular: Percival Lowell, brother of the Imagist poet Amy Lowell. A polymath and Boston Brahmin, as labelled by his biographer David Strauss, Lowell led the kind of life only possible for a certain class of individual in the nineteenth century. He spent his thirties in East Asia, writing books with titles like The Soul of the Far East (1888) and Occult Japan (1895), which includes a chapter on demonic possession, and served as Foreign Secretary for the first Korean delegation to visit the United States. Not everyone approved of Lowell's roving, intellectual or otherwise. "Poor Percy," the philanthropist Isabella Stewart Gardener once remarked, "[h]e takes a great interest in everything. . . but there is always something pathetic about him. . . his pleasant things always seem to fall flat." In 1893, the bachelor Japanist returned to America and turned his attention from demons to angels: traces of life in the night sky.

To assist his new hobby, Lowell bought himself equipment: an observatory built from scratch in Flagstaff, Arizona. He soon released a trilogy of studies: Mars (1895); Mars and its Canals (1906); and Mars as the Abode of Life (1908). His thesis? Simple: Schiaparelli's canals were actually the irrigation channels of an advanced civilization that funneled water from its polar caps in accordance with seasonal demand and a changing climate. Weirder still, the Martian canals were not able to be reliably observed (William Henry Pickering, one of the assistants in Flagstaff, could not see the channels, despite looking through the same equipment where they materialized for Lowell and Andrew Ellicott Douglass). There is some evidence that the whole affair was a collective hallucination, arising from an error built into human pattern recognition. As Klaus Hentschel details, when a group of Cambridge schoolboys were shown drawings of Martian topography without canals, and asked to duplicate the images, their sketches often inserted thin lines where there were previously none.

Despite blundering on the global stage, Lowell's observatory went on to search for proof of the mysterious Planet X, thought to orbit beyond Neptune. The dwarf planet Pluto now bears his initials in its name. And although he did not discover alien infrastructure, Lowell built another kind of foundation: neither H.G. Wells' The War of the Worlds nor Orson Welles' radio adaptation (and the popular delusion it inspired) would have been possible without Lowell's original Martian fever.

※Indexed under…
Text by Hunter Dukes

Illustration from Percival Lowell's Mars and its Canals, 1906 — Source

The region known as Mare Erythraeum, drawn on the Martian date of December 30th. Illustration from Percival Lowell's Mars and its Canals, 1906 — Source

The region known as Mare Erythraeum, drawn on the Martian date of January 16th. Illustration from Percival Lowell's Mars and its Canals, 1906 — Source

The region known as Mare Erythraeum, drawn on the Martian date of February 1st. Illustration from Percival Lowell's Mars and its Canals, 1906 — Source

The region known as Mare Erythraeum, drawn on the Martian date of February 21st. Illustration from Percival Lowell's Mars and its Canals, 1906 — Source

Illustration from Percival Lowell's Mars and its Canals, 1906 — Source

Illustration from Percival Lowell's Mars as the Abode of Life, 1908 — Source

Illustration from Percival Lowell's Mars as the Abode of Life, 1908 — Source