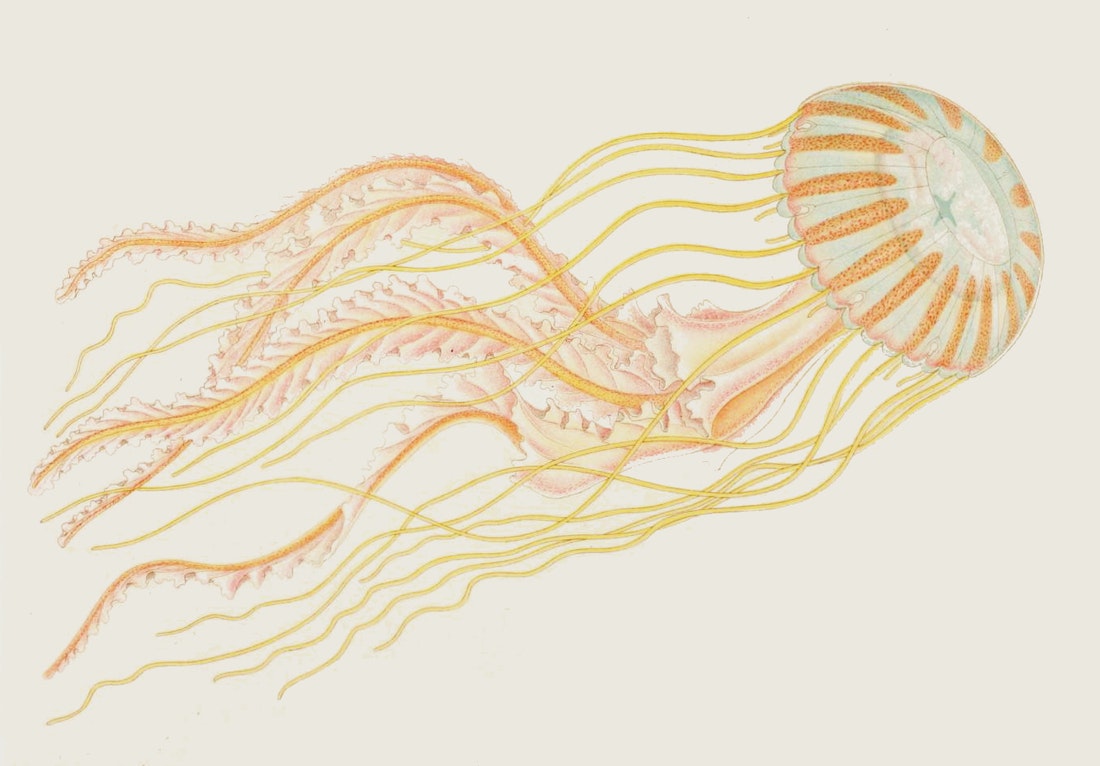 There is something inevitable about Alfred Goldsborough Mayer’s attraction to jellyfish. Like Ernst Haeckel before him, Mayer could never “remain insensible to the rare grace of form and delicate beauty of color of these creatures of the sea”. While Haeckel’s highly-stylized illustrations of Medusae are widely celebrated, the seventy-six color plates of Mayer’s Medusae of the World (1910) — in three quarto-size volumes comprising 735 pages of text and 428 line figures — are almost entirely unknown to all but specialists. Each figure is executed with an eye toward satisfying the exacting taxonomic task of classifying jellyfish’s bewildering diversity. Poorly known in Mayer’s day, Medusae of the World described 565 species of Hydromedusae — mostly small jellyfish commonly called the “veiled medusae” for the presence of propulsion-assisting veils on their bells — and 180 species of Scyphomedusae, or “true jellyfishes”, including familiar species such as the Moon Jelly (Aurelia aurita), the Sea Nettle (Chrysaora quinquecirrha), the Lion’s Mane Jelly (Cyanea capillata), the Cannonball Jelly (Stomolophus meleagris), and various Upside-down Jellies (Cassiopea spp.).

These handsome volumes are more than a compendium of this difficult phylum, for Mayer’s gracefully written text also summarized the latest research on Medusae life history, embryology, cytology, ecology, physiology, regeneration, and behavior. Having in his first scientific publications included superb line drawings of box tortoises, garter snakes, and the variegated wing scales of butterflies, his gift for zoological illustration and close natural history observation drew him to the attention of Alexander Agassiz, son of the titan Swiss naturalist Louis Agassiz, and founder of a private marine biological laboratory at Newport, Rhode Island. Contemplating the location information for many of Mayer’s gorgeous drawings, one gets a glimpse of the littoral nature of Gilded Age scientific patronage; from Casco Bay, Maine to Newport, RI, Cold Spring Harbor, NY, to Chesapeake Bay, and down through Cape Fear to Key West and Nassau Harbor, the richest places to collect these colorful flowers of the sea were also the favorite haunts of America’s yachting set. The aging and somewhat tyrannical Agassiz sent Mayer on collecting expeditions much farther afield — Fiji, Java, Tahiti, Japan, most of the major islands and coasts of Oceania and Australia — and by the time that Mayer’s opus magnum was published, “Alex the Great” (Mayer’s wife Harriet preferred “Ivan the Terrible”) had passed away.

Though Medusae of the World is long on tedious taxonomy and short on descriptive natural history narrative, there is still a dramatic nemesis at the heart of these three volumes: Ernst Haeckel, whose limited field experience and zeal for new species made him a “splitter”, as contrasted with Mayer’s “lumper” taxonomic tendency. “I have seen Haeckel’s ‘species’ only in medusa which I have myself preserved”, Mayer confessed. “They appear not to exist except in alcohol.” While Haeckel’s paintings turn the floating phantoms into baroque spectacles of color and flowing form, Mayer’s medusae are more sober, their tentacles subdued, their umbellate bells transparent. Even his text descriptions tend to mute the hues, in favor of faithful phenomenology; speaking of the Mediterranean medusa Carybdea marsupialis, Mayer says: “Bell and pedalia dull milky-ocher, due to the color of the exumbrella nematocyst-warts. Flexible parts of tentacles dull pink. Ocelli very dark brown, nearly black; basal branches of gastric cilli dull horny-brown.”

For all of his unromantic exactitude, Mayer’s jellyfish are nonetheless dreamily beckoning forms, tissues which find pulsing animation at the aqueous threshold of life. Below you can browse a selection of illustrations from Mayer’s three volumes. Captions can be found, after clicking the source link, on the page before each plate.