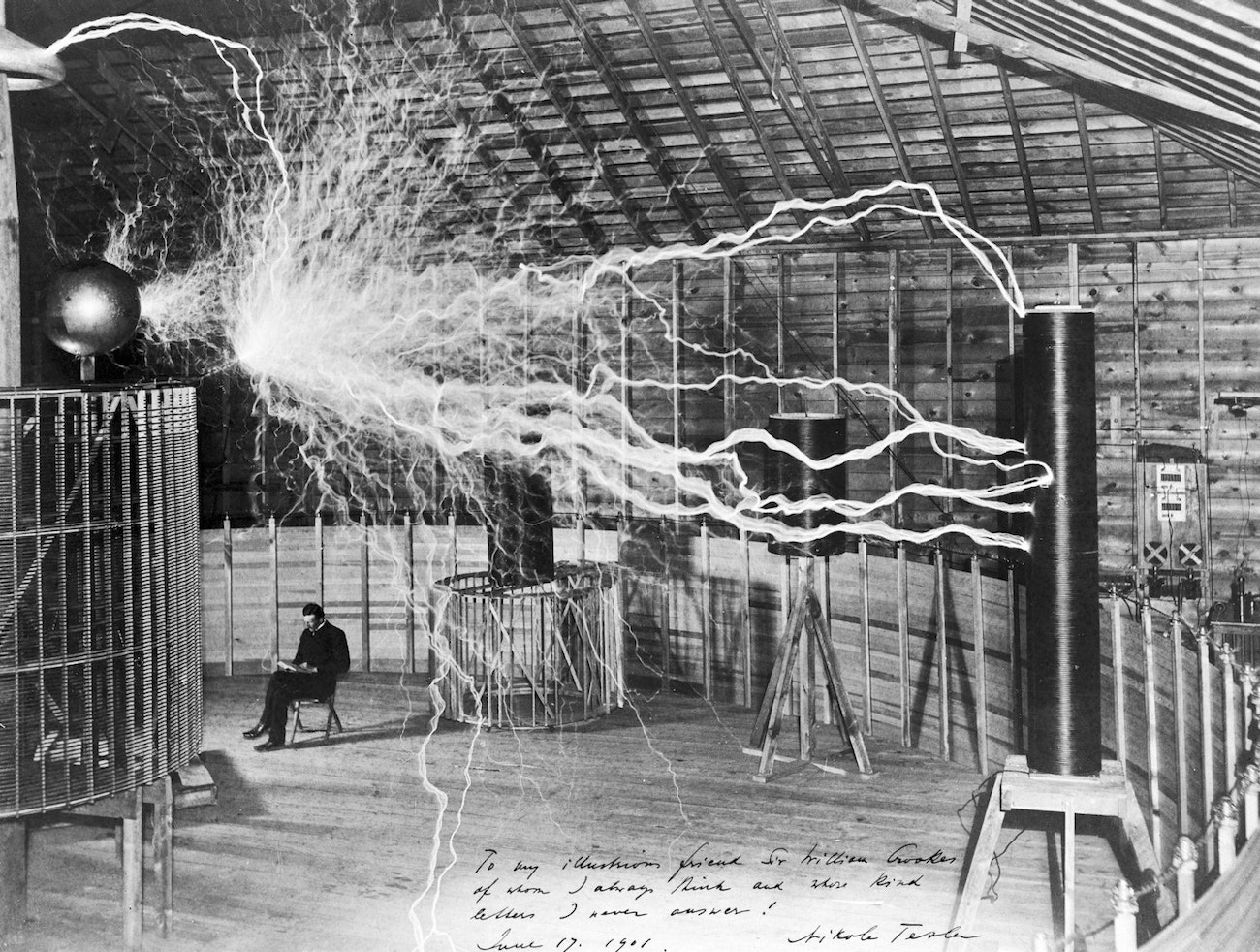 A double-exposed photograph showing Tesla in his Colorado Springs laboratory, ca. 1899. Tesla forced his “magnifying transmitter” to produce inefficient arcs by turning the machine rapidly on and off during the photoshoot for The Century Magazine — Source.

It becomes more and more difficult to answer a neglected message as time ticks on. You have broken the circuit of communication, kept your correspondent in the lurch. Electrical engineer Nikola Tesla, “the man who invented the twentieth century”, reignited his correspondence with friend and mentor William Crookes in an arresting way. On a photograph of himself seated beneath a giant “magnifying transmitter”, arcing twenty-two-foot-long bolts of electricity, Tesla inscribed: “To my illustrious friend Sir William Crookes of whom I always think and whose kind letters I never answer!”

Too busy to return letters, Tesla was hard at work making the medium obsolete. In “The Problem of Increasing Human Energy”, the 1900 Century Magazine article for which this double-exposure photograph was originally staged, the inventor describes how his “mind was dominated by the idea of effecting communication to any distance through the earth or environing medium”. Tesla had hit on the idea of a planetary messaging platform, for both tellurian and extraterrestrial recipients, which would consume decades of his life. Why fuss with laying telegraph cables (or power lines) if the earth itself could deliver electrical signals of varying strengths to a specific addressee?

The Century photograph marks a period of cultivated publicity in Tesla’s life. Having outgrown his New York laboratory, which, according to biographer Marc Seiffer, was “vulnerable to fires and potential spies”, the Serbian-American electrician decamped for Colorado Springs. Here he had previously created “hyperbolic headlines” by successfully transmitting the ballad “Ben Bolt” between two earth-connected autoharps, leading the public to believe he knew how to tap a power reserve within the planet’s mantle. In Colorado, he would build a research center at the invitation of attorney Leonard E. Curtis, who had supported Tesla during the “war of the currents”: when Thomas Edison’s DC power was pitted against George Westinghouse, the licensee of Tesla’s patents for alternating current (AC). Before leaving New York, Tesla publicized his new research departure in Electrical Review, where he was shown holding a 1,500 candlepower lightbulb — wirelessly powered by a version of his eponymous coil — apologizing to the reader “for the frequent appearance of my likeness in these photographs, which is distasteful to me, but was unavoidable”. Unavoidable and strategic: Tesla needed support for an oscillator strong enough to “talk to the inhabitants of the planet Mars”, a technology that would hopefully allow him to realize “one of my fondest dreams; namely, the transmission of power from station to station without the employment of any connecting wire”. Soon after, thanks to free electricity from the El Paso Electric Company, he would indeed intercept what he believed to be Martian communication — the letter “S” in Morse code — which happened to be the same message Guglielmo Marconi was broadcasting during contemporaneous radio experiments between England and France. 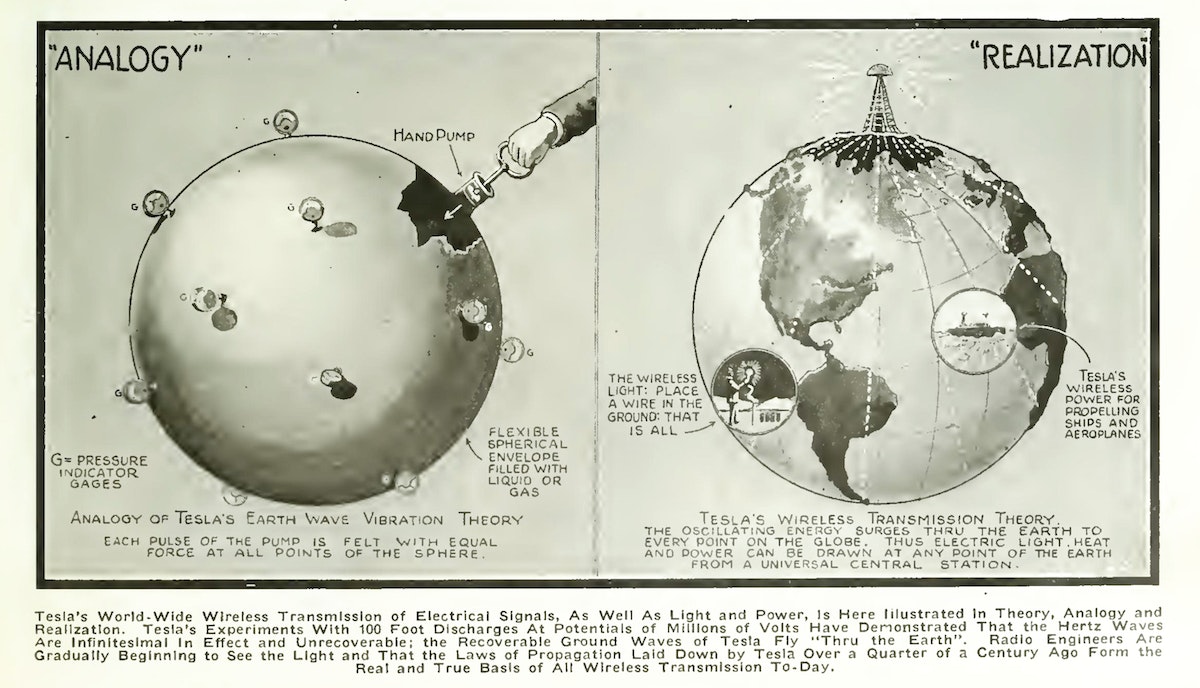 A diagram illustrating Tesla's plan for the worldwide transmission of electrical signals, from his 1919 article “Famous Scientific Illusions” for Electrical Experimenter — Source.

In the 1890s, when Tesla began to conceive of a “World Wireless System”, the air crackled with voice. Cordless communication was a hallmark of the future, and the future seemed to be speaking itself into existence. While Marconi increased the range of his radio broadcasts exponentially during the decade, borrowing generously from Tesla’s own research, both men had wireless precursors. During the 1860s, the dentist-inventor Mahlon Loomis is thought to have sent an electrical current between two kites flying eighteen miles apart, while Alexander Graham Bell and Charles Sumner Tainter invented the photophone in 1880. A precursor to fiber optics, the device relied upon sunlight to transmit audio. “I have heard a ray of the sun laugh and cough and sing!” Bell told his father after the breakthrough, announcing, to his wife Mabel’s chagrin, an interest in naming their second daughter “Photophone” in celebration. Reliant on light, however, Bell and Tainer’s system suffered a communications blackout at each day’s dusk.

While Bell and Tainter focused on sunlit communication, Tesla was trying to rewire Earth’s relationship to the solar system. Like James Clerk Maxwell’s “demon”, he sought to overcome the second law of thermodynamics. “Modern science says: The sun is the past, the earth is the present, the moon is the future. From an incandescent mass we have originated, and into a frozen mass we shall return”, Tesla writes in “The Problem of Increasing Human Energy”, the subtitle of which promises “special reference to the harnessing of the sun’s energy”. He composed his speculative treatise after a commission by Robert Underwood Johnson, editor of Century, who begged him “not to write a metaphysical article, but rather an informative one”, and sent Dickenson V. Alley to Colorado to take promotional photographs. 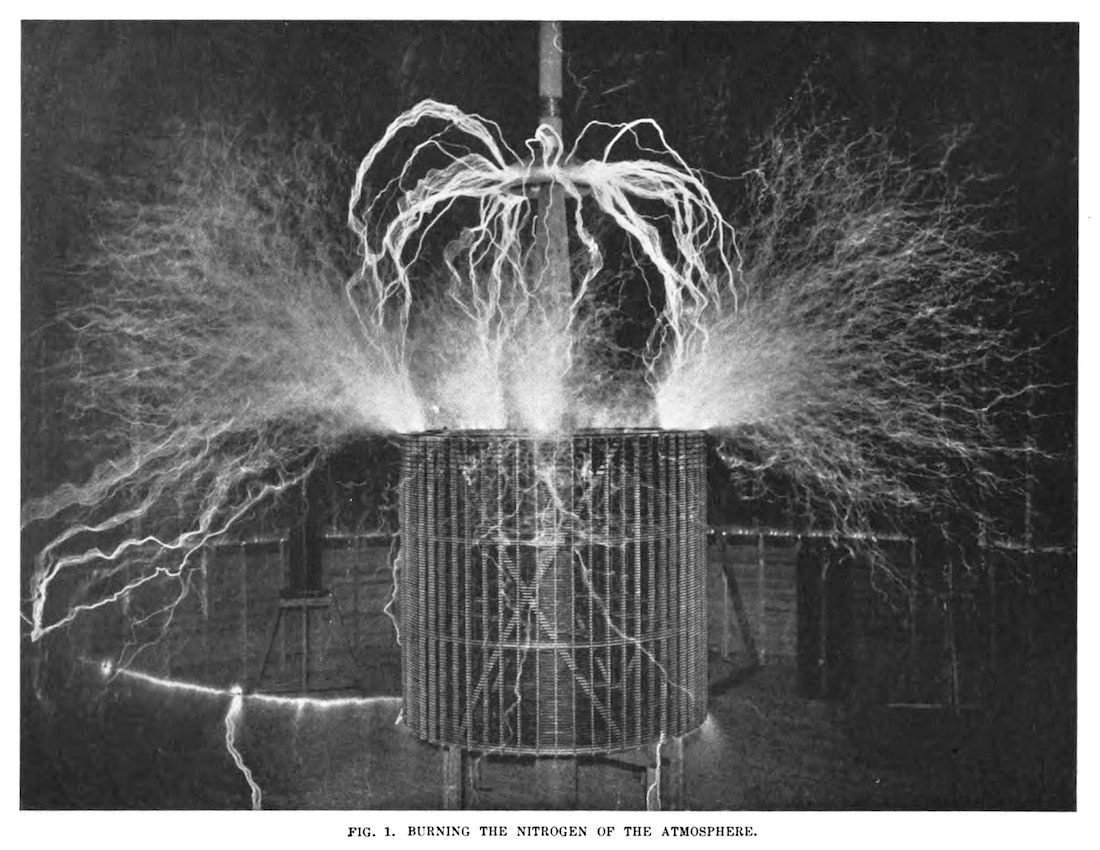 The photographs served their intended purpose, illustrating a twelve-thousand-word essay where Tesla did everything but shy away from metaphysics. In order to combat the inevitability of entropy, he offers various visions of the future: global demilitarization through a version of mutually assured destruction, the liberation of humans from their reliance on food, and a theory resembling the many-worlds interpretation. Along the way, Tesla champions wind and solar power as superior to coal, dreams of machines powered solely by gravity and frictionless engines. At the center of his future is a device related to the “magnifying transmitter”, which would be capable of wirelessly powering appliances around the world, using the earth’s resonance to amplify energy created from renewable sources like waterfalls:

Export of power would then become the chief source of income for many happily situated countries. . . . Men could settle down anywhere, fertilize and irrigate the soil with little effort, and convert barren deserts into gardens, and thus the entire globe could be transformed and made a fitter abode for mankind.

Despite the metaphysics, or, indeed, because of them, this article and its photographs galvanized public opinion. A year after its publication, Tesla would begin to build the Wardenclyffe Tower in Long Island, thanks to funding from J. P. Morgan. Here he carried out experiments related to wireless power and theorized about building a mysterious “teleforce” energy weapon. For scientific, financial, and personal reasons, he never realized his vision of large-scale wireless power, but, as evidenced by — among countless other examples — the automotive company that bears his name, inventors continue to try and reply to the open letter that Tesla sent into the future.