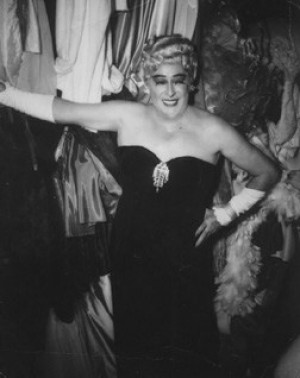 During the Pansy Craze of 1930-1933 (mainly in Manhattan), gay clubs and performers, known as "pansy performers", experienced a huge surge in underground popularity. In 1932, Rae Bourbon was working full-time as a female impersonator at such clubs as Jimmy's Back Yard in Hollywood and Tait's in San Francisco. At the latter, in May 1933, police raided his "Boys Will Be Girls" review during a live radio broadcast. In the later 30s and early 40s he headlined at the Rendezvous in Los Angeles and starred in his own revue, "Don't Call Me Madam." Throughout the 50s and 60s Bourbon entertained at hundreds of clubs throughout the U.S. and released dozens of albums, certainly the most prolific female impersonator to have done the latter. His appearances are still fondly remembered by many who saw him when he toured in big and small towns all over the country, providing many isolated Gay men with a glimpse of the loose-knit urban Gay community of the pre-Stonewall era. His comedy was at once highbrow and lowbrow, overtly gay and covertly subversive. Despite his influence on gays, he remained vague about his own sexuality. There is evidence that he had relationships with both men and women, was married twice, and fathered at least one son. Bourbon excelled at generating numerous conflicting stories about himself. (From Wikipedia)