Of Chickens, Eggs, and Cannonballs: Roger Fenton’s Valley of the Shadow of Death (1855) 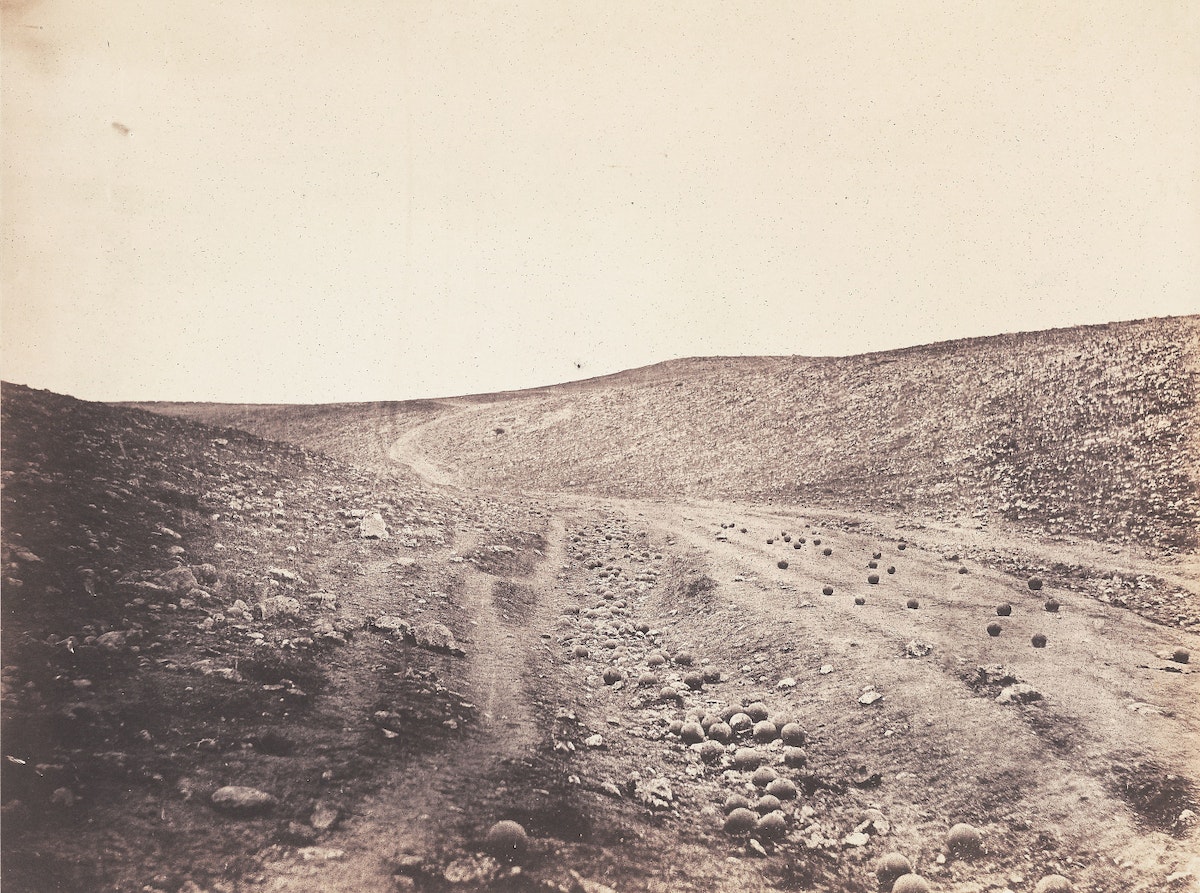 This image, taken by Roger Fenton during the Crimean War in 1855, is one of the earliest photographic records of warfare. It's also widely considered one of the first "faked" photographs (in which the content has been manipulated with the aim of conveying a different reality as to that which took place).

Known as Valley of the Shadow of Death the photograph shows a desolate scene littered with cannonballs, some populating a ditch and some scattered along a stretch of road. It is an arresting image — somehow managing to evoke at once the heavy throes of mid-battle and the eery calm of a body-strewn aftermath. This famous image is, in fact, one of a pair — both taken by Fenton on the same day, from the same position, of the very same vista. The difference between them? The less famous version has no cannonballs on the road — they are all in the ditch instead. 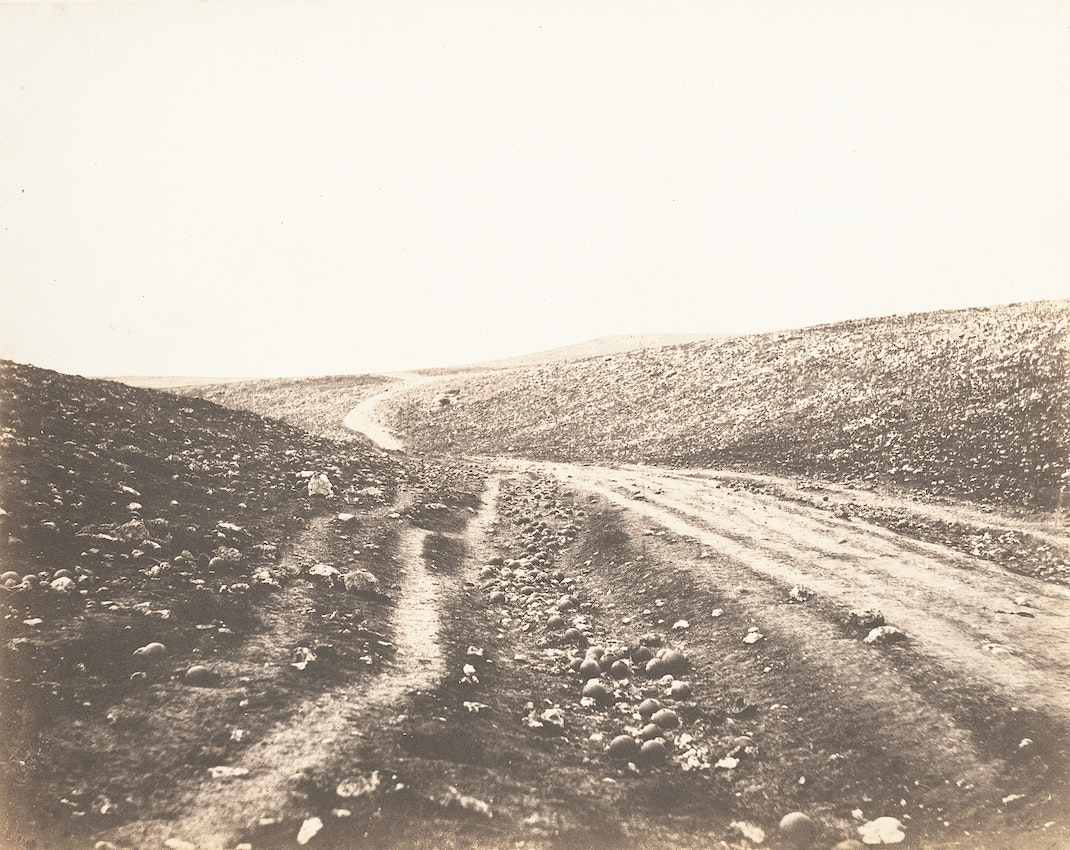 To those so inclined, this spot-the-difference scenario presents an intriguing question — which photograph (if either) is of the scene Fenton actually encountered? Which one was taken first? Many have assumed that the cannonballs-on-road image is the second one, that Fenton staged the photograph by moving the cannonballs from their original place in the ditch onto the road for dramatic effect. The German art historian Ulrich Keller was one of the first to advance this theory, which Susan Sontag later accepted as gospel in her book Regarding the Pain of Others, where she writes:

Not surprisingly many of the canonical images of early war photography turn out to have been staged, or to have had their subjects tampered with. After reaching the much-shelled valley approaching Sebastopol in his horse-drawn darkroom, Fenton made two exposures from the same tripod position: in the first version of the celebrated photo he was to call “The Valley of the Shadow of Death”(despite the title it was not across this landscape that the Light Brigade made its doomed charge), the cannonballs are thick on the ground to the left of the road, but before taking the second picture — the one that is always reproduced — he oversaw the scattering of the cannonballs on the road itself.

After reading this passage, the relentlessly truth-loving documentary filmmaker Errol Morris became obsessed with determining whether it was indeed true that Fenton staged the picture — and in 2007 published his extensive explorations in an epic three-part New York Times piece called “Which Came First, the Chicken or the Egg?”. His conviction that “nothing is so obvious that it’s obvious” led him to interview several historians (including Keller), half of whom agreed that Fenton staged the photograph and half of whom thought the cannonballs on the road was how the scene presented itself, with the clear road photograph the result of soldiers later moving the cannonballs to recycle them for future battles.

Morris, still unsatisfied, then traveled to the exact spot in the Sevastopol, borrowed some cannonballs, and, after doing some staging of his own, tried to determine the chronology by studying the angle of light (all to no avail). Only with the eagle eyes of Dennis Purcell — an optical engineer who noticed that a group of five small rocks on the left slope were positioned in a lower position in the photograph with the cannonballs on the road — was Morris able to determine, seemingly beyond a shadow of a doubt, that Keller and Sontag were correct. Acknowledging it extremely unlikely that these five rocks — which Purcell nicknamed Fred, George, Oswald, Lionel, and Marmaduke — somehow moved up the hill, Morris and Purcell came to the conclusion that the rocks had moved down the hill (such is the way of gravity and rocks on a slope) and so this photograph showing the rocks in a lower position (the one with the cannonballs in the road) was taken second. When Fenton and his assistant walked around the scene to stage the cannonballs in the road, they dislodged these rocks and they fell downwards. Thus the photograph was staged.

Images from Errol Morris' “Which Came First, the Chicken or the Egg?" as printed in his Believing Is Seeing: Observations on the Mysteries of Photography (2011). On the left (circled in blue) are shown the rocks Fred, George, Oswald, Lionel, and Marmaduke as they appear in the cannonballs-off-road image, and on the right the same rocks (circled in orange) in the cannonballs-on-road image.

While Morris' investigations show that it's extremely likely Fenton staged the photograph by placing cannonballs in the road, whether it was Fenton’s intention to actively “fool” viewers remains debatable. Did Fenton even have such a clearcut conception of what it would be to fool viewers? After all, by contemporary standards, it could be argued that almost every ostensibly documentary photograph taken in the 1850s was staged. The size and nature of Fenton’s photographic equipment meant he could only capture stationary objects, landscapes, and posed people. Indeed, for this reason and related safety concerns, Valley of the Shadow of Death wasn’t taken in the valley where the doomed Charge of the Light Brigade occurred but several miles away. (The title itself —a phrase from Psalm 23 used by British troops before being taken up by Tennyson — was subsequently imposed by the publisher and gallerist Thomas Agnew, who displayed Fenton’s photograph as part of a series entitled Panorama of the Plateau of Sebastopol in Eleven Parts.)

Fenton's Valley of the Shadow of Death was produced some eighty years before Robert Capa's Falling Soldier, at a time when, it could be argued, such staging was written into the very practicalities of the medium, a medium which in its early days was much closer to painting than it is now. Might what we see as inauthentic staging instead be seen as working within limitations to produce something actually more authentic, that reflected more truthfully the throes of battle in which Fenton and his over-sized equipment could not be fully immersed as could Capa? Or more simply, might Fenton have witnessed soldiers clearing the road of cannonballs and merely recreated it as he'd first encountered it? Are not all photographs in some way staged? All interesting questions.

For more on such things we highly recommend Morris' Believing Is Seeing: Observations on the Mysteries of Photography (2011), which includes his New York Times piece on Fenton as well as a few other similar essays on other documentary photographs through history. You can also listen to Morris talking about his obsession with this photograph in an episode of Radiolab from 2012.