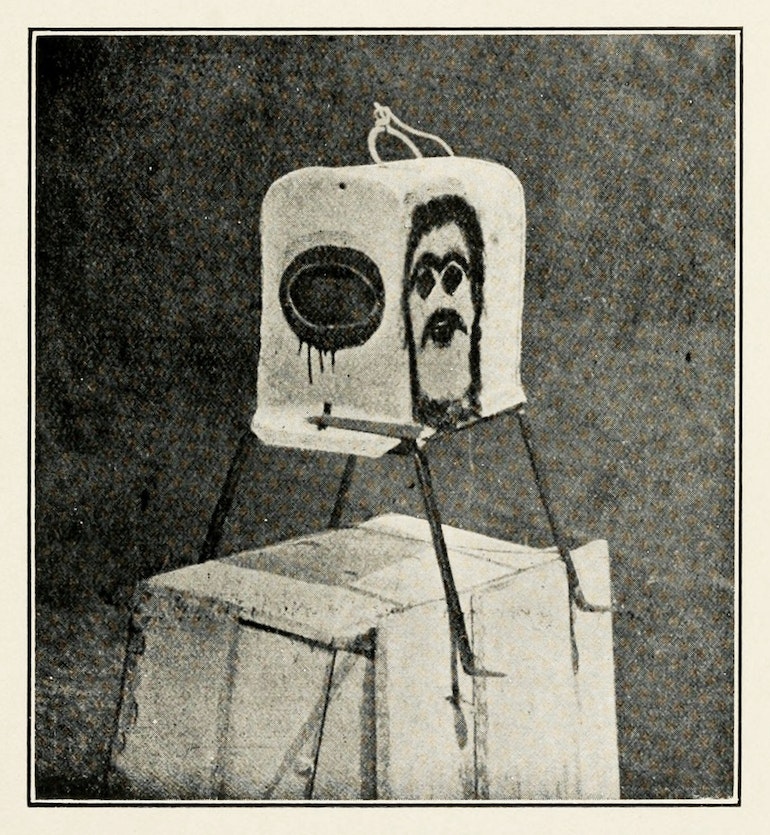 Uncannily resembling an early work of outsider art, Head Gamekeeper D. Green’s “scare-fox” was an altogether utilitarian contraption, devised to send foxes fleeing from his Herefordshire game preserve’s pheasant field. Shutters driven by a clockwork mechanism sent light flashing from three sides of the crude box, while its fourth side bore a badly painted caricature of a human face. Before the “scare-fox”, Green would burn fires at night to keep the foxes from the pheasants, “and even after that used to lose some”. He was certain that two scare-foxes set up in any field or wood would keep the predators away, and had plans to make one with glass sides and bells timed to ring with the shutters.

Lawyer, editor, and indefatigable leader of the “More Game” movement in America, Dwight W. Huntington published this photograph of the scare-fox in Our Wild Fowl and Waders (1910) as part of his campaign to raise American awareness of the devastating depredations caused by “vermin”: a word that Americans used largely to refer to bed lice, but which in British gamekeeping circles had long been applied to any animal — from foxes, weasels, snakes, and stoats to rats, moles, and even shrews — that competed with hunters. Enthusiastically introducing the term in his March 1908 Independent “Game Bird Enemies”, Huntington would routinely employ it for the next three decades while cheerleading for “MORE GAME AND FEWER GAME LAWS”. Two journals he edited — Amateur Sportsman (1909–1912) and The Game Breeder (1912 –1938) — are a unique chronicle of the antagonistic reactions of hunters and “shooters” (waterfowl and other bird gunners) to the early twentieth century growth of the wildlife conservation movement. While Audubon Societies and kindred organizations lobbied legislatures to protect mammals and birds from destruction by both hunters and habitat loss, the Game Conservation Society (founded by Huntington in 1912) marshaled a nationwide campaign to stymie the “naturalists”: his generic and largely derogatory label for all of those who impinged on his dream of making America the world’s leading producer of game animals.

Having long held pride of place as the chief nemesis of game keepers and bird hunters, “Reynard” — the red fox, Vulpes vulpes, a circumpolar predator universally known as the most catlike of the canids — exercised Huntington’s ire more than any other vermin. Conceding that “I enjoy seeing an occasional sly fox about”, Huntington happily reported his own and others’ fox shooting exploits, including the Middle Island Club of Long Island’s outing to celebrate a worthy member’s eighty-second birthday, during which they killed a number of foxes:

From the time the first hound gave tongue Mr. Reynard was on his way. Oh, such music on a sharp, still and pretty morning can only be appreciated by those who know! Well, after chasing this cunning cuss for more than an hour, he was finally headed off by our young member, Mr. Howard Voorhies, who registered his first kill, and arrangements were made to have the pelt tanned and incidentally to decorate the cozy home in Brooklyn.

Like that macabre scare-fox, such accounts sit uneasily for us fox-admiring moderns, who are more likely to find sympathy with Oscar Wilde’s delicious declaration that fox-hunting was “the unspeakable in full pursuit of the uneatable”.