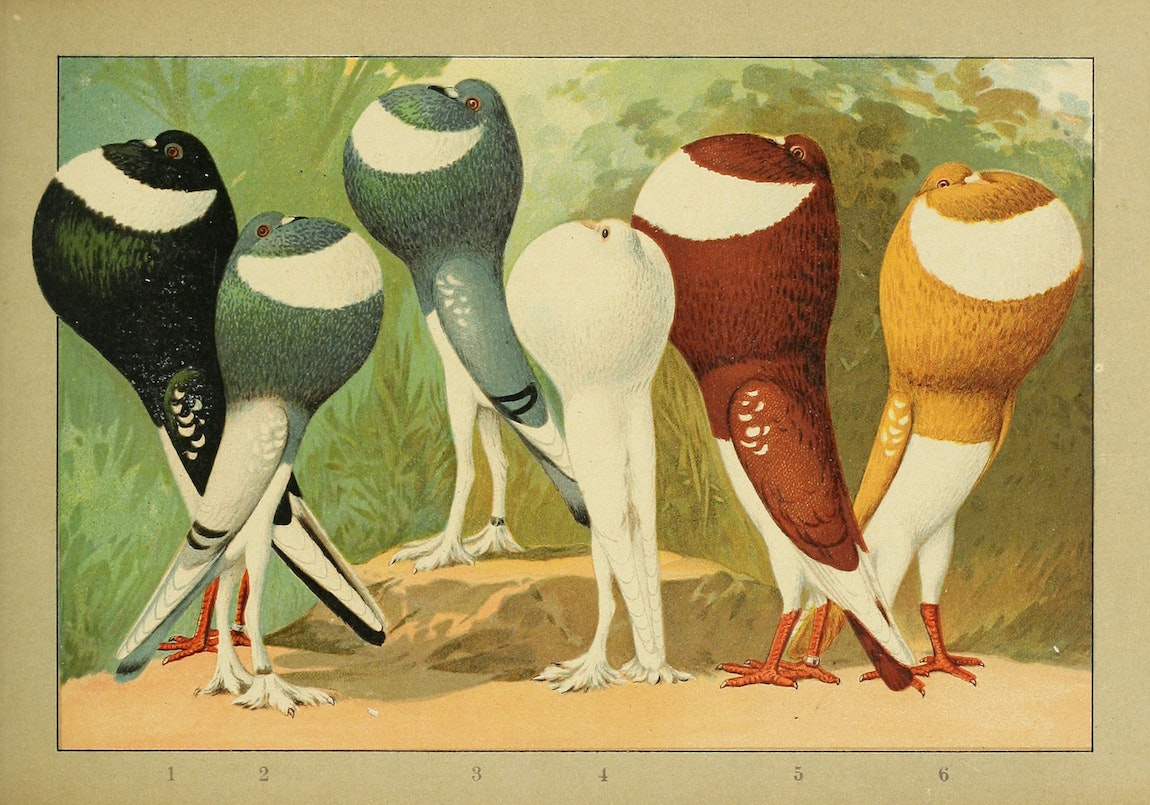 Those who deign to class pigeons as “rats of the sky” have clearly never seen a Pigmy Pouter. Nor, for that matter, a silver Jacobin, named because its ornate headdress (composed of a “hood”, “mane”, and “chain”) resembles the cowl worn by a sect of Dominican monks. Another breed of pigeons are actual nuns, cousins in kind to horsemen, barbs, dragoons, finnikins, and runts. As fanciful as their titles, the diverse appearance of these birds makes one wonder how they can all be classed as pigeon. The bug-eyed Budapest tumbler barely resembles the peacock-like fantail, the cropper, which can balloon its breast to softball proportions, or, indeed, the bizarre frillback, which, at first glance, appears tangled in a mass of perm-treated hair. In the mid-nineteenth century, as Charles Darwin was substantiating his theories of artificial and natural selection, the pigeon served as a proving ground. “Among all the domesticated animals, the pigeons were the most divergent and yet the most clearly related to a single ancestor”, writes James A. Secord. Poised on “a classificatory edge”, they became a “perfect case study in the power of selection”.

Citing Darwin by name in his reference book, Illustriertes Prachtwerk sämtlicher Taubenrassen, Emil Schachtzabel came of age in the paradigm-molting wake of On the Origin of Species (1859), a work in which pigeons play a significant role. A government administrator by day, Schachtzabel’s passion for the bird led to an appointment as president of the Federation of German Poultry Breeders (Bund Deutscher Rassegeflügelzüchter). Yet he remains best known, perhaps, for his Prachtwerk. The lithographs from this work collected below, based on watercolor templates by Anton Schöner, illustrate the seemingly limitless boundaries of domesticated pigeons, as several birds intrude beyond their frames into the margins of the page. Pigeon cultivation weds artistry, Schachtzabel explains, with the manipulated mechanisms of evolution. Describing how marvelous combinations of feathers, shading, and color have emerged through the efforts of the pigeon’s protector — “the thinking man” (den denkenden Menschen) — he ponders what features might appear in future breeds, hoping his book will serve as inspiration.

Schachtzabel combined two knowledge traditions that had not always overlapped: the practical wisdom of pigeon fanciers and the taxonomical theories of naturalists. As described in the Prachtwerk’s preface, Schöner positioned his lithographic pigeons at carefully chosen angles to give the fancier a better sense of golden proportions, toward which his or her own breeds could strive. Schachtzabel’s introduction, on the other hand, recognizes that turn-of-the-century fancying had been reinvigorated by advances in infrastructure — as postal, train, and shipping networks created new opportunities to obtain “fresh material” (frisches Zuchtmaterial) for crossbreeding. Just a few decades earlier, however, it was rare for fanciers to discuss the biological history of their prized columbiformes. “Fanciers almost unanimously believe that the different races are descended from several wild stocks”, wrote Darwin in The Variation of Animals and Plants Under Domestication (1868), “whereas most naturalists believe that all are descended from the Columba livia or rock-pigeon”.

While many may associate the evolutionary biologist with Galapagan finches, critics and editors had tried to trim the wings of his On the Origin of Species before publication. Reverend Whitwell Elwin, who assessed the manuscript, calling it a “wild & foolish piece of imagination”, wrote to the publisher John Murray suggesting that Darwin limit his treatise to the pigeon content: “Every body is interested in pigeons. The book would be reviewed in every journal in the kingdom, & soon be on every table.” Darwinian evolution may owe as much to the HMS Beagle as to a certain gin palace near London’s Borough Market, where the scientist would observe seasoned members of a pigeon club and their specimens. What gripped his mind was the diversity of color and aspect, the spectrum that Schöner would try to capture on the page. If the fanciers were to be believed, and these numerous, domestic breeds were crosses of kaleidoscopic aboriginal stocks, why had ornithologists only observed rock-pigeons in nature, which look far more like our feral city pigeons than any polychromic rarity? The answer, toward which Darwin was homing, involves genetic mutations, selected for by breeders who favored a flashy phenotypic expression. Yet every flamboyant breed descends from the same drab and common species — Columba livia.

That is to say that next time you see a street pigeon, beak deep in a half-eaten kebab, know that its DNA contains a pallet richer than any painter’s dream, which — with a few centuries of strategic mating — could appear in the plumage of birds yet to come.