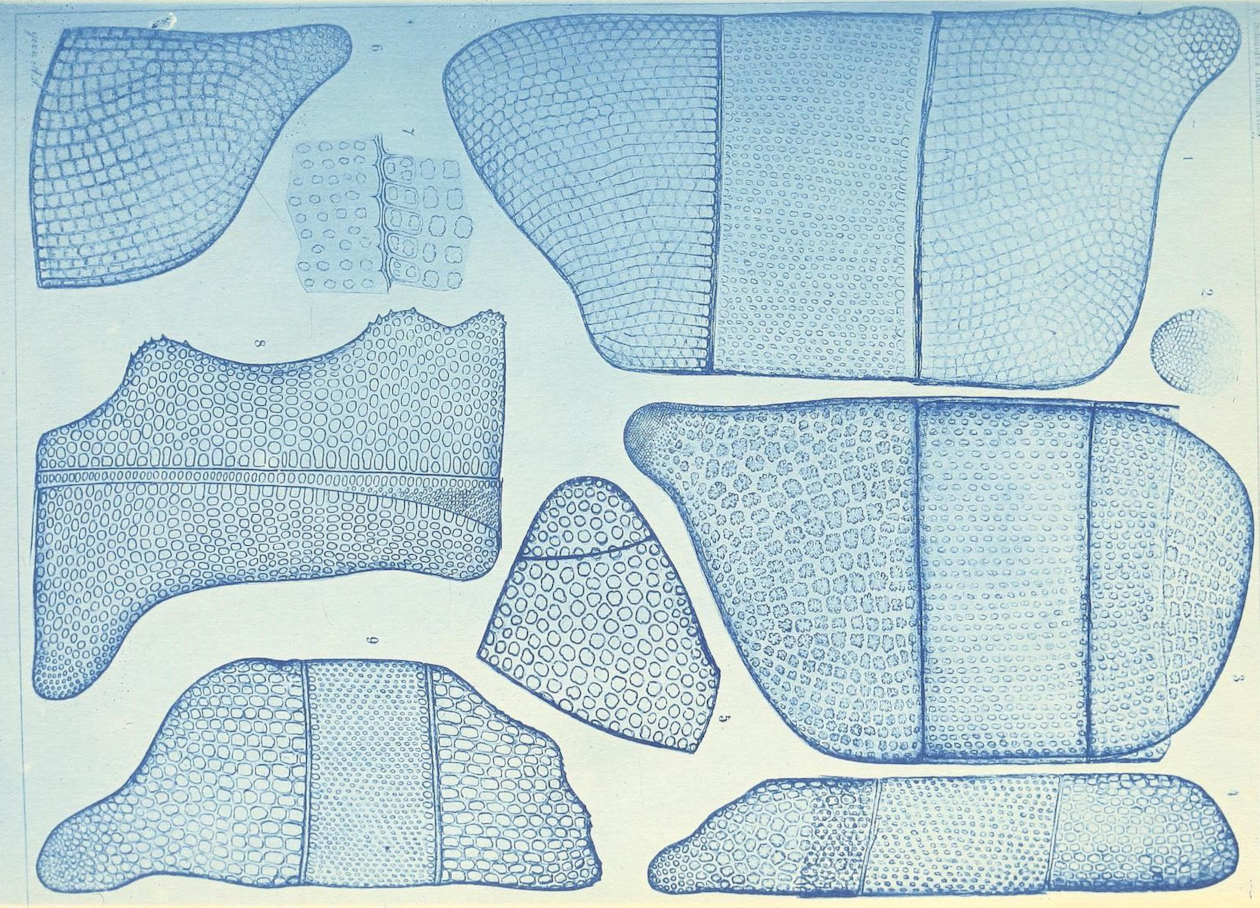 “Diatoms are algae that live in houses made of glass”, write the editors of the North American diatom society. Unicellular organisms that sometimes form colonies, these plankton have a siliceous skeleton known as a frustule, and thrive everywhere, in any type of water: saline, brackish, or fresh. The scale of diatoms varies widely, as does their geometry. Some are about three micrometers in diameter, others are almost visible to the unassisted eye. Some are circular with spines resembling “Martian antennae”, writes Mary Ann Tiffany and Stephen S. Nagy in a book chapter about “The Beauty of Diatoms”, others sport “a fringe-like skirt”. Accordingly, researchers seem to always have a favorite specimen, from an aesthetic point of view, and nineteenth-century enthusiasts went so far as to arrange ornamental slides of diatoms, a practice still in existence today. For the German natural scientist and clergyman Adolf Schmidt (1812–1899), who edited the catalogue in which the images below first appeared, the most beautiful diatom was Melosira, which looks like a caterpillar, composed of filamentous cells.

While diatoms helped create the conditions for animal life, and continue to account for twenty percent of the photosynthesis that occurs on earth, they were not observed by humans until relatively recently. Scholars think the first reference to diatoms comes from a 1703 contribution to Philosophical Transactions by an unknown Englishman. Using a crude microscope to examine the roots of duckweeds, the man “saw adhering to them (and sometimes separate in the water) many pretty branches, compos’d of rectangular oblongs and exact squares”. In accordance with the principle of “multiple discovery” or “simultaneous invention”, it seems that the Dutch scientist Antonie van Leeuwenhoek may have observed diatoms on Christmas day, the previous year, while gazing at the same kind of roots — though he believed the shapes to be animalcules, a term previously coined for the microorganisms he had glimpsed in rainwater.

Almost immediately these tiny algae started causing trouble. According to prevailing theories of eighteenth-century biological classification, plants were not supposed to move, suggesting that diatoms were indeed minuscule animals. (We now know that diatoms are non-motile, capable only of “limited movement along a substrate by secretion of mucilaginous material along a slit-like groove or channel called a raphe”.) Advances in microscopy during the nineteenth century allowed for better observation and classification of diatoms the world over, leading to illustrations by Astrid Cleve-Euler, P. T. Cleve, Christian Gottfied Ehrenberg, Albert Grunow, Henri Ferdinand Van Heurck, and Adolph Schmidt.

The first instalment of Schmidt’s Atlas appeared in 1874, in collaboration with Gründler, Grunow, Janesch, Weissflog, and Witt, and was frequently updated with contributions by other colleagues thereafter, until the final edition in 1959. While these illustrations from the catalogue are not as aestheticized as Ernst Haeckel’s depiction of diatoms in Kunstformen der Natur (1904), and lack the color of more modern diatom images, their contribution to the history of science cannot be overstated. Deeming the Atlas “world-famous” and “gigantic”, a group of scientists researching the nanotechnological possibilities of diatoms believe that Schmidt “should be given the honour due to him” by calling the researcher by his clerical title: “‘the Archidiaconus [archdeacon] Schmidt’ — certainly the most impressive title a diatomist could have”.

Featured below are images from an 1890 edition of Schmidt's Atlas, a compilation missing plates 1 to 80 but printed in a most striking blue. We are not quite sure how its pages have ended up with such a hue — perhaps the result of a type of early photocopying? While the diatoms seem at ease in this aqueous pallet, you can also view more traditional printings of the plates here.