The 1870s were a decade flooded with temperance literature in America. “Moral suasion” — the attempt to appeal to people through stories, arguments, and threats — was the usual strategy. Probably there is no better way to introduce Edward Carswell’s highly morally suasive Temperance Stories and Sketches — aimed at young readers and published in 1879 — than to quote its opening lines:

Let us suppose a case. Suppose that any of you, my young friends, were standing by the river Niagara, and you saw many people in the river dead and dying — men and women, girls and boys, and even little babies — how would you feel? And suppose you saw them come headlong over the awful cataract, some dashed upon the rocks, some being torn in the whirlpool or choked in the rapids, some trying with desperate energy to reach the shore, while others in despair floated down to death without even a struggle for life... Oh! You would cry, this is dreadful. Now, where do they get into the river? Can nothing be done to save them?

This intensity about the dangers of alcohol, tobacco, and gambling underlies the verse, the stories, and the illustrations that follow — all of them apparently created by Carswell. “Old Rye Makes a Speech” gives a very good idea of his usual approach:

I was made to be eaten,
And not to be drank;
To be thrashed in a barn,
Not soaked in a tank.
I come as a blessing
When put through a mill;
As a blight and a curse
When run through a still.
Make me up into loaves,
And your children are fed;
But if into a drink,
I will starve them instead.

“The Bird’s Conundrum” follows a similar pattern. In it, young girl asks why her pet bird was so rude to her cousin and uncle, only to have the bird tell her it was because they were drinking and smoking, which he found both physically and morally repugnant.

Some of the poems and prose in Temperance Stories and Sketches are quite a bit darker in tone. “The Four Seasons”, for example, illustrates the career of the intemperate man, from youth’s “cider or a mild cigar”, to middle age’s “wine, and card, or dice”, to winding up, as an old man, “a bloated wreck without a friend, / Who in a ditch or prison finds the end”.

Perhaps the most fascinating of Carswell’s pro-temperance inventions, however, are the so-called “Shadow Pictures”, which hide the shape of drunken figures (some oddly inviting in their peaceful slumber) amongst the branches, stumps, fences, and stones of various landscapes. Also worth a mention are the “Hieroglyphic Rebuses”, which force the reader to decode them for yet more clarion calls to be clean, sober, charitable, and kind.

It’s questionable whether such cryptic exercises — or for that matter any of Carswell’s texts or images — were lastingly successful in dissuading people from overindulging in various vices. (Mark Twain — who once wrote that “intemperate temperance injures the cause of temperance” — would have had his doubts.) But, as artefacts of a political movement and late-nineteenth-century American art, they continue to fascinate. 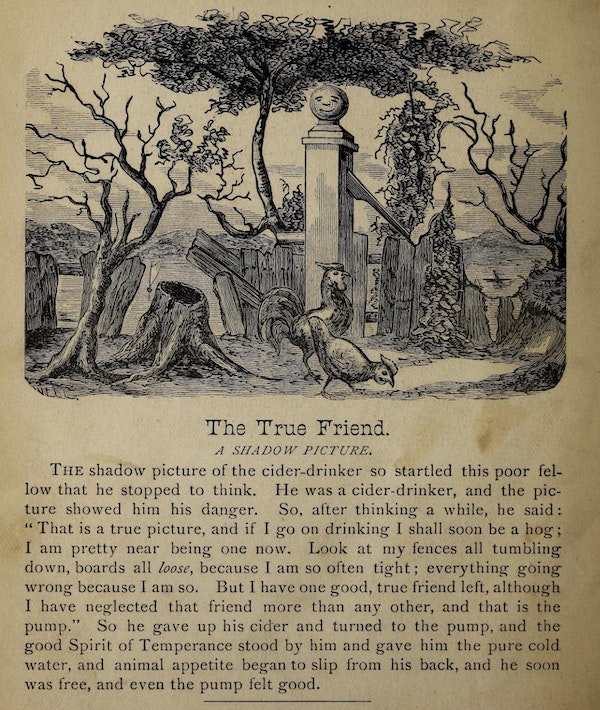 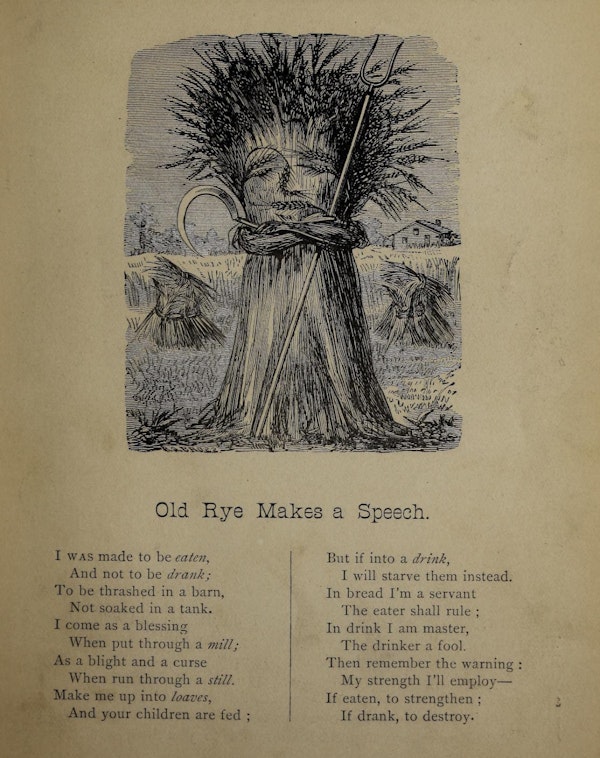 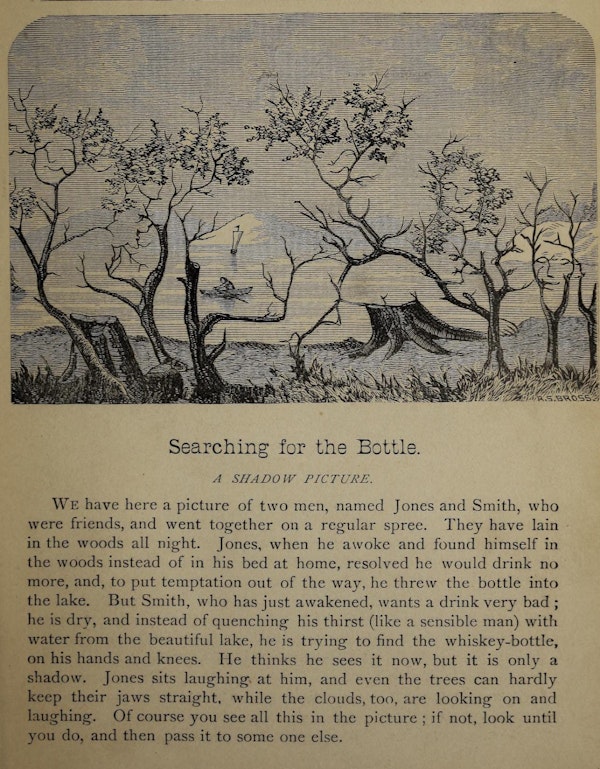 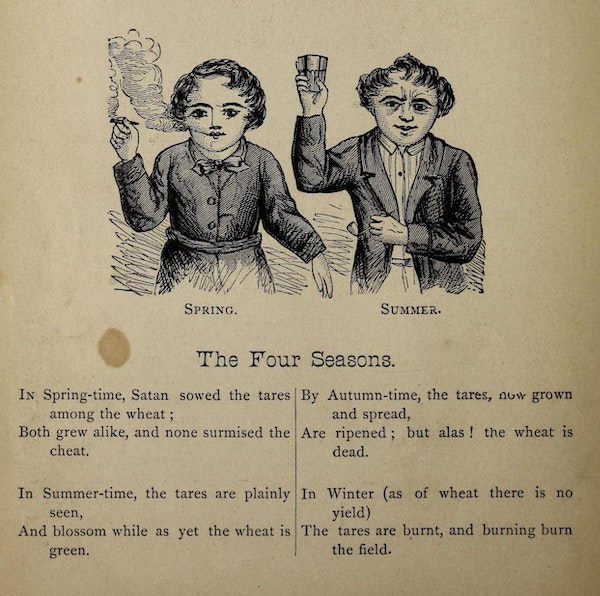 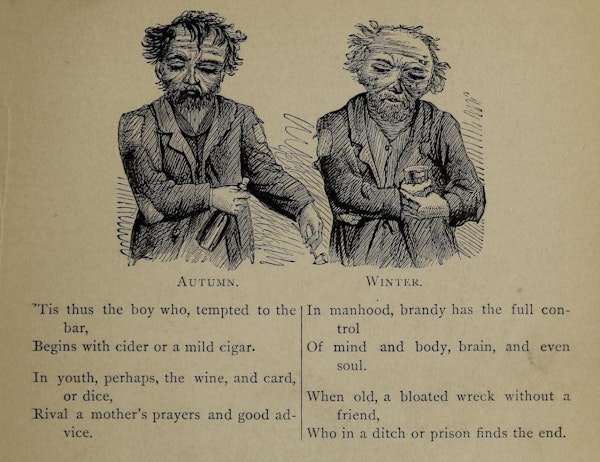 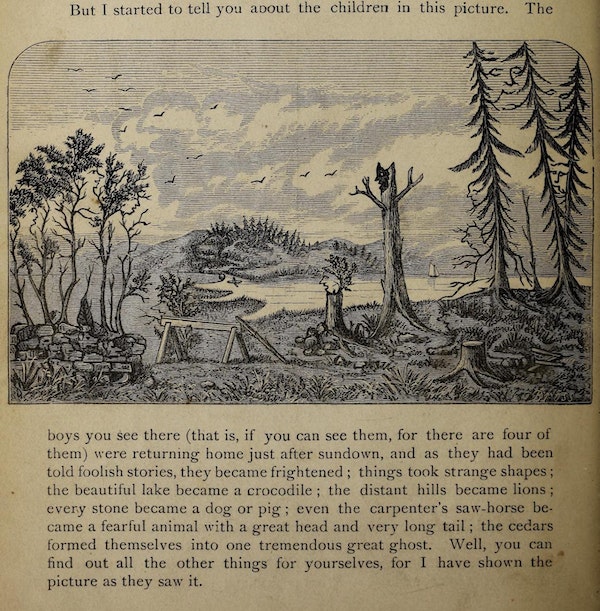 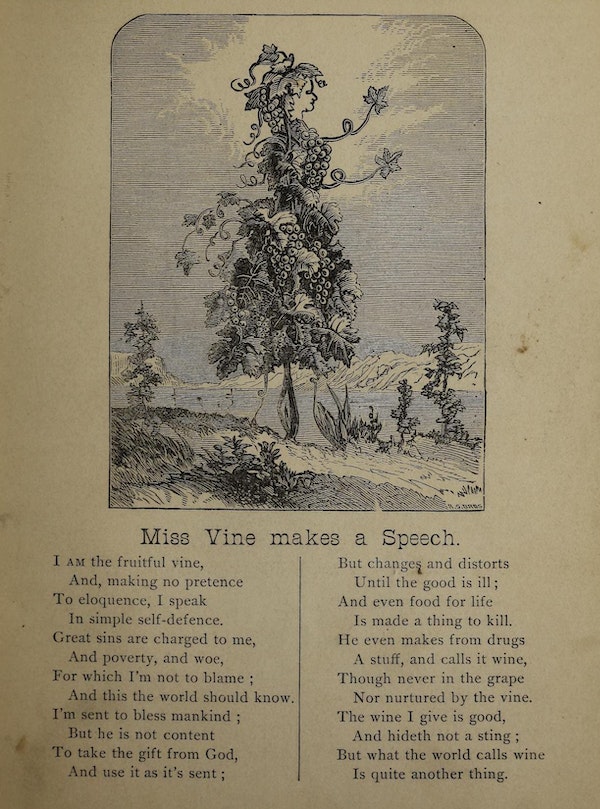 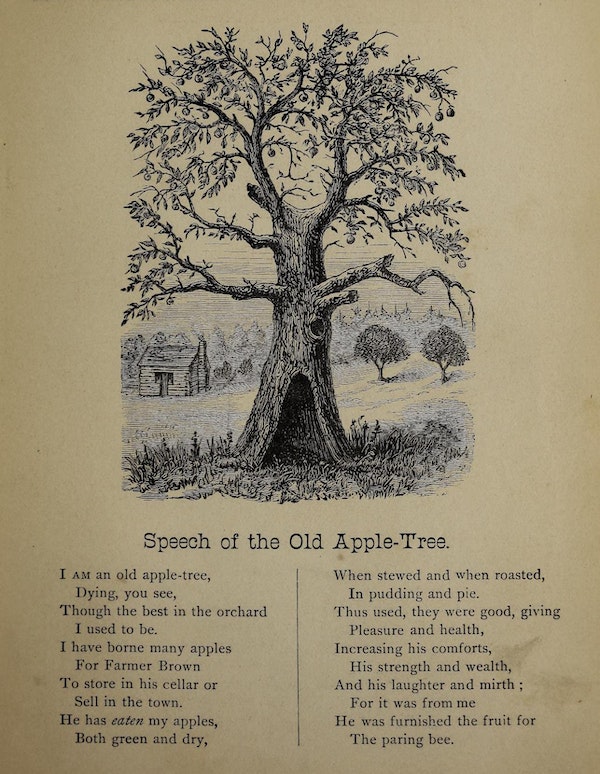 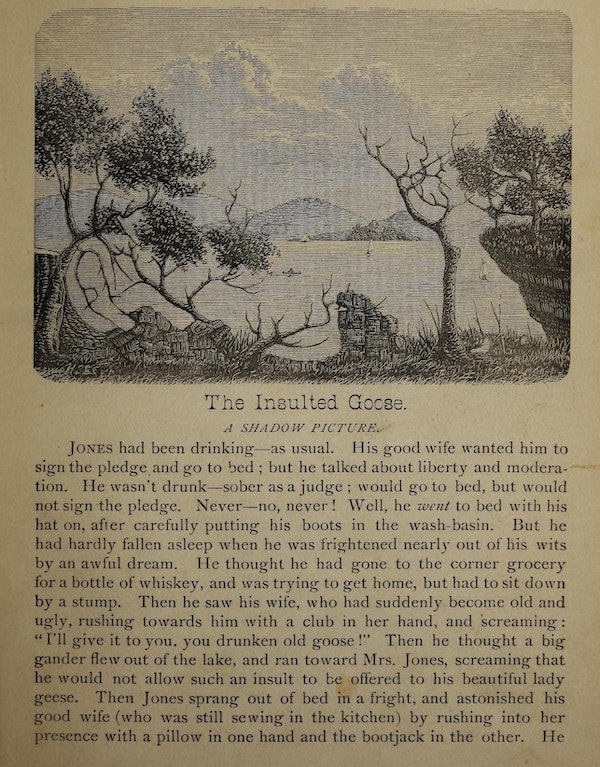 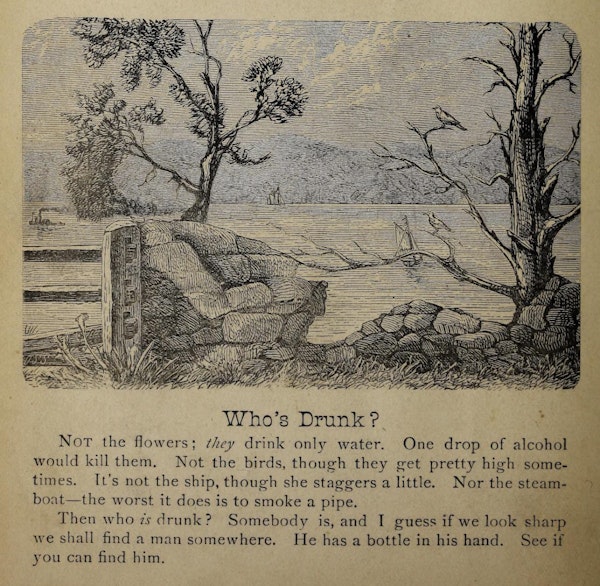 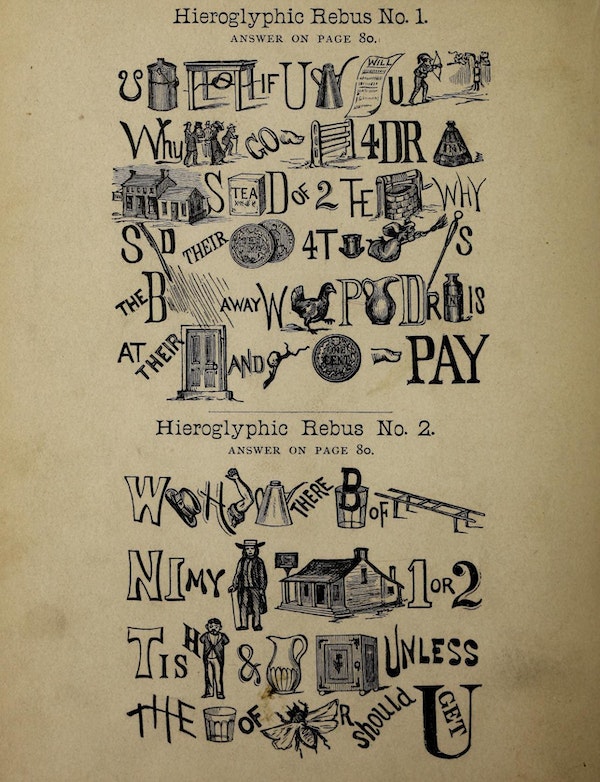 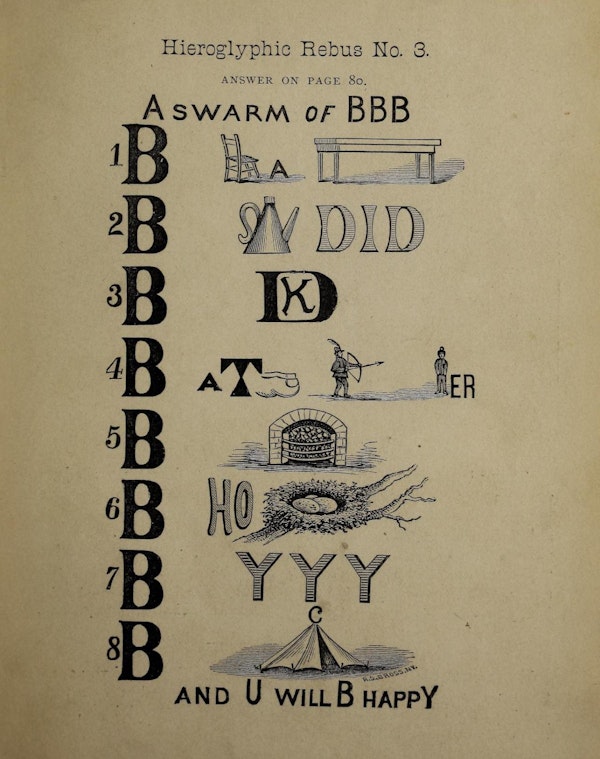 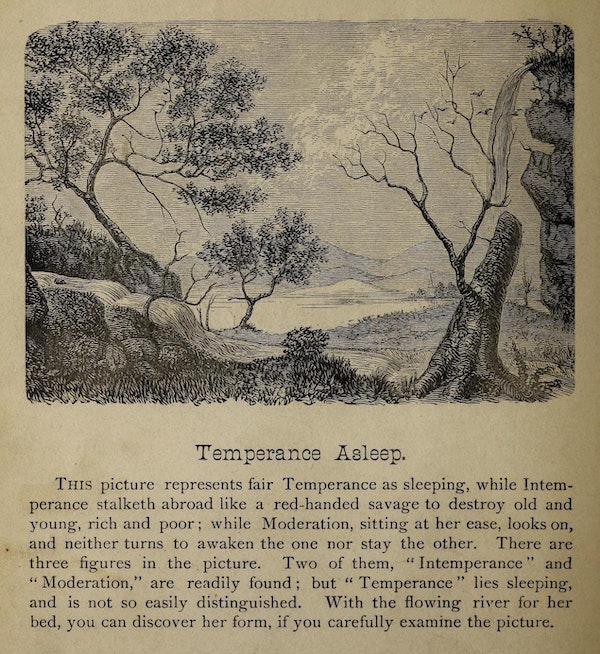