The Diagrammatic Writings of an Asylum Patient (1870)

These two images are from the book On the Writing of the Insane (1870) by G. Mackenzie Bacon, medical superintendant at an asylum (now Fulbourn Hospital) located near Cambridge, England. The pictures are the product of a "respectable artisan of considerable intelligence [who] was sent to the Cambridgeshire Asylum after being nearly three years in a melancholy mood". Bacon describes how the unnamed patient, for the two years he was committed, spent "much of his time writing — sometimes verses, at others long letters of the most rambling character, and in drawing extraordinary diagrams." The two images shown here were drawn on both sides of the same small half sheet of paper, and the patient, "as though anxious, in the exuberance of his fancy, to make the fullest use of his opportunities, [...] filled up every morsel of the surface — to the very edge — not leaving an atom of margin." 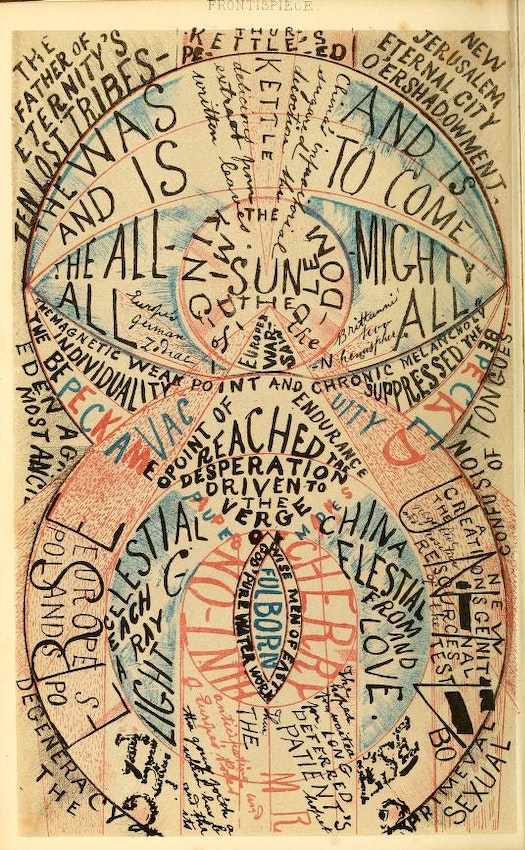 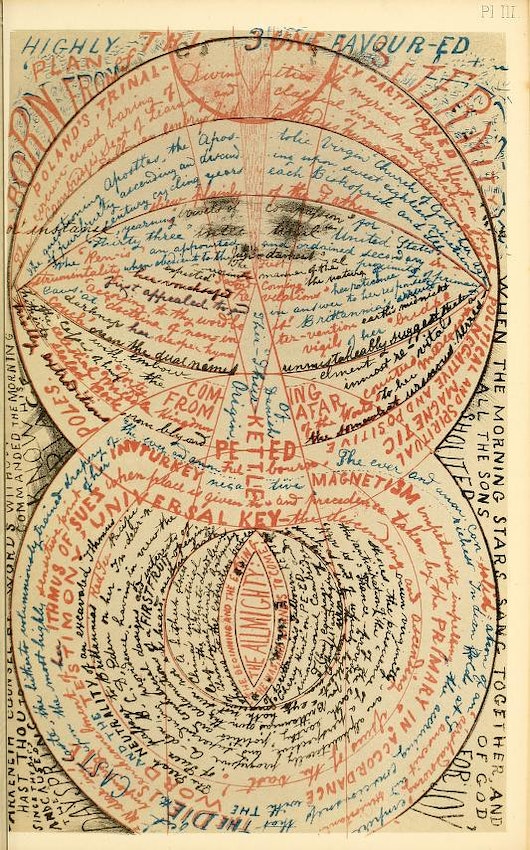 Bacon goes on to explain that the man, after leaving the asylum, went "to work at his trade, and, by steady application, succeeded in arriving at a certain degree of prosperity, but some two or three years later he began to write very strangely again, and had some of his odd productions printed ; yet all this time he kept at work, earned plenty of money, conducted his business very sensibly, and would converse reasonably."

After a visit from a medical man who tried to dissuade him from writing this way the man wrote the following letter:

To write or not to write, that is the question. Whether tis nobler in the mind to follow the visit of the great 'Fulbourn' with 'chronic melancholy' expressions of regret (withheld when he was here) that, as the Fates would have it, we were so little prepared to receive him, and to evince my humble desire to do honour to his visit. My Fulbourn star, but an instant seen, like a meteor's flash, a blank when gone. The dust of ages covering my little sanctum parlour room, the available drapery to greet the Doctor, stowed away through the midst of the regenerating (water and scrubbing - cleanliness next to godliness, political and spiritual) cleansing of a little world. The Great Physician walked, bedimmed by the 'dark ages' the long passage of Western Enterprise, leading to the curvatures of rising Eastern morn. The rounded configuration of Lunar (tics) garden's lives an o'ershadowment on Britannia's vortex...

Unfortunately things ended sadly for the man. As Bacon recounts: "In the course of another year he had some domestic troubles, which upset him a good deal, and he ended by drowning himself one day in a public spot".

(Images taken from On the Writing of the Insane (1870), housed at the Internet Archive, contributed by the Francis A. Countway Library of Medicine via the Medical Heritage Library. Hat-tip to Pinterest user Marisela Norte).

You can also see the full book, including more images, over at the post in our Texts collection.