The Geometric Landscapes of Lorenz Stoer (1567) 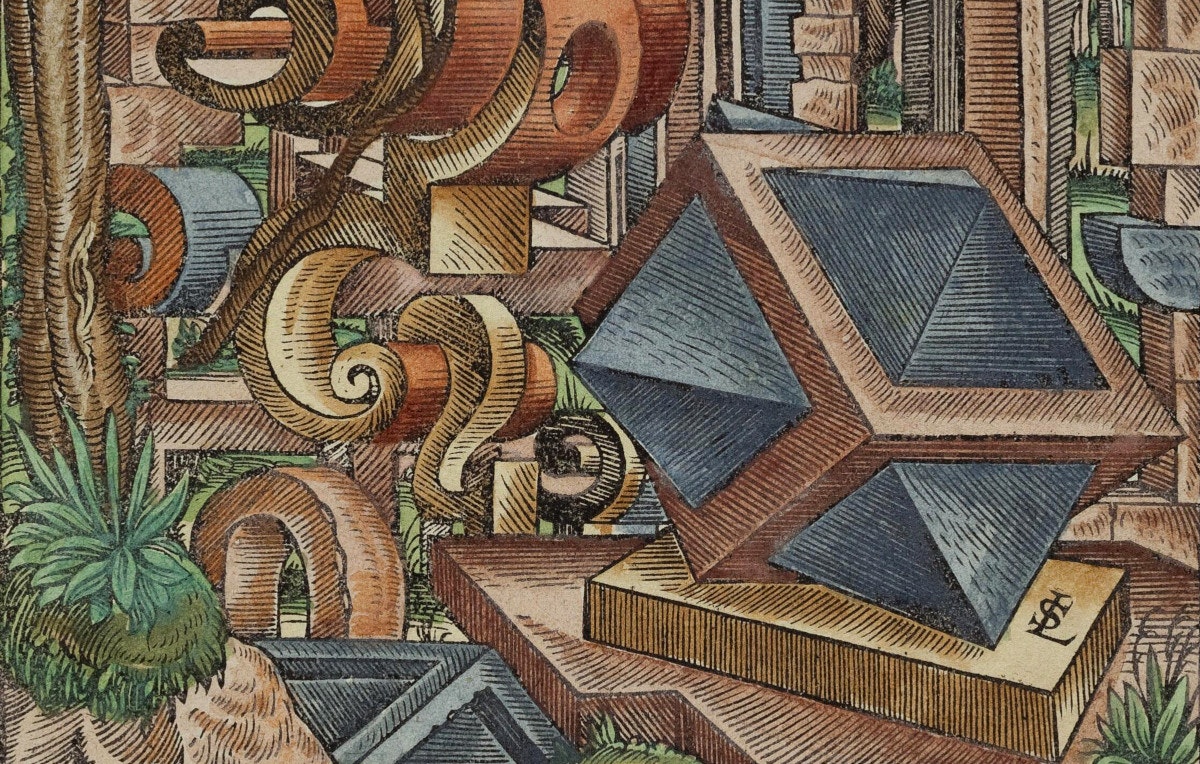 Though these images may at first appear the handiwork of a Futurist or M. C. Escher imitator, they are in fact the work of a sixteenth-century artist named Lorenz Stoer.

Not much is known about Stoer. Born in Nuremberg in the 1530s, he is said to have been a student of a student of Albrecht Dürer (who introduced the principles of linear perspective into northern Europe after studying them in Bologna). Stoer’s name does not appear in the records, however, until April 8, 1555, when Emperor Ferdinand I grants him the exclusive right to print a book titled Perspectiva a la Laurentia Stoëro. As it happened, this book was either never published or all copies of it have been lost to time. In the winter of 1556–1557 Stoer’s wife, Anna, died (as can be gleaned from the Nürnberger Totengeläutbuch, which lists payments for the tolling of death-knells). Perhaps because of this loss, or because of mounting debts, as early as 1558 he moved to Augsburg, where he registered as a painter and draughtsman. In 1594, he returned to Nuremberg. His last drawing is dated 1599.

During his long residence in Augsburg, Stoer published his only (or only surviving) book, Geometria et Perspectiva. This singular creation, which is not at all like most of the text-heavy treatises on linear perspective printed in the sixteenth century, contains no typography and very little in the way of words — none at all, apart from the title page, which reads (in Christopher S. Wood’s translation):

Geometria et Perspectiva, containing various ruined buildings, useful to intarsia workers, as well as for the special pleasure of many other amateurs; ordered and arranged by Lorenz Stoer, painter and citizen of Augsburg.

This long title is surrounded by an oval ornamental band with the motto “Who would do right by everyone? No one would even try”, four regular polyhedrons, and four irregular solids.

Intended to be “read” by intarsia workers (that is, artists who inlay sections of wood to decorate floors, walls, and furniture), Geometria et Perspectiva did indeed leave its mark on northern European furniture-making: the Metropolitan Museum of Art in New York and the Albert and Victoria Museum in London both possess cabinets with decorations in Stoer’s style. But by now the book has outlived and outstripped its original purpose.

What makes Geometria et Perspectiva so enduringly remarkable, from Wood’s perspective, is that it:

makes no effort to teach perspective or to provide rules; it simply gives results, pictures in perspective. The eleven numbered woodcuts all use the same formula: a complex stereometric solid or combination of solids juxtaposed to a kind of dreamlike thicket of solid volutes, brackets, and frames, a scrollwork trellis. The polyhedrons and the scrollwork are smounted in the foregrounds on terraced platforms before landscape settings with masses of round-arched ruins and sometimes obelisks, columns, or staircases.

What first strikes non-specialist eyes is how very modern Stoer’s pictures look — how abstract and even proto-surrealist. The copy of Geometria et Perspectiva digitized by the University of Tübingen, which we have drawn on here, is all the more striking for its use of color. (Most reproductions of the book are black and white.)