The Hermit; or, The Unparalleled Sufferings, and Surprising Adventures, of Philip Quarll (1814)

The hermit or, The unparalleled sufferings, and surprising adventures, of Philip Quarll, an Englishman, who was discovered by Mr. Dorrington, a Bristol-merchant, upon an uninhabited island, in the South-sea, where he lived about fifty years, without any human assistance; 1814; H. Mozley, Gainsborough.

A story thought to be by Peter Longueville - writing under the pseudonym of Edward Dorrington - about Philip Quarll, a Crusoe-style castaway, who spends 50 years alone on an uninhabited island island of monkeys and pomegranate fields far off the coast of Mexico. When eventually he is eventually found in 1715 by the narrator Edward Dorrington - an 18th-century trader from Bristol, England - Quarll refuses to leave his island, carefully explaining to his would-be rescuer that he would not dream of leaving the place he now considered home. In the course of his 50 years Quarll had become the self-appointed king of ""his country', and at the time of Dorrington's arrival, was accompanied everywhere he went by a loyal monkey as a sidekick. At his idyllic home with thatched roof the white-haired Quarll laid on a dinner for his unexpected guest - of soup, meat and fish - all served in shining plates of seashells. Later, Dorrington remarks that the meal surpassed anything he had ever eaten in his native England. Quarll explains to his somewhat bemused visitors: ""I was shipwrecked, thanks to my Maker, and was cast away. Were I made emperor of the universe, I would not be concerned with the world again, nor would you require me, did you but know the happiness I enjoy out of it."" Quarll then handed Dorrington his ""memorial"" - a tidy bundle of rolled parchment diaries - from which this story is told.

Originally published in 1727, the story was hugely popular in 18th century England, going through 11 editions alone between 1759 and 1783, and between 1780 and 1788 published as a serial in The Novelist's Magazine. It no doubt fooled many a reader into believing in it's veracity, as it did The Public Domain Review when first stumbled across! 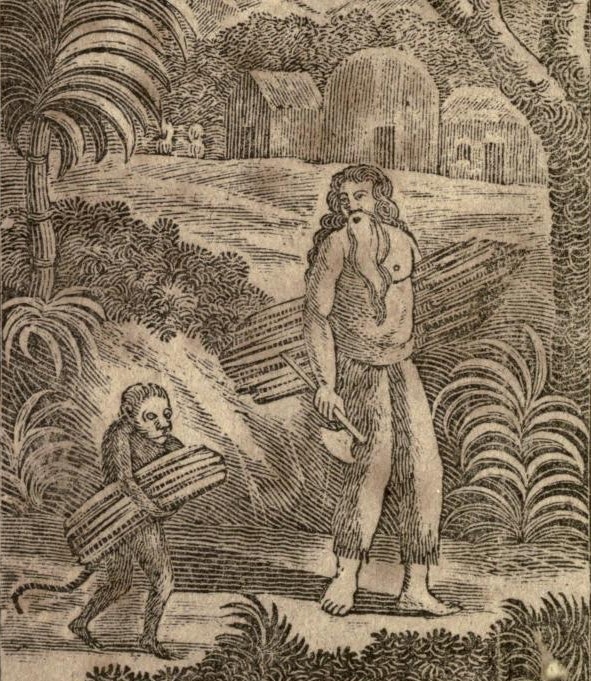