Henry Box Brown and Charles Stearns, Narrative of Henry Box Brown: Who Escaped From Slavery Enclosed in a Box Three Feet Long and Two Wide and Two and a Half High (Boston: Brown and Stearns, 1849).

Henry Brown was born a slave, sometime around 1815, in Louisa County, Virginia. After the farmer who owned his family died, the teenage Brown was separated from his parents and siblings, and sent to work in a tobacco factory in the city of Richmond. There, at the Baptist Church, he fell in love with a woman named Nancy, whom he married in 1836. It was in the late 1840s, when the pregnant Nancy and their three children were sold to a Methodist preacher in North Carolina, that Brown decided he would try escaping to freedom in the North.

“Ordinary modes of travel he concluded might prove disastrous to his hopes”, the abolitionist William Still writes of Brown in The Underground Railroad; “he, therefore, hit upon a new invention altogether, which was to have himself boxed up and forwarded to Philadelphia direct by express.” With the aid of a Massachusetts-born white man called Samuel Smith, who, in exchange for a sum of money, arranged for the box to be received at the office of the Pennsylvania Anti-Slavery Society in downtown Philadelphia, Brown had himself shipped via Adams Express on March 23, 1849. After twenty-six hours of rough handling by deliverymen, he was pried from his coffin and — being a deeply religious man — sung a song of thanksgiving he had written, based on Psalm 40. 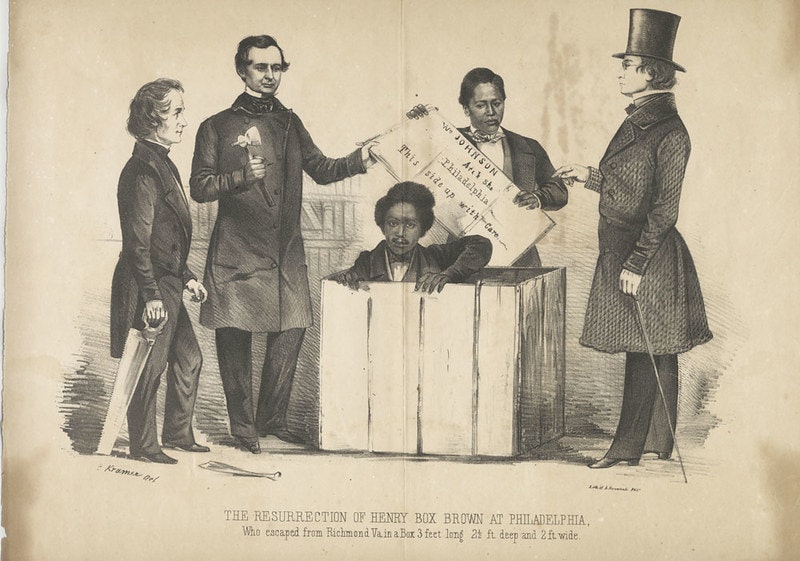 “To a great extent”, the literary scholar John Ernest writes, “Brown himself promoted his story and crafted his own fame, from the song he sang when he emerged from his box to the career he launched after his story became public knowledge.” Indeed, in the months directly following his escape, Brown took “Box” as his middle name; published Narrative of Henry Box Brown, who Escaped from Slavery Enclosed in a Box 3 Feet Long and 2 Wide, Written From a Statement of Facts Made By Himself; and went on tour in New England, telling his story and singing songs of his own composition.

By the end of 1849, he was already putting some of the profits from his book to create a moving panorama called Henry Box Brown’s Mirror of Slavery, which would premiere in Boston in April 1850. According to Ernest, this panorama consisted of a series of paintings on a sheet of canvas reported to be 50,000 feet long that would be gradually unwound to reveal successive scenes related to Brown’s personal experience and to the history of slavery and the slave trade.

By 1851, Brown was internationally well known. In England, where he moved after the passage of the Fugitive Slave Law the previous year, he continued to speak, sing, and present his panorama, as well as to stage reenactments of his escape, arranging to have himself shipped from Bradford to Leeds to bring attention to the American abolitionist cause. He also published a second, revised version of his Narrative, which included more information about his escape, as well as the lyrics of several of his songs. 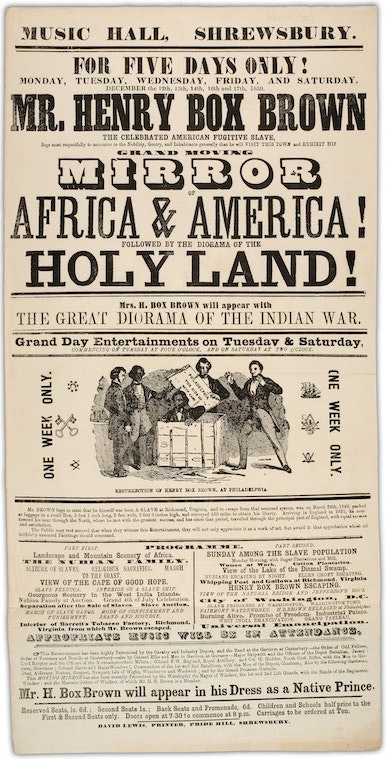 For the rest of his life, Brown remained a performer. In the 1860s, after the Civil War broke out, he began touring as a mesmerist and conjurer — first in England and later in North America, where he returned in 1875, appearing under the name “Prof. H. Box Brown”. A showman par excellence, Brown never sensationalized the hell of slavery. “The tale of my own sufferings is not one of great interest to those who delight to read of hair-breadth adventures, of tragical occurrences, and scenes of blood,” Brown insists, with extreme humility, in his Narrative: “my life, even in slavery, has been in many respects comparatively comfortable.”

In the hundred and seventy years since Brown’s daring getaway, he has been the subject of everything from documentaries and museum exhibits to performance pieces and operas. The story has, after all, a heroic, almost Houdini-esque tinge of romance. Still, it’s essential to remember the context of Brown’s heroism. In the nineteenth century, Ernest writes, “audiences who heard Brown speak knew that a central part of his story involved the loss of his wife and children”. For the last hundred or more years, however, “attention to Brown’s story has focused primarily on his escape, even on the dimensions of the box itself, and on his subsequent career as a public lecturer and performer” — diminishing the depths of pain, and hope, that led Brown to hatch his plan in the first place.

Brown was never reunited with Nancy and their children. It would have been unlikely, if not impossible, that he would have been able to find them after emancipation; their surnames, among other things, would long since have changed. In 1855, Brown was remarried to Jane Floyd (the daughter of a Cornish tin worker) and in later years toured with her and their three children, performing as a family act until Brown’s death in Toronto in 1897.

The Narrative of Henry Box Brown takes the reader back before the box came into picture, giving us a glimpse of an extraordinary human being. Read more about Henry Box Brown here, and purchase John Ernest’s excellent edition of the Narrative (second edition) here.