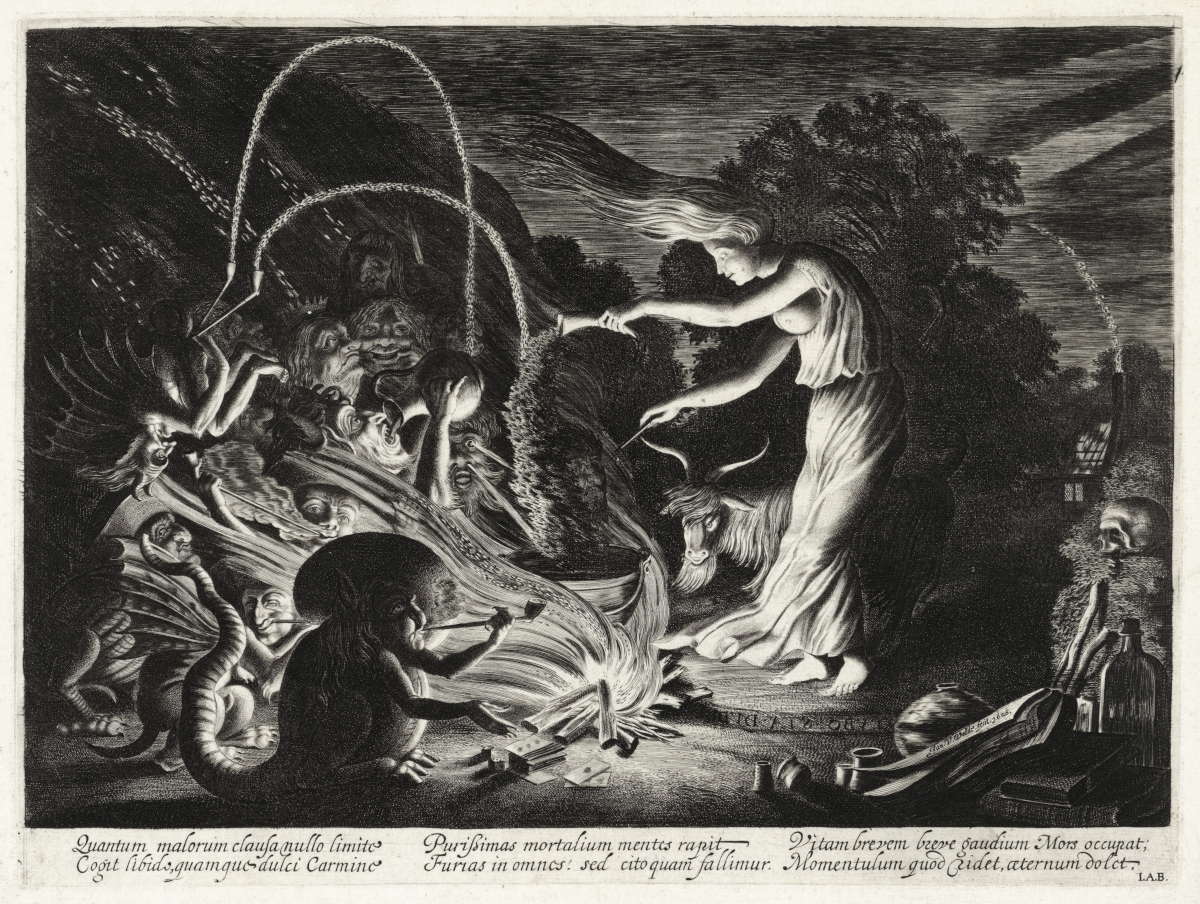 This remarkable engraving of a sorceress mid-conjure is the work of Dutch Golden Age painter and engraver Jan van de Velde the younger. In Van de Velde's energetic and artfully arranged scene we see a young sorceress at work above a fire and, cavorting in its windswept flames, a motley crew of various demonic “familiars”. Amid the talons, wings, and characterful faces, there are pipes-a-plenty, with two notably placed up a demon's bum and streaming with powders in elegant arcs. The Latin at the base of the print gives a clue as to the meaning of the print, which seems to be a commentary on the perils of temptation:

“What evils Desire commands, in the small secluded place; who, by sweet incantation, overcomes the minds of the purest mortals, induces frenzy in everyone! But how quickly it slips by; Death overtakes brief life, brief delights. Laughing for a moment, in eternity suffering regret.” (Translation by Ross Caldwell.) The sentiment seems to be backed up by the presence of dice and cards in the foreground, symbols of the vice of gambling and fleeting pleasure.

While this image may meet our eyes today in a positive and almost joyful manner, behind there lies a much darker history. Between the years 1560–1630 Europe suffered its most intense and violent period of witch-trials. The Little Ice Age decimated crops and the impoverished found their scapegoat in the figure of the witch. The Thirty Years War (1618–1648) added still more devastation and chaos into the mix. The year of this print's creation, 1626, saw the birth of some of the worst and most deadly witch-trials to occur in Europe — in Bamberg and Würzburg, and elsewhere in central Germany — which together led to the torture and murder of more than 1000 people (mostly women).

Related reading: our essay “Woodcuts and Witches”, in which Jon Crabb explores the witch craze of early modern Europe, and how the concurrent rise of the mass-produced woodcut helped forge the archetype of the broom-riding crone — complete with cauldron and cats — so familiar today.