The Triumphal Arch of Emperor Maximilian I (1515) 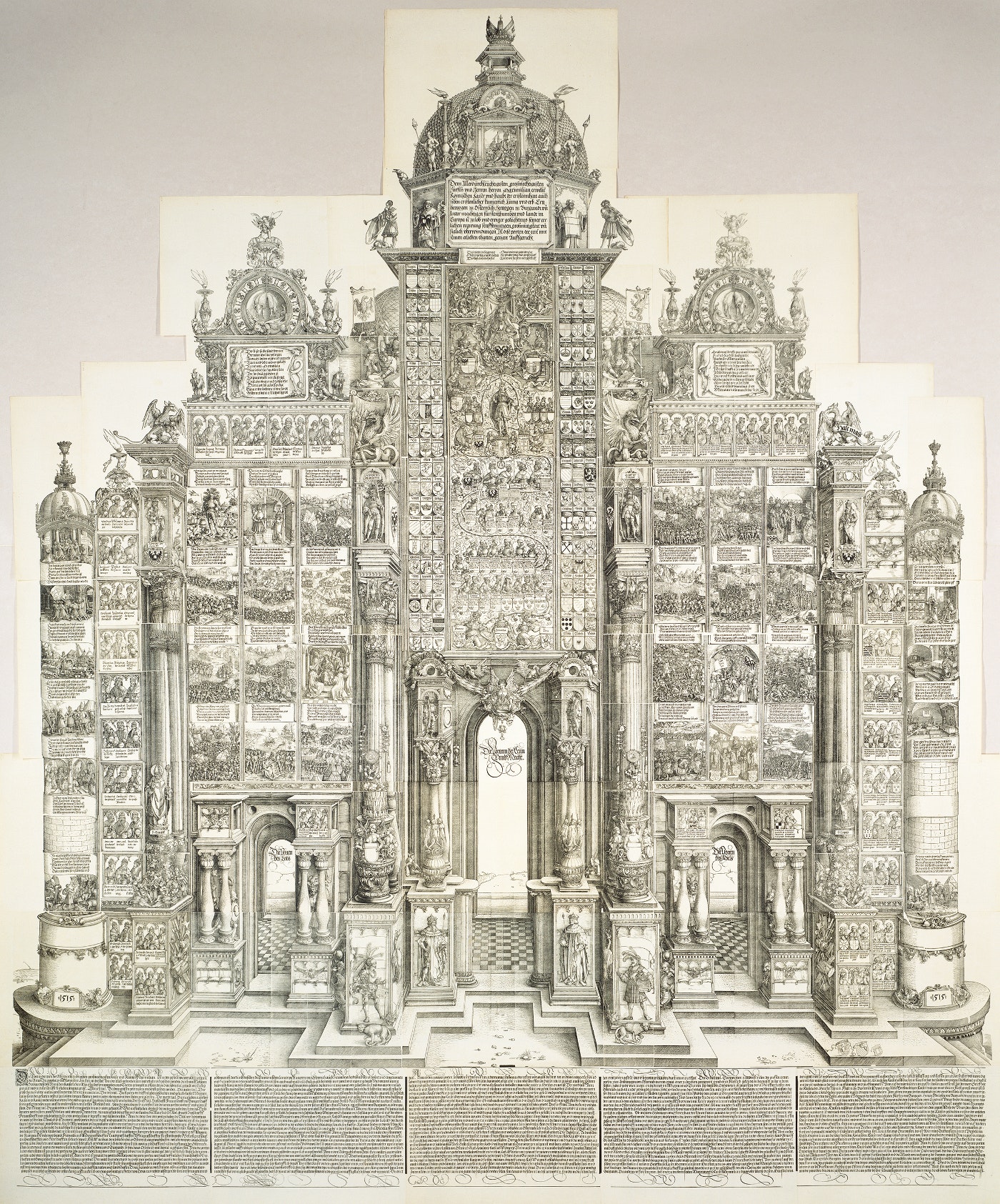 Holy Roman Emperor Maximilian commissioned this extraordinary, grandiose triumphal arch in around 1515 to glorify himself and his ancestors. Never a blueprint for a real arch, it was designed to decorate the walls of town halls and ducal palaces throughout the Empire. It was modelled on the arches of the emperors of ancient Rome and made by pressing a whopping 195 woodcuts onto 36 sheets of paper, to form a huge 3.57 by 2.95 metre composite print. Expressing the grandeur, nobility and (even if it does look a little top heavy) stability of the House of Hapsburg, it must be one of the most ornate propaganda posters in print history. The idea was to induce obedience in its central European audiences. As Neil MacGregor put it in Germany (2014), "it suggested (very economically) that at any moment the Emperor himself might arrive in triumph." For Maximilian, tessellated paper had several advantages to tessellated stone. It gave the artists involved access to an imaginative realm free of gravitational concerns. It was also cheaper and easier to disseminate — the first edition of the print ran to seven hundred copies. Most of its woodcuts were designed by Albrecht Dürer, from whom Maximilian commissioned two other gigantic self-glorifying composite prints, including a Triumphal Procession 54 metres in length. These prints are some of the earliest and finest examples of imperial propaganda, or “paper grandeur” as the art historian Hyatt Mayor has dubbed it.

The Triumphal Arch is both allegorical and specific. It features three gates devoted to (from left to right) Praise, Honour, and Nobility. Above the central gate of Honour a family tree reaches back as far as the mythical Francia, Sicambria and Troia. Atop the gates of Praise and Nobility are depictions of key events from Maximilian’s reign. These are flanked by a column of his ancestors on the right and busts of other emperors and kings on the left. The outermost towers on both sides depict Maximilian’s private life. It is clear from the different styles on show that Dürer subcontracted to his pupils the execution of most of the historical scenes, the family tree in the centre, and the left half of the ornamental framework.

The seven hundred prints of the first edition were intended for hand colouring but very few coloured examples survive. The British Museum has published a great scan of their monochrome copy (but as it is not openly licensed we've not featured it in this post). The image at the top of this post is a scan of a complete copy of a later 1799 edition belonging to The National Gallery of Art. Higher res scans of details of the first edition have been made available by The Metropolitan Museum of Art, and we've featured a selection of those below.

Sitting atop the central dome is the Imperial Crown and beneath it is an introduction to the print, in German: “This Arch of Honour with its several portals is erected in praise of the most serene, all-powerful prince and sovereign Maximilian, Elected Roman Emperor and Head of Christendom ... in memory of his honourable reign, his gentility, generosity and triumphal conquests.” See a coloured version of the top section here.

Detail of the central portion of the dome, depicting presumably Maximilian himself sat atop a lion.

The root of the family tree — Francia, Sicambria and Troia

The gate of Honour — featuring six hanged mermaids or sirens.

Detail from the top right of the Gate of Honor.

Detail of the mermaids or sirens.

The top of the gate of Praise — featuring cupid, a dragon, and a strung-up ram skin, a reference to the Order of the Golden Fleece.

Detail of the Order of the Golden Fleece insignia.

The middle of the gate of Praise — scenes of Maximilian’s military victories.

The bottom of the gate of Praise – and a feline / monkey creature on a leash.

Detail of the feline / monkey creature, and an enormous snail slinking off round the base of the column.