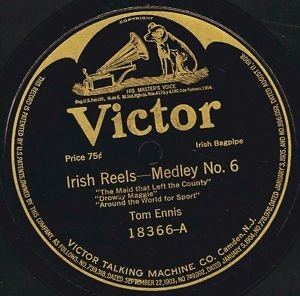 Tom Ennis (with uncredited piano accompaniment) plays a medley of traditional Irish jigs in this recording made on April 7, 1917. The four tunes are "The Three Little Drummers", The Connachtman's Rambles", "The Joy of Life", and "Nancy Hynes".

A medley of three traditional Irish reels - "The Maid That Left The County", "Drowsy Maggie", and "Around the World for Sport"

In a rare rendition of polkas on the pipes Tom Ennis is joined by John Gerrity.

Tom Ennis was the son of John Ennis, also an accomplished piper, who emigrated from Kildare to Nebraska to work on the construction of the railroads. Tom was born in 1888 in Nebraska but after John Ennis was offered a job in the Chicago Police Department, the entire Ennis family relocated. Taught by his father to play the pipes, Tom became the youngest member of Chicago’s Irish Fiddle Club in the early years of the 20th century. Tom moved to New York in his 20s where he made a living as a professional piper and founded one of the first Irish-American recording companies, for whom he commercially recorded in the 1910s and 20s. He also owned a music store during this same time at 59th Street and Columbus Circle in New York City (More info here).