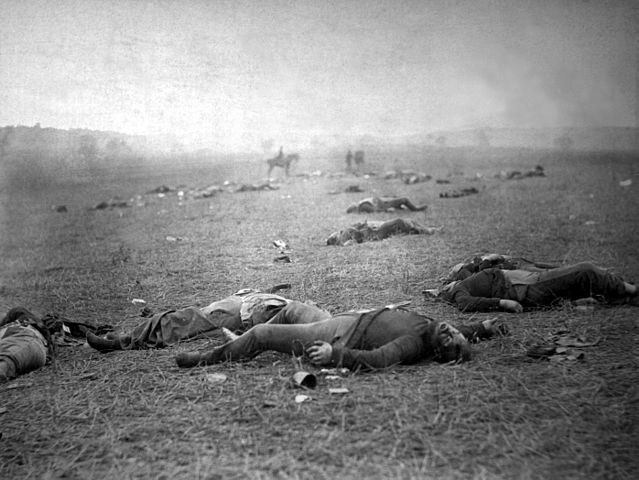 150 years ago today, on November 19th 1863, President Lincoln delivered his famous speech at the dedication of the Gettysburg Civil War Cemetery, a cemetery set up to house and honour the dead from one of the bloodiest battles of the American Civil War which had taken place four months earlier (the sad aftermath of which is pictured above in a photograph by Timothy H. O'Sullivan). Abraham Lincoln's carefully crafted address was in fact meant to be secondary to other presentations that day, following on as it did from a two hour speech by the orator Edward Everett. Although Lincoln's was only just over two minutes long in it's delivery, it came to be regarded as one of the greatest speeches in American history. In it's short span, Lincoln reiterated the principles of human equality espoused by the Declaration of Independence and proclaimed the Civil War as a struggle for the preservation of the Union sundered by the secession crisis, with "a new birth of freedom," that would bring true equality to all of its citizens. Lincoln also managed to redefine the Civil War as a struggle not just for the Union, but also for the principle of human equality.

There are five known copies of the speech in Lincoln's handwriting, each with a slightly different text, and named for the people who first received them: Nicolay, Hay, Everett, Bancroft and Bliss. Two copies apparently were written before delivering the speech; the remaining ones were produced months later for soldier benefit events. The text below is from the Bliss copy written by Lincoln after the event, in 1864, and is the most widely reproduced, including being on the walls of the Lincoln Memorial in Washington.

Four score and seven years ago our fathers brought forth on this continent, a new nation, conceived in Liberty, and dedicated to the proposition that all men are created equal.

Now we are engaged in a great civil war, testing whether that nation, or any nation so conceived and so dedicated, can long endure. We are met on a great battle-field of that war. We have come to dedicate a portion of that field, as a final resting place for those who here gave their lives that that nation might live. It is altogether fitting and proper that we should do this.

But, in a larger sense, we can not dedicate -- we can not consecrate -- we can not hallow -- this ground. The brave men, living and dead, who struggled here, have consecrated it, far above our poor power to add or detract. The world will little note, nor long remember what we say here, but it can never forget what they did here. It is for us the living, rather, to be dedicated here to the unfinished work which they who fought here have thus far so nobly advanced. It is rather for us to be here dedicated to the great task remaining before us -- that from these honored dead we take increased devotion to that cause for which they gave the last full measure of devotion -- that we here highly resolve that these dead shall not have died in vain -- that this nation, under God, shall have a new birth of freedom -- and that government of the people, by the people, for the people, shall not perish from the earth.

This reading is recorded in New York by E. Berliner's Gramophone on September 21st 1898, performed by W.F. Hooley.