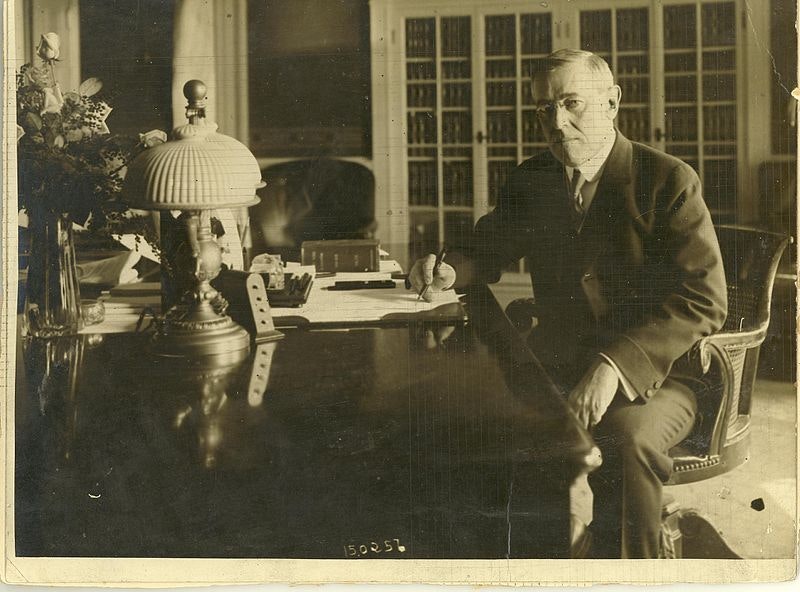 Recorded on September 24th 1912, "Democratic Principles" (track 2 in the player above) was one of a series of six recordings made by Wilson in the run up to the 1912 presidential election — the other recordings were "On the Third Party, "On The Trusts, "To the Farmers" (track 1 above), "On Labor", and "On the Tariff". According to Woodrow Wilson and the Press, the process was not a pleasant one for Wilson. Josephus Daniels — whom, with a little help from Mrs Wilson, persuaded a reluctant Wilson to do it — recalled how Wilson "went at it as though he was going to the stake.... He spoke into the machine and made the records and when he came out he said he felt as though he had been offered up. He acted as if Mrs Wilson and I were his worst enemies and persecutors." (280) Despite his reticence, the recording would go on to be a great success for Wilson, and no doubt helped him in his eventual victory come polling day. Below a transcript of "On Democratic Principles".

We stand in the presence of an awakened nation impatient of partisan make-believe. The nation has awakened to a sense of neglected ideals and neglected duties to a consciousness that the rank and file of her people find life very hard to sustain. That her young men find opportunity embarrassed and that her older men find business difficult to renew and maintain because of circumstances of privilege and private advantage which have interlaced their subtle threads throughout almost every part of the framework of our present law. She has awakened to the knowledge that she has lost certain cherished liberties and wasted priceless resources which she had solemnly undertaken to hold in trust for posterity and for all mankind, and to the conviction that she stands confronted with an occasion for constructive statesmanship such as has not arisen since the great days in which our government was set up. There never was a time when impatience and suspicion were more keenly aroused by private powers selfishly employed, when jealously of everything concealed or touched with any purpose not linked with the general good or inconsistent with it, more sharply or immediately displayed itself. Nor is the country ever more susceptible to unselfish appeals or to the high arguments of sincere justice; these are the unmistakable symptoms of an awakening. There is the more need for wise counsel because the people are so ready to heed counsel, if it be given honestly and in their interests. It is in the broad light of this new day that we stand face to face with great questions of right and of justice, questions of national development, of the development of character and of the standards of action, no less than of a better business system--more free, more equitable, more open to ordinary men, practicable to live under, tolerable to work under--or a better fiscal system whose taxes shall not come out of the pockets of the many because of the pockets of the few, and within whose intricacies special privilege may not so easily find cover. What is there to do? There are two great things to do. One is to set up the rule of justice and of rights in such matters as the tariff, the correction of the trusts and the prevention of monopoly, the adaptation of our banking and currency laws to the very beauties of which our people must put them, the treatment of those who do the daily labor in our factories and mines and throughout all of our great industrial and commercial undertakings as they should be treated in a civilized politic, and the political life of the people of the Philippines for whom we hold governmental power in trust for their service, not our own. The other thing, the additional duty, is the great task of protecting our people and our resources, and of keeping open to the whole people the doors of opportunity to which they must, generation by generation, pass if they are to make conquests of their fortunes in health, in freedom, in peace and in contentment. In the performance of this second great duty, we are face to face with questions of conservation and of development, questions of forests and water powers, and mines and waterways, and the building of an adequate merchant marine, of the opening of every highway and facility, and the setting up of every safeguard needed by a great industrious expanding nation.