Canada Through a Lens the British Library Colonial Copyright Collection

THE BRITISH LIBRARY - Phil Hatfield and Andrew Gray kick off our brand new Curator’s Choice series by taking a look at the fascinating array of photographs in the British Library's Canadian Colonial Copyright Collection. 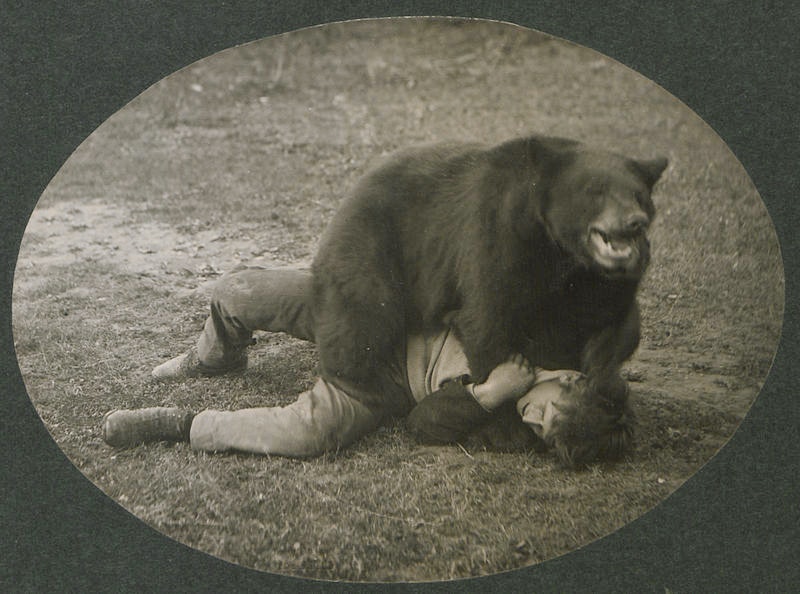 Copyright collections - those aggregations of published material accumulated by libraries as a result of copyright deposit laws - can provide a unique view of the world; especially when they have the opportunity to add photographs to their holdings. With minimal curatorial involvement in their selection and collection, as well as few gate keepers beyond the administration fee required to register copyright, you could say that such caches of material are a rare thing - a photographic world selected by myriad photographers themselves.

This is the format of the British Library’s Colonial Copyright Collection of Canadian photographs, over 4,000 images registered for deposit and collected by the Library between 1895 and 1924. By and large the contents of the collection have been copyrighted as a result of the quality of the shot, the potential to make money from the photograph or, most likely, a mixture of both. These photographs were then accessioned by the British Library and left relatively untouched until a series of works were begun on them in the 1980s.

Why would such a collection end up in London? The answer hangs on an arcane piece of British copyright law, the colonial copyright legislation of the nineteenth century. To be frank the law was a lame-duck: it attempted to extend a part of British law to the Empire and ensure the comprehensive collection of intellectual property from beyond the metropole but in both areas it was fairly ineffective, with only a few territories taking it seriously. 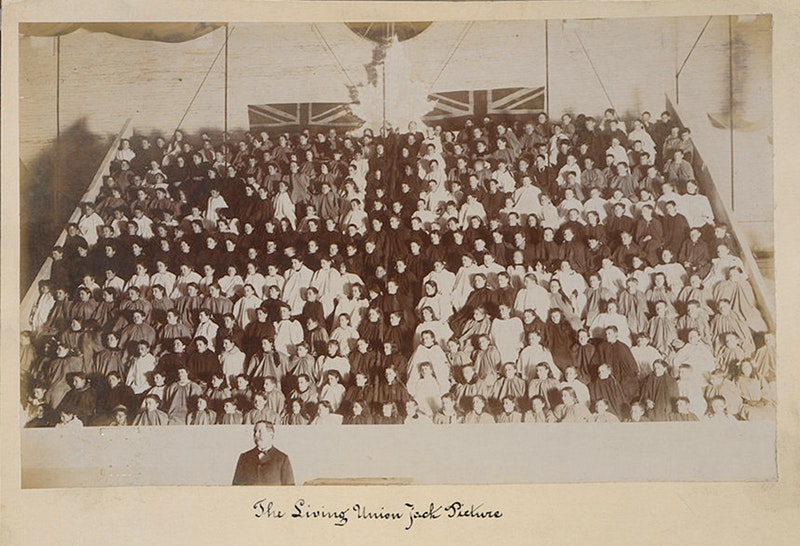 One of the Dominions that did take the law seriously was Canada (even if a little belatedly, the copyright act was passed well before 1895). This resulted in writers, musicians, sculptors, cartographers and photographers being able to copyright their works by registering the intellectual property with the Department of Agriculture in Ottawa. The formalities involved were not too arduous: some paperwork, a payment equivalent to 5d and the submission of two copies of the work in question - one of which was to be shipped across the water to London.

From this hotchpotch of imperial muddling, colonial making-do and individual protectionism developed a collection of photographs that covers the length and breadth of Canada, preserving the work of well known photographers and Canadian photography’s grass roots. Even better, it appears the grass roots of Canadian photography had a great sense of humour, but more on that later.

It is worth noting that the collection covers an important period in Canadian history. Between 1895 and 1924 new provinces join the Confederation, one of Canada’s most influential Prime Ministers is in office, the First World War changes huge numbers of Canadian lives and the country itself becomes increasingly independent and influential on the world stage. All of this is depicted in the collection with national events treated to local interpretations and international conflicts given a uniquely Canadian perspective. 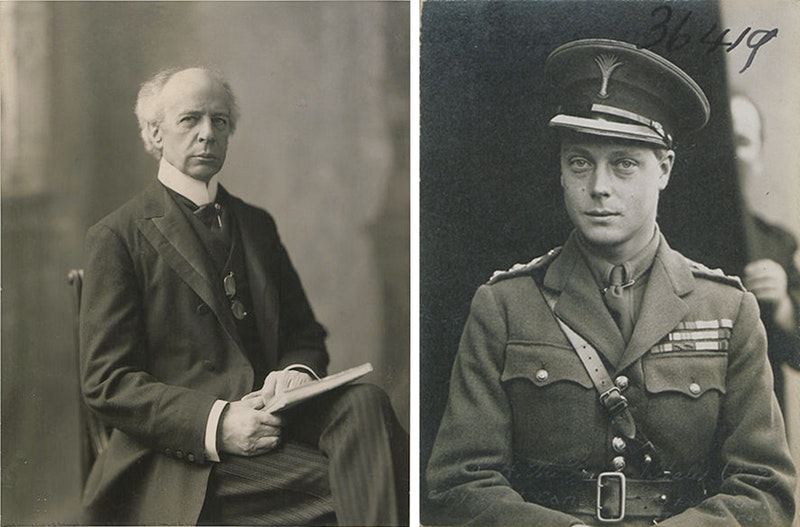 Left: One of the many portraits of Wilfrid Laurier, Canada's first francophone prime minister and often considered one of the country's greatest statesmen. Deposited in 1906 by William J. Topley [copyright number 16871] - Source. Right: The Prince of Wales has another portrait taken, this time with a sneaky photobomb. Deposited in 1919 by the Freeland Studio [copyright number 36419] - Source 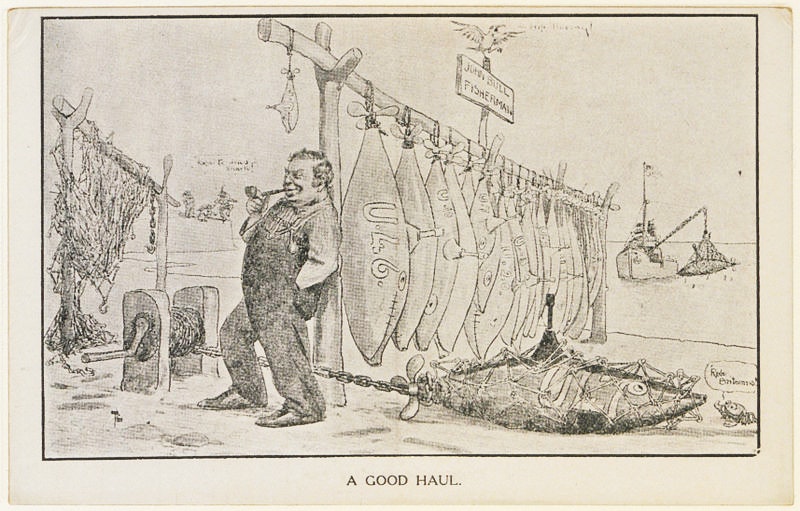 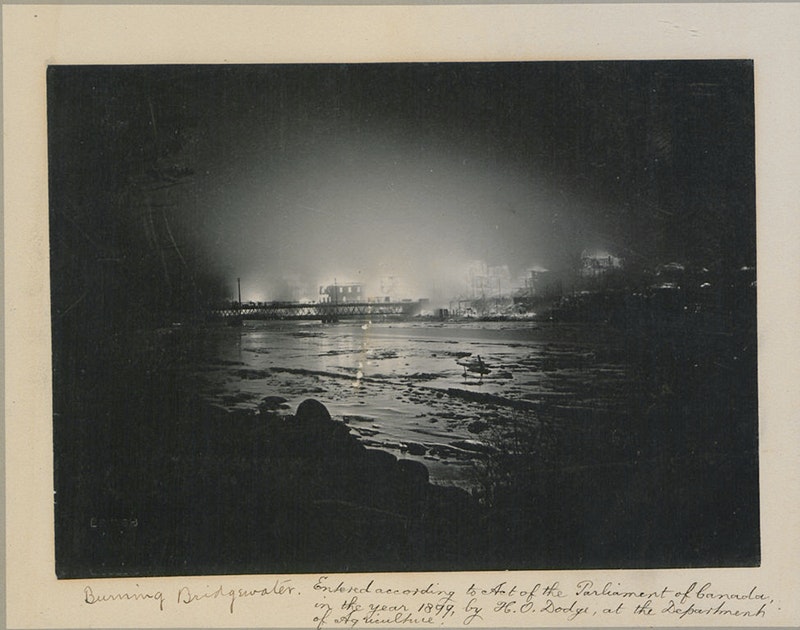 The fire at Bridgewater, Nova Scotia, deposited by H. O. Dodge in 1899 [copyright number 10448]. Fires are a frequent topic in the collection and were a common danger in Canadian cities between 1895 and 1924 - Source 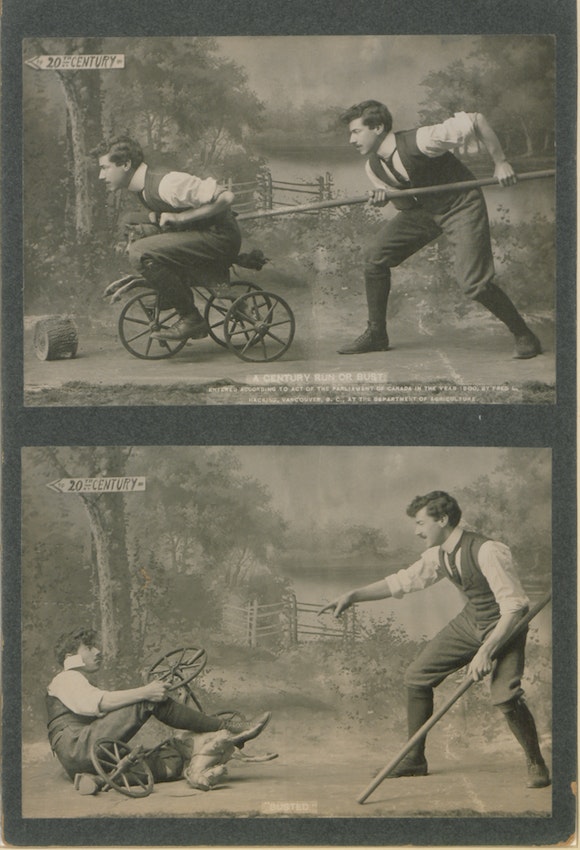 ‘A Century Run or Bust’, deposited by Fred L. Hacking in 1900. One example of the comedic sketches found in the collection - Source

The bulk of the collection, however, is composed of what bound together the Canada its citizens knew; old cities, new towns, transport networks, the peoples inhabiting each province, and so on. Canada’s largest cities are depicted on grand scales or sometimes very intimately while other parts of the country, such as Moose Jaw (Saskatchewan) or Stettler (Alberta), are photographed in the act of laying the foundations of a settlement. Of all the transport subjects available to photographers the railroad seems to have most captured the imagination, fittingly given the train’s popular status as a nation building technology and the role of the camera in laying the foundations for Canada’s railways. However, the train is not the only method of transport fascinating and facilitating photographers in the collection; ships navigate seas and rivers, cars and motorcycles are shown making their first marks on the country, while airplanes are used to achieve new views of the landscape. 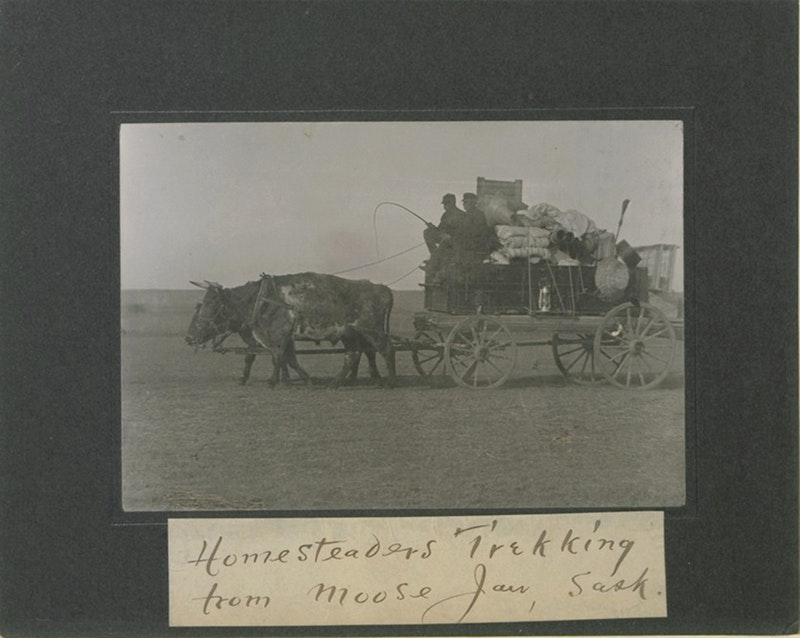 The wreck of an artillery train at Enterprise, Ontario, deposited by Harriett Amelia May in 1903 [copyright number 14100] - Source 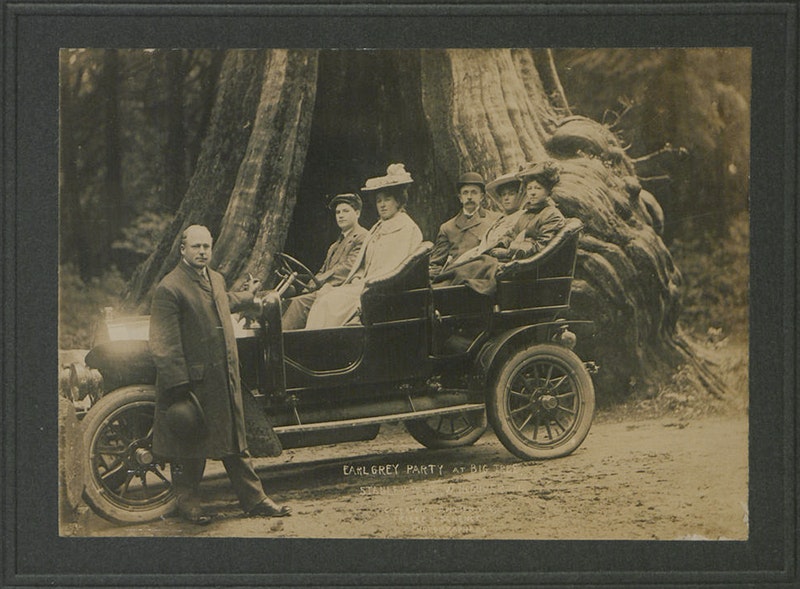 The Early Grey party at ‘Big Tree’ in Stanley Park, deposited in 1906 by Fricke and Schenck [copyright number 17684]. Cars are only occasionally seen in the collection, British colonial figures are more common - Source

The things that seem to grab these photographers’ attention the most, though, are people, their cultures, movements, habits and achievements. Sport forms a great part of the collection, with everything from lacrosse to football to skiing covered and a few Stanley Cup winning teams thrown in for good measure. Canada’s indigenous peoples and the cultures of newly arrived migrants also caught the eye of many an anthropologically minded photographer, providing a sense of how dramatically populations across Canada were changing as ‘The Last Best West’ filled in. 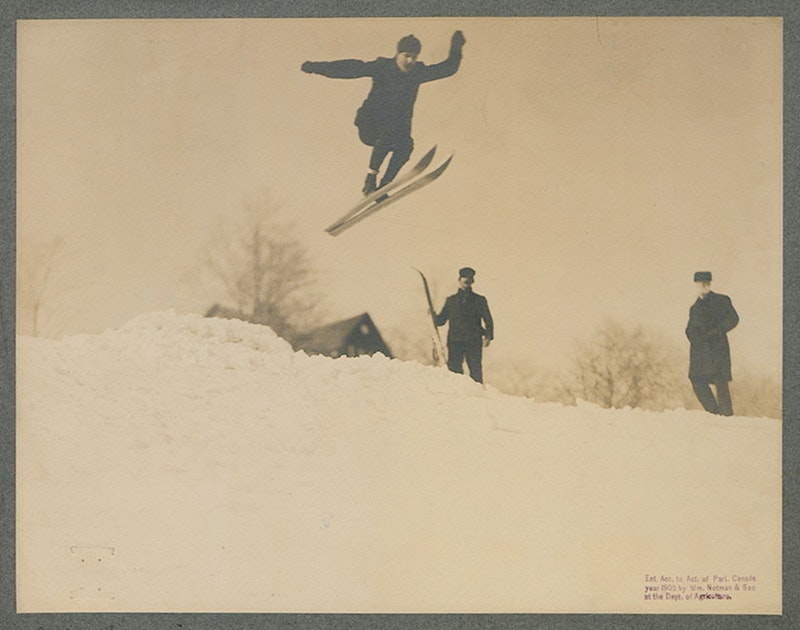 This ski jump is one of the many winter sports photographs in the collection. Deposited in 1905 by William Notman and Son [copyright number 16097] - Source

Ottawa’s 1911 championship winning team with a much smaller version of the Stanley Cup. Deposited in 1911 by Alfred George Pittaway [copyright number 23753] - Source 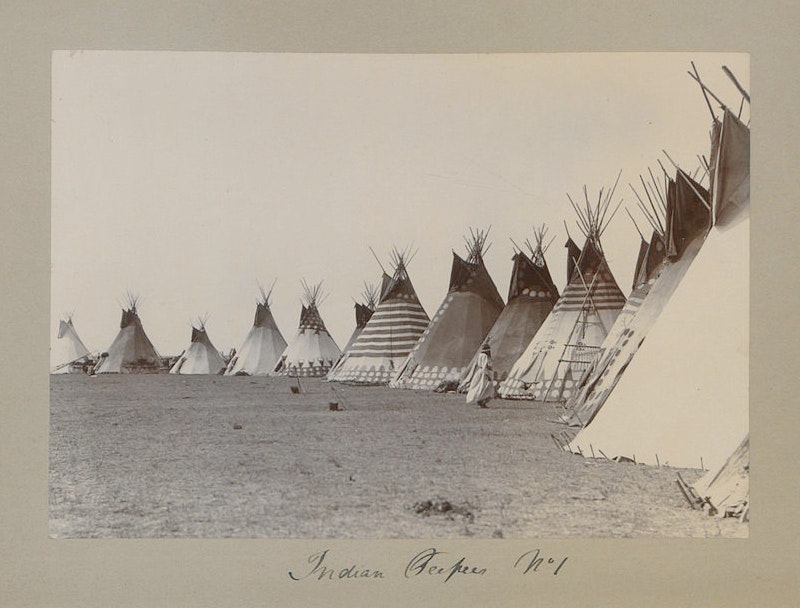 One of Arthur Rafton Canning’s many photographs of First Nations groups near Lethbridge, Alberta. Deposited in 1910 [copyright number 23387] - Source 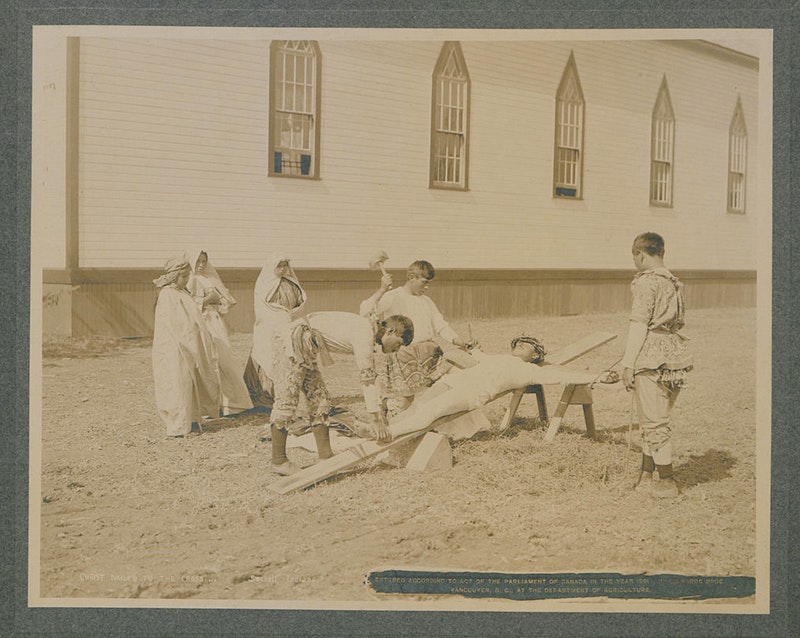 Sechelt Indians enact Christ’s nailing to the cross, deposited in 1901 by the Edwards Brothers [copyright number 12287]. A number of photographs in the collection reflect attitudes that have changed during the twentieth century - Source

There are also sideways glances at the development of metropolitan Canada and its increasingly affluent middle classes, with subjects from plumbing to lecherous husbands captured through the lens. The middle classes were often the target audiences of these photographs, meaning what we see through the lens are various interpretations of what this social group wanted to see. 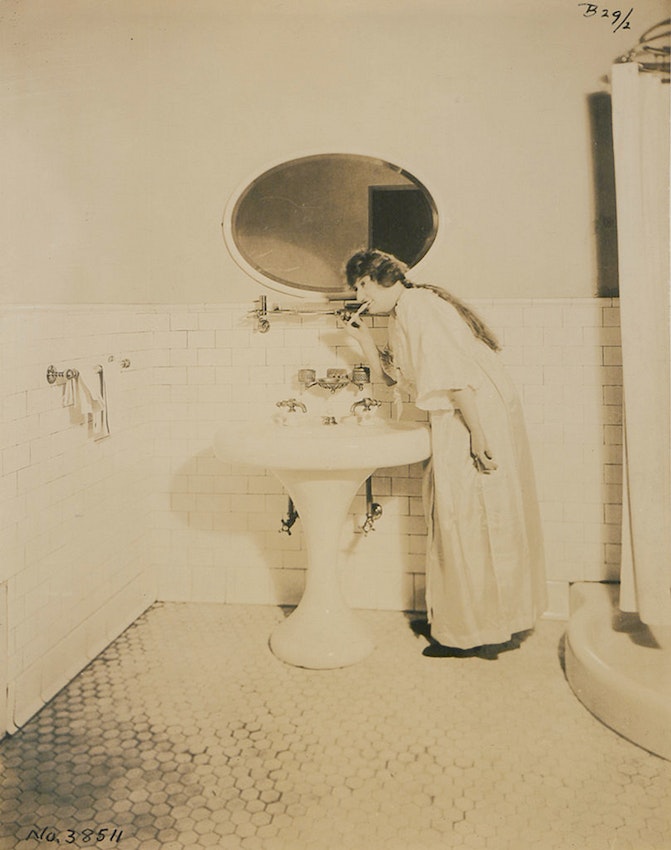 One photograph from a large selection produced to promote modern plumbing (note the model’s expression). Deposited in 1921 by William Stairs, Son and Morrow [copyright number 38511] - Source

‘The Stork’s Visit’ from a series titled, ‘Courtship and Wedding’, deposited in 1906 by Arthur Lawrence Merrill [copyright number 17208] - Source

Part of a series of stereoscopic photographs telling the story of Mr. Turtledove’s fancy for the French cook. Deposited in 1906 by Arthur Lawrence Merrill [copyright number 17212] - Source

With this being the golden age of the postcard too it is easy to imagine the collection's photographs of famous explorers, early tourist sites, beauty spots and local celebrities circulating around the country or, indeed, the Empire, with addresses and messages on the back. Even more potentially ephemeral are the great number of photographs of cats in the collection. It would appear early twentieth century Canada was little different from the Internet in its visual taste and that a photograph of a cute kitten or humorous cat would get you along way. 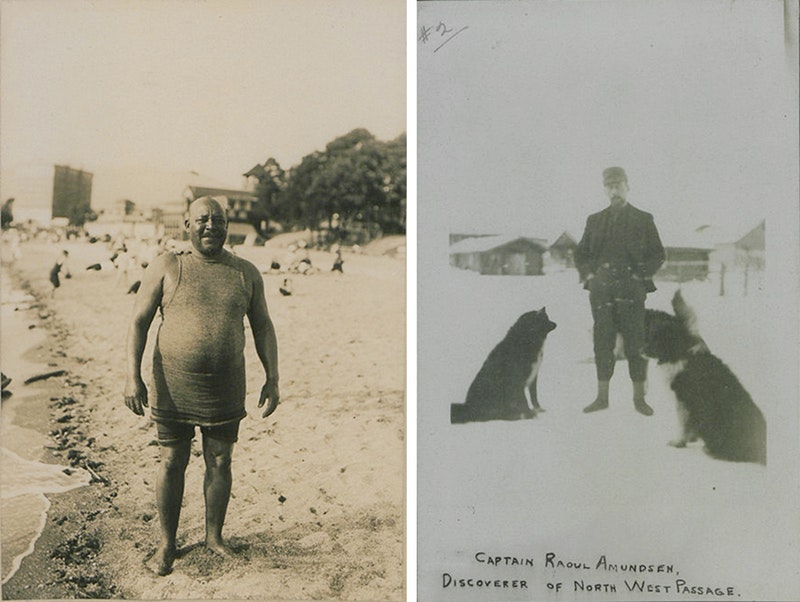 Left: Joe Fortes, a Vancouver resident who devoted all of his time to teaching children how to swim. This photograph was used as part of the Canada Post stamp issued in 2013 to mark the 150th anniversary of Joe’s birth. Deposited in 1923 by Pride of the West Knitting Mills [copyright number 41838] - Source. Right: Roald Amundsen, photographed after his navigation of the Northwest Passage. Deposited in 1906 by John Francis Sugrue [copyright number 17023] - Source

The collection contains a lot of photographs of cats, with varying degrees of cuteness / scariness. Deposited in 1896 by I. M. Bogart [copyright number 8754] - Source

Given the broad content of the collection it is pleasing to write that these photographs have been digitized and made available under a Public Domain license; so the Internet now has a few extra photographs of cats to go around. Canadian photographs copyrighted before 1949 are now out of copyright meaning this was an opportunity for the British Library and Wikimedia UK to collaborate and digitize this unique collection of Canadian historical photographs. The results of this collaboration have been released in high quality, with TIFF and JPEG files that can be viewed and downloaded via Wikimedia Commons or the British Library’s ‘Digitised Manuscripts’ tool.

To our minds this is a great resource for historians of Canada and photography, those with an interest in the places and people depicted, and many writers and bloggers looking to furnish their most recent article or post. In fact, the range of potential uses has already exceeded our initial ambitions. For example, one of the cat photographs featured on a conference poster in Tokyo, showing the wide geographical reach and multiple new lives of digitized collection items.

Please go on and put the collection to good use and if you do anything particularly innovative the authors would love to know.

Part of a photographic series on performing animals, deposited by John A. Brown in 1920 - Source

Dr. Phil Hatfield is Curator for Canadian and Caribbean Studies at the British Library, you can find more of his work on the British Library Americas Blog. Previously he was an ESRC funded Collaborative Doctoral Award student working with this very collection, making it something of a labour of love over the past six years. A review of the thesis can be found here.

Andrew Gray was the Wikipedian in Residence at the British Library from 2012-13, and has worked with Wikimedia projects since 2004. He currently works as a librarian in Cambridge.