For more than 150 years the city of New Orleans has been known for the theatricality and extravagance of its Mardi Gras celebrations. Allison C. Meier looks at the wonderfully ornate float and costume designs from Carnival's "Golden Age" and the group of New Orleans artists who created them. 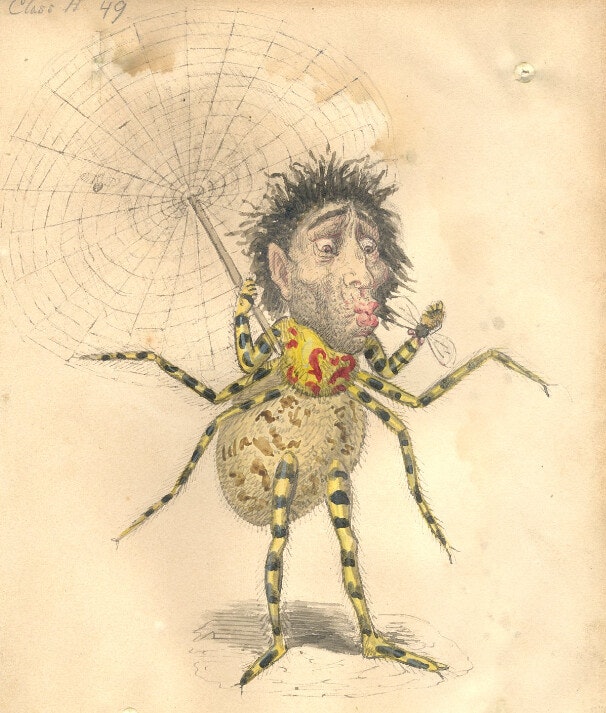 On March 6, 1889, the New York Times breathlessly reported on the recent Carnival spectacles in New Orleans. The Krewe of Rex's pageant, themed around "Treasures of the Earth", included a "Crystal" float "attended by figures in gorgeous costumes and prisms by the thousand", and a "Diamond" float featuring "a rocky diamond dell” through which flowed “limpid streams where nymphs sported and played with the gems”. The Krewe of Proteus, meanwhile, dazzled with their “Hindoo Heavens” pageant, where in one scene appeared Agni “God of Fire" riding a ram that "strides the flames, attended by the fire sprites.” This opulent, and highly exoticized, interpretation of South Asian religion concluded with a tableau where "Vishnu, under the guise of a horse with silver wings, shatters the earth with his hoof and rises to the celestial abode.”

The modern American Mardi Gras owes much of its bombastic revelry to this late nineteenth-century “Golden Age” of Carnival design. From the invitations to the costumes to the hand fans carried by spectators, artists designed entire identities for each Krewe (a group that organizes a Carnival event). Carnival and its culminating day of festivities — Mardi Gras — was brought to the Louisiana area by the French in the late seventeenth century. Mardi Gras as it’s celebrated today is often linked to the Mistick Krewe of Comus, an Anglo-American group which in 1857 organized a debut parade themed "The Demon Actors in Milton's Paradise Lost”. It was a departure from previous Carnivals that were more informal and tied to the Roman Catholic community. Following the Civil War, new Krewes emerged, each attempting to outdo the others with increasingly elaborate wood and papier-mâché floats pulled by teams of horses. One year it might be Medieval legends coming to life on the streets, the next flying monkeys of Chinese mythology terrorizing the crowds. 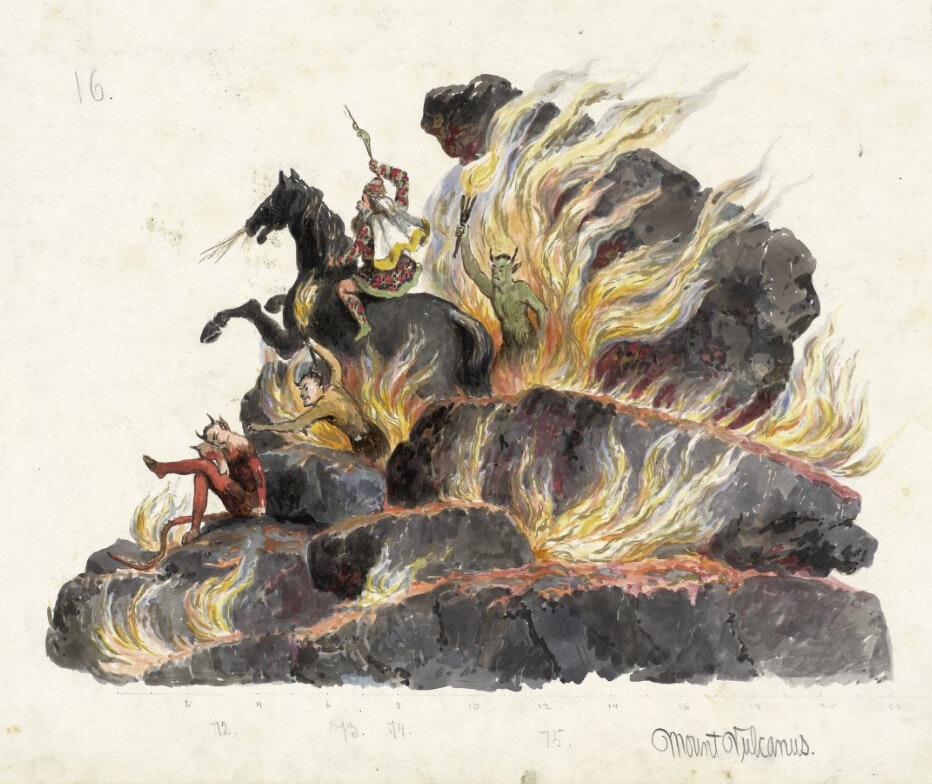 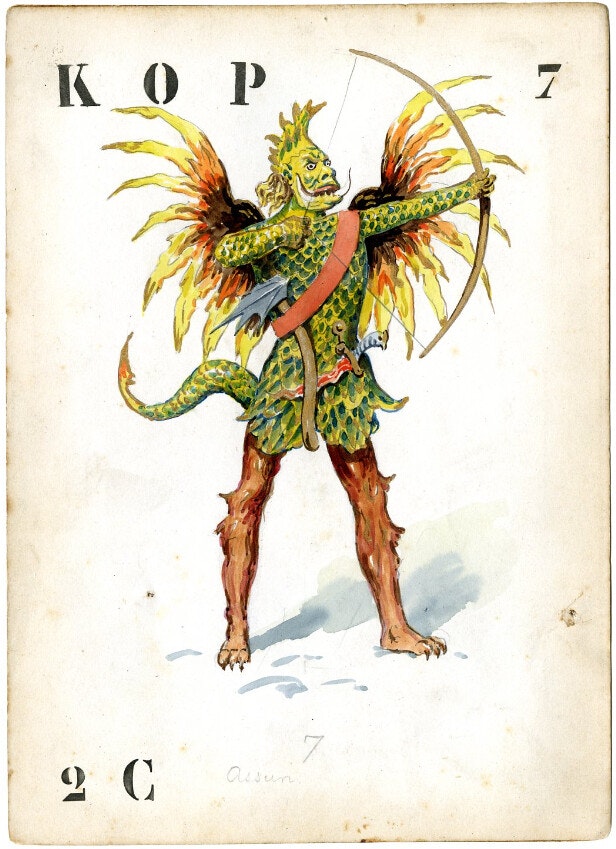 "The city developed a Carnival aesthetic that blended popular Carnival tradition with the artistic currents of the late nineteenth century”, writes Reid Mitchell in the 1995 book All on a Mardi Gras Day: Episodes in the History of New Orleans Carnival. "The latter contributed largely to Carnival's Orientalism. Carnival with its costumes, processions, tableaux, and bals masque played to the late nineteenth-century love of fantasy, of exoticism.”

Mythology, literature, religion, and history, as well as nineteenth-century book illustration and turn-of-the-century Art Nouveau, were remixed into an eclectic excess. Up to the early 1900s, the main Krewes were Rex, Comus, Proteus, and Momus, each with their favorite artist collaborators. The names of these individuals are now obscure, but artists Jennie Wilde, Bror Anders Wikstrom, Charles Briton, Carlotta Bonnecaze, and others now anonymous all influenced the embrace of the fantastic that endures into the present. The greatest publicly accessible resource of their art is the Carnival Collection, part of the Louisiana Research Collection (LaRC) at Tulane University and supported by a bequest from the late journalist Charles L. "Pie" Dufour. In 2012, Tulane marked the completion of a two-year digitization project that put over 5,500 float and costume designs in the Carnival Collection online. 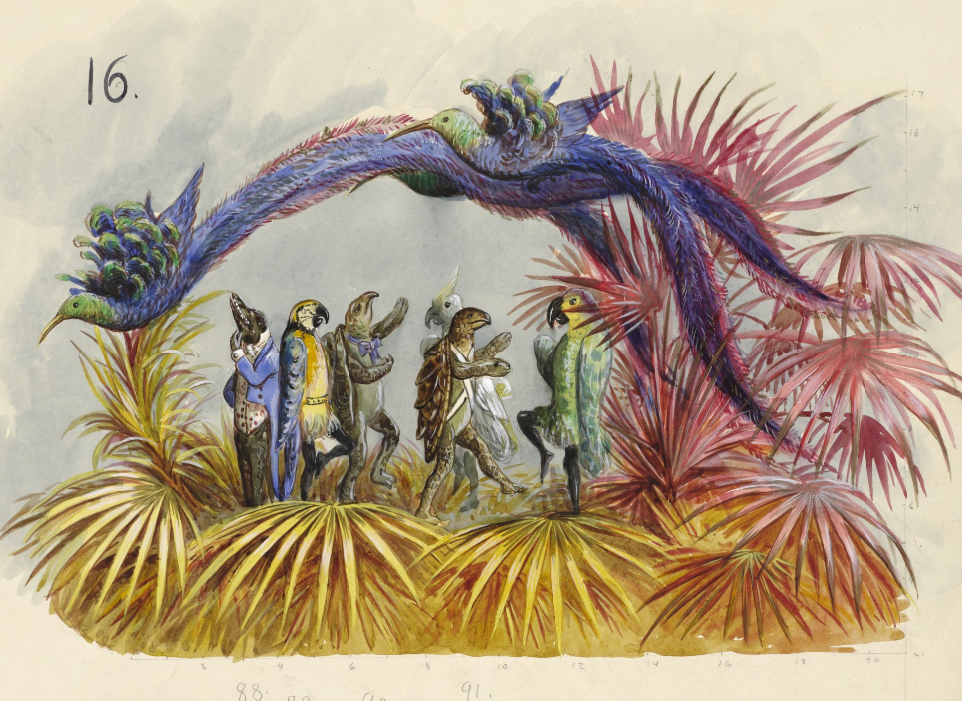 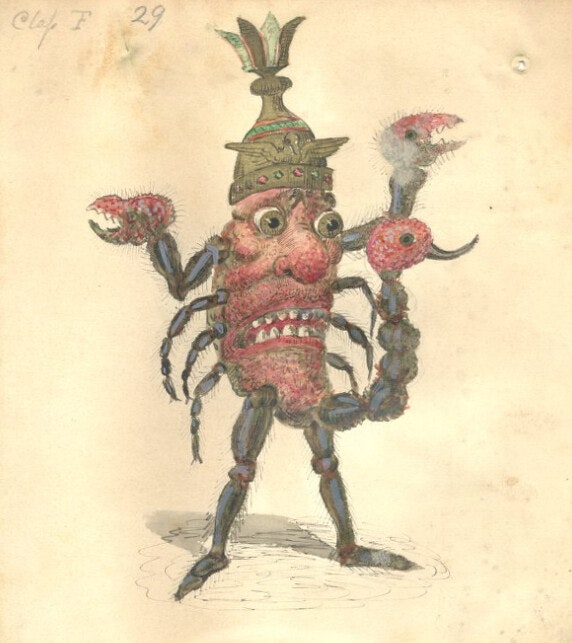 These watercolor-and-ink drawings were intended to be ephemeral — some have visible pin holes from being tacked on the wall by costume makers in Paris — and thus not all were saved. Due to their delicate nature, they’re also rarely on view. Through April 1, the New Orleans Museum of Art is exhibiting selections from the Carnival Collection in Bror Anders Wikstrom: Bringing Fantasy to Carnival. Although his name is carved right on the frieze of the museum’s façade, included in a litany of American art luminaries like Whistler, Audubon, and Copley, it’s likely few visitors are familiar with the Swedish immigrant. Bringing Fantasy to Carnival features a full set of the twenty floats he designed for the Krewe of Proteus’ 1904 “The Alphabet” parade, with "D for Dragon" carrying knights fighting a red, purple, and green beast, and "U for Unicorn" featuring three one-horned white horses riding before a rainbow. 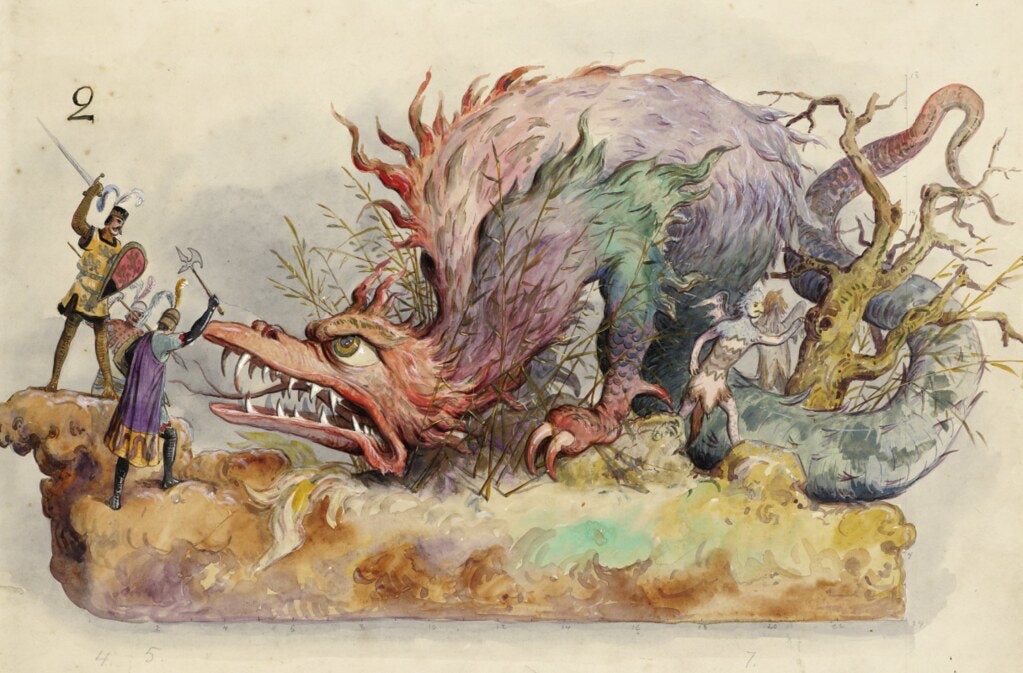 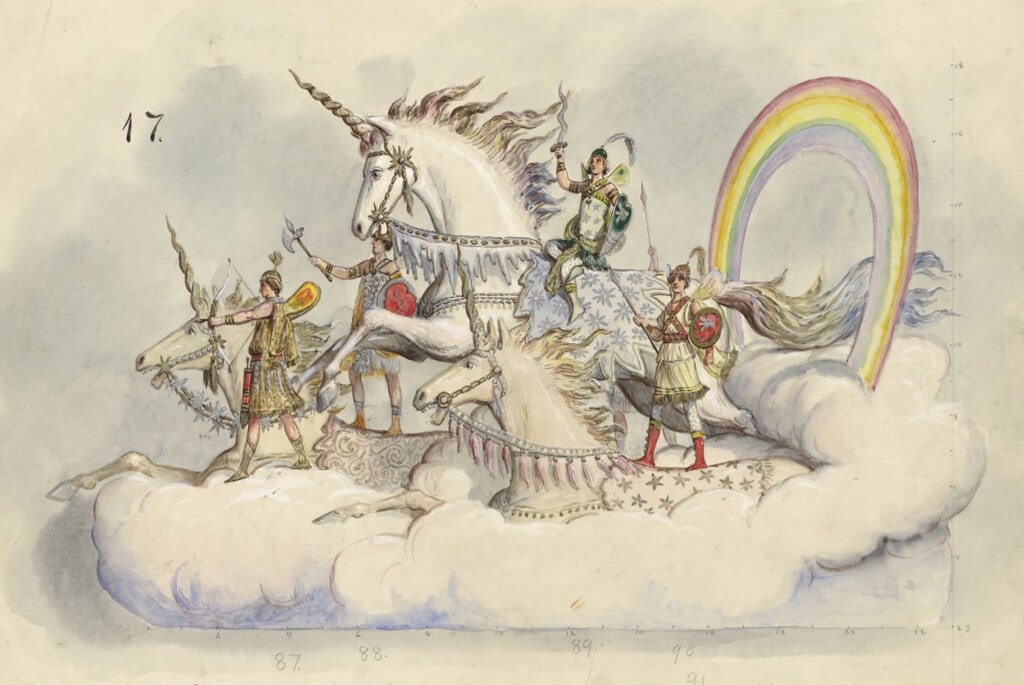 Wikstrom came to New Orleans in 1883. A painter of maritime scenes, inspired by his time as a sailor, he was an active member of the local arts community, helping to found the New Orleans Artists Association that was influential in the opening of the New Orleans Art Museum in 1910. His extremely imaginative illustrations are transporting in their detail, whether the battling tiger-lillies with actual tigers leaping from blossoms and anthropomorphized cacti fending them off, from the 1898 "A Trip to Wonderland”, or the full Egyptian-style temple for the crowning of the pharaoh scene in the 1903 "Cleopatra" parade. 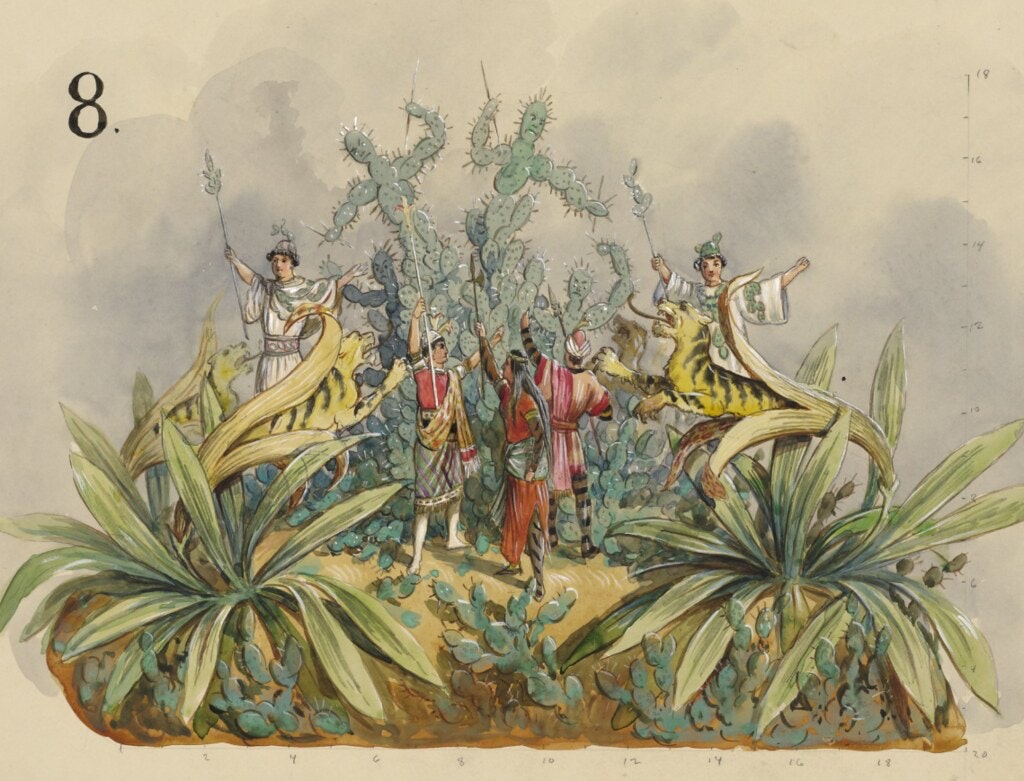 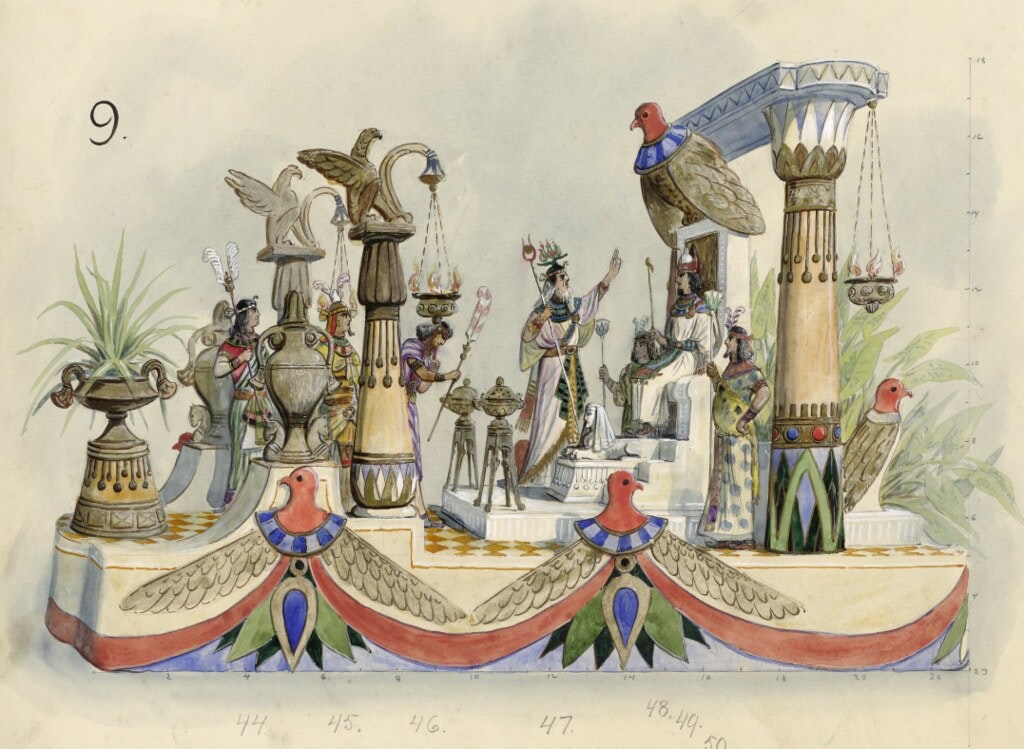 Of course, artists could sketch any dream they wanted, building it was another thing. Comparing the illustrations to historic photographs online at the Louisiana Digital Library, it’s evident there were some concessions to making a float the horses could actually navigate through the crowds. Yet the early parades transformed into otherworldly reveries at night, when flambeaux carriers, a dangerous role traditionally given to black men, illuminated the darkness with fire. Then the warm, quavering light of the flames gave the fabricated demons, dragons, fairies, and gods a convincing glow.

Wikstrom started as an assistant to a fellow Swedish immigrant, Charles Briton. Briton arrived in New Orleans in 1865, and worked for a time with lithographer Emile Boehler, eventually devoting his artistic talents to Carnival. While he designed floats, invitations, and all the other Krewe materials, his costumes are the most ingenious. His 1882 “Ancient Egyptian Theology” illustrations for the Krewe of Proteus morphed participants into a hieroglyphic-adorned Horus and Anubis, and the 1873 "Missing Links" for Comus metamorphosed humans into beetles, coral polyps, ears of corn, grasshoppers, and leeches. 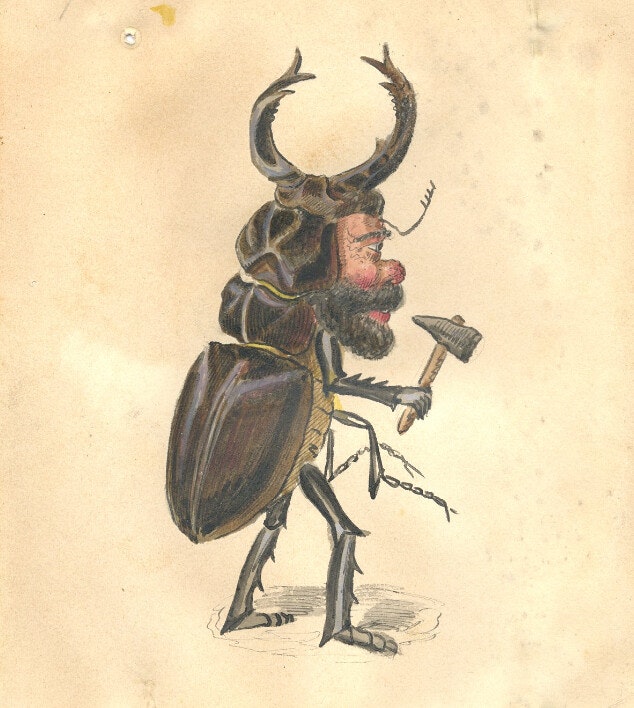 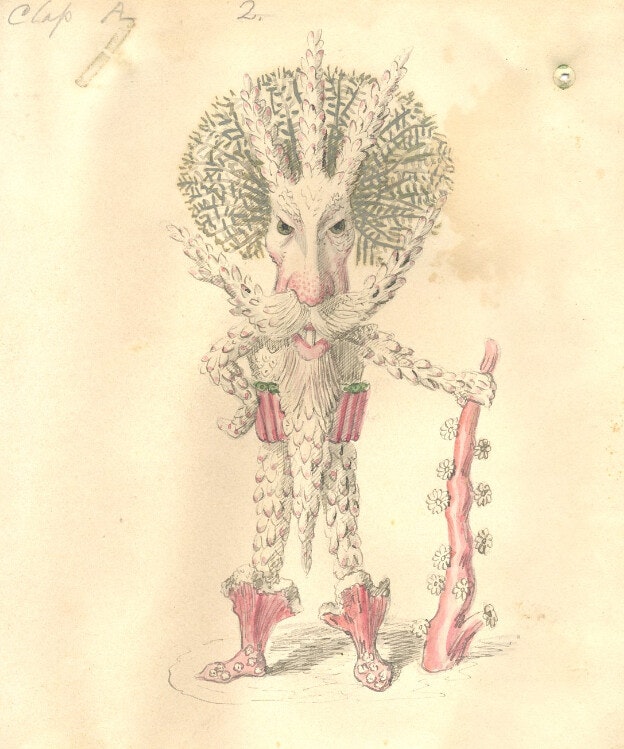 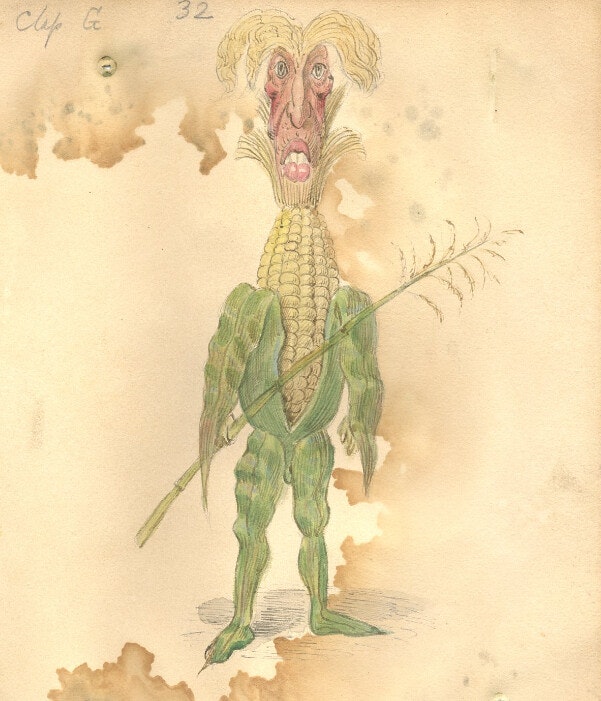 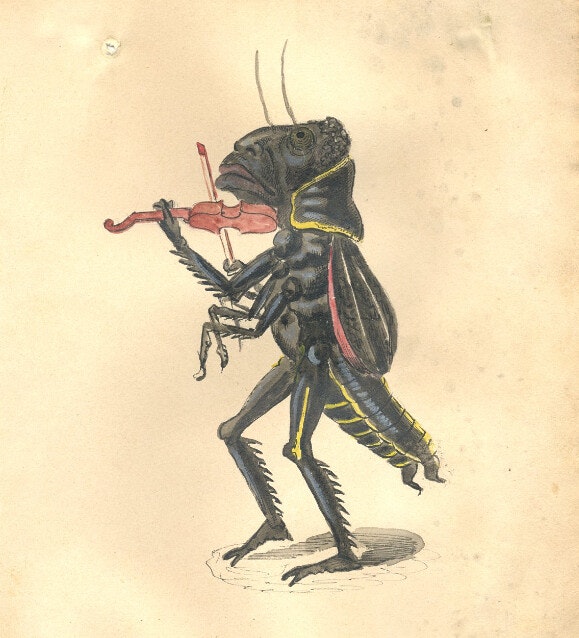 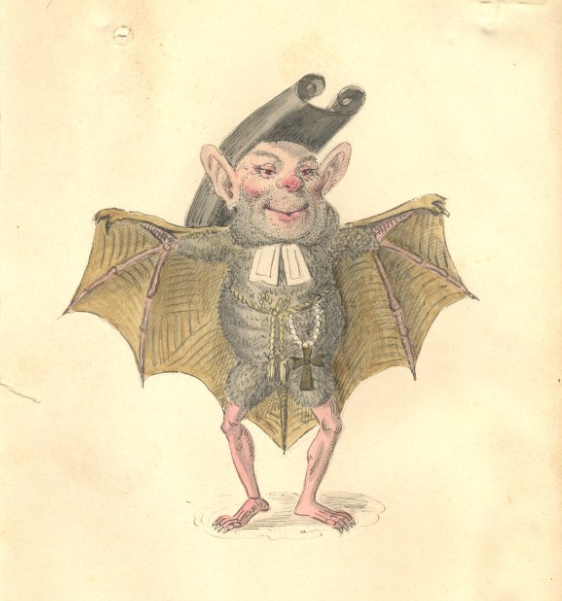 The full title of this 1873 parade was “Missing Links to Darwin’s Origin of Species”, and its satire bristled against the post-Civil War changes in the South. Michael Taylor describes its identifiable characters on the Louisiana State University Special Collections site: "Ulysses S. Grant, for example, has been crossed with a caterpillar and lounges on a leaf smoking a cigar. General Benjamin Butler, the despised commander of the Union army in New Orleans during the Civil War, is shown in another cartoon dining with a party of bears and hyenas." The parade's political barbs did not go undetected, and it was ultimately blocked by police from crossing Canal Street. Among the costume drawings that survive in the Carnival Collection is Darwin himself as an ass, and one of a gorilla playing a banjo, a racist caricature that ridiculed the humanity of black people at a time when Reconstruction amendments were constitutionally affirming their rights. Within the Carnival whimsy was the use of its sumptuousness to elevate white Southerners as “kings” and “queens”, with finery and balls that excluded non-white participants. 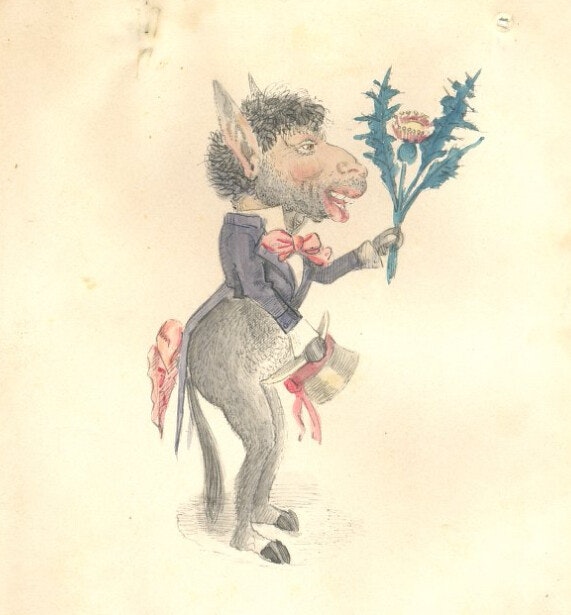 Significantly, in an era of male-dominated arts, several women were leaders in Carnival designs. Born in Georgia, the prolific Jennie Wilde brought a lavish Art Nouveau elegancy to her illustrations for Comus and Momus. For the 1902 Lord Byron–themed floats for Momus, she envisioned his metaphysical poem "Manfred" with a mermaid, waifish spirits, and the lurking specter of death in the form of a skull; "The Prisoner of Chillon" has a lonely, bearded man chained in a Gothic dungeon, swarmed with bats, with one giant winged mammal acting as the eerie float's prow. 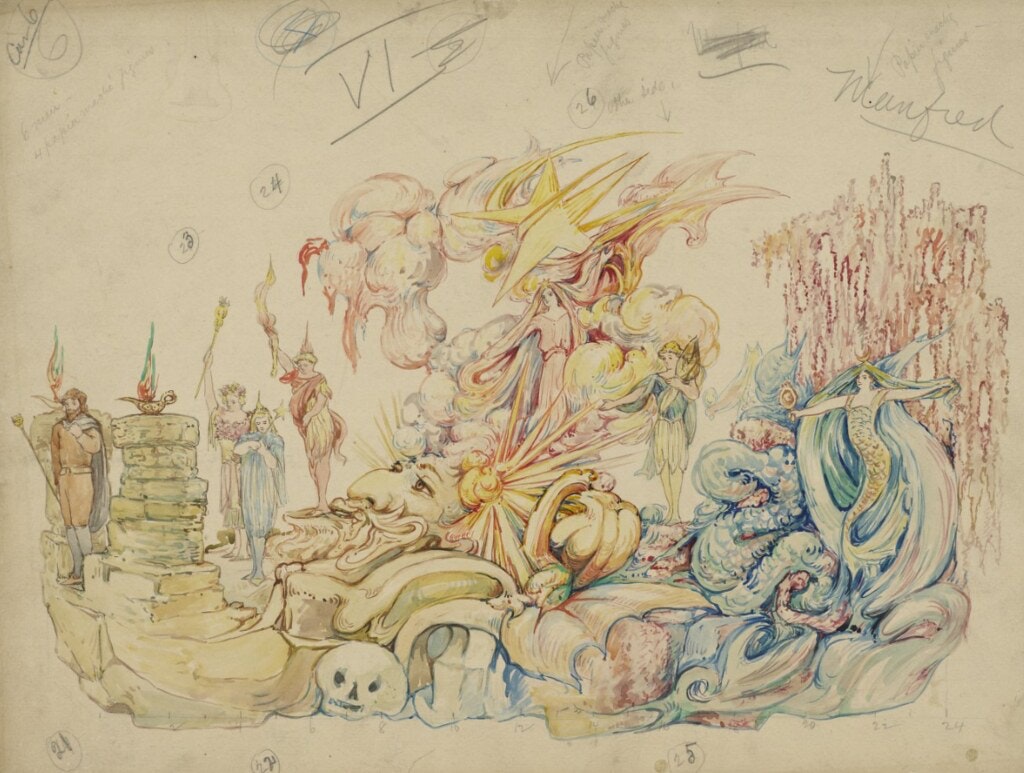 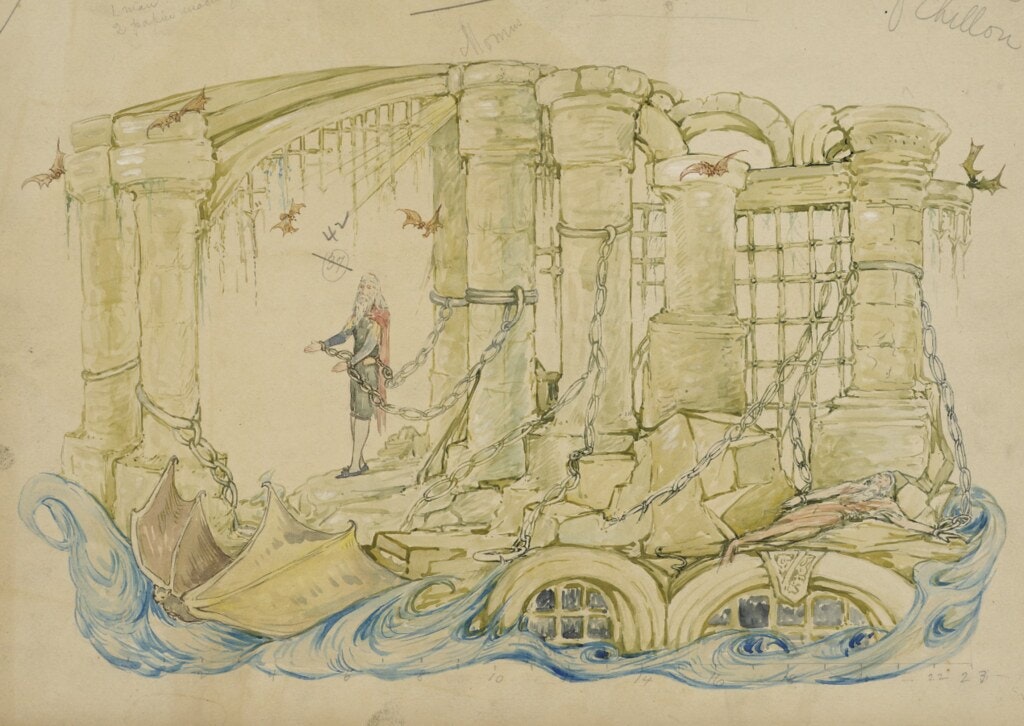 For Comus' 1911 "Familiar Quotations" she positioned couples on the "What are the wild waves saying” float gazing at a torrent of water from pearlescent shells; and butterflies, gargantuan poppies, a sea serpent, and botanical forms swept in a current of foliage on “Such stuff as dreams are made of”. 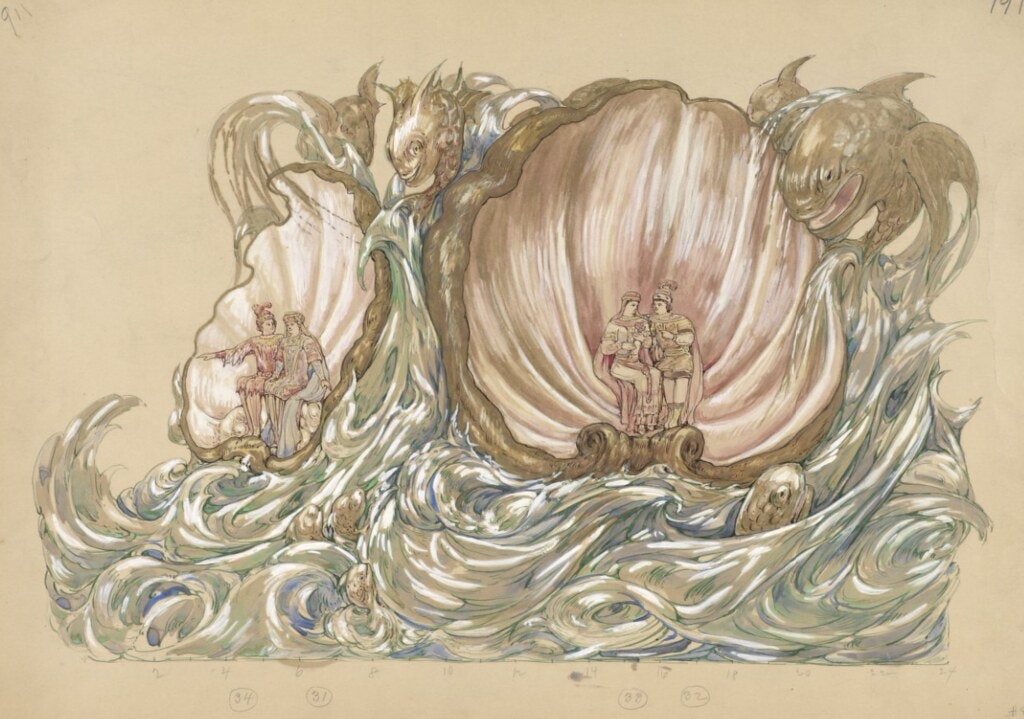 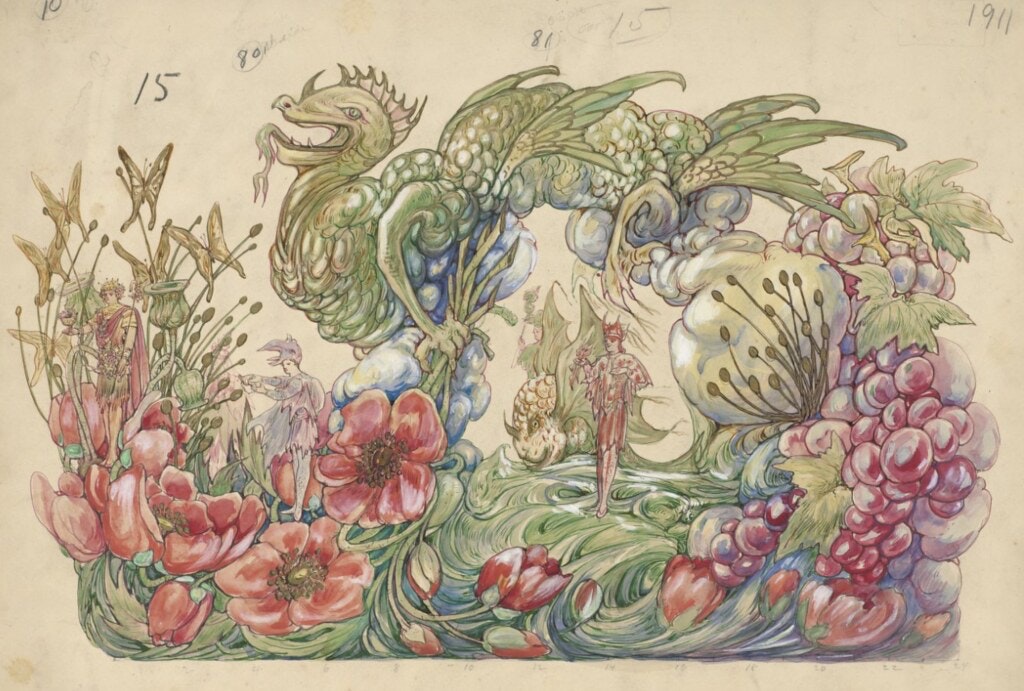 "Such Stuff as Dreams are Made of” float design by Jennie Wilde for the "Familiar Quotations" theme, Mistick Krewe of Comus, 1911: Carnival Collection, Louisiana Research Collection, Tulane University — Source (some potential restrictions on reuse).

In his 2001 book Mardi Gras Treasures: Costume Designs of the Golden Age Notecards, Henri Schindler writes that Wilde was

fascinated throughout her career with the painting and literature of the symbolists and the decadents, with the chimeras and operatic grandeur of Gustave Moreau and Gustave Flaubert, the sensually tinted worlds of Pierre Loti, and the Babylonian apocalypses of Jean Rochegrosse. Nurtured in this other-worldly splendor, Wilde in turn called forth visions of exotic temples and molten clouds, bowers of gigantic flora, and enchanted beasts.

In 1913, Wilde died at the age of 48 while on a trip to England. Her final designs for “Tales From Chaucer” appeared in 1914, debuting the very night she was interred in New Orleans’ Metairie Cemetery. In addition to Wilde, there were several other women who had a major role in Carnival art. Carlotta Bonnecaze created dazzling scenes with an air of science fiction, such as the 1886 parade “Visions of Other Worlds” for Krewe of Proteus, with lightning-wielding extraterrestrials riding on a comet, six-armed beings wandering a Saturn covered with prickly cacti, and a desolate moon where wizened figures seem frozen in gray craters. 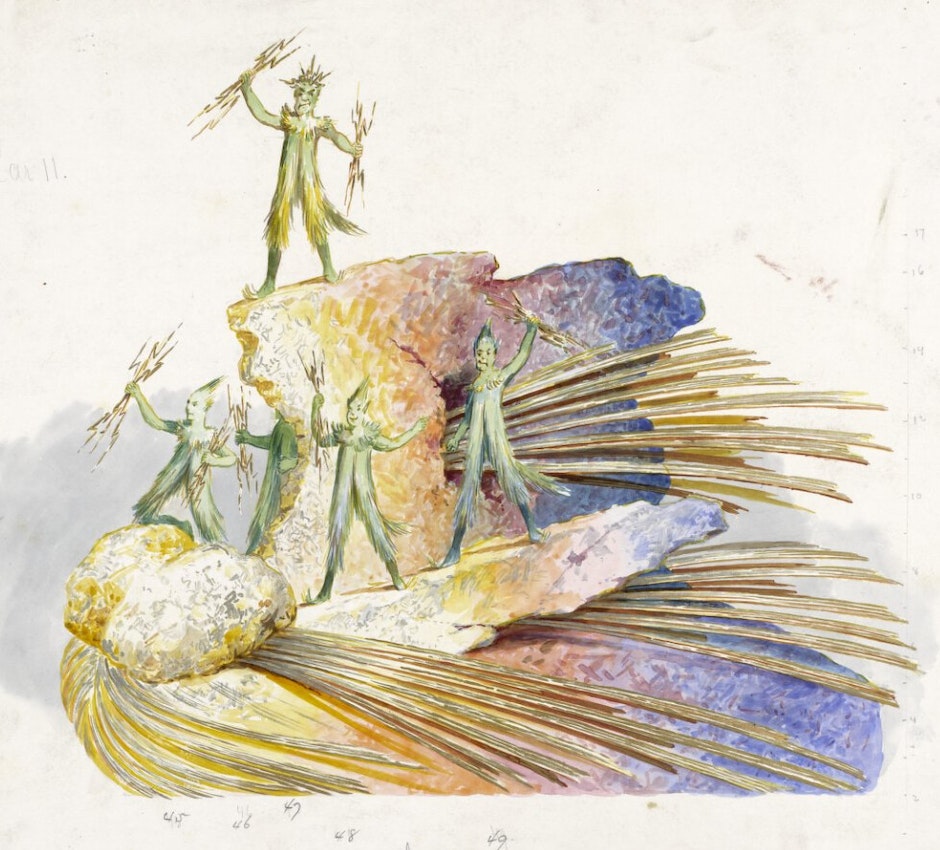 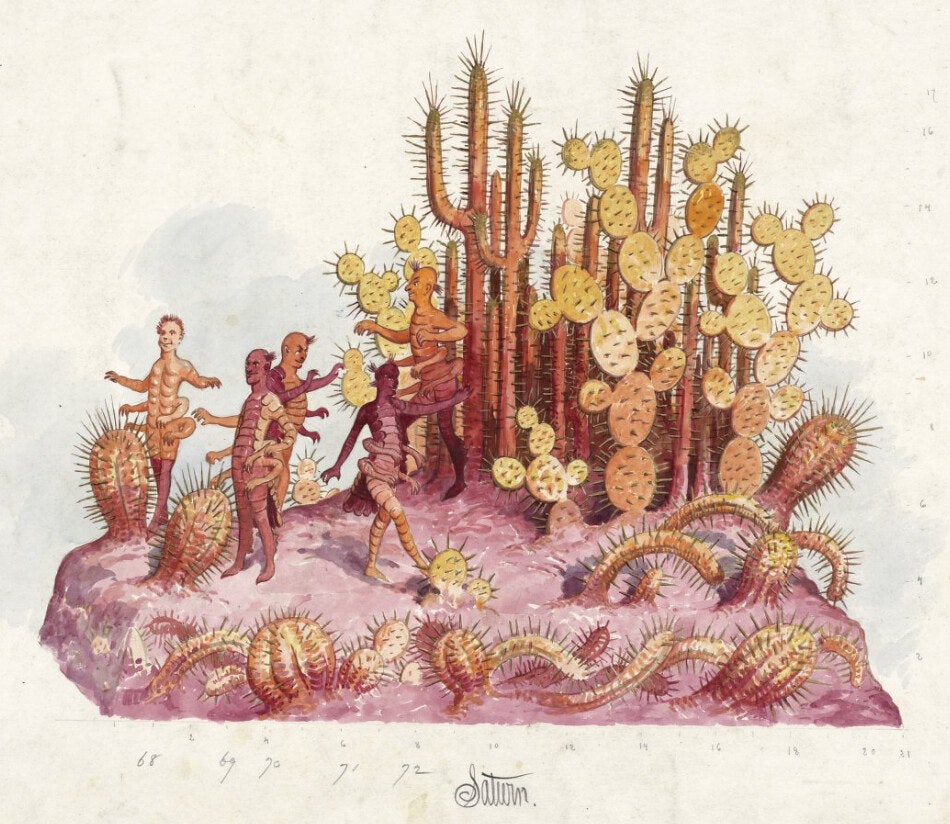 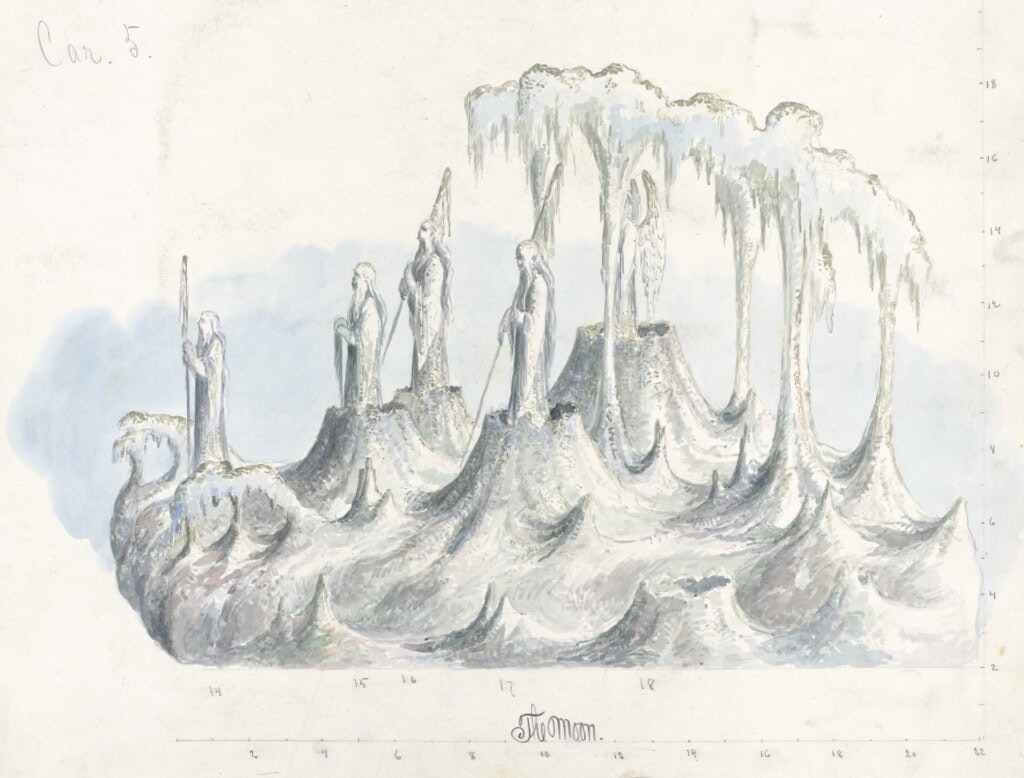 "The Moon” float design by Carlotta Bonnecaze for the "Visions of Other Worlds" theme, Krewe of Proteus, 1886: Carnival Collection, Louisiana Research Collection, Tulane University — Source (some potential restrictions on reuse).

Later, Ceneilla Bower Alexander decked out the Krewe of Rex with an Aurora Borealis float in 1912 and ethereal angel costumes in 1920, and in the 1920s and ’30s, Léda Hincks Plauché sketched feathered serpents and Don Quixote scenes for the Krewe of Proteus. 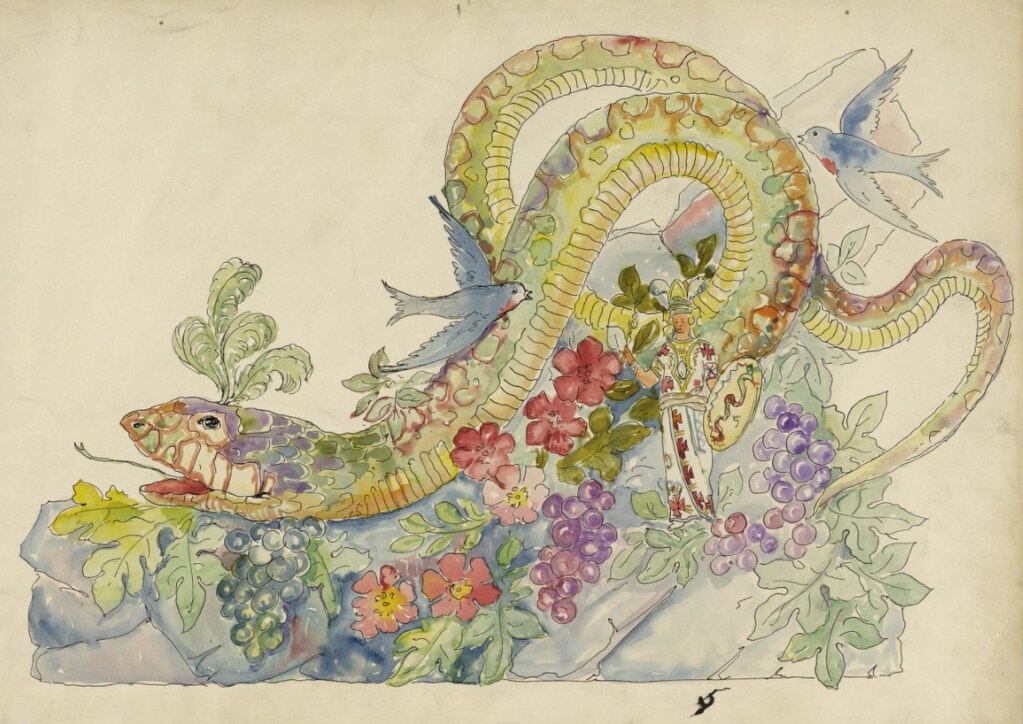 The Great Depression effectively ended this period of no-expense-spared Mardi Gras, yet its spirit of visual exuberance thrives into the twenty-first century. The papier-mâché, wood, paint, and maybe a few fake jewels, used to turn an ordinary person into a trickster devil or graceful half-human, half-butterfly, and a horse-drawn cart into a wonderland, endure in the spirit of Carnival creation. As the annual bacchanalia of parades, processions, and parties continues in New Orleans, there are still threads to follow back to these artists who shaped fantasies into reality.

Allison C. Meier is a Brooklyn-based writer who has contributed stories to Lapham's Quarterly, National Geographic, the New York Times, CityLab, Wellcome Collection, and other publications on art, architecture, and history. Previously, she was a staff writer at Hyperallergic and senior editor at Atlas Obscura. She moonlights as a cemetery tour guide.