Patricia Fara traces the changing iconography of Joseph Banks, the English botanist who travelled on Captain Cook's first great voyage and went on to become President of the Royal Society and important patron for a whole host of significant developments in the natural sciences. 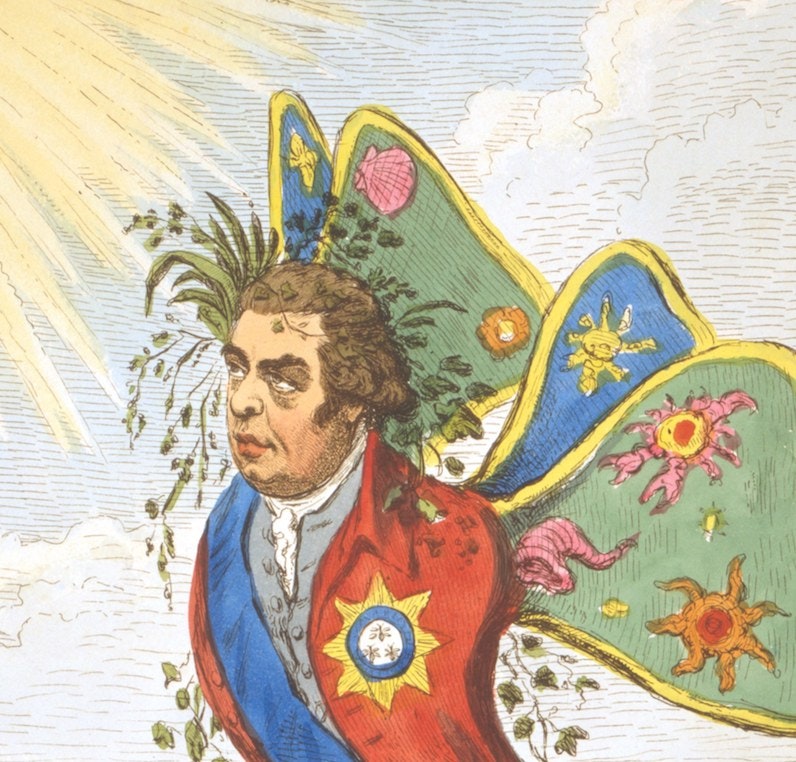 Detail from image shown below: "The great south sea caterpillar, transform'd into a Bath butterfly" (1795) by James Gillray - Source.

Benjamin Robert Haydon, the artist who helped bring the Elgin marbles to the British Museum, was scathing about portraiture. It is, he declared in 1817, ‘one of the staple manufactures of the empire. Wherever the British settle, wherever they colonise, they carry and will ever carry trial by jury, horse-racing, and portrait-painting.’ His list of imperial products might also have included Joseph Banks (1743-1820), who is celebrated as one of Australia’s founding fathers. Although this eminent botanical collector sailed with James Cook to the South Seas and was President of London’s Royal Society for forty-two years, he was pushed into obscurity by his Victorian successors. Towards the end of the twentieth century, Antipodean historians restored Banks’s reputation by showing his crucial role in persuading the British government to invest in scientific exploration.

Banks is important not for his research legacy, but because he was a canny operator who knew how to promote himself as well as making sure that money flowed into science. Despite living before the era of cheap publishing, he excelled at controlling his public image. At six feet and thirteen stone, Banks was an imposing man. James Boswell described him as ‘an elephant, quite placid and gentle, allowing you to get upon his back or play with his proboscis’, although some of his intimate friends regretted that ‘his manners are rather coarse and heavy.’ Whatever the reality, Banks made sure that influential colleagues saw him how he wanted them to. Disingenuously insisting that ‘I do not feel as if Vanity was a Prominent trèe [sic] in my character’, he adopted different guises for his portraits, negotiating with the artists about which engravers should be hired and ensuring that copies were widely distributed. 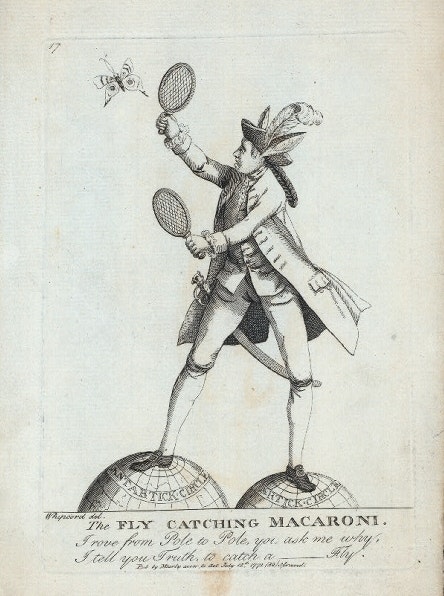 Banks cannot have been happy with the earliest pictures of him that appeared shortly after his return from Australia. Part of a series parodying foppish young gentlemen, they mocked him as a Botanic Macaroni. A Macaroni, explained a gossipy journal, is ‘a kind of animal, neither male nor female, a thing of the neuter gender...It talks without meaning, it smiles without pleasantry, it eats without appetite, it rides without exercise, it wenches without passion.’ In Figure 1, Banks sports a redundant sword and an old-fashioned wig, while the accompanying couplet demeans the value of his extensive travels. His inelegant stance, uneasily straddling the hemispheres, parallels verbal satires denigrating the naivety of his sexual activities in the South Pacific. Gossip about Banks's encounters with Tahitian women raced round London society. However, an entry in his journal suggests that, whatever their boasts, European men did not always find conquest easy; after being offered the bed of a local queen he awoke in the morning to discover that she had stolen his trousers, leaving him to retreat shame-faced back to his fort half-naked.

During the following decades, Banks manoeuvred himself into a powerful position. First he converted himself into the prominent adventurer esteemed by Samuel Johnson as ‘Banks the traveller’, and later in life became an eminent government advisor as Britain’s overseas empire expanded. Banks’s own visual propaganda helped to establish two new male role models: the scientific explorer, and the scientific administrator. 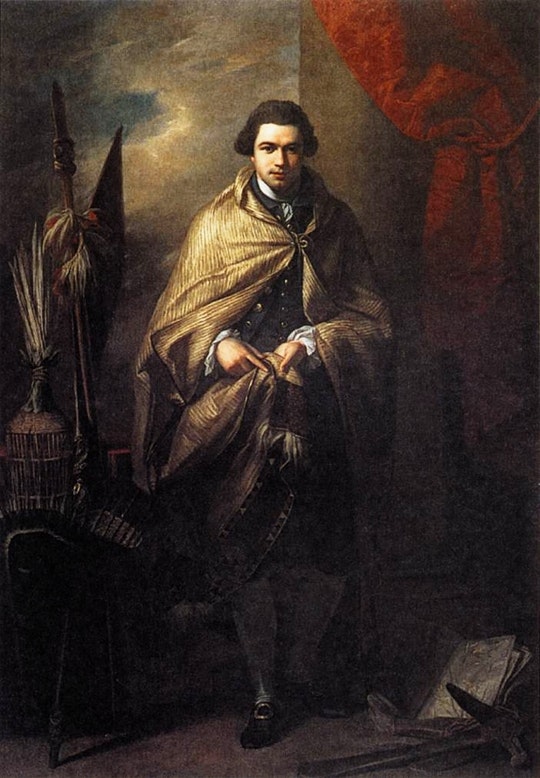 Within a few months of the Macaroni caricatures, Banks had arranged for two of his flattering portraits (Figures 2 and 3) to be engraved and circulated as black-and-white versions. The American artist Benjamin West portrayed him as a romantic young explorer, recently returned from his voyage on Cook’s Endeavour, wrapped in a Pacific cloak and surrounded by exotic objects. In some ways, this is a conventional portrait, painted in a studio with a rich curtain of bark material looped back from an artificial exterior. Although intended for Banks’s family home, it contrasts strongly with the traditional Grand Tour portraits being brought back from Italy as souvenirs. West has created an international scientific traveller rather than a European tourist, replacing classical ruins with rare Pacific artefacts. Pointing to his New Zealand cloak, fringed with the finest dog-hair and made of flax – highly sought after for making canvas sails – Banks presents himself as a young imperial adventurer with a keen eye for trading opportunities. Near his left foot, an unusual Tahitian adze and the expedition’s book of botanical drawings, open to show flax, proclaim him to be a collector of human as well as natural curiosities.

The other portrait from this time is by Joshua Reynolds, who depicted him as a man of action also engaged in intellectual studies: the terrestrial globe emphasizes the extent of his travels, while the pen and books signify a scholar. Half rising in welcome from his chair, Banks displays the restrained manners of a convivial, well-bred Englishman. Borrowing his technique from Rembrandt, Reynolds has sympathetically painted the shiny fur of his collar, the rich red of the sumptuous velvet jacket in the style worn by Italian travellers, and the brocaded waistcoat which stretches over a belly whose rotundity mirrors the globe’s. Banks was literally a man of the world, neither abstemiously dedicated to solitary pursuits, nor prey to the effeminate continental vogue for Macaroni thinness. Conforming to the sporting ideal being constructed, this hearty Englishman evidently enjoyed his food and wine, yet spent his days in virtuous contact with nature. The image’s visual messages are reinforced by the Latin text under Banks’s determinedly clenched left hand, a well-known polemical motto from a Horatian ode: ‘tomorrow we will again cross the immense ocean.’ 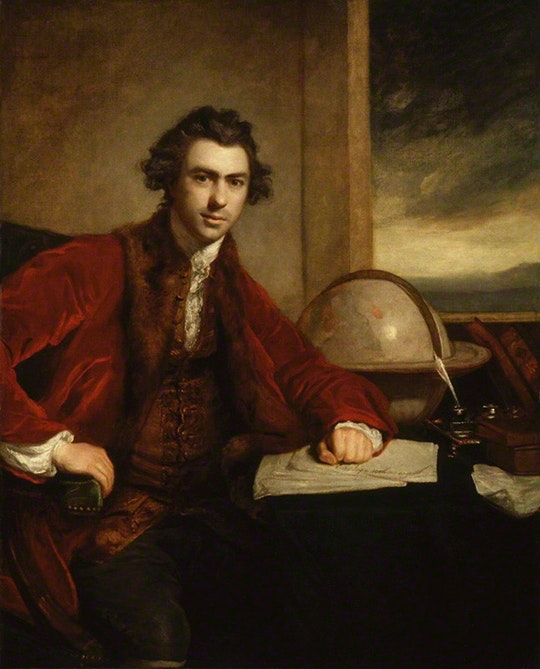 During his long reign as President of the Royal Society, Banks made himself indispensable to the state and to science. Banksian iconography altered significantly in 1795, when the King awarded him the Red Ribbon of the Order of the Bath. Only a few days later, James Gillray published a cartoon lampooning Banks, the South Sea caterpillar, for his transformation into a Bath butterfly (Figure 4). Recalling the earlier pornographic satires of Banks, Gillray emphasized the corrupt sexuality and phallic qualities of this Banksian caterpillar rising from the Tahitian soil, although his prime target was the scientific community which Banks had come to represent. Formulated in the wake of the French Revolution, this caricature articulated conservative fears of the dangerous political implications of philosophical experimentation. The shell by Banks's left shoulder is a bonnet rouge of the French revolutionaries. Parodying the language of the Society’s journal, Gillray described how this ‘New Bath Butterfly...first crawl’d into notice from among the Weeds & Mud on the Banks of the South Sea...it is notic’d and Valued Solely on account of the beautiful Red which encircles its Body, & the Shining Spot on its Breast; a Distinction which never fails to render Caterpillars valuable.’ 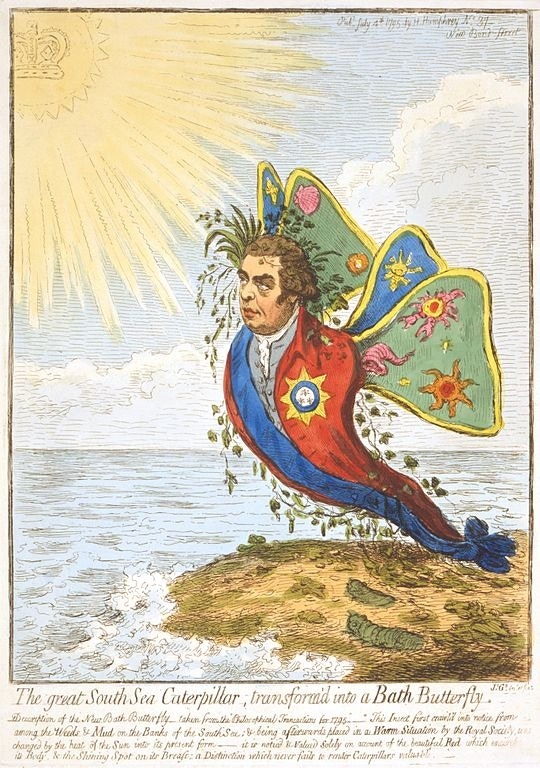 Membership of the Order of the Bath, an honour normally reserved for diplomats and soldiers, signified immense prestige, and the red sash and star feature prominently in Thomas Phillips’s portrait of Banks (Figure 5). Here he is a solid statesman of British science, wearing decorations bestowed by the king and sitting amidst the ceremonial trappings of the Royal Society. Although it had been commissioned by a Spanish astronomer, Banks ensured that this portrait’s details conformed to his own specifications. To celebrate the picture’s purchaser, the pamphlet in the bottom centre describes an astronomical instrument. However, Banks insisted that the far more prominent paper in his hand should be the recent Bakerian Lecture by Humphry Davy, the electrical and chemical experimenter who strongly opposed Banks’s hegemonic rule at the Royal Society and who succeeded him as President. At this time of dissent amongst disparate factions, this portrait reinforced Banks’s authoritarian control over what historians now call the Banksian empire. Appropriately for a botanist, Banks is wearing a waistcoat embroidered with flowers, but he is presenting himself as Davy’s patron, the learned sponsor of research into the physical sciences. By visually uniting electrical chemistry, astronomy and botany in a single image, he symbolically asserted his all-embracing domination of the Royal Society in the face of bids to create smaller, specialized groups. 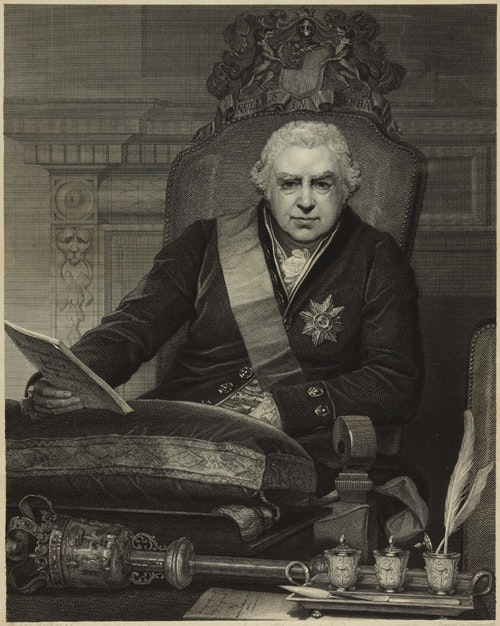 Figure 5: Sir Joseph Banks (1812), an engraving by Nicholas Schiavonetti (after a painting by Thomas Phillips) - Source.

Through his portraits, Banks helped transformed the stereotype of the English male traveller from the foppish aristocrat degenerating on his Grand Tour to the masculine hero risking his life for the sake of England and of science. In the 1770s, he fashioned himself as an energetic yet learned voyager, the gentlemanly participant in a characteristically English male metropolitan culture. By the time he died, he had manoeuvred the Royal Society into an influential position, and had restyled his own image as the authoritative organizer of British scientific expeditions.

By persuading the government to fund international voyages, he ensured the perpetuation of this new male heroic role of scientific explorer, one articulated two years before his death by Mary Shelley. At the beginning of Frankenstein, Captain Walton reminds his sister of their childhood library, packed with exciting tales of earlier voyages, almost certainly including the exploits of Cook and Banks. Walton epitomizes the romantic heroic explorer, the Banks portrayed by Reynolds who combines physical stoicism with intellectual fortitude: ‘I voluntarily endured cold, famine, thirst, and want of sleep; I...devoted my nights to the study of mathematics, the theory of medicine, and those branches of physical science from which a naval adventure might derive the greatest practical advantage’'. By representing himself first as a scientific traveller and then as a statesman organizing scientific exploration, Banks promoted English imperial possession of the world in the name of the new disciplinary sciences.

Patricia Fara lectures in the History and Philosophy of Science department at Cambridge University, where she is the Senior Tutor of Clare College. Her major research specialities are science in eighteenth-century England and scientific imagery, but she also writes and lectures on topics related to women in science. A regular contributor to popular journals as well as radio and TV, she has published a range of