Heather Tweed explores the story of the woman whose obsessive penchant for the lawsuit struck fear into the magistrates and cabmen of Victorian London alike. 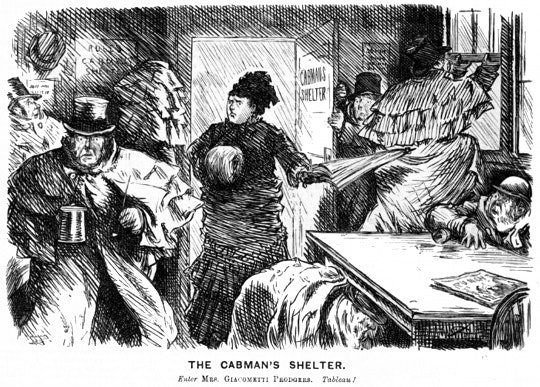 Imagine, if you will, strolling towards a Hackney cabstand in late 19th century London. Suddenly the cry 'Mother Prodgers!' echoes around the streets. The cab drivers scarper, leaving the stand empty but for a seemingly innocuous, overdressed woman: Mrs Caroline Giacometti Prodgers, nemesis of cabmen, zealous litigant and infamous music hall conversation topic.

Over the course of two decades she was to lead a one woman campaign against the notorioulsy truculent cabmen of London. She took to court the publisher of a major newspaper and even her own cook. Her stubbornness was caricatured in print and sung about in music halls. One desperate cab driver went so far as to burn her effigy on bonfire night.

Her first taste of life in the courts came in 1871, when she began proceedings to divorce her husband of ten years, an Austrian naval captain called Giovanni Battista Giacometti. The case set a precedent for divorces in which the wife was wealthier than the husband (the Prodgers family found itself with a considerable fortune through her mother, a wealthy heiress whom her father, the Reverand Prodgers, had married after rescuing her from drowning). The details of Giacometti v Prodgers would regularly make the papers, including such oddities as Mrs Prodgers questioning the legitimacy of her own children, presumably in an attempt to try and disinherit Giovanni from her family fortune. Following the actual divorce there were other legal wranglings. It was reported that her husband Giovanni had given up his whole career at Mrs Prodgers' request and that, after the divorce, he had taken her to court over non payment of a yearly settlement. The Prodgers family, taking his side, agreed on an additional several hundred pounds per year. Mrs Prodgers found herself again in court after failing to pay a shorthand writer she had, debatably, hired during the divorce proceedings.

It was soon after the divorce and its various spin off cases that Mrs Prodgers began her infamous crusade against London cab drivers. Her modus operandi was to catch a cab to a specific destination to which she knew the exact distance (she had familiarised herself with the cost charts), then ask the cabman to stop just at the point where the fare would change. Invariably the cabman would attempt to charge her for the next part of the fare, which she would dispute. One or other party would then threaten a lawsuit and she would continue to goad the often irate cabman into verbal abuse and swearing whereupon she’d immediately threaten another writ. 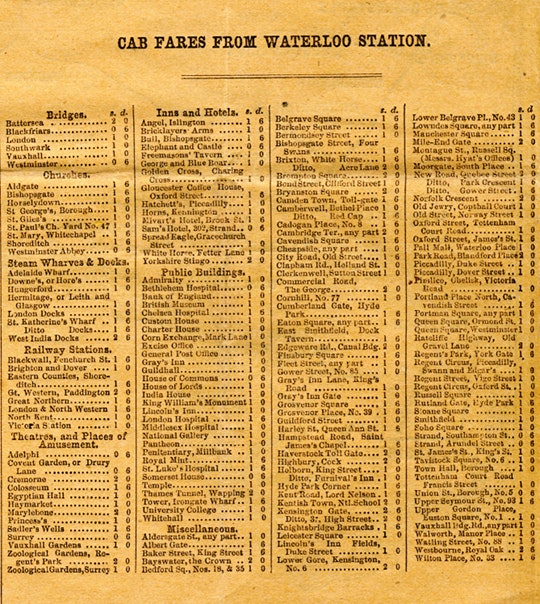 Chart of cab fares by distance from Waterloo Station: (Source)

She was remarkably successful and ended up bringing over 50 cases to court - many of which descended into farce. Reports on the various cases are packed with amusing incidents. There is extended banter over the use of her full name (which she always insisted upon). One judge suggests that it might be cheaper for her to purchase a carriage than keep returning to court.

In addition to cab related litigations she was involved in a string of court cases regarding other matters. She sued her dismissed cook for refusing to leave her house (and continuing ‘to sing about the place’). She sued a newspaper publisher for accidentally tearing her dress during an altercation after she refused to pay the full penny for a paper (which she thought she might be mentioned in). She sued a watchmaker for returning the wrong watch to her house. Her obsessive and sometimes bizarre activity in the courts did not go unnoticed.

In 1875 she had the dubious honour of having an effigy of her burnt on bonfire night, a 'gigantic figure' paraded around on a cab. The police intervened and arrested the cab driver - rather bizarrely on the charge of 'begging' (the accounts don't report if Mrs Prodgers had any influence over the arrest). The judge dismissed the case saying that the cabbie was 'acting as a showman for the amusement of the public' and that it was merely meant as a joke.

Mrs Giacometti Prodgers appeared several times in Punch magazine. A satirical piece in 1890, the year of her death, coincided with controversial plans to fit each Hackney cab with a mechanical device to measure distances and calculate the cost of each journey:

A Autumn-attic happaratus
For measuring off our blooming fares!
Oh, hang it all! They slang and slate us;
They say we crawls, and cheats, and swears.
And we surwives the sneering slaters,
Wot tries our games to circumvent,
But treating us like Try-yer-weighters,
Or chockerlate, or stamps, or scent!
Upon my soul the stingy dodgers
Did ought to be shut up. They're wuss
Than Mrs. JACKERMETTY PRODGERS,
Who earned the 'onest Cabman's cuss.
It's sickening! Ah, I tell yer wot, Sir,
Next they'll stick hup―oh, you may smile―
This:―"Drop a shilling in the slot. Sir,
And the Cab goes for just two mile!"
Beastly! I ain't no blessed babby,
Thus to be measured off like tape.
Yah! Make a autumn-attic Cabby,
With clock-work whip and a tin cape.
May as well, while you're on the job, Sir.
And then―may rust upset yer works!
The poor man of his beer they'd rob, Sir,
Who'd rob poor Cabby of his perks!

Such was her notoriety that the reverse of her name, Sregdorpittemmocaig, was used for a character in The Sunless City, a novel by J.E. Preston and Punch punnily suggested that she had penned her own book after the Hansom cab: 'Hansom Is As Hansom Does'. She also made it onto the pantomime circuit when comedian Herbert Campbell performed a verse about her:

'All great men have their statues and it's but their due,
But I wonder why the ladies don't have them too;
If they did, to the Academy I'd like to send,
A bust of Mrs Prodgers the Cabman's friend.
Of all the strong-minded females she's the worst I ever saw,
Oh, wouldn't she be lovely as a mother-in-law?
At the corner of every cab-rank her flag should be unfurled
As a horrible example to this wicked world.'

The press painted a picture of a formidable if eccentric woman who should be avoided at all costs if one did not wish to encounter her wrath. One might speculate that a certain amount of misogyny and sexism fuelled by the women's suffrage movement may have played its part in the press coverage and urban mythology. Had she been a man might she have been hailed as a champion of consumer rights, rather than dismissed as a caricature? 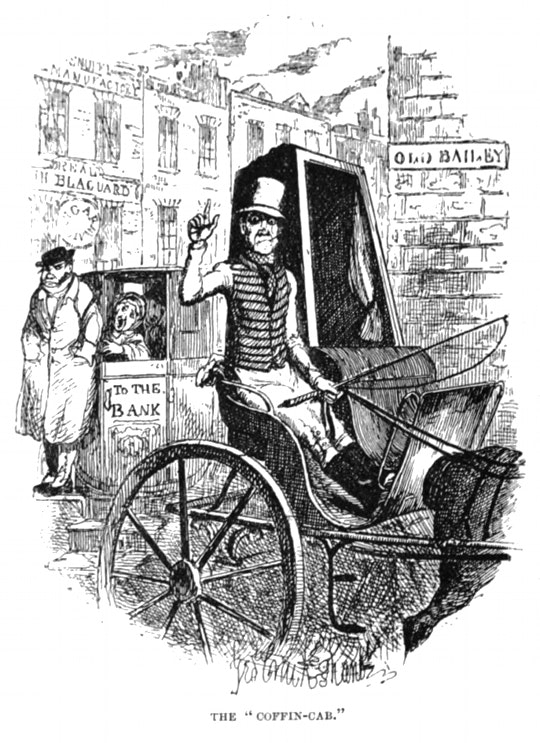 Illustration of a funeral cab passing outside the Old Bailey, from Omnibuses and Cabs: their origin and history (1902), by Henry Charles Moore: (Source)

One person who seemed to take her seriously was the explorer and Victorian polymath Sir Richard Burton, who entertained her in his house, and reportedly supported her campaign. According to Burton’s biographer Thomas Wright two of Burton’s cousins had a running family joke about the relationship between Mrs Giacometti Prodgers and Sir Richard:

At the (Athenæum) club he was never at home to anybody except a certain Mrs. Giacometti Prodgers... according to rumour, there was a flavour of romance about her marriage. It was said that while the laws of certain countries regarded her as married, those of other countries insisted that she was still single. However, married or not, she concentrated all her spleen on cab-drivers,...and having a profound respect for Burton's judgment, she often went to him about these cab disputes, and, oddly enough, though nobody else could get at him, he was always at the service of Mrs. Prodgers, and good-naturedly gave her the benefit of his wisdom. To the London magistrates the good lady was a perpetual terror, and Frederick Burton, a diligent newspaper reader, took a pleasure in following her experiences. "St. George," he would call across the breakfast table, "Mrs. Giacometti Prodgers again: She's had another cab-man up".

Sadly first hand anecdotal evidence does nothing to alleviate the true awfulness of her character. She appears to have been as rude to fellow members of the public as she was to porters and cab drivers. Upon being offered a cup of tea by another passenger on a ship she was travelling on, she allegedly replied “I have only had afternoon tea once in my life, and that was with the Duke of Sutherland". Her arrival in various ports around the world was often reported upon in the local press - followed by a sigh of relief when she departed. Unfortunately one has the impression the same might be said about her departure from life in 1890. Her obituary as reported in foreign papers was blunt and concise:

Mrs. Giacometti Prodgers, the terror of London cabmen, is dead. Her habit was to drive the fullest possible distance for the money, pay the exact legal fare, and then cause the arrest of the cabman for expressing his feelings.

Heather Tweed is a multimedia artist and educator based in the UK. She has exhibited pieces widely throughout the UK as well as in New York, Tokyo and the Library Of Congress in Washington. She has worked with organizations including The British Council Cairo, Bristol City Council and Arts & Business. The ever expanding installation 'Anubis Other World Tour' has been visiting art galleries, caves and other interesting venues scaring, delighting and perplexing in equal measure since 1997. Her website: www.heathertweed.co.uk