Out From Behind This Mask

A Barthesian bristle and the curious power of Walt Whitman’s posthumous eyelids — D. Graham Burnett on meditations conjured by a visit to the death masks of the Laurence Hutton Collection. 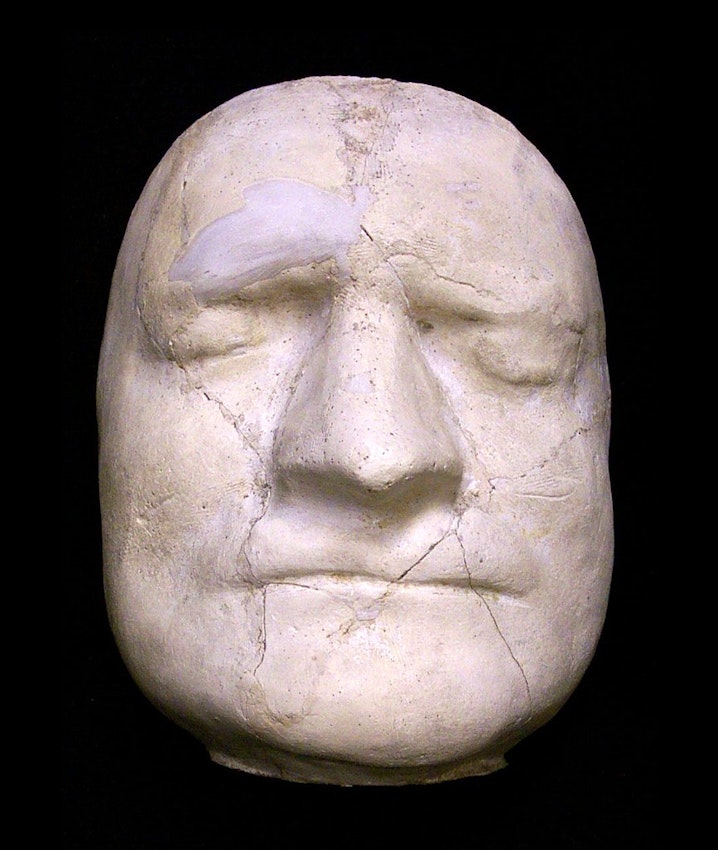 Death mask of Isaac Newton, "one of the most valuable and important masks" in the Laurence Hutton Collection, one of just a few copies from the original made by Louis-François Roubiliac held at the Royal Society — Source.

The Laurence Hutton Collection consists of 103 unique objects in 76 boxes stored in the Rare Books Department of Princeton University’s Firestone Library (Call Number CO770). Most of the cartons contain eighteenth- and nineteenth-century plaster “death masks” — castings made from molds formed directly on the face of notable deceased individuals shortly after their expiration (there are also, in the collection, several “life masks”; a few castings of the skulls of famous persons; a small number of bronzes and carved busts; and three casts ostensibly taken from human hands — including the writing hand of Goethe, his right). Assembled by the American littérateur and essayist Laurence Hutton (1843–1904), the bequest is said to comprise the largest collation of funerary plasters in the United States.

An ancient funerary custom, casting from the face remained a significant memorial practice in Europe and America into the early twentieth century, but the tradition declined rapidly after the 1860s when photography rose to prominence as the primary technology of commemoration. The heyday of the messy business of death mask casting (the face of the fresh corpse had to be liberally smeared with tallow to prevent adhesion of the mold) correlates with the rise of a modern culture of celebrity across the watershed of the eighteenth to nineteenth centuries -- people wanted memorial tokens of “great men” (and women too) in a new era of mass culture. But there was more: the same period saw peak enthusiasm for physiognomy, the science that endeavored to discern human character in the physical manifestation of facial features like the nose and the forehead. In this sense, funeral casting was entangled with impulses both moral and forensic: the angle of Schiller’s brow might have something to teach us about genius, so it needed to be preserved and distributed; at the same time, “scientifically speaking”, it was not clear that all the signs of genius could yet be clearly read in a forehead, so the collection of lots of evidentiary material was propaedeutic to a truly empirical understanding of the human visage. 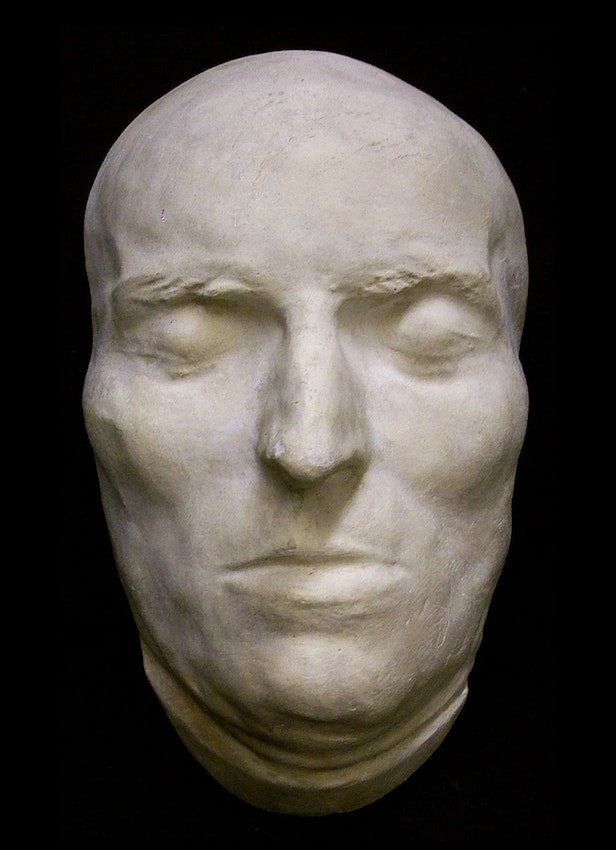 Death mask of Friedrich Schiller from the Laurence Hutton Collection, a copy of the original made by Martin Gottlieb Klauer — Source.

Enthusiasm for all this faded across the second half of the nineteenth century. The story of Hutton’s own collection provides good evidence for the changing mood: he sourced his first acquisitions from a dustbin in lower Manhattan circa 1865 — they had been discarded by the widow of a gentleman, recently deceased; her gesture (she asked the servants to throw out “the nasty, ghastly things”) accorded with a broader shift in mortuary sensibility in the era. But young master Hutton, something of an eccentric, found himself beguiled by the placid visages of Burns, Washington, Sheridan, and Lord Brougham staring up, ghostlike, from the ashcan, and he loaded them into a wheelbarrow, whence they emerged as the nucleus of his collection — or, perhaps better, the first little seeds of his quiet mania for the impression of death’s soft seal upon unbreathing lips.

The collection is affecting. After several hours perusing the still, white shapes in a windowless study center in the basement of Firestone Library, one emerges as from a kind of reading-room Sheol to find that every living face now discloses something of the form it will someday take when slackened and supine. The effect would seem to proceed from a kind of reversal or unwinding of the representational logic from which the masks themselves derive their power — death masks are uncanny not simply because they look like a dead person (though they generally do), but more because they were made from a dead person. This outstrips what the semioticians call “iconicity” (icons are the signs that work because they resemble what they seek to signify) and entangles us in queasy and potent dynamics of participation and immediacy — dynamics of actual continuity. The dynamics of residue. Such forms of continuity and contact always have about them a shiver of real intimacy, even of contamination. Some of the power of death masks clearly proceeds from their preserving a kind of “cold chain” of direct touch to the dead. And this may account for something of the way they seem to convey their placid pallor to the living. After a time, one comes to see through them. 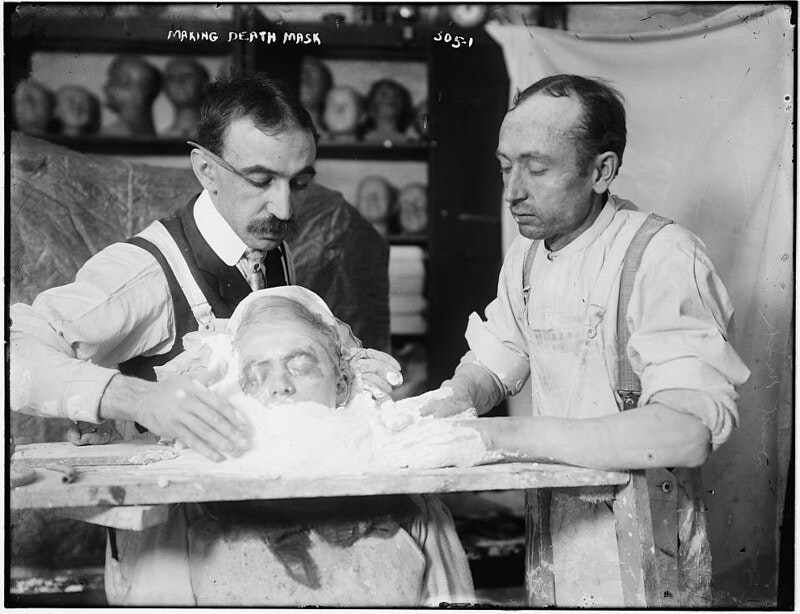 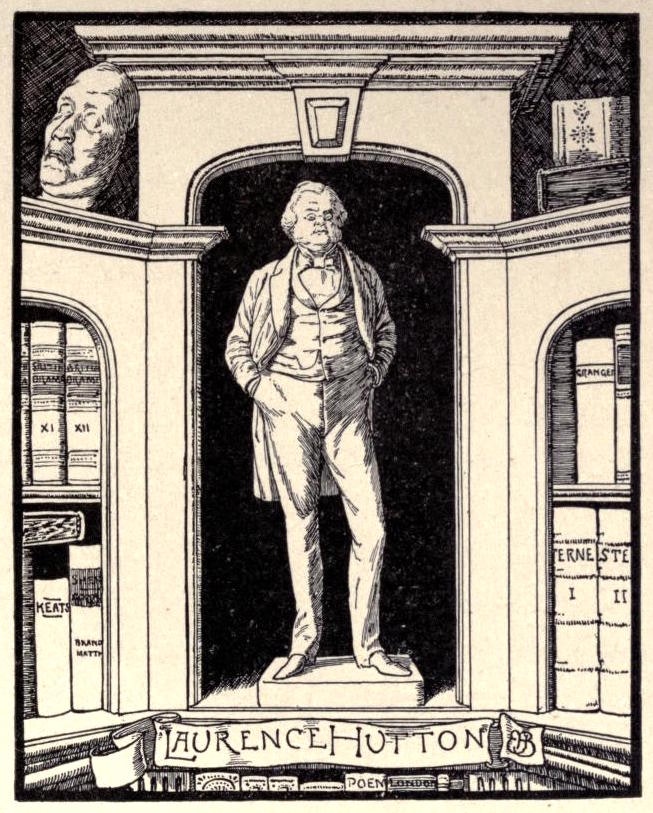 Laurence Hutton's bookplate, complete with death mask top left, as printed in Talks in a Library with Laurence Hutton (1905) — Source.

Hutton himself was not insensible of such matters. In one of his many essays on the collection, he wrote of an episode in which several actual hairs of the deceased could be discerned on a death mask, as if the plaster had some strange life within it. The explanation was more prosaic: Inadequately lubricated, a hair here and there had come to be fixed in the plaster from which the mold was made. Then, when the mask itself was formed in that mold, the latter yielded its plucked bristle back to the precise locus (on the death mask) from which it had been pulled (on the human).

What sort of artifact is this? What is the nature of the historicity of such a hair? What role can it be said to play in the economy of representation?

In a historical moment enthralled by new forms of ethereal dematerialization and frictionless access (to the past, to texts, to commodities, to information, to each other), we are, I think, in need of a theory for such a bristle.

One reaches, perhaps, for Roland Barthes’ notion of the “punctum” from Camera Lucida, the French author’s great meditation on photography and death. A punctum is the point in a photograph that wings woundingly at the viewer from out of the mere “subject” of the image — it is that which whistles out from what the photograph “manifests” (what it manifests to “studium”, which Barthes defines as that familiar condition of self-possessed attention to an image). Here is what Barthes says: “A photograph’s punctum is that accident which pricks me (but also bruises me, is poignant to me).” It is the part of a photograph that intimately implicates the viewer — though not simply any old form of implication will do. The punctum specifically implicates mortality. We might say that the punctum is the moment we discover a kind of death-navel (in ourselves, in the photographic image), since the punctum is the still-not-wholly-healed scar of an invisible umbilicus linking each of us to fatality, our un-mother.

And what then of a beard bristle such as Hutton describes?

Barthes is interested in photographs. The analytic of the punctum belongs to photography as form, as a specific technology of image making — one that works in time in particular ways, one that memorializes photographically. But the bristle is not a photographic proposition. It comes from another place, and interrupts another representational system.

What, then, is a thingly punctum? A reified punctum? A punctum that escapes the logic of representation to participate in the corporal economy of the relic?

One answer: A reminder of the extent to which we rely on the logic of representation to hold death at bay.

This seems particularly significant to consider in the context of death masks, which discharge this function of representation very imperfectly. 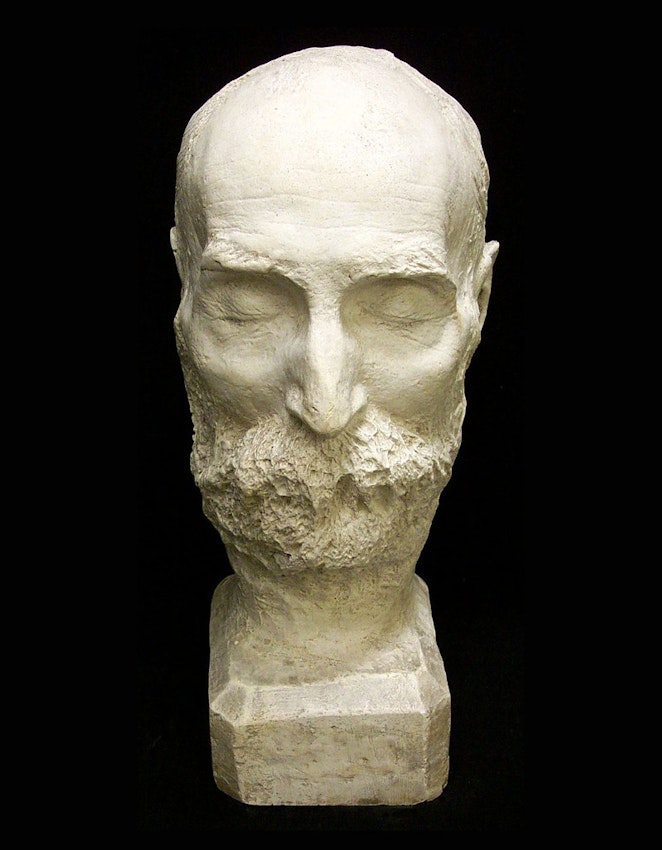 Death mask of Walt Whitman from the Laurence Hutton Collection, the original as cast by Samuel Murray assisted by Thomas Eakins — Source.

There is, for me, a proper Barthesian punctum in the photograph above, which depicts the death mask cast of Walt Whitman in the Hutton Collection. No, it is not the fact that the sculptor (the young Philadelphia artist Samuel Murray, assisted by his mentor Thomas Eakins) chose to elaborate the traditional frontal “mask” into a full sculptural head — though this is uncanny. Nor is it the wonderful frankness of the beard, which has been permitted to show as limp and wet (as it would have been, soused with animal grease), rather than tooled to appear suitably leonine or Mosaical — though this too gives the work a stark immediacy. No. The punctum for me lies in the bard’s closed eyes, and the sense of what lies behind those plaster lids — for the living Walt Whitman actually saw Hutton’s collection of death masks with his own living eyes. Which is to say, the plaster cast of Whitman’s eyes can be understood as a figure for something like the consciousness of the collection itself: it is locus in the collection of a representation of the collection; it is the site where the collection maintains its self-(un?)awareness. We might go so far as to say that these cast eyelids should be understood as the death mask of Hutton’s collection as a whole, which, no longer displayed in his handsome townhouse halls, has come to be, rather, entombed in the sepulchral catacombs of an underground library.

And that’s not all.

Shortly before he died, Whitman took a long look at an engraved portrait of himself made by the English illustrator and pamphleteer William J. Linton — an image published in a late edition of The Leaves of Grass, where it was tipped in on coated paper opposite the great death poem “The Wound-Dresser” (which it therefore kissed forever within each copy of the closed book). The poet’s meditation upon this figure of himself occasioned yet another poem, one of his last, entitled “Out from Behind This Mask”, subtitled “To Confront a Portrait”.

The first stanza will serve as ventriloquy and epitaph, annunciation and last word:

OUT from behind this bending rough-cut mask,
These lights and shades, this drama of the whole,
This common curtain of the face contain'd in me for me, in you
for you, in each for each,
(Tragedies, sorrows, laughter, tears — O heaven!
The passionate teeming plays this curtain hid!)
This glaze of God's serenest purest sky,
This film of Satan's seething pit,
This heart's geography's map, this limitless small continent, this
soundless sea;
Out from the convolutions of this globe,
This subtler astronomic orb than sun or moon, than Jupiter, Venus,
Mars,
This condensation of the universe, (nay here the only universe,
Here the idea, all in this mystic handful wrapt;)
These burin'd eyes, flashing to you to pass to future time,
To launch and spin through space revolving sideling, from these
to emanate,
To you whoe'er you are — a look. 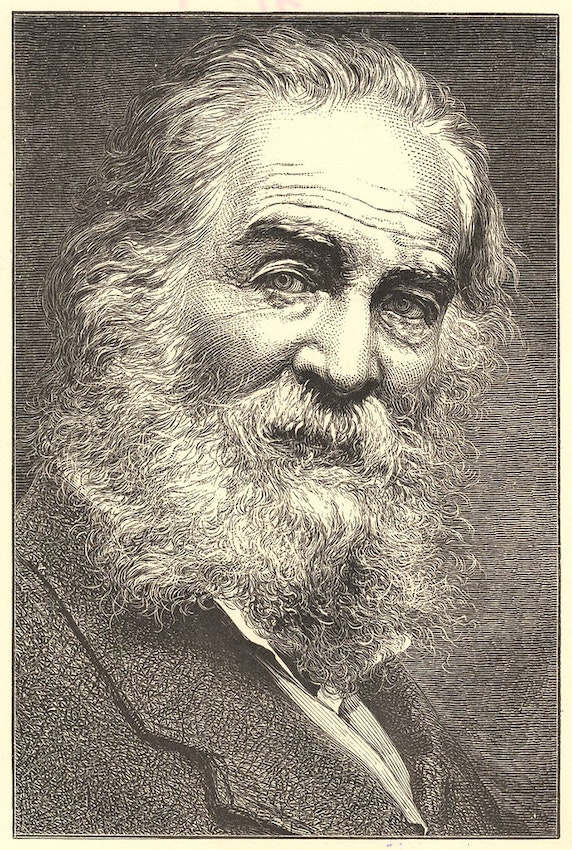 William J. Linton's engraving of Walt Whitman which appeared in the 1876 edition of Leaves of Grass and which inspired Whitman's "Out from Behind This Mask" — Source.

D. Graham Burnett is based in New York City. He writes and makes things. He is associated with the research collective ESTAR(SER) and teaches at Princeton University. He edits the Conjectures series for The Public Domain Review.