Lucy Worsley, Chief Curator at Historic Royal Palaces and author of Courtiers: The Secret History of the Georgian Court, on the strange case of the feral child found in the woods in northern Germany and brought to live in the court of George I. 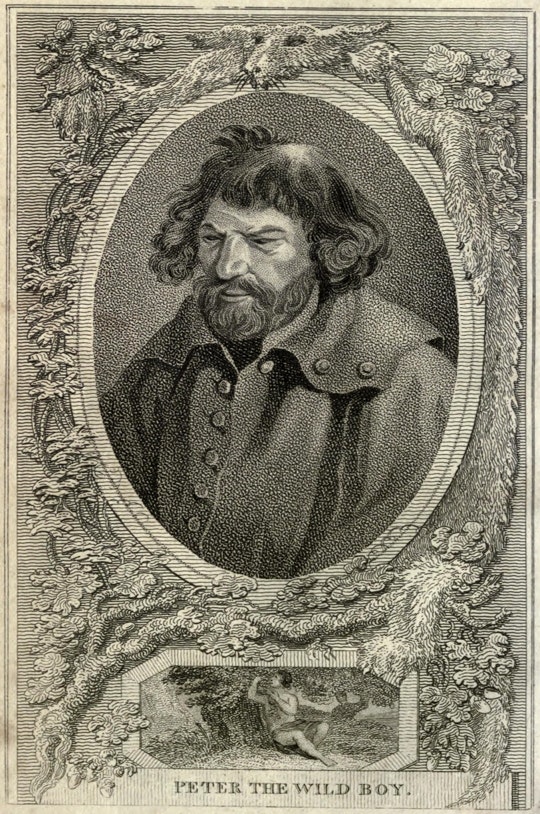 On the evening of 7 April 1726, George I’s courtiers crammed themselves into the drawing room at St James’s Palace. The room buzzed with their trivial chatter about balls and masquerades, everything seemed just as usual.

But a sensational event would make this particular palace party the most memorable in years. The doors opened to reveal a brace of footmen, bearing between them a grinning, bushy-haired boy. He was perhaps twelve years old.

There was something decidedly odd about this youth. For a start, he seemed not the least ‘embarrassed at finding himself in the midst of such a fashionable assembly’. Once lowered to the floor, he scuttled about using his arms, like a chimp, and scampered right up to the king. The courtiers were scandalised by his audacious lack of ceremony.

This was their first encounter with Peter, the curious ‘Wild Boy’. Green-eyed, with strong teeth, he had ‘a roving look’ in his eyes. He often giggled, and lacked the solemn and stately demeanour of the other courtiers. Strangest of all, he could not speak.

Everyone shared his delight when he heard a watch striking the hour for the first time, and Peter’s comical ways provided much amusement. But he also sparked off engrossing philosophical debates. His very existence raised the fascinating question of what it really meant to be human.

Peter’s unlikely journey to court began in the German forest of Hertswold. In 1725, local forest folk had come across a feral child, ‘naked and wild’. He’d been living all alone in the woods, eating nuts and acorns.

There was a general assumption that the Wild Boy was ‘rescued’ from the wilderness, but the more detailed accounts of his capture reveal that he was actually hunted down. He took refuge up a tree, which had to be felled before he could be caught. His captors didn’t know quite what to do with him, so they thrust him into the local ‘House of Correction’.

But news of Peter and his bizarre, speechless condition reached the nearby palace of Herrenhausen, the summer home of the German-born George I. The king ordered Peter to be brought from the prison to the palace, made him a member of his household, and took him back to London. 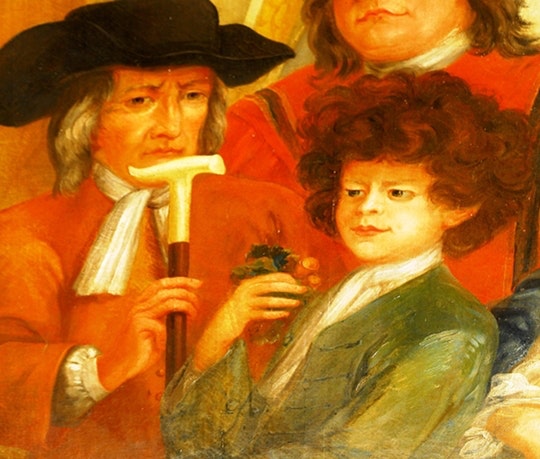 Now the Wild Boy became a kind of court pet. Soon after his arrival, he was taken to Kensington Palace to sit for William Kent, the painter who was decorating the King’s Grand Staircase there with portraits of the king’s favourite servants. Peter’s painting still remains there today.

The courtiers were entranced by Peter, and a mania for the Wild Boy took off outside the palace gates as well. Londoners crowded to see the waxwork of Peter which appeared in Mrs Salmon’s celebrated gallery in the Strand. Writers hailed him as ‘the most wonderful wonder’, and ‘one of the greatest curiosities of the world since the time of Adam’.

Throughout the centuries, feral children like Peter have aroused feelings of mingled pity and fear. More seriously, Peter fascinated the intellectuals then exploring the questions raised by the Enlightenment. Philosophers were beginning to assert the primacy of reason over superstition. They even debated the very definition of a human being, and whether or not people had souls. Peter proved to be a stimulating test case. If he possessed no speech, did he therefore possess no soul? Was he really just an animal? Or was he an admirable and ‘noble savage’, who’d lived a life untainted by society? Jonathan Swift remarked that the subject of the Wild Boy had been ‘half our talk this fortnight’, and Daniel Defoe thought he was the most interesting thing in the world. 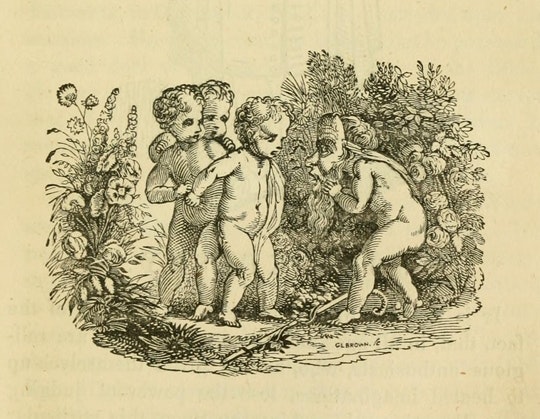 The Wild Boy became wonderful fodder for the city’s satirists. The few accurate facts about his life were soon forgotten or distorted in a deluge of pamphlets now printed about him. Ostensibly about Peter himself, their writers were really using him to mock the court, the courtiers, and even the whole silly race of men. The Wild Boy’s lack of worldly knowledge exposed the shallow foundations upon which fashionable society was built. London’s satirists invented more and more ludicrous transgressions that Peter was said to have committed: he licked people’s hands in greeting; he wore a hat in the king’s presence; he’d stolen the Lord Chamberlain’s staff.

Daniel Defoe joined in with his own wild cadenza of speculation. It would be a terrible indictment of the present age, Defoe argued, if the Wild Boy had actively chosen his previous way of life, to ‘converse with the quadrupeds of the forest, and retire from human society’. He was really suggesting that Peter was in fact the only truly sensible person alive.

Back at the palace, the Wild Boy soon began to show signs of distress. The first time he saw someone removing stockings, he was ‘in great pain’, thinking the man was peeling the very skin from his leg. The courtiers had enormous trouble in getting Peter into a new green suit. As well as the daily struggle over his clothes, Peter could not be made ‘to lie down on a bed, but sits and sleeps in a corner of the room’. These details of a little boy bewildered pierce the heart. 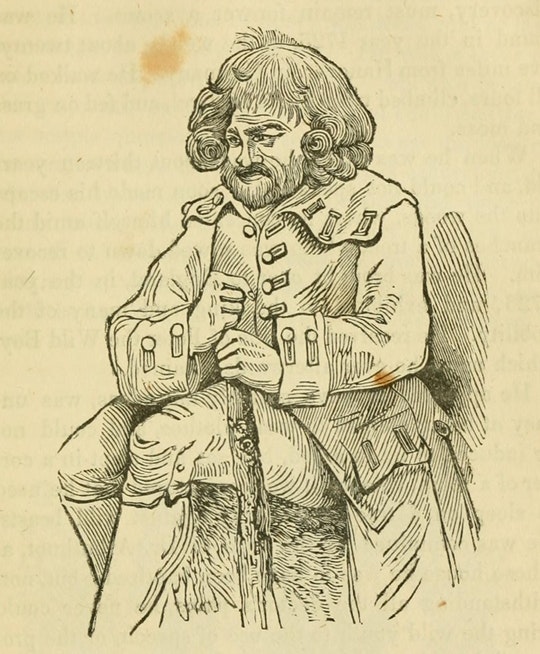 Peter’s tight court coat, cut much more restrictively than a modern jacket, prevented him from ‘crawling or scrambling about’, and he learned to walk. Eighteenth-century court garments were designed to make the wearer stand with shoulders lowered, chest puffed, and toes turned-out. They began to do their work upon the Wild Boy’s posture.

Eventually he grew used to his fine clothes. He also learned to pick pockets, from the most innocent of motives: ‘if he finds nuts or fruits, he is very glad of them’. This was charming and amusing. But when Peter stepped over the invisible line that defined acceptable behaviour, he was beaten on the legs with a ‘broad leather strap to keep him in awe’.

George I, exasperated by Peter’s wild ways, put him under the care of the medical doctor John Arbuthnot to be taught to speak ‘and made a sociable creature’. Dr Arbuthnot is another of the figures depicted in William Kent’s staircase paintings at Kensington Palace. He gave Peter daily lessons, but progress was slow as the Wild Boy had ‘a natural tendency to get away if not held by his coat’.

Peter did indeed learn to ‘utter after his tutor words of one syllable’. But he would never really engage with other people through language. Dr Arbuthnot had Peter baptised nevertheless, just in case he did have a soul.

Even with the advantage of hindsight, it’s not exactly clear what Peter’s condition was. It is likely that he was autistic, and it’s been argued that he had Pitt-Hopkins syndrome. This condition would explain his learning difficulties and the remarkable Cupid’s-bow shape to his upper lip. Perhaps Peter was abandoned in the woods in the first place by a mother who considered him damaged or defective.

Eventually the courtiers grew bored with him, and Peter was sent to live in retirement on Broadway Farm near Berkhamsted in Hertfordshire. There he lived a long and quiet life, remaining ‘exceedingly timid and gentle in his nature’, fond of gin, and of onions. He liked to watch a fire burn, and loved ‘to be out on a starry night’. In autumn he would still show ‘a strange fondness for stealing away into the woods’ to feed upon acorns.

Peter constantly visited by the curious, including the novelist Maria Edgeworth, who commented that in old age he looked just like a bust of Socrates. He was in some measure loved by the farming families who looked after him. After the sudden death of his last carer, Farmer Brill, Peter ‘refused food, pined away, and died in a few days’. It was 22 February 1785.

I have visited his grave in the churchyard of St Mary’s, Northchurch, near Berkhamsted, which is often laid with flowers by an unknown person. When I asked a member of the congregation if she knew who places the bouquets, I was moved by her answer.

‘We’ve no idea who leaves the flowers’, she said, ‘but it must be someone who thinks that Peter should be remembered’. And so he should be. 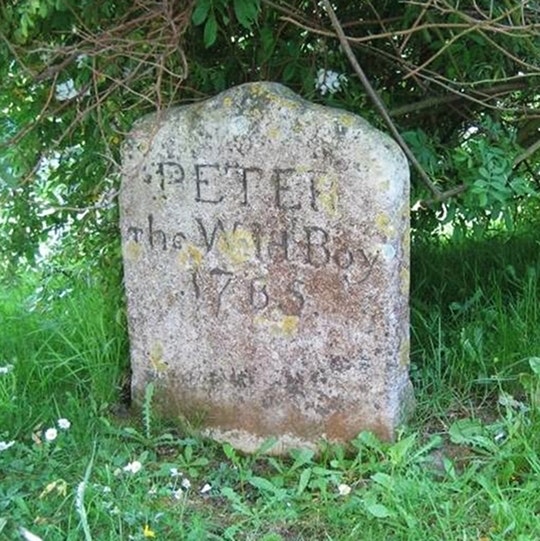 Lucy Worsley is Chief Curator at the charity Historic Royal Palaces, which opens the unoccupied royal palaces of London including The Tower of London, Hampton Court and Kensington Palace to 3.2 million visitors a year. Her book Courtiers: The Secret History of the Georgian Court was published by Faber and Faber in 2011. She has also presented a BBC television series on the topic of her new book If Walls Could Talk, An Intimate History of the Home (Walker Books, 2012). Please visit her website.