The Art of Philosophy Visualising Aristotle in Early 17th-Century Paris

With their elaborate interplay of image and text, the several large-scale prints designed by the French friar Martin Meurisse to communicate Aristotelian thought are wonderfully impressive creations. Susanna Berger explores the function of these complex works, and how such visual commentaries not only served to express philosophical ideas in a novel way but also engendered their own unique mode of thinking. 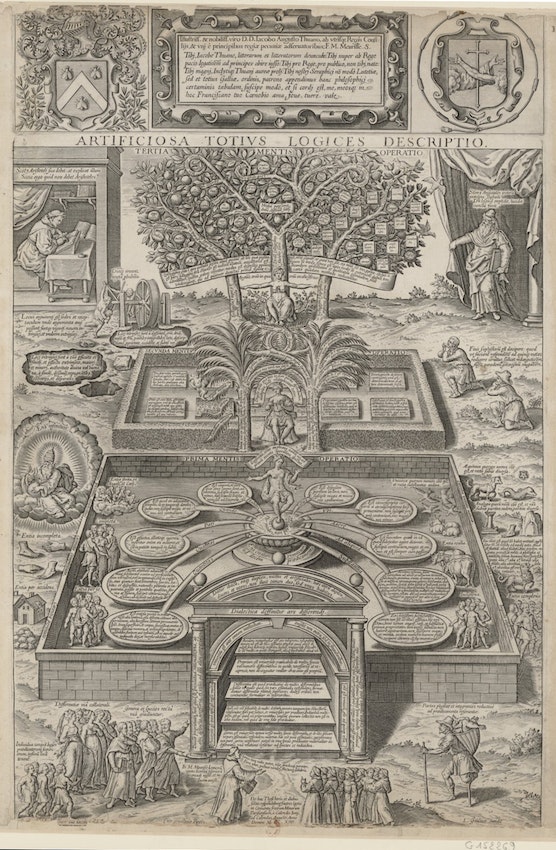 In 1619, Martin Meurisse (1584–1644), a Franciscan professor of philosophy at the Grand Couvent des Cordeliers in Paris, became embroiled in a debate with the Protestant pastor François Oyseau (1545–1625) about the significance of the rituals of the mass. In the heat of the exchange, and riled by an accusation that he was a poor logician, Oyseau decried Meurisse to be an incompetent judge as he was “a logician only in picturing and copper-plate engraving.”1 Oyseau’s barb was alluding to a series of extravagantly engraved thesis prints, broadsides incorporating both text and image, that Meurisse had designed for his philosophy students to use during their oral examinations. Although for Oyseau they were mere “frivolous allegories”, these pedagogical prints are now considered among the most important early modern images of philosophy, and their inventive iconography inspired new visualizations of thought in a range of drawn and printed sources: from the lecture notebooks of students in Leuven to eighteenth-century German textbooks.

Produced in collaboration with the engraver Léonard Gaultier (1560/61–1635) and published by Jean Messager (1572–1649), Meurisse’s prints are wonderfully dense and complex creations — elaborate depictions of landscapes and architectural structures adorned with a dizzying array of figures, animals, and objects, and annotated with quotations from the writings of classical and scholastic philosophers. The first, a summary of logic entitled Artificiosa totius logices descriptio (Artificial Description of Logic in Its Entirety), appeared in 1614 (see image above). The following year, Meurisse and Gaultier produced the Clara totius physiologiae synopsis (Clear Synopsis of Physics in Its Entirety), which visualizes Aristotelian natural philosophy. Their third, the Laurus metaphysica (Laurel of Metaphysics) of 1616, represents metaphysics, and their fourth, Tableau industrieux de toute la philosophie morale (Artificial Table of Moral Philosophy in Its Entirety), of 1618, depicts moral philosophy. In addition, a fifth thesis print, entitled Typus necessitatis logicae ad alias scientias capessendas (Scheme of the Necessity of Logic for Grasping the Other Branches of Knowledge), inspired by the Descriptio, appeared some years later in 1622. Also engraved by Gaultier and published by Messager, this broadside was designed by the Carmelite philosophy professor Jean Chéron (1596–1673).2 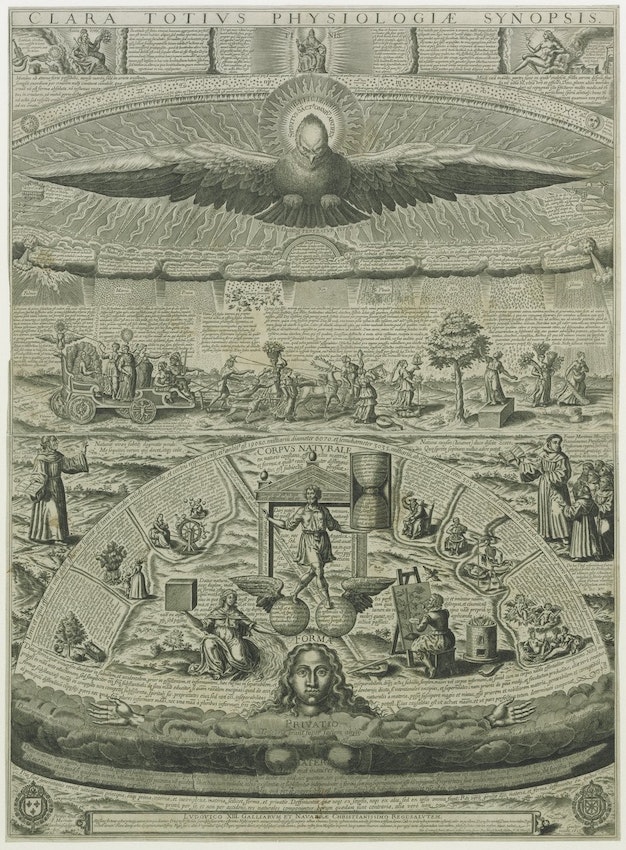 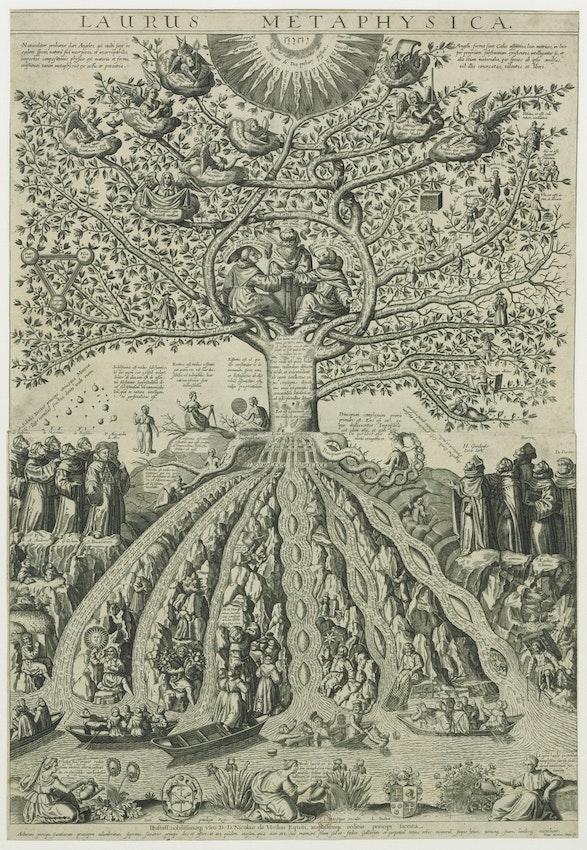 All of these broadsides are extremely impressive in scale — not only physically as regards to size, but also in relation to the tremendous amount of work and close collaboration among the wide network of scholars, artisans, engravers, patrons, and printers involved. The effort and significant cost expended to create these and other philosophical images attest to how highly such prints were valued in the study and transmission of philosophy. Although the broadsides of Meurisse, Chéron, and Gaultier were relatively little known through the seventeenth and eighteenth centuries, for a handful of academics across Europe they had a deep impact on the philosophy classroom. Descriptio, Laurus metaphysica, and Tableau were reproduced and translated into English by Richard Dey, a graduate of the University of Cambridge, in mid-seventeenth-century London, while a copy of Meurisse’s Synopsis was displayed at the anatomy theater of the University of Leiden by Ottho van Heurne (1577–1652), professor of medicine.3 Meurisse’s acclaim as a designer of illustrated broadsides was also reported in the Hungarian travelogue Europica varietas (1620) by Márton Szepsi Csombor (1594–1623) who, while visiting Paris in 1618, was “anxious above all else to become acquainted with the celebrated, renowned, and highly intelligent friar, who with great mastery put the entire philosophy course on a[n engraver’s] plate.”4

These thesis prints’ kaleidoscopic mobile of images and texts visualizes something more than just harmonious principles of philosophy — in a way, it mirrors the early modern European mind itself as it produced and transmitted knowledge. For the knowledge generators of this time, the viewing and creation of imagery functioned as important instruments of philosophical thought and teaching. There were two particularly important mechanisms at play here. First, artists, students, and philosophers used the space of the page to map theoretical relationships, so that in creating and looking at these visual representations, they could think through the mechanism of spatial constructs. Second, through producing or simply examining figurative images, they could think through the mechanism of visual commentary. Both spatial constructs and visual commentaries worked together as part of a common project of philosophical thinking through visual representation.

Logic instruction at this time was based primarily on a collection of texts by Aristotle known as the Organon and on Porphyry’s third-century text, Isagoge, which served as a preface to the Organon.5 The teaching of these treatises reflected the view that logic should be organized into the three mental operations: apprehension, judgment, and ratiocination (or reasoning by using syllogisms). It is through apprehension, the first operation, that the conception of an object or term is brought to mind: for example, the apprehension of such concepts as “dog” and “mammal”. Through judgment, the second operation, simple concepts are then combined or divided to create propositions ( “Dogs are mammals”). By way of ratiocination, the third operation, the mind organizes these propositions to form syllogisms ( “Dogs are mammals / All mammals are animals / Thus dogs are animals”). 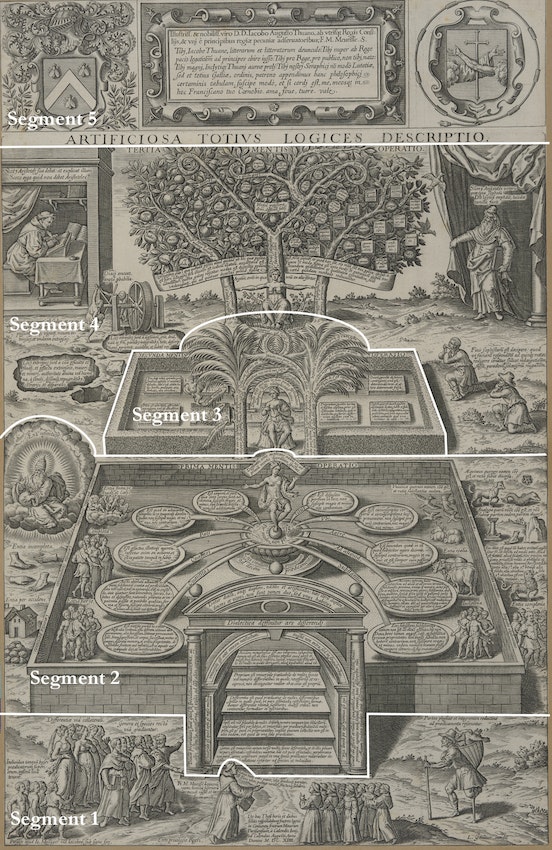 To make sense of how the images within these broadsides use the space of the page to organize such conceptual affiliations, let us take a look at how the Descriptio print of Meurisse and Gaultier is structured.6 By slicing it up into horizontal segments, we can better see how the layers build upon one another successively, from the bottom of the page to the top (see image above). Segment one offers information about the engraving’s production and shows Meurisse and his students, surrounded by various personifications of logical concepts — crowds of children, men, and ladies, a one-legged laborer bearing a basket (of human limbs) — all approaching a walled garden. 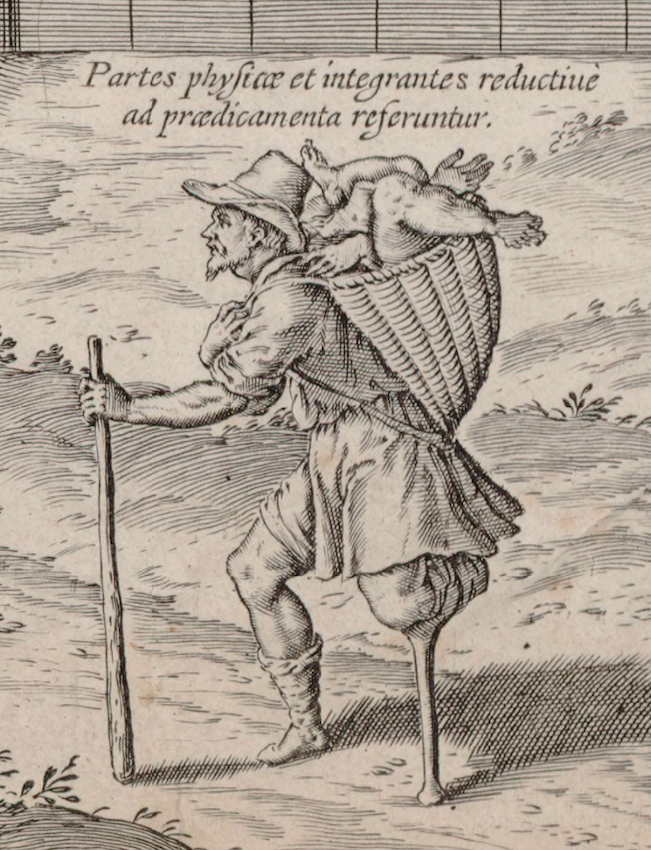 Detail of the man with the basket of limbs, from Meurisse and Gaultier's Artificiosa totius logices descriptio, 1614. The figure visualises a passage in Boethius's De divisione (ca. 515) concerning a form of partition. The body parts in the man’s basket, which seems also to hold his left foot, represent an explication of how a whole human body may be divided into parts — Source.

The inside of this garden, which appears in segment two, represents the realm of the first operation of the mind (apprehension), dominated by a central fountain, around which water spurts into dishes. To either side of these basins are six groups of real, logically graspable entities which contrast with the respective entities positioned just outside the garden, directly across the wall. So, for example, we see a group of “finite” angels inside, and over the wall outside, wearing a tiara and holding a globe, encircled and sustained by an incandescent cloud, an image of “infinite” God. Likewise elsewhere, a group of “complete” humans inside, and outside an array of disembodied hands and feet; three cows (identified as “real entities”) inside, and outside a chimera (marked “rational being”). 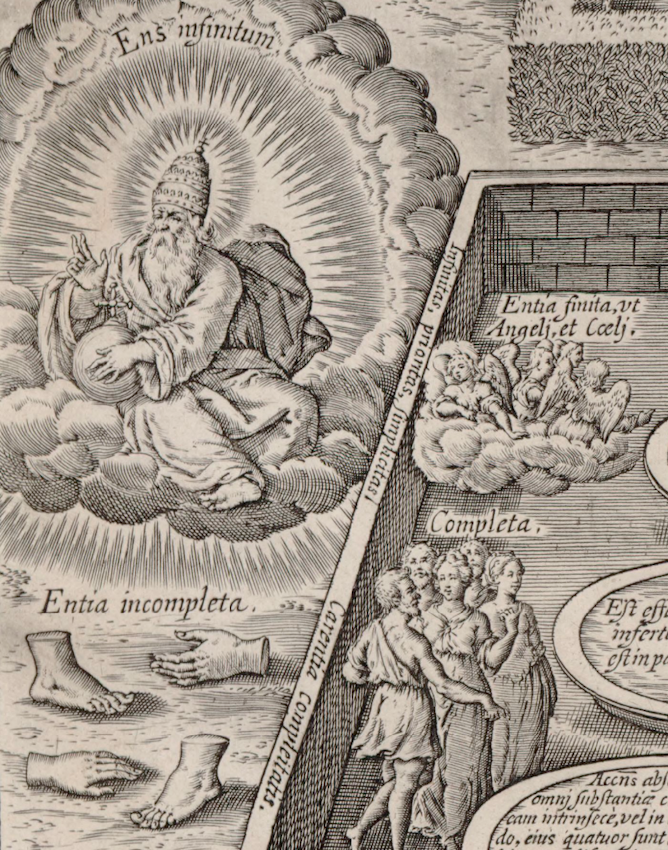 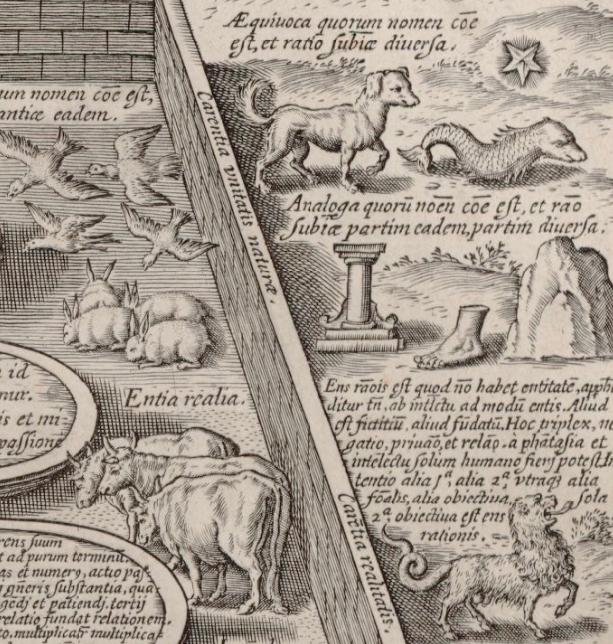 In the third segment above we meet another garden, this one, rather less busy, explicating the activity of the second operation (judgment). The fourth segment pertains to propositions that are organized into syllogisms (a result of the third operation, ratiocination). Crowning the whole piece, in segment five, is a dedication to the French statesman and bibliophile Jacques-Auguste de Thou (1553–1617), flanked on the left by de Thou’s coat of arms and on the right by the arms of the Franciscans.

Altogether the broadside allows viewers to grasp at a glance how a philosophical discipline can be divided into its parts and how its parts relate to one another and the greater whole. The individual sections of the print cannot be fully appreciated when seen in isolation; they gain their significance and meaning from their location within the broadside’s spatial system.

In addition to relying on the space of the page to show how the field of logic is organized, the Descriptio also features visual commentaries that offer original interpretations of Aristotle’s age-old system. Rather than merely reiterating already extant philosophical concepts, the visual form of this engraving enriches theoretical knowledge, functioning as a visual exegesis which produces new meaning. In a detail from segment three, for instance, we find two palm trees forming an archway, inscribed with a description of the creation of propositions. Meurisse has carved “noun” and “verb”, central elements in any proposition, into the trunks: each is “an utterance signified by convention”. 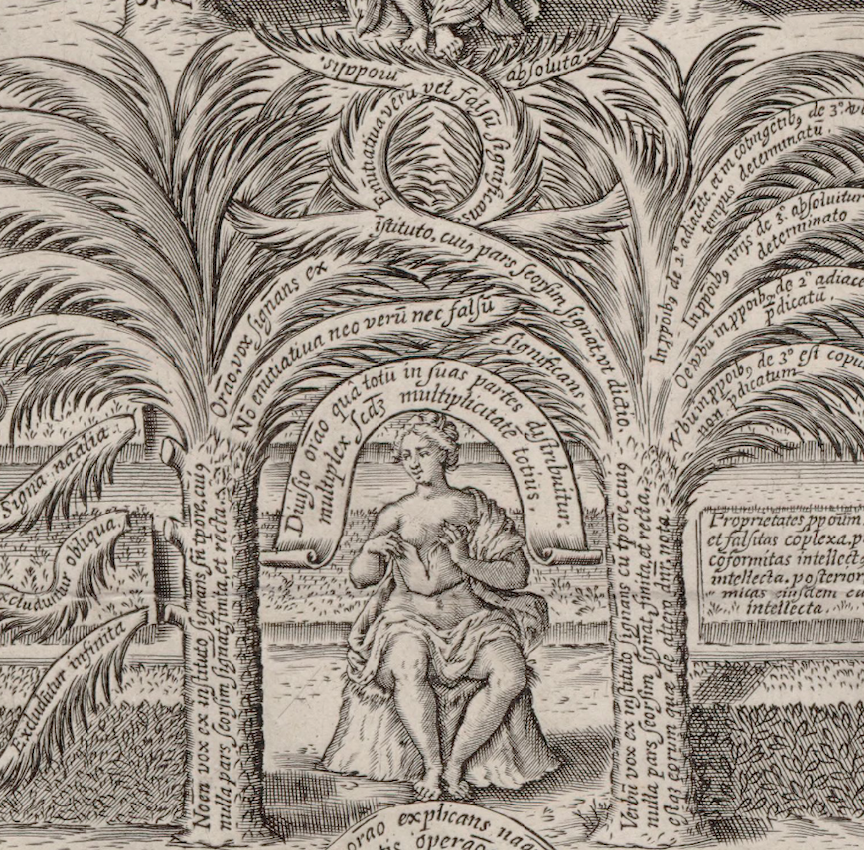 Why palm trees in particular? Palms are dioecious — their male and female flowers grow on separate plants — and were thought, at the time, to reproduce by intertwining with the branches of palm trees of the opposite sex. In this way mating palm trees became popular emblems for conjugal love and fertility in French iconography between the mid-sixteenth and mid-eighteenth centuries.7 Meurisse and Gaultier are here therefore, drawing an analogy between the mating of trees and the production of propositions: adapting the emblem in a manner that they expected viewers of the broadside to understand and appreciate.8 This detail highlights the varied sources of inspiration for the designers of philosophical broadsides, but it also indicates the richness of their visual commentaries. Whereas a textbook from the period might simply define a proposition as the sum of its parts (a noun and a verb), this image presents a much more intricate and complex interpretation of the proposition, likening it to a new organic entity, a proposition generated by mating plants.

Even though the philosophical visualizations of Meurisse, Chéron, and Gaultier had an international reputation in the early modern period, they have since been largely forgotten, and although there is great interest among intellectual historians today in challenges to Aristotelian orthodoxies during the “scientific revolution”, no major study has focused on the visual documents integral to this epistemic shift. It is true that in recent years, a newly emerging and rich body of scholarship has started to explore the frescoes, oil paintings, prints, and drawings relating to the works of anti-Aristotelian philosophers such as Galileo Galilei (1564–1642) and Thomas Hobbes (1588–1679).9 But these studies consider only a piece of a larger picture, as it were. Image and image production were, in fact, vital in the early modern intellectual movements that embraced and developed Aristotelian thought, as evidenced by the many visual representations found among pedagogical and scholarly materials from the period, with perhaps no finer example than these thesis prints of Meurisse, Chéron, and Gaultier.

The essay above is adapted from THE ART OF PHILOSOPHY: Visual Thinking in Europe from the Late Renaissance to the Early Enlightenment by Susanna Berger. Copyright © 2017 by Princeton University Press. Reprinted by permission.

Susanna Berger is Assistant Professor of Art History at the University of Southern California. Her research and teaching explore diverse facets of art and visual culture from printed and drawn illustrations of philosophical knowledge to central works in the history of European early modern painting. Her first book, The Art of Philosophy: Visual Thinking in Europe from the Late Renaissance to the Early Enlightenment, appeared with Princeton University Press in March 2017.