Bennett Gilbert peruses the sketchbook of 15th-century engineer Johannes de Fontana, a catalogue of designs for a variety of fantastic and often impossible inventions, including fire-breathing automatons, pulley-powered angels, and the earliest surviving drawing of a magic lantern device. 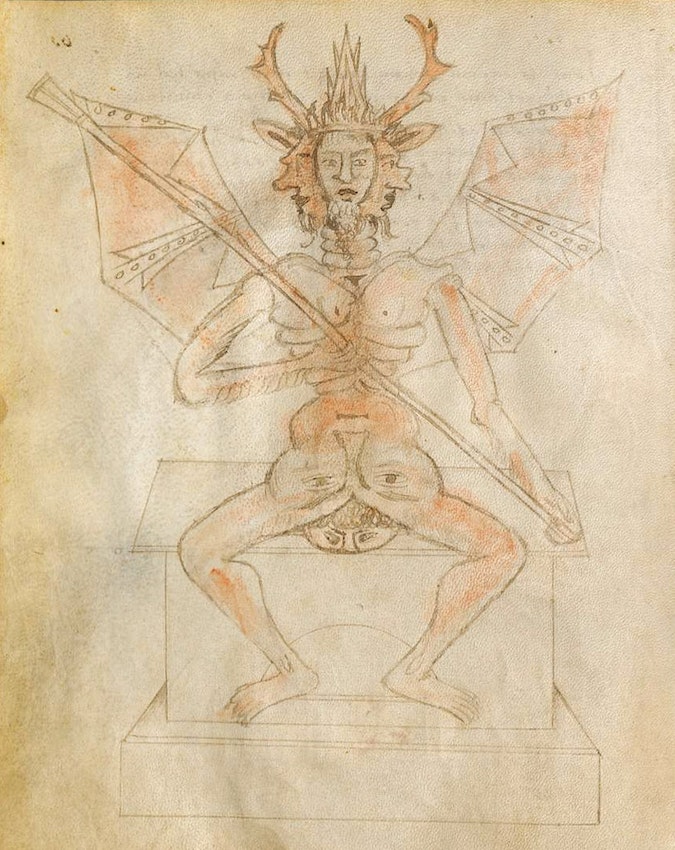 Sometimes we try to invent something new by exploring within the bounds of what is known to be possible, and sometimes we invent by expanding those limits. For an imaginative engineer in the early fifteenth century — working more than two hundred years before the discoveries of Newton — the process of invention would be often a curious mix of the two. You would know so little about mechanical force that you could conjure up almost anything and believe it to be practical. Of course, attempts to bring the designs to reality would often fail, but they might, on occasion, also succeed.

Suppose for a moment that you were such a person possessing a talent for gadgets in the early fifteenth century, or an engineer hoping to build marvelous machines and clever structures no one else had yet dreamed of — how would you go about showing your talents? And what if you were someone who wanted to own wonderful and mysterious devices, such as a prince — how would you find the person who could make these things? A remarkable testimony to this meeting of engineering skill, technological ignorance, individual initiative, and public demand can be found in the Bavarian State Library, in the sketchbook of an Italian inventor of the early fifteenth century. It is a volume of sixty-eight drawings advertising the inventions that Johannes (or Giovanni) de Fontana (ca. 1395–1455), who was both the engineer and the artist, hoped to sell to patrons. Thought to have been created sometime between 1415 and 1420, the work has no title by Fontana that has survived, but a later owner gave it the title Bellicorum instrumentorum liber — the Book of Warfare Devices — despite the fact that most of it does not concern military matters. 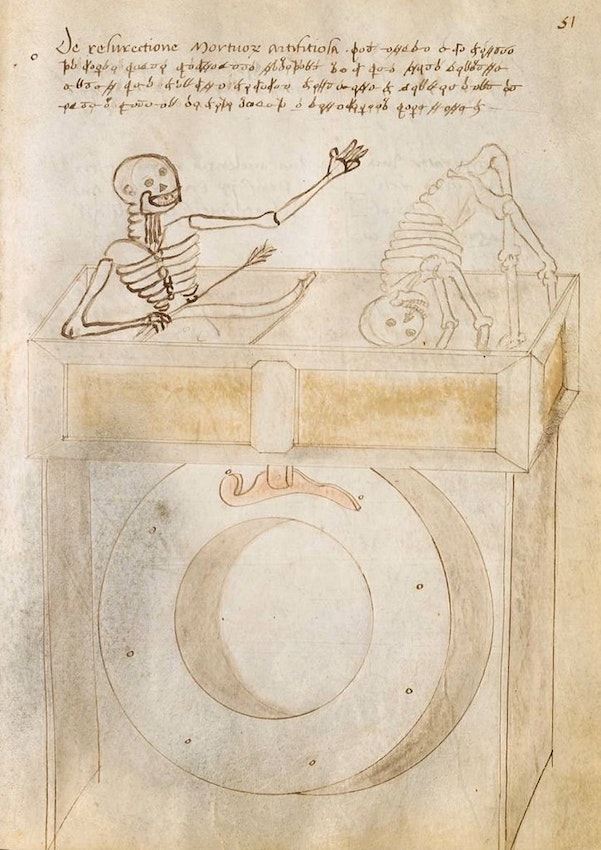 Fontana imagined a wide array of projects: mechanical camels for entertaining children, mysterious locks to guard treasure, flame-throwing contraptions to terrorize the defenders of besieged cities, huge fountains, musical instruments, actors’ masks, and many other wonders. One of the most remarkable features of his ideas is that many of them are impossible to execute: they simply do not conform to the principles of mechanics. This gives them great charm and makes them more interesting, perhaps, than his more rational or practical proposals. We see similar impractical designs in the very few other engineers’ books extant from this early period, most notably in the notebooks of Leonardo da Vinci. 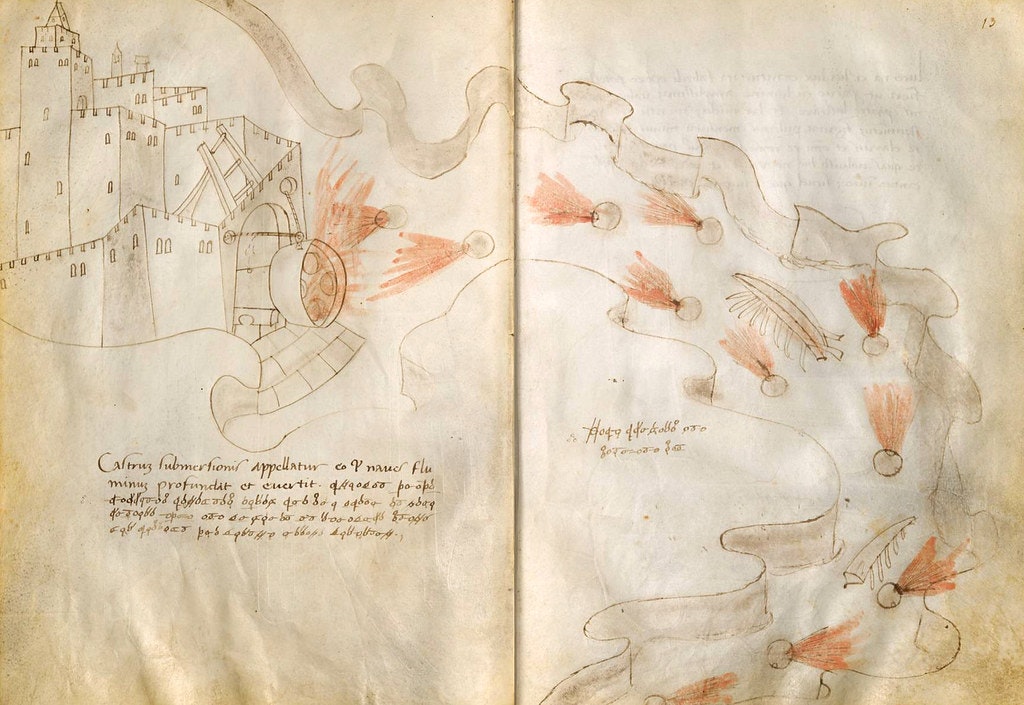 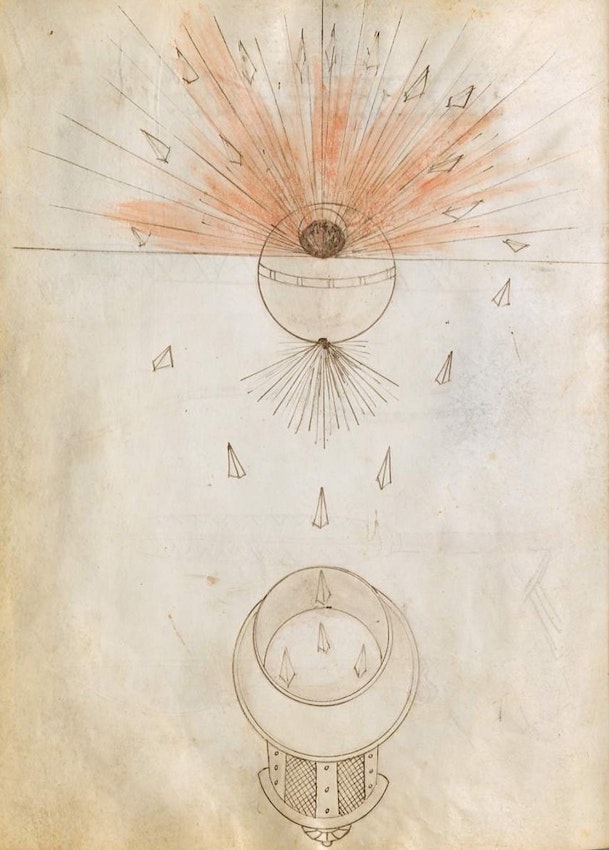 Fontana lived at the time of transition from medieval knowledge of the world to that of the Renaissance, which many now regard as the origin of early modern science. In the same years in which Fontana was working, drawing, and dreaming, other builders and engineers were inventing perspective. Goldsmiths along the Rhine and craftsmen in southwestern Germany and elsewhere were thinking about how to copy letterforms mechanically. Engravers in wood and metal were trying dozens of techniques, some lost to us today, for reproducing images. Engineers and tinkerers were learning how to build grander, lighter buildings and were experimenting with ways to defy gravity, to harness natural materials and forces, and to dominate nature. And they were learning new ways to envision their ideas on paper.

The towers and rockets, water and fire, nozzles and pipes, pulleys and ropes, gears and grapples, wheels and beams, and grids and spheres that were an engineer’s occupation at the dawn of the Renaissance fill Fontana’s sketchbook. His way of illustrating his ideas, however, is distinctly medieval, lacking perspective and using a limited array of angles for displaying machine works. He drew according to the methods practiced in the previous century, not those of the Italy of Alberti and Brunelleschi in which he lived. He used liberal splashes of ochre to animate his mechanical monsters and devils with the effects of fire. 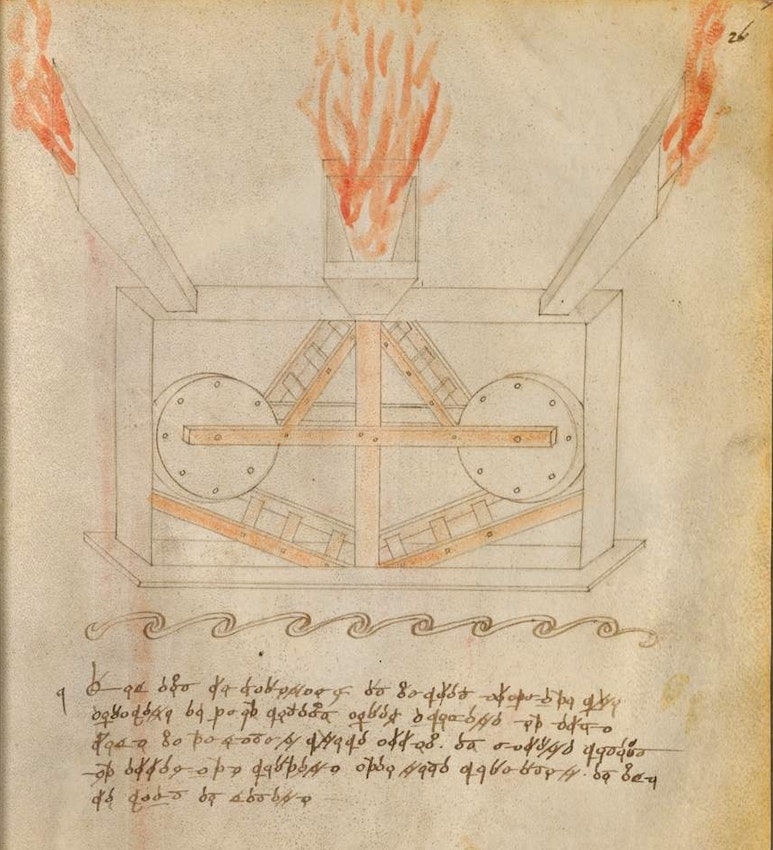 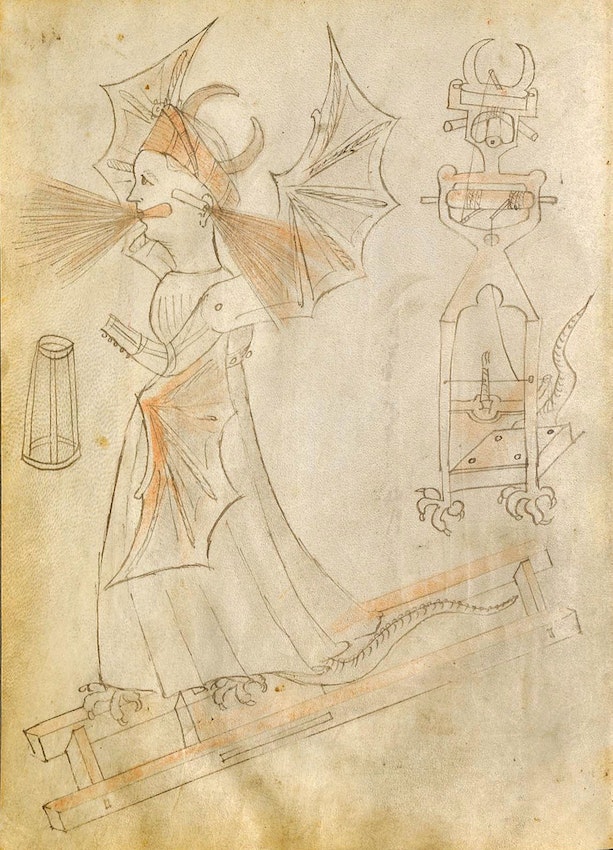 Fire had a less terrifying function in some of Fontana’s other designs, being used instead for its light-giving properties. In fact, Fontana made the earliest surviving drawing of a magic lantern device, which transformed the light of fire into emotive display. It is likely that he actually built such a thing, as his idea for it is specific and practicable. Perhaps one day some relic of it will turn up. 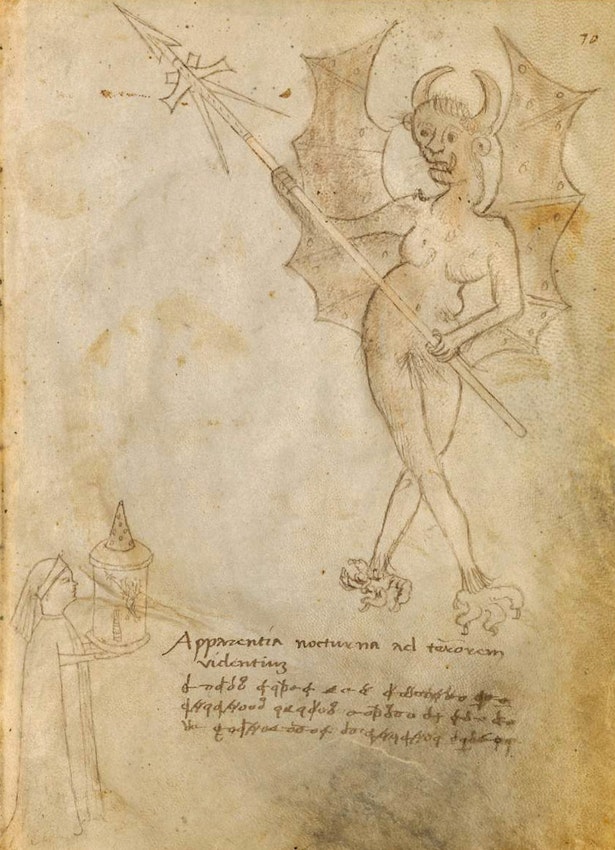 While many of the fire and light devices in Fontana’s designs were for the battlefield, others were envisaged as elaborate displays for use in spectacles such as religious plays. Performed in front of churches and cathedrals, the shows would draw large crowds seated on bleachers, built to look like battlements, all around the stage. Medieval playgoers loved to see hell-mouths, angels flying down on wires, and heavenly clouds lifted and lowered by ropes. 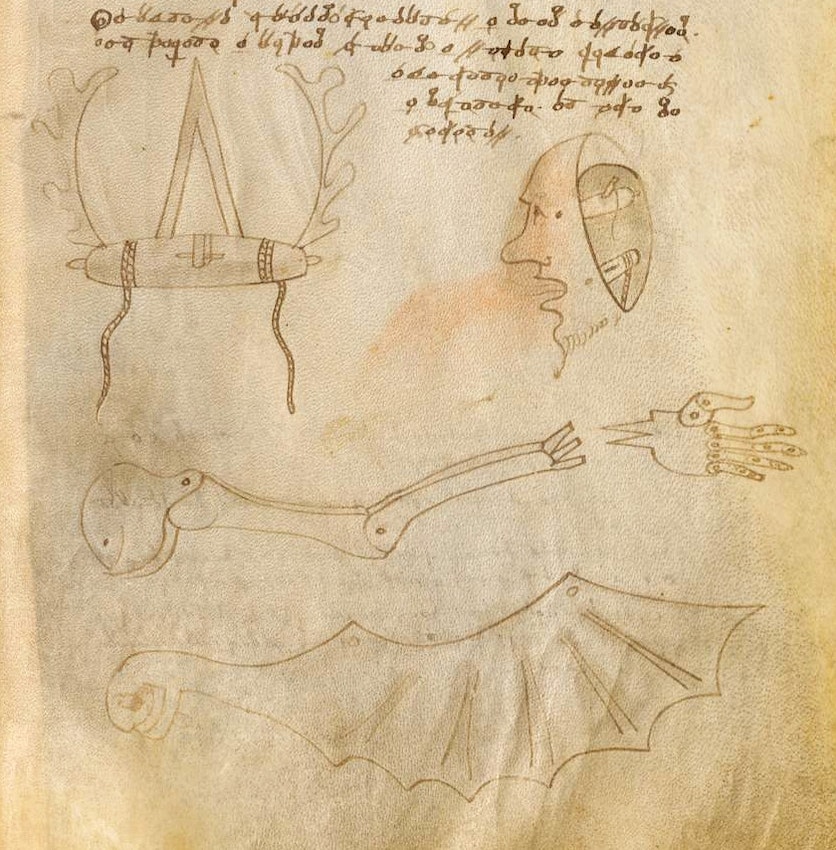 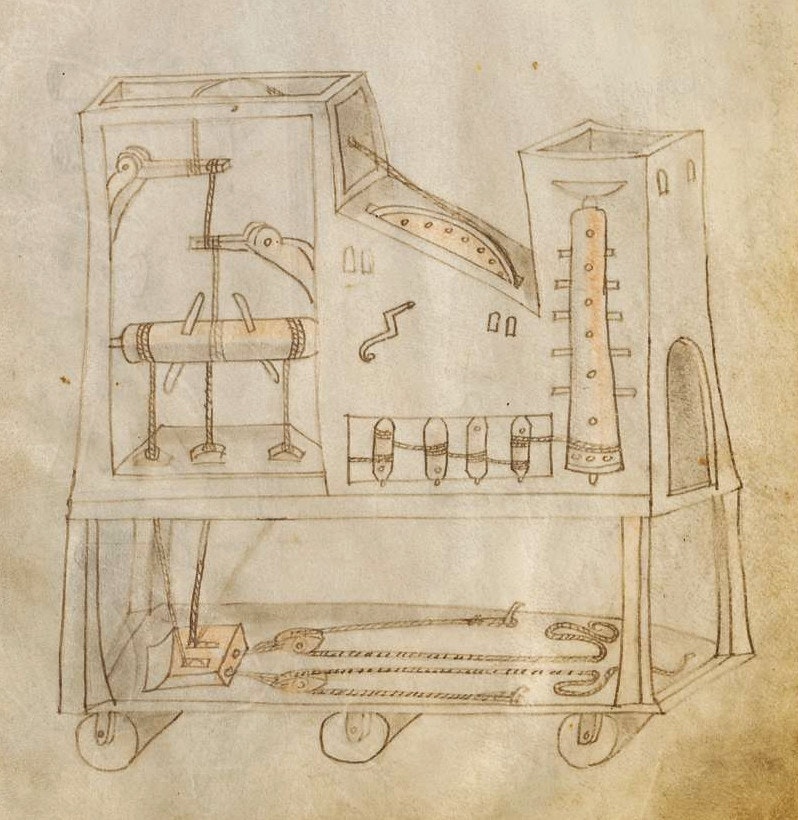 Perhaps Fontana’s most elaborate design was an awe-inspiring fire-illuminated spectacle, most likely serving as a propaganda machine, for use in war and in peace. 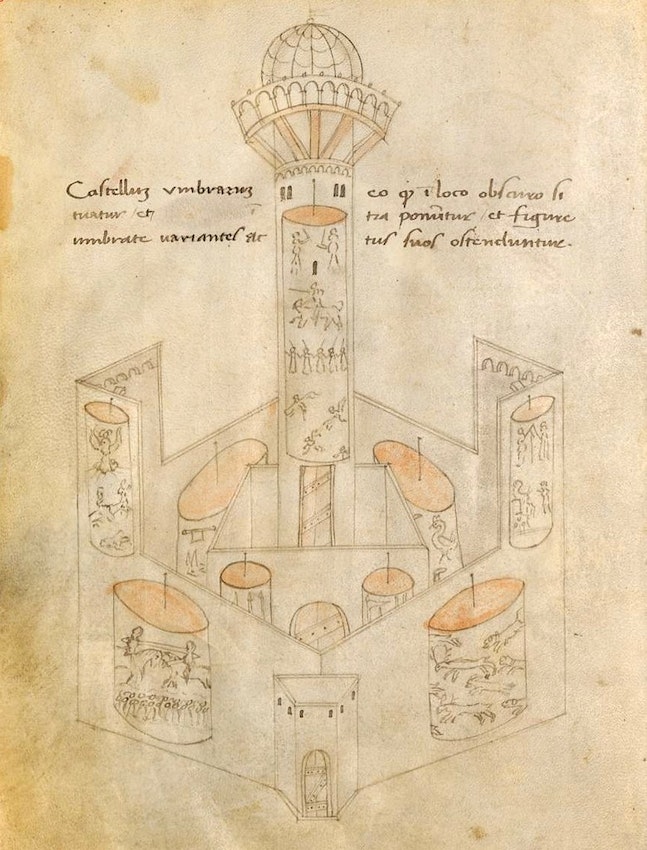 This fascinating idea draws on many of the arts of spectacle practiced in the late Middle Ages. Drawings on thin-beaten vellum turn in endless loops on spindles. A light source shining through the translucent medium projects shadows onto temporary walls overshadowed by a tower bearing mighty emblems. The visitor is led through a series of doors into the labyrinth of a fantastic world. The structure was most likely meant to stand as an enormous edifice that represented the personal abode of a prince or lord.

In addition to his fiery constructions, Fontana also designed many fountains and other hydraulic devices. Before modern water infrastructure, water sources were more visible in people’s lives than they are now. The importance of water and the fragility of its supply were not hidden by massive administrative schemes. Water was life, and it was danger, too. 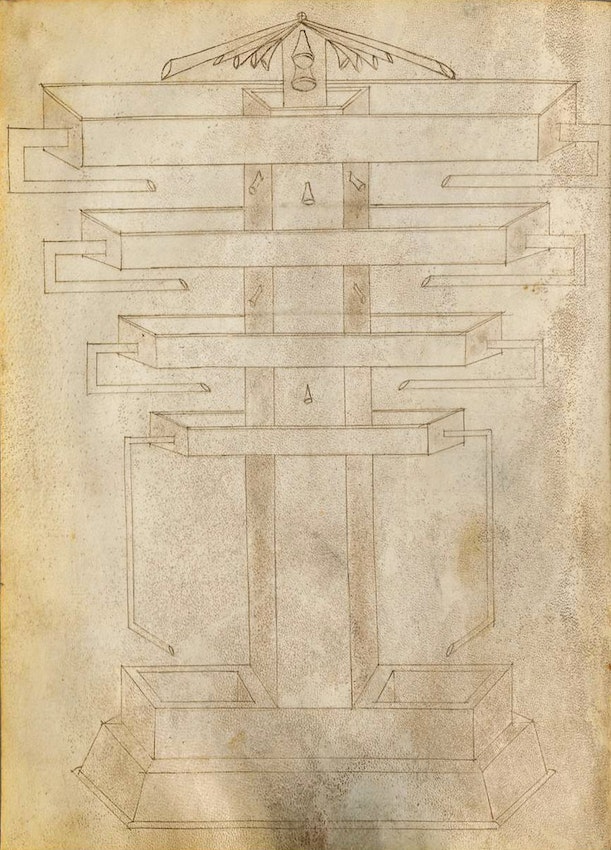 Here’s Fontana’s idea for lifting sunken ships — an urgent and vexing problem of the day. 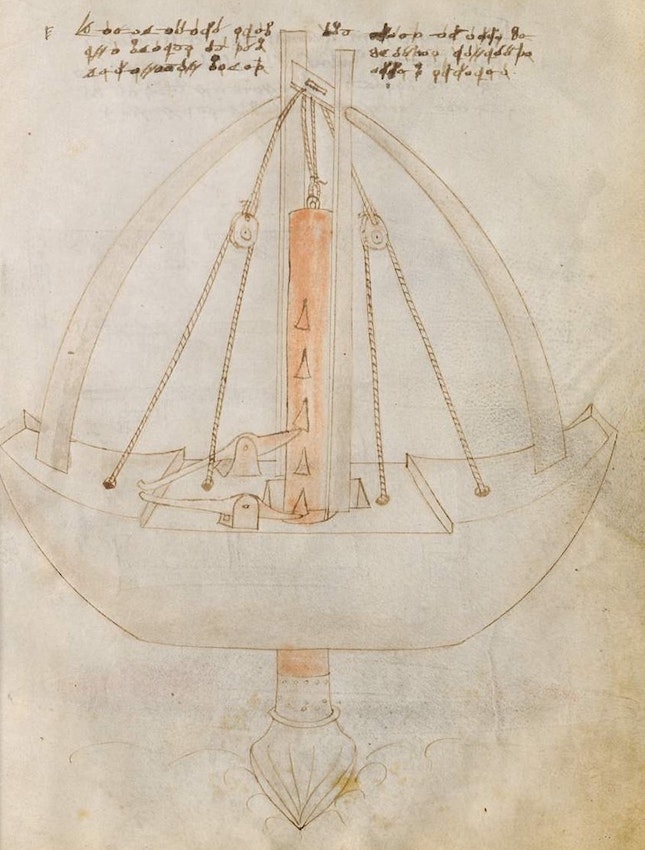 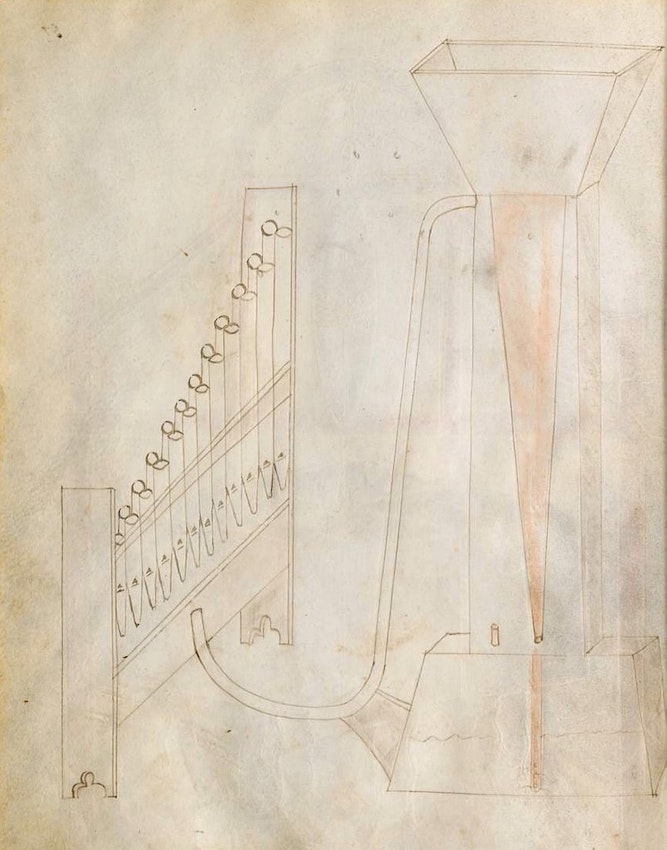 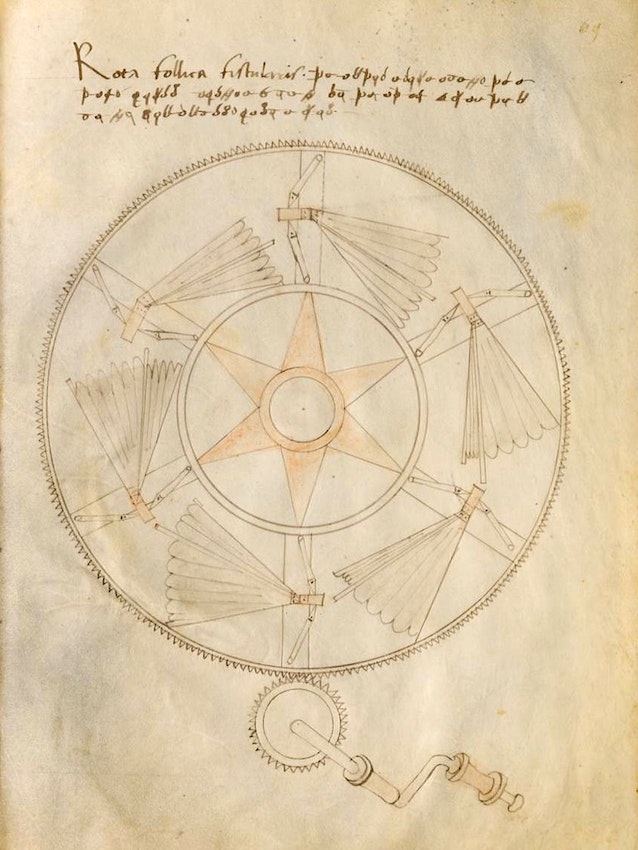 In one of the most curious drawings in the book, Fontana imagined a life support system for patients undergoing gruesome surgeries. 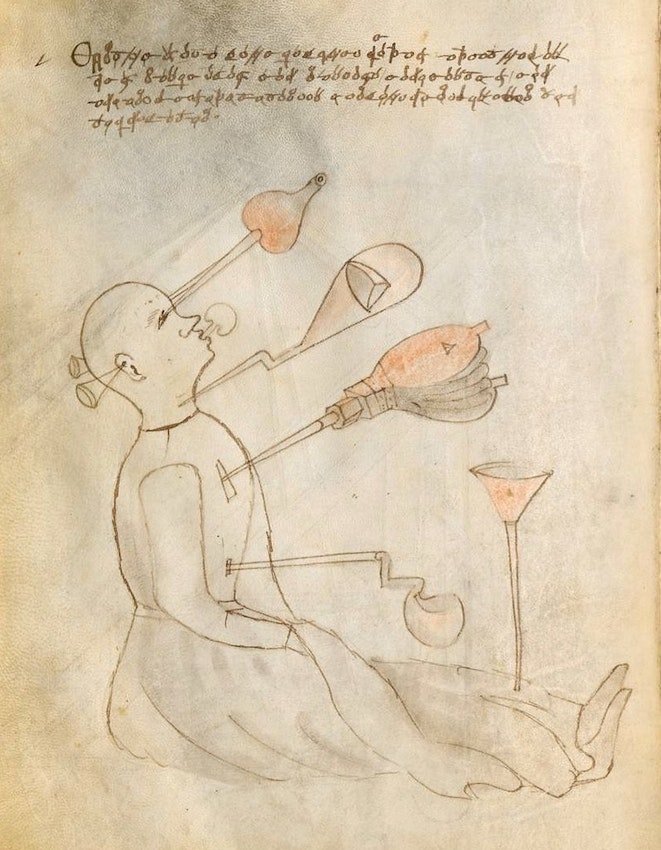 He also turned his imagination to more frivolous subjects and designed moving toys to entertain children. 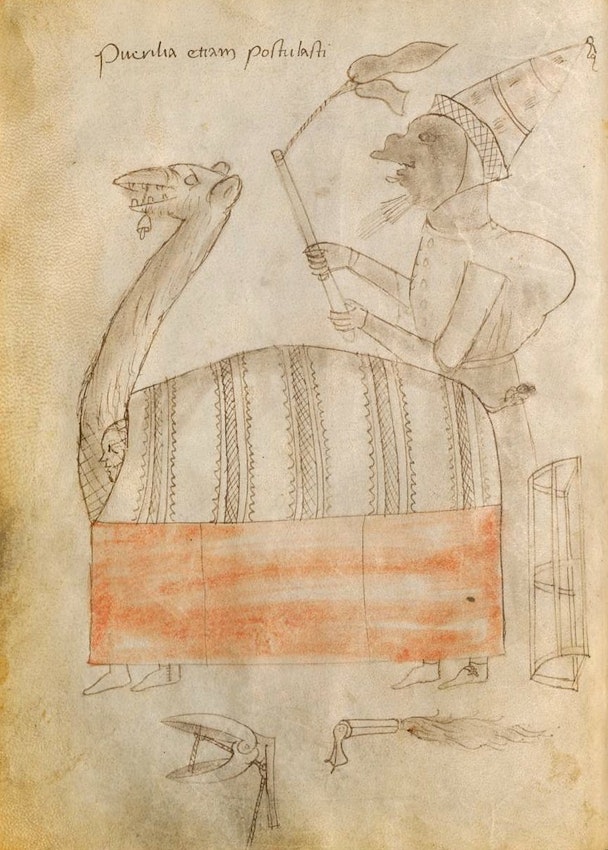 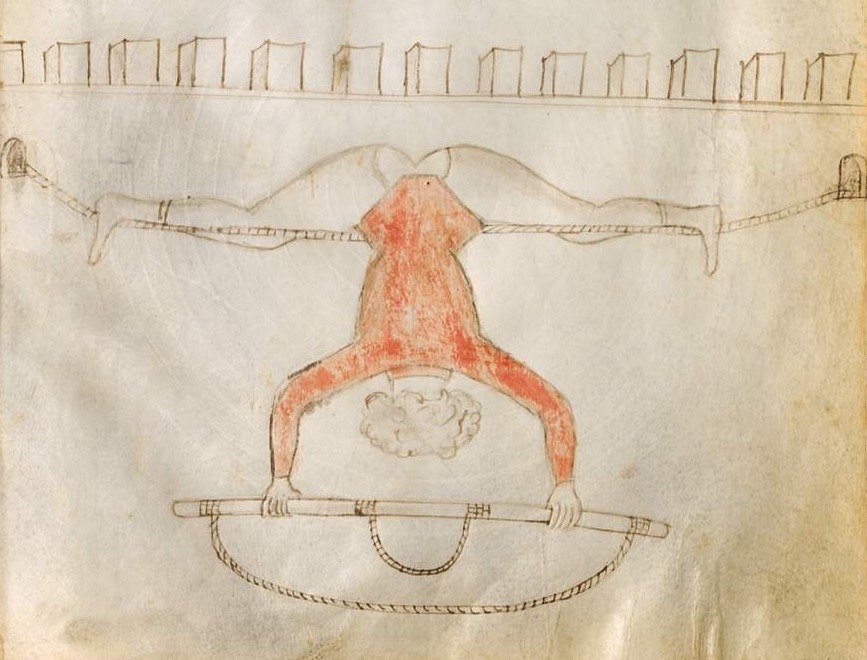 In general he was interested in developing flexible structures for entertainment and for civil engineering. He was particularly fascinated by locks and interlocking structures. 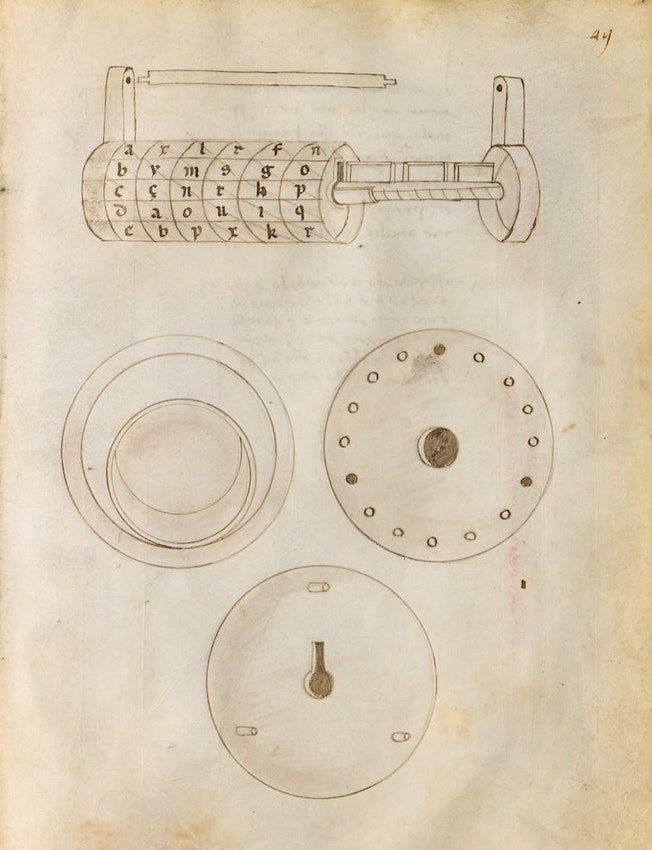 But there are quite a few drawings that are utterly puzzling. 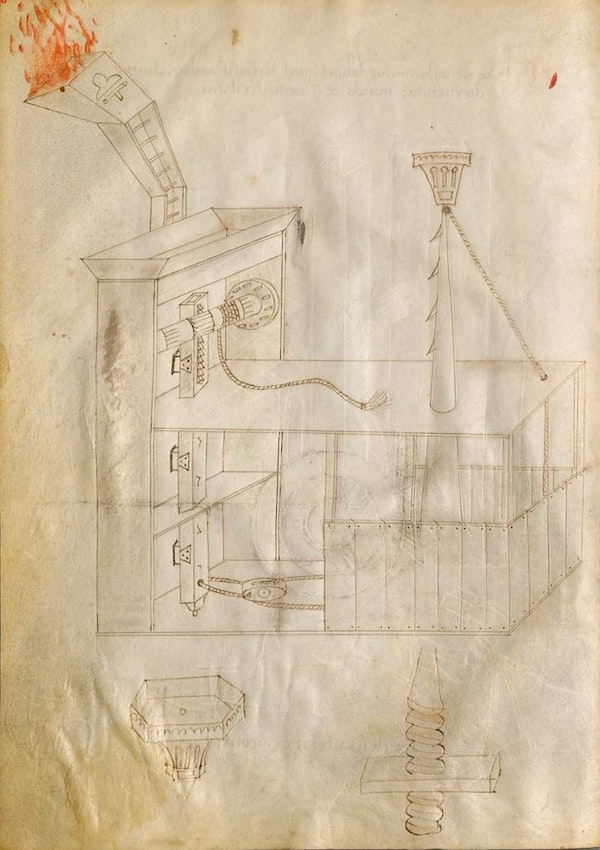 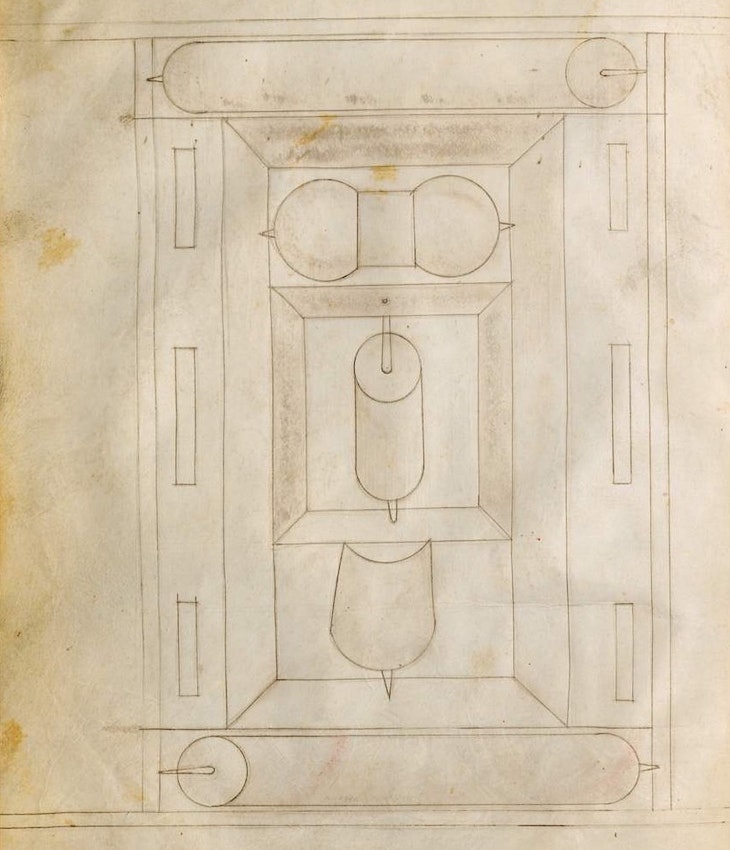 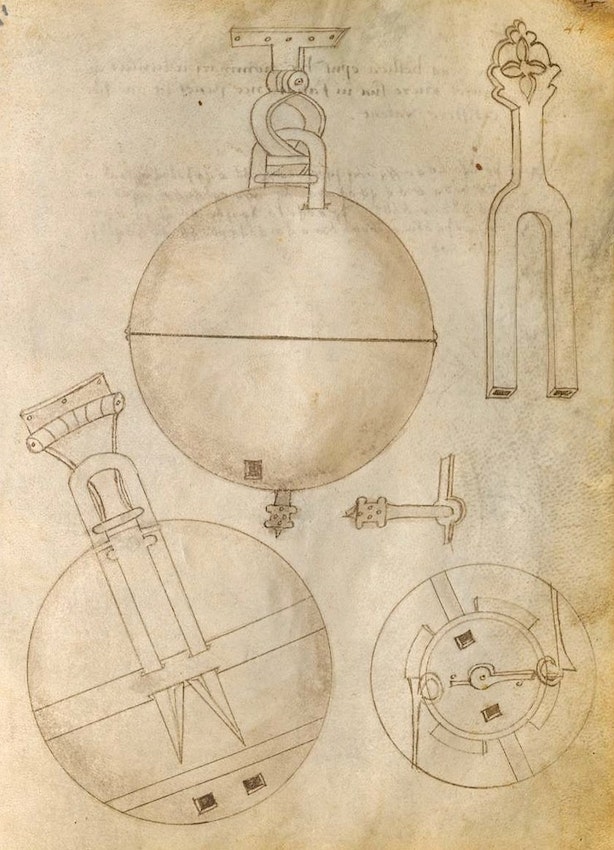 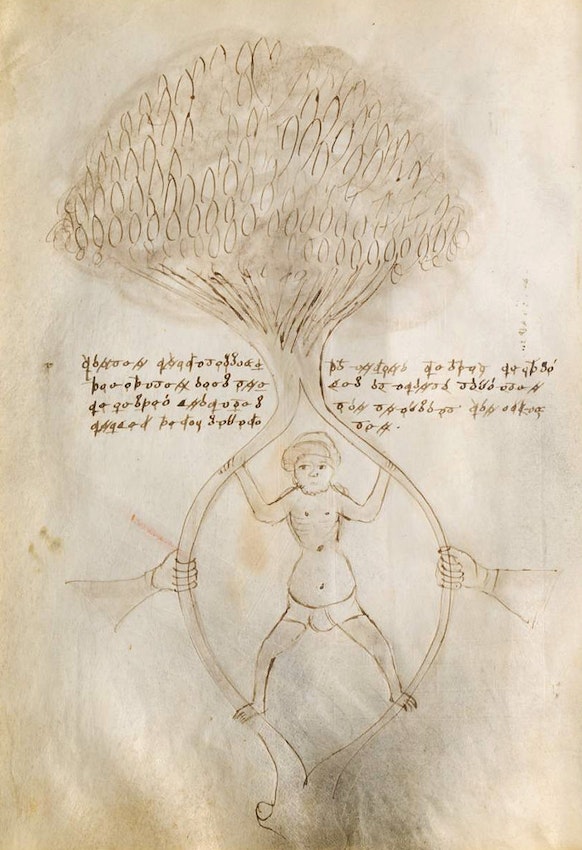 They use some of the forces and themes mentioned above — hydraulics, fire, and flexible or interlocking parts. But because cross section and other visual techniques such as perspective were not used by (and likely not known to) Fontana and perhaps also because his imagination exceeded his skills, what he meant to make and how he thought it was to be done remain something of a mystery. His captions, written in code, do not help much because they describe the function he intended them to perform rather than explain how they were actually constructed or operated.

This is just a sampling of the bounty of drawings found in Johannes de Fontana’s manuscript. Many of the others illustrate fierce siege engines and trebuchets, as well as handsome fountains and playful ornaments. Leafing through the pages we get a glimpse of what it was like to be an imaginative inventor right on the cusp of the Renaissance. He was resourceful and aspirational in ways people of every era would recognize and that we can see in ourselves. We may have more science than he had, but, like Fontana, we still show off our inventions to the wealthy and the powerful, currying their favor and seeking their financial support. War is as much a part of modern life as it was in Fontana’s day, with its ceaseless need for new inventions for murder and destruction. As unfamiliar as Fontana’s drawn line might be, he used his pen and brush for purposes very similar to ours when we draw and paint, write and speak, or imagine and hope: to find, somehow, the opportunity to build what we dream of creating.

Bennett Gilbert is an Instructor in interdisciplinary philosophy and history at Portland State University. He has written and published papers on various aspects of the history of ideas from antiquity to the present, with particular interests in the history of books and the history of communications. His work appears in the Journal of the Philosophy of History and is writing a forthcoming book on the philosophy of history. He is also working on the history of concepts of replication of texts and imagery.