The Memoirs of Joseph Grimaldi

Andrew McConnell Stott, author of The Pantomime Life of Joseph Grimaldi, introduces the life and memoirs of the most famous and celebrated of English clowns. 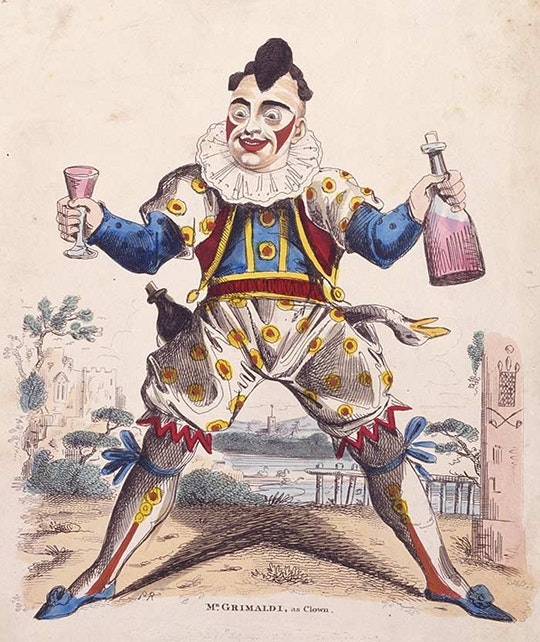 Few biographers have proved so reluctant, but when the raw materials that would become The Memoirs of Joseph Grimaldi reached Charles Dickens’ desk in the autumn of 1837, he was far from impressed. “I have thought the matter over, and looked it over, too,” he told his publisher, Richard Bentley, “it is very badly done, and so redolent of twaddle that I fear I cannot take it up on any conditions.”

What he saw had begun life as a sprawling manuscript of some 400 “childlike and simple” pages written by the pantomime clown, Joseph Grimaldi, in the course of his long retirement from the stage. When a publisher proved hard to find, Grimaldi contracted with a theatrical journalist, Thomas Egerton Wilks to help him revise the entire manuscript, but died before it was completed. Wilks sold the unfinished project on to Bentley, who considered Dickens perfect for the job – not only had he idolized Grimaldi as a child, fondly recalling trips to Covent Garden “to behold the splendour of Christmas Pantomimes and the humour of Joe,” but his own Sketches By Boz (1836) had been widely commended for displaying “the spirit of Grimaldi.”

Having finally relented, Dickens saw it off in a matter of weeks, subjecting it to “a double and most comprehensive process of abridgement,” resetting the narrative from the first person to the third, and not even bothering to write it down, preferring to dictate it to his father, who could be found “in exulted enjoyment of the office of amanuensis.”

Despite all its evident haste, The Memoirs of Joseph Grimaldi remains unmistakably “Dickensian,” recalling passages from Nicholas Nickleby, Hard Times and others. Without doubt, his most important decision was to place the biographical details of Grimaldi’s life within a strict economy of pleasure and pain that draws stark contrasts between the tinsel of the stage and the shabby reality of his many hardships. Laughter and misery becomes the balance-beam on which Grimaldi’s existence is constantly weighed as every career triumph is paid for with a proportionate personal agony, and every moment of joy countered by grief. 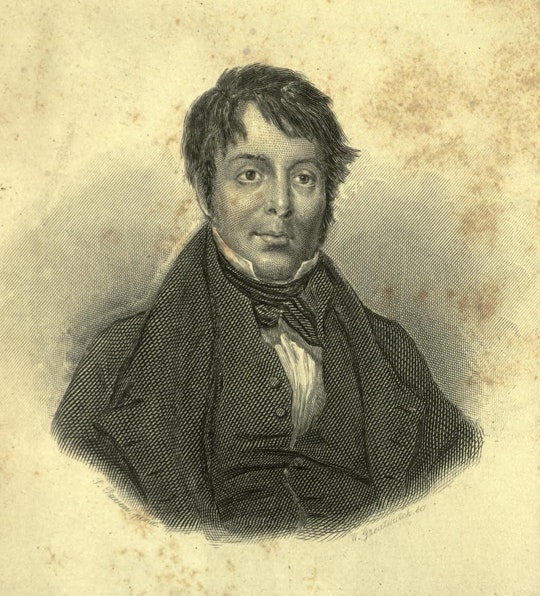 In presenting Grimaldi’s life in this way, Dickens was cementing much of what was popularly perceived during Grimaldi’s own lifetime. Born into a theatrical family in 1778, “Joe” was a superstar of Regency theatre who rose to national prominence in 1806 playing Clown in the pantomime of Harlequin and Mother Goose; or, the Golden Egg. His unique comic gifts had been honed since making his first appearance onstage at the age of two, tutored by his father, Giuseppe, a cruel and eccentric dancing master known throughout London’s close-knit theatrical community as the “Signor.” The Signor had fathered several children by different women – most of them young dancers indentured as his apprentices – but as his first boy, it was Joe on whom his future hopes were settled. The Signor’s methods of instruction were gruelling, as were the regular beatings and medieval punishments he inflicted on those that failed to meet his expectations, which included locking children into stocks, or throwing them into a cage and hoisting it into the flytower to leave them dangling precariously over the stage. Home life was little better, as the Signor was horribly morbid, living in perpetual fear of death, and especially of being buried alive. When he finally died in 1788, his will directed that his eldest daughter cut his head from his corpse just to be certain.

The Signor’s passing was a liberation, yet at age nine, Joe was suddenly the family’s principal breadwinner, and he spent the remainder of his childhood running between performances at Sadler’s Wells and Drury Lane theatres and appearing as a supernumerary in various pageants, spectacles, and crowd scenes, only graduating to pantomimes in his twenties. Regency pantomimes were markedly different from the entertainments that we know today, and were comprised of an opening that was usually based on a fairy tale, and a second, much longer performance, called the “harlequinade.” The openings usually involved a pair of star-crossed lovers forbidden to marry by a tyrannical parent, miming the action in their “big heads” – huge, caricatured papier mache masks – until they were magically transformed into the lead characters of the harlequinade, four figures instantly recognizable to every man woman and child in Regency Britain - the mercurial, acrobatic Harlequin; his gauzy, dove-like lover Columbine; and their enemies the elderly “libidinous, miserly Dotard,” Pantaloon, and his titular manservant, the “incorrigible emblem of gross sensuality,” Clown. What followed was a series of frenetic scenes in which Harlequin and Columbine were pursued through a series of lavish sets that could be magically transformed with a whack from Harlequin’s magic bat, which, primed with a pinch of gunpowder, was the original “slapstick.” The humour was crude and physical, but with its emphasis on transformation and the unexpected, it was the perfect entertainment for the age of revolutions. 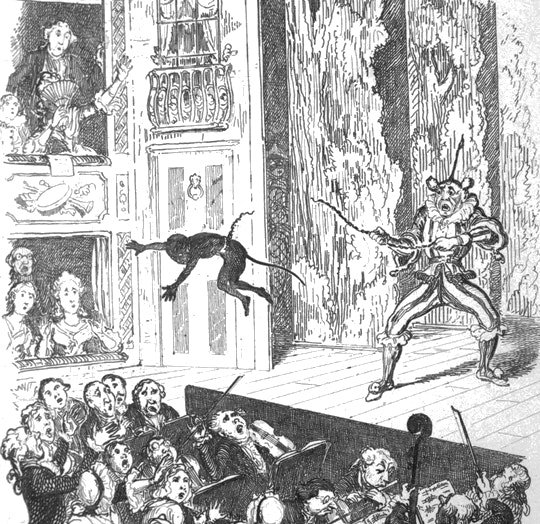 Aside from his comic talents and fine singing voice, Grimaldi was an innovator, widely acknowledged as the father of modern “slap and motley.” It was Grimaldi who overhauled the Clown’s appearance from the rustic booby that had remained more-or-less unaltered since the sixteenth century, to the heavily made-up and colourfully-attired clowns that we are familiar with today. The new make-up left not a centimetre of skin exposed – not even in the nostrils or inside of the lips – and, as such, it implied a much stricter division between the man and the mask, an impenetrability that acted as a kind of invitation to speculate about what they might have concealed. Was there, perhaps, a division in Grimaldi himself? Rumours to this effect arose during the initial success of Mother Goose: the King of Clowns, it was reported, was subject to debilitating bouts of offstage depression, reports he himself chose to confirm with a punning quip, “I am GRIM ALL DAY, but I make you laugh at night.” A series of anecdotes followed that prefigured Dickens’ biographical portrait in black-and-white, the most famous of which dates from the 1820s and involves a visit to the surgeon, John Abertheny. Grimaldi, hoping to find a cure for his depression, asks Abertheny for advice, and unaware of his client’s identity, the surgeon prescribes the diversions of “relaxation and amusement”:

“But where shall I find what you require?” said the patient.

“In genial companionship,” was the reply; “perhaps sometimes at the theatre; - go and see Grimaldi.”

“Alas!” replied the patient, “that is of no avail to me; I am Grimaldi.” 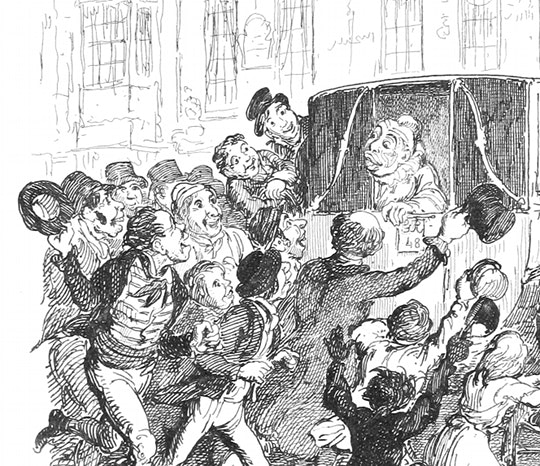 Clowning also made extraordinary physical demands, and as early as 1813, The Times was already expressing misgivings about the sustainability of his performances: “It is absolutely surprising,” it wrote, “that any human head or hide can resist the rough trials which he volunteers. Serious tumbles from serious heights, innumerable kicks, and incessant beatings, come on him as matters of common occurrence, and leave him every night fresh and free for the next night’s flagellation.” Sure enough, Joe’s health worsened with each passing season until reaching a point where he had to be carried to his dressing room and revived after each performance. Laughter demands an exorbitant prince. “Poor Joe!” wrote the author William Robson, “it was like the boys and frogs; it was sport to us, but death to you.”

Grimaldi was 45 when he gave his last regular performance. This was young – his father had continued well into his seventies – but by 1823, he was suffering so badly from arthritis and various digestive complaints that it was impossible to continue. He would reappear two years later at a pair of gala performances to celebrate his career, but made his contributions seated in a chair. With the retirement of its greatest exponent, pantomime quickly entered a period of decline, as the slapstick antics of the harlequinade were replaced with bloated stage effects and meaningless scenery. As Grimaldi approached the end of his life, his battered old body became a symbol for the exhaustion of Regency popular culture, and by extension, the lost youth of Dickens’ generation. Dickens had already conveyed as much in “The Stroller’s Tale,” one of the first instalments of The Posthumous Papers of the Pickwick Club (1835). Here, “Dismal Jemmy,” himself a down-at-heel actor, recalls the time he comes across a fellow performer, a “enfeebled by dissipation and emaciated by disease.” It is night and the theatre is dark. “I was dressed to leave the house,” Jemmy recalls,

and was crossing the stage on my way out, when he tapped me on the shoulder. Never shall I forget the repulsive sight that met my eye when I turned round. He was dressed for the pantomime, in all the absurdity a clown’s costume. The spectral figures in the Dance of Death, the most frightful shapes that the ablest painter ever portrayed on canvas, never presented an appearance half so ghastly. His bloated body and shrunken legs – their deformity enhanced a hundred fold by the fantastic dress – the glassy eyes, contrasting fearfully with the thick white paint with which the face was besmeared: the grotesquely-ornamented head, trembling with paralysis, and the long skinny hands, rubbed with white chalk – all gave him a hideous and unnatural appearance of which no description could convey an adequate idea, and which, to this day, I shudder to think of. 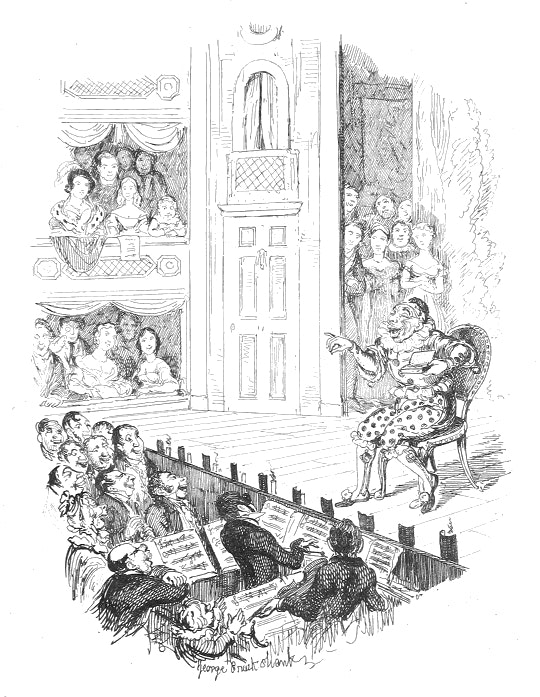 Andrew McConnell Stott is the author of Comedy (Routledge, 2005; 2nd edn, 2014) and The Pantomime Life of Joseph Grimaldi (Canongate, 2009), which won the Royal Society of Literature Jerwood Prize for Non-Fiction and was named as one of the Guardian's "Books of the Year" for 2010. In 2013 he published The Poet and the Vampyre: The Curse of Byron and the Birth of Literature's Greatest Monsters (Canongate/Pegasus 2013), which was a best book pick of 2013 for both The Big Issue and The Sunday Times.