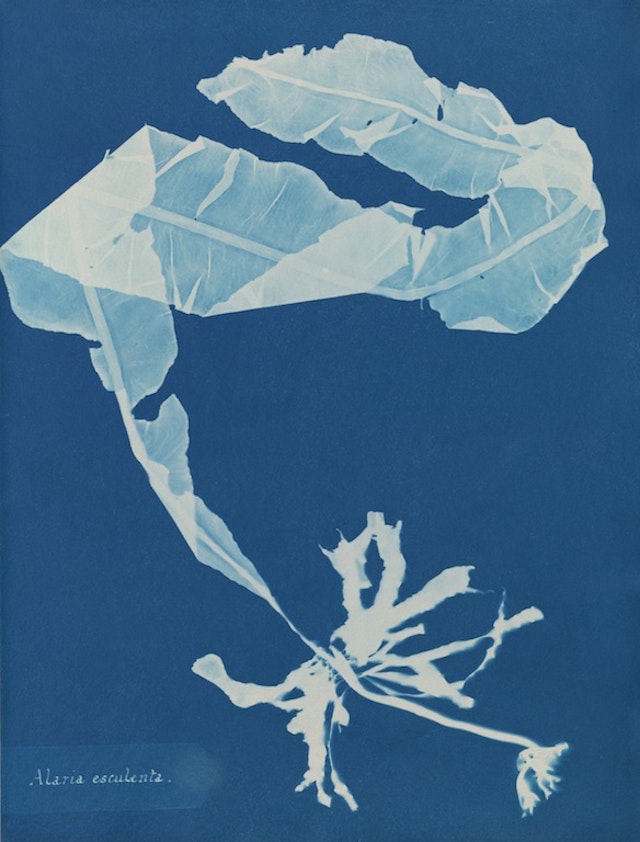 One of the many cyanotypes (or "sunprints") that make up Photographs of British Algae: Cyanotype Impressions (1843) by Anna Atkins, an English botanist and, some argue, the very first female photographer, most noted for using photography in her books on various plants. Having grown up with her father John George Children (a chemist, mineralogist, and not too successful zoologist) Atkins was surrounded by science and also contributed to her father's work. Through her father and her husband, Atkins came to know both William Henry Fox Talbot, a pioneer of early photography who invented a process of creating photographs on paper treated with salt and a solution of silver nitrate, and Sir John Herschel, the inventor of the cyanotype printing method. She became interested in the cyanotype process which produced images through so-called sun-printing. The object is placed on paper which has been treated with ferric ammonium citrate and potassium ferricyanide, after which it is exposed to sunlight and then washed in water, leading to the uncovered areas of the paper turning a dark blue. The process, known as blueprinting, was later used to reproduce architectural and engineering drawings, but Atkins chose to use it for what is considered to be the first work with photographic illustrations, namely her Photographs of British Algae: Cyanotype Impressions (1843). Only 13 copies of the handwritten book are known to exist, some of which are in various stages of completion. Later, she would collaborate with another female botanist, Anne Dixon (1799 - 1864), in making two more books featuring cyanotypes: Cyanotypes of British and Foreign Ferns (1853) and Cyanotypes of British and Foreign Flowering Plants and Ferns (1854). Atkins became a member of the Botanical Society in London in 1839, one of the few scientific societies which was open to women. (Image source: New York Public Library)