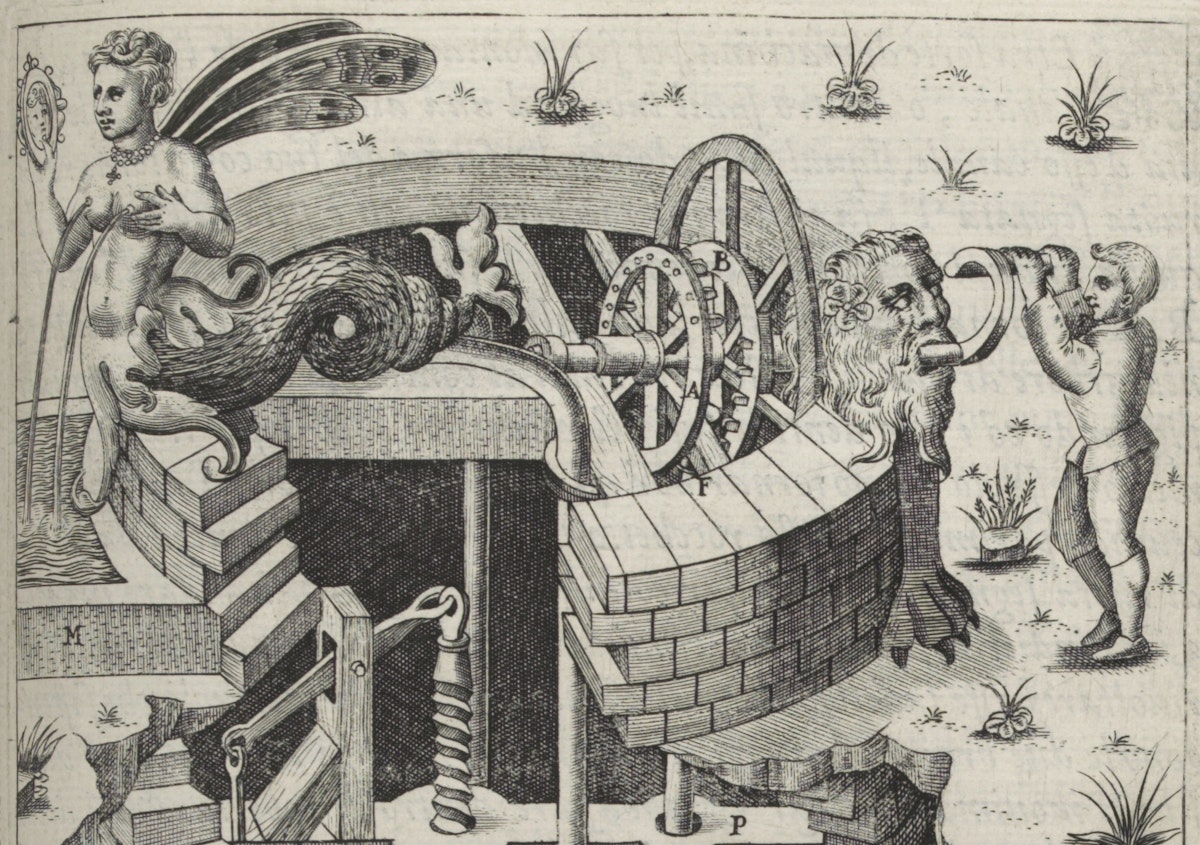 Instead of an e-reader, picture your favorite books on a portable Ferris wheel, a lazy susan of knowledge and imagination turned on its side. Supplement your jogging habit with a treadmill that literally mills, converting caloric expenditure into bread flour. Or flip another page to find: bandsaws and bellows powered by rivers; ecological cofferdams; and a fountain that uses hydrostatic pressure to sing the songs of birds, beckoning nightingales to preen beneath its spouting showers.

If this sounds like an Arcadian vision of the future, it is a future from the past. Agostino Ramelli’s 1588 Le diverse et artificiose machine (Diverse and artificial machines) features these devices (and about two hundred others) in an intricately illustrated volume. Published in Paris as a bilingual edition dedicated to King Henri III, the French and Italian tome has as much in common with literary texts as mechanical manuals. Ramelli’s designs gain their value not from practicality and efficiency (few were ever built), but from “classical gravitas”, visual imitations of the antiquity that Renaissance scholars and artists were busy rediscovering and, in turn, inventing.

A Catholic soldier who developed his mechanical prowess in the military, Ramelli trained with the Marquis of Marignano before moving to France to fight against the Huguenots. Equally devoted to mathematics and war, Ramelli included in his book what Witold Rybczysnki describes, in his history of screws and screwdrivers, as “a number of siege engines, cunning pontoon bridges that unfold like accordions, scaling machines, and monstrous catapults.” But Ramelli directs the most energy to the peaceful manipulation of water: dozens of devices for raising, diverting, and channeling aquatic bodies.

Despite the complex detail with which Ramelli draws and describes his inventions, the illustrations obscure as much as they reveal, evincing what Jonathan Sawday calls Renaissance writers’ “general love of concealment, hidden revelation, and secrecy”. Ramelli had good reason for not tipping his hand. In the introduction, his pen turns poisonous when describing how other inventors had “furtively robbed me of my special drawings”. While perhaps the most famous of his time, Ramelli was not the only Renaissance machinist. Aspects of his book resemble and influenced works by Giovanni Branca, Jacopo Strada, Vittorio Zonca, and Michelangelo. 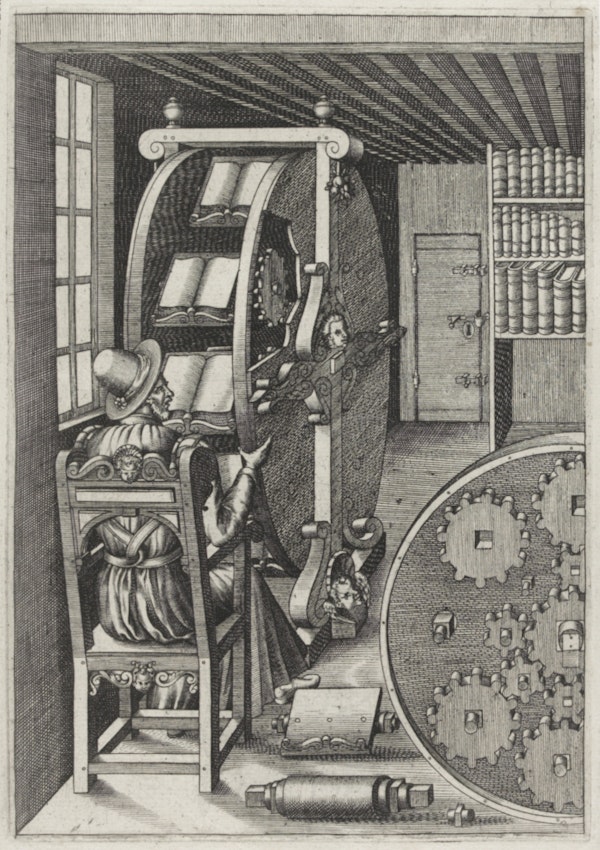 Most prescient, perhaps, was his book wheel, which Megan Garber has called “the Kindle of the 16th century”. Borrowing the epicyclic gearing mechanism from astronomical clocks, Ramelli envisioned the machine to be of use to “anyone who takes pleasure in study, especially those who are indisposed and tormented by gout.” More impressive than its workings was the circular form — which some read as an anticipation of how printed and digital texts came to circulate globally — and its system of shelves, which work almost like web-browser tabs. Curiously, the revolving reader might be indebted to Chinese innovation, where similar machines appear in Buddhist temples during the sixth century. Joseph Needham, for example, believes that a description of rotating Ming “kiosques” found its way to Europe via Shah Rukh, son of Timur. Today, Ramelli’s device still retains fans: Anthony Grafton, Professor of History at Princeton University, supposedly has one in his office, and students at Rochester Institute of Technology built a historically-accurate replica in 2019 based on Ramelli’s drawings.