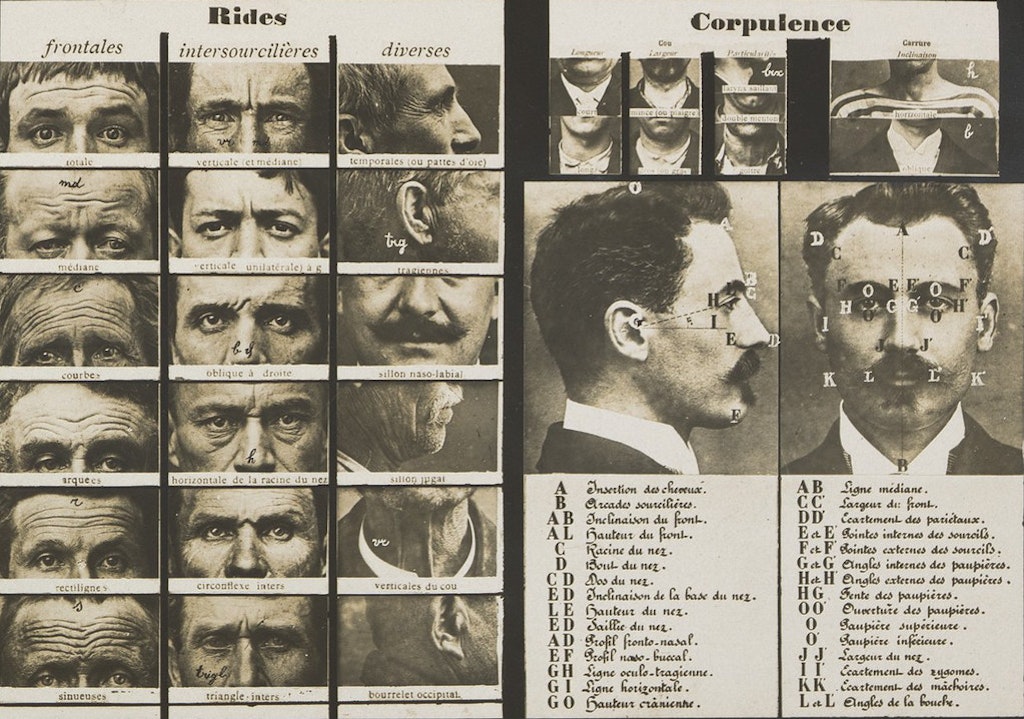 Alphonse Bertillon's Tableau synoptic des traits physionomiques was essentially a cheat sheet to help police clerks put into practice his pioneering method for classifying and archiving the images (and accompanying details) of repeat offenders, a system known as bertillonage. Beginning his career as a records clerk in the Parisian police department, Bertillon, the child of two statisticians and endowed with an obsessive love of order, soon became exasperated with the chaos of the files on offenders. The problem was particularly acute when it came to identifying offenders as repeat offenders (recidivists), given that the person in question could simply provide a false name. Before Bertillon, to find the files of the accused (or if there was even one already existing) the police would have to sift through the notorious "rogues' gallery", a disorganised mess of photographic portraits of past offenders, and hope for a visual match.

Bertillon's solution was to develop a rigorous system of classification, or "signalment", to help organise these photographs. This involved — in addition to taking simple measurements of the head, body, and extremities — breaking down the criminal's physiognomy into discrete and classifiable elements (the curl of ear, fold of brow, inclination of chin). What in other contexts might be the much loved (or reviled) expressions of a personality, in Bertillon's world become simply units of information. Taking a note of these, as well as individual markings such as scars or tattoos, and personality characteristics, Bertillon could produce a composite formula that could then be tied to a photographic portrait and name, all displayed on a single card, a portrait parlé (a speaking portrait). These cards were then systematically archived and cross-indexed, to make the task of linking a reticent offender with a possible criminal past, infinitely easier. Put into practise in 1883, the system was hugely effective and was soon adopted by police forces across the channel, before spreading throughout Europe and the Americas, (though without Bertillon's obsessive eye overseeing proceedings, its foreign adventures were not a complete success).

Key to the whole endeavour, of course, was the new exactitude of representation afforded by photography, though this was still an exactitude limited to a particular moment. Over time faces change, a fact which rendered Bertillon's system less than perfect. With the call for an identifier more fixed than the measurements of an inevitably changing face, and a system less complex, bertillonage was eventually, by the beginning of the 20th century, supplanted by the new kid on the forensic science block — fingerprinting.

The at once wonderful and somewhat terrifying image featured here, though rendered obsolete in a practical sense, stands today as a potent symbol for the new age of surveillance and "biopower" which it helped to usher in. As the Met Museum, where this copy of Bertillon's image is housed, comments, "although intended merely as a filing aide, this image of the human face in all its striations of repetition and difference renders surveillance as a terrifying manifestation of the modern sublime."