When James Joyce — who named his daughter “Lucia” after the patron saint of eyesight, hoping for intercession from his degenerating vision — met Marcel Proust in May, 1922, at a Parisian hotel, he chalked up the awkward encounter to the French novelist’s nocturnal lifestyle. “Of course the situation was impossible. Proust’s day was just beginning. Mine was at an end.”

Almost two centuries earlier, the Enlightenment philosopher Denis Diderot visited Puiseaux, just south of Paris, to meet a person “of good solid sense” who had been born blind. Arriving at five in the afternoon, he finds the man amid his morning routine. “He had only been up for an hour, for I must tell you the day begins for him when it is ending for us.” Despite the man’s lack of sight and preference for midnight oil, Diderot discovers that the situation is far from “impossible”: they have a conversation about the world of sight and his host exhibits a sophisticated understanding of optics, describing a mirror, for example, as an object that “sets things in relief at a distance from themselves”. Diderot is delighted. “Had Descartes been born blind”, effuses the philosopher, “he might, I think, have hugged himself for such a definition.”

When Diderot wrote his Lettre sur les aveugles (translated into English as Letter on the Blind for the Use of Those Who See), in which this story appears, blindness had become a topic of philosophical debate. As Mark Paterson notes in Seeing with the Hands, after René Descartes published his essay on optics, La dioptrique (1637), blindness promised to reveal “the relationship between visual clarity and epistemological certainty”. Many treatises on the nature of knowledge, for instance, contemplated those born blind (l’aveugle-né), whose vision was restored later in life. In a thought experiment proffered by William Molyneux and later taken up by John Locke in An Essay Concerning Human Understanding (1689), a person born blind learns the tactile difference between a cube and sphere. After sight is magically restored, they encounter the two geometric forms on a table. Without touching the solid objects, would they be able to tell which is which?

If this hypothetical seems fanciful in retrospect, it was important for one of the most controversial debates of the Enlightenment: is knowledge rational or empirical? That is, do we have an implicit, conceptual, and perhaps God-given sense of the world? Or is it derived from raw observation, whether visual or haptic? In this period, blindness also challenged what the intellectual historian Martin Jay calls the scopic regimes of modernity: those layered metaphors, in Western philosophical history, that equate knowledge and vision. Terms like insight and enlightenment preserve the primal scene from Plato’s cave allegory, where truth or “the good” is represented by the sun, toward which we must continually strive. Yet medical progress migrated these questions away from the world of allegory and onto the mid-eighteenth-century operating table. Diderot was writing during an era when, thanks to advances in cataract surgery, these questions could be tested via a scientific method. 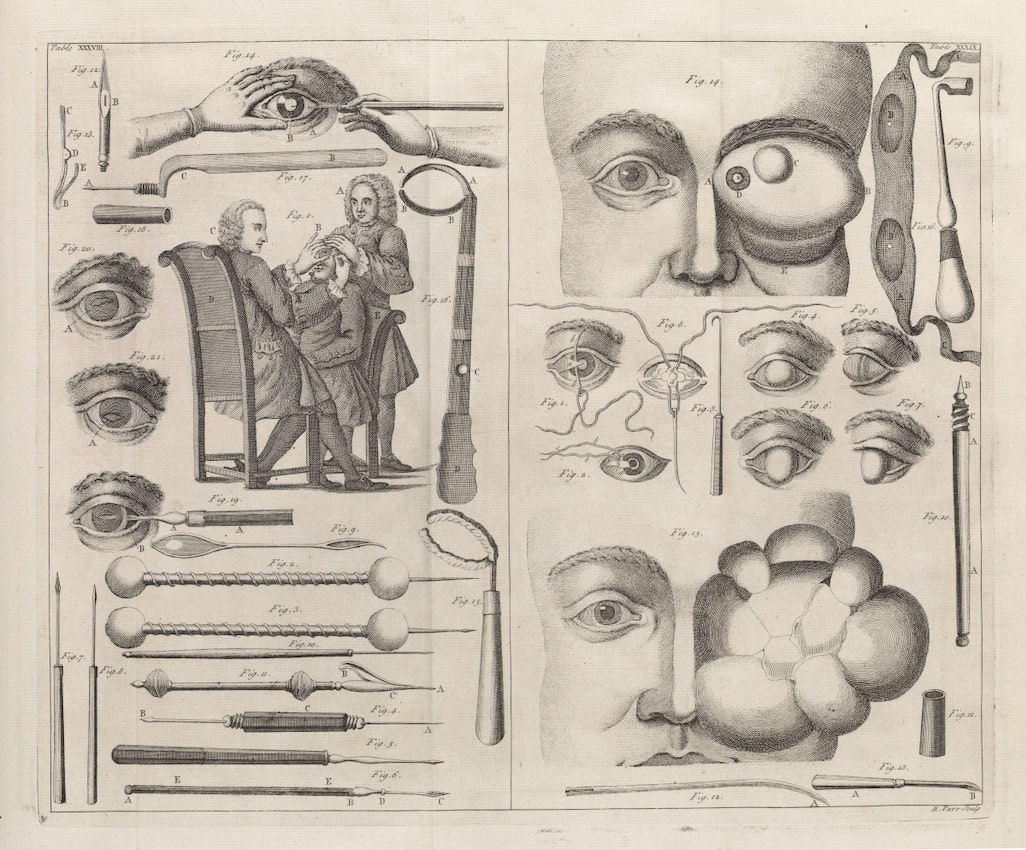 Surgeon and assistant performing cataract surgery on a patient and various surgical instruments, Table XXXVIII-XXXIX from A Medicinal Dictionary (1743-45) — Source.

Philosophical discussions of blindness often feature hypothetical, abstract subjects in the place of real people, an optical equivalent to the Enlightenment's fascination with the idea of feral children, raised in isolation from human language and society. Diderot, however, did things differently, for he wrote about actual blind people, whom he interviewed at length — “he is at pains to include details about [his subject’s] family background, education, and household arrangements in order to create a complex image of a living human being rather than a mere abstraction”, writes the scholar Georgina Kleege.

Akin to the epistolary novels that became popular in the 1740s, Diderot’s Letter on the Blind assumes the form of a real letter, penned, it seems, to his occasional lover: Madeleine d'Arsant de Puisieux, author of La femme n'est pas inférieure à l'homme (Woman is not inferior to man), an early feminist treatise. While his correspondent was combating patriarchy, Diderot voiced probing challenges to ableism, by quoting the man from Puiseaux’s response, at length, when asked if would like to have his vision restored:

“If it were not for curiosity,” he replied, “I would just as soon have long arms: it seems to me my hands would tell me more of what goes on in the moon than your eyes or your telescopes. . . I would be as well off if I perfected the organ I possess, as if I obtained the organ which I am deprived of.”

In the spirit of perfecting touch, Diderot segues into an extended discussion of Nicholas Saunderson’s system of “palpable arithmetic”, a precursor to night writing and Braille. Saunderson, who held the Lucasian Professorship of Mathematics at Cambridge, was blinded by smallpox in infancy and remains a largely forgotten though brilliant figure, who astounded students with cutting-edge lectures on light and color, had a love for hunting on horseback, and would supposedly offer detailed commentary on the cloud formations that passed between him and the sun during afternoon turns in the park. 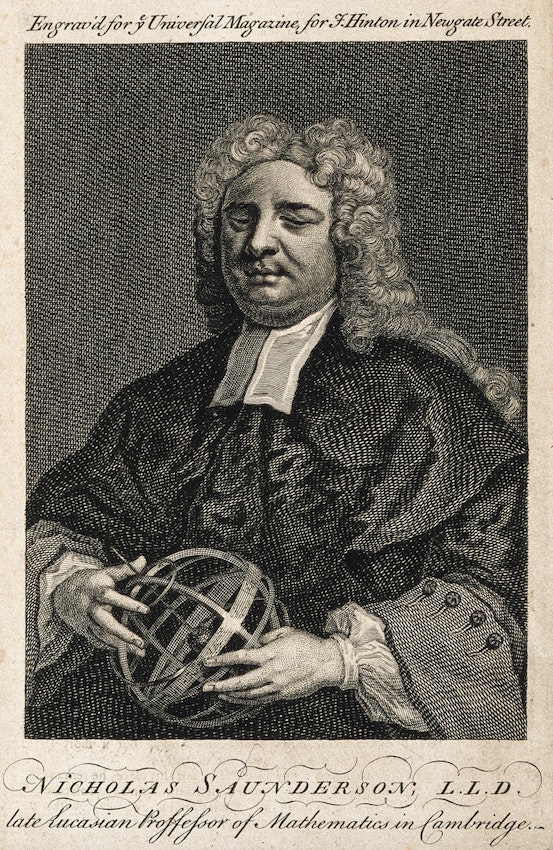 Despite his relatively complex and compassionate treatment of the blind, Diderot had an agenda of his own. He interlaced his letter with quiet defenses of atheism, often funneled through quotations from Saunderson, by championing the empirical, scientific method over "religiously tinged rationalism”. The letter concludes with a humorous sigh of defeat, a subtle condemnation of those who claim to know the workings of things in heaven and earth:

Thus we scarce know anything, yet what numbers of books there are whose authors have all pretended to knowledge! I cannot think why the world is not tired of reading so much and learning nothing, unless it be for the very same reason that I have been talking to you for two hours, without being tired and without telling you anything.

A few months after Diderot published the letter anonymously, he was arrested for his godless tone and imprisoned in Vincennes for three months at the age of thirty-five. Shortly after his release, achieved through literary connections, he gained a reputation for co-founding the Encyclopédie, one of the Enlightenment’s pivotal productions. You can browse Diderot’s Letter above, translated by Margaret Jourdain, or purchase Kate E. Tunstall's recent translation here.