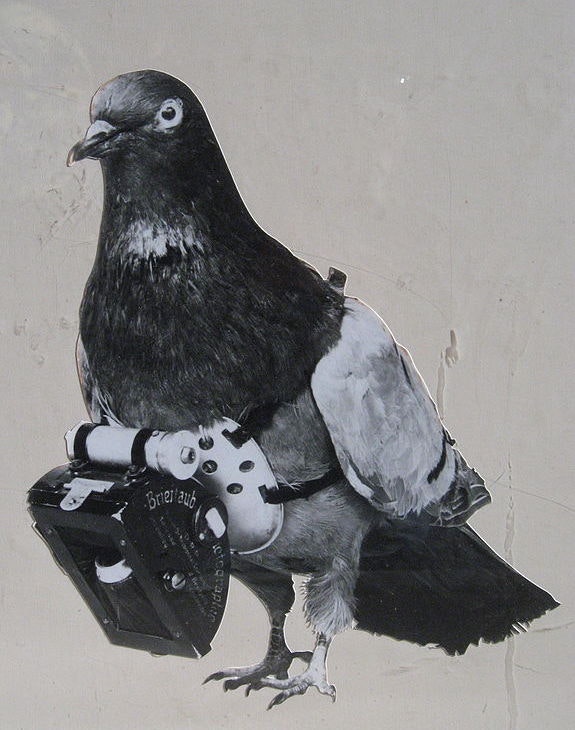 Photographing the earth from above in the early twentieth century required great ingenuity. One hundred years before drones, the two best ways both had their drawbacks. Balloons and kites could take a camera but were very restricted in their movement and speed. The stage was set for a faster, rangier kind of aerial reconnaissance. In 1907 the apothecary and amateur pigeon fancier Dr Julius G. Neubronner presented a solution to the German patent office — the pigeon camera.

Since 1903 Neubronner had been using pigeons to exchange prescriptions and urgent medications with a sanatorium a few miles from his home in Kronberg near Frankfurt. A pigeon lost during one of these flights had delighted Neubronner by returning to its dovecote four weeks later, safe and sound. The episode gave Neubronner the idea of creating lightweight, wearable cameras to record his couriers’ flights. He built several models which included a pneumatic timing mechanism to activate the shutter at set intervals, leather harness, and aluminium breastplate. Neubronner would take the pigeons up to 60 miles away before releasing them, knowing that they would want to take the most direct route home to unburden themselves. To increase the mobility of his fleet, he also built a horse-drawn dovecote with an attached darkroom. 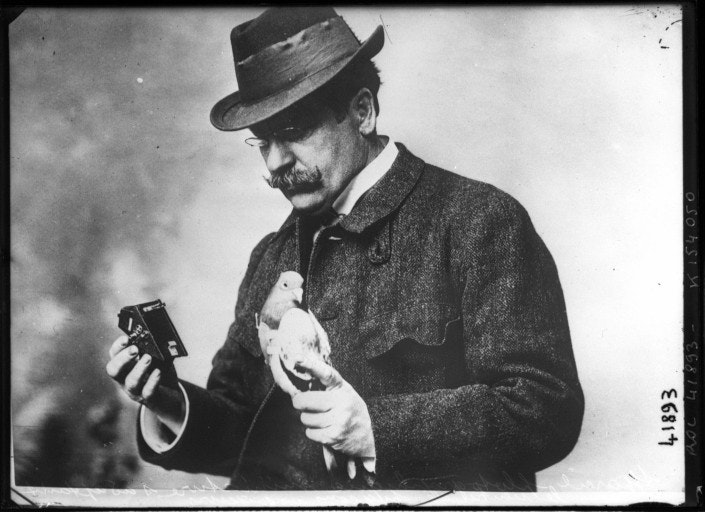 The German patent office objected to Neubronner’s application on the grounds that domestic pigeons could not possibly carry a 75 gram load. Neubronner countered the objection with photographic evidence and, in 1908, finally gained his patent. The invention brought Neubronner international notability after he presented it at expositions in Dresden, Frankfurt, and Paris in 1909–11. Spectators in Dresden could watch the arrival of the camera-equipped carrier pigeons, and the photos were immediately developed and turned into buyable postcards.

The photos – with their skewed angles and random framing – share a live, wild quality familiar to Generation GoPro but completely novel at the time. One in particular (the first of the aerial shots featured below), of the Schlosshotel in Kronberg, became famous for accidentally capturing the wing tips of its intrepid creator. The German military considered the images sufficiently impressive to test the pigeon cam on the battlefields of the Western Front. However, rapid improvements in aeroplane reconnaissance consigned Neubronner’s birds to their traditional role of carrying messages. Pigeons would go on to also play a similar role in the Second World War, as detailed in this amusing documentary.

Below we feature a selection of the fruits of Neubronner’s pigeon cam. Rorhof has published a wider selection in their 2017 book The Pigeon Photographer.