Battles of the Sexes: Duels between Women and Men in 1400s Fechtbücher

Illustration from a 1467 manuscript of Hans Talhoffer's fight book.

Around the year 1430, illustrated German-language manuscripts began to depict the art of Zweikampf: dueling, or, literally, a battle of two. Known as “fight books” (Fechtbücher), these manuals developed out of a tradition founded by the semi-mythic Johannes Liechtenauer, a fencing instructor whose biography remains almost completely obscured. Enriched by novel technical vocabulary and rubbing shoulders with Arthurian romance, these fifteenth-century manuals are most notable for their vast quantities of visualized combat, influencing parallel traditions in Italy, Spain, and France. Yet spend enough time browsing Fechtbücher and you may notice something strange. Between colorful scenes of intimate grappling, demonstrations of the longsword, lance, falchion, knife, and scythe, cheap tricks for outwitting your enemy, and the mournful aftermath of battle, we find men and women engaged in judicial duels.

A form of legal trial, the duels often begin with the man in a pit or a tub, equipped with a wooden mace, while the woman circles above, slinging a stone wrapped in a veil or “loaded” into the sleeve of her chemise. The difference in height is meant to level any physical advantage of biological sex. Various painful scenarios play out. In one sequence from fencing master Hans Talhoffer’s 1467 Fechtbüch, the man somehow flips his opponent over, piledriving her into the ditch while flourishing his weapon as if emoting victory or assault. In another, the pinned woman executes a reversal on the pit man, putting her opponent into a headlock before proceeding to pull him backward out of the earth by his ears or groin. Submission, not death, seems to be the goal. Legal codes differed on what came next: the Stadtbuch von Augsburg (ca. 1272) called for the defeated to be buried alive, while the Freisinger Rechtsbuch (ca. 1328) suggested cutting off the woman’s hand and beheading the man.

Illustration from a 1459 manuscript of Hans Talhoffer's fight book.

If these images are baffling, so too are the hastily researched articles they have fostered. In a kind of digital telephone game, a three-paragraph-long note on Talhoffer — posted by University of Oklahoma Professor Kenneth L. Hodges on the Academy of European Medieval Martial Arts webpage — is linked out to with embellished claims. There are no fewer than a dozen articles online that describe Talhoffer as outlining a common late medieval practice of divorce-by-combat — the term does not appear in the manual or post — and credit Hodges with the 1467 Fechtbüch’s discovery, despite the professor’s use of an 1887 facsimile. As Allison Coudert writes, “nowhere except in the Holy Roman Empire were judicial duels ever considered fitting means to settle marital disputes, and no record of such a duel has been found after 1200”. A more sober reflection of historical consensus regarding these images comes from a BBC interview with Neil Grant, a trustee of the UK’s Royal Armouries: “It's very, very odd – please do not ask me to explain it!” Instead of offering a theory, others have resorted to practice. In 2016, participants in the European martial arts “Dreynevent” staged a simulated combat based on Thalhoffer’s manuscript.

But some attempt at explanation is warranted given the quantity of misinformation. Was trial by combat an actual practice for resolving legal disputes between Germanic women and men in the 1400s? Or do the images reference a kind of premodern Punch and Judy show, introduced to liven swordplay pedagogy with exaggerated depictions of a perennial struggle between the sexes? To answer those questions requires knowing more about law in the era. As R. Howard Bloch describes, discussing the spread of trials by combat westward into France, this form of justice made legal process “indistinguishable from divine process, human will from godly will, positive law from divine law”. 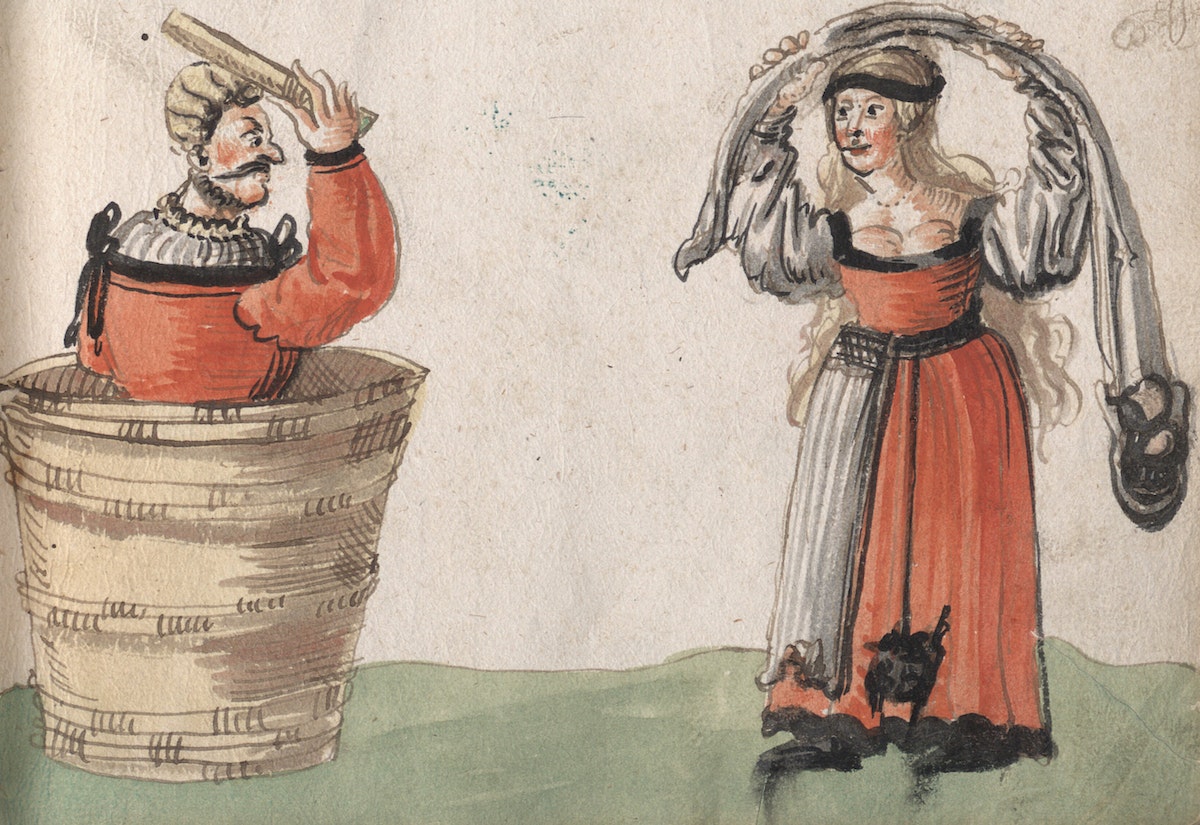 Illustration from a manuscript of Jörg Wilhalm Huter's fight book showing a variation on the man-in-the-pit duels that were figured in various 15th-century manuscripts, ca. 1523.

Finding its roots in Frankish society, trial by ordeal (whether fire, water, or combat) reached an apex between 800–1200, after the Carolingians sanctioned the now-Christenized practice. Distinct from matters of honor — the more familiar duels that involve throwing down the gauntlet at a perceived slight — these trials by combat were often prescribed only for the most serious crimes. Yet the law frequently codified the use of substitutions. Amputees, the elderly, chronically ill, and women were encouraged or mandated to seek a champion to fight on their behalf. This is not to say medieval women did not draw weapons: one of the earliest European fencing treatises features swordswomen fighting alongside male counterparts, and Vickie L. Ziegler notes that “while fighting was generally considered a man’s work, the redoubtable women of Bavaria were allowed to do battle”. Yet, for the majority, because these trials were not feats of strength — a belief that casts a perplexing light on the very logic of substitution — a proxy would do just fine. In Kathryn Gravdal’s words, “God makes the truth seen and tangible”.

How, then, would a woman find herself wielding a makeshift flail, circling a man buried up to his waist in the 1400s? In short, she probably wouldn’t. By the time these scenes began appearing in Fechtbücher, trials by ordeal of all kinds were on a steep decline. Scholars offer various explanations for the images gathered below. Claiming that “the cultural mores of the time absolutely forbade such things”, Hugh T. Knight, Jr. draws our focus to how popular entertainments “enjoyed role-switching themes for metaphoric or humorous purposes”. Yet Hodges might disagree. Analyzing the language used by Talhoffer to describe this combat, he notes how the author “is taking this seriously, not exoticizing it”. Coudert offers what seems to be the most likely explanation: fencing masters like Talhoffer and Paulus Kal copied outmoded dueling practices from passed down stories or now-lost manuscripts “to make their treatises as historically comprehensive as possible”. This is not to say that these events were not theoretically possible: a cruel 1276 Augsburg law required women who accused men of sexual violence to fight without a champion, if there were no witnesses present to the crime. We just do not have much evidence that these duels between men and women actually took place with any regularity. 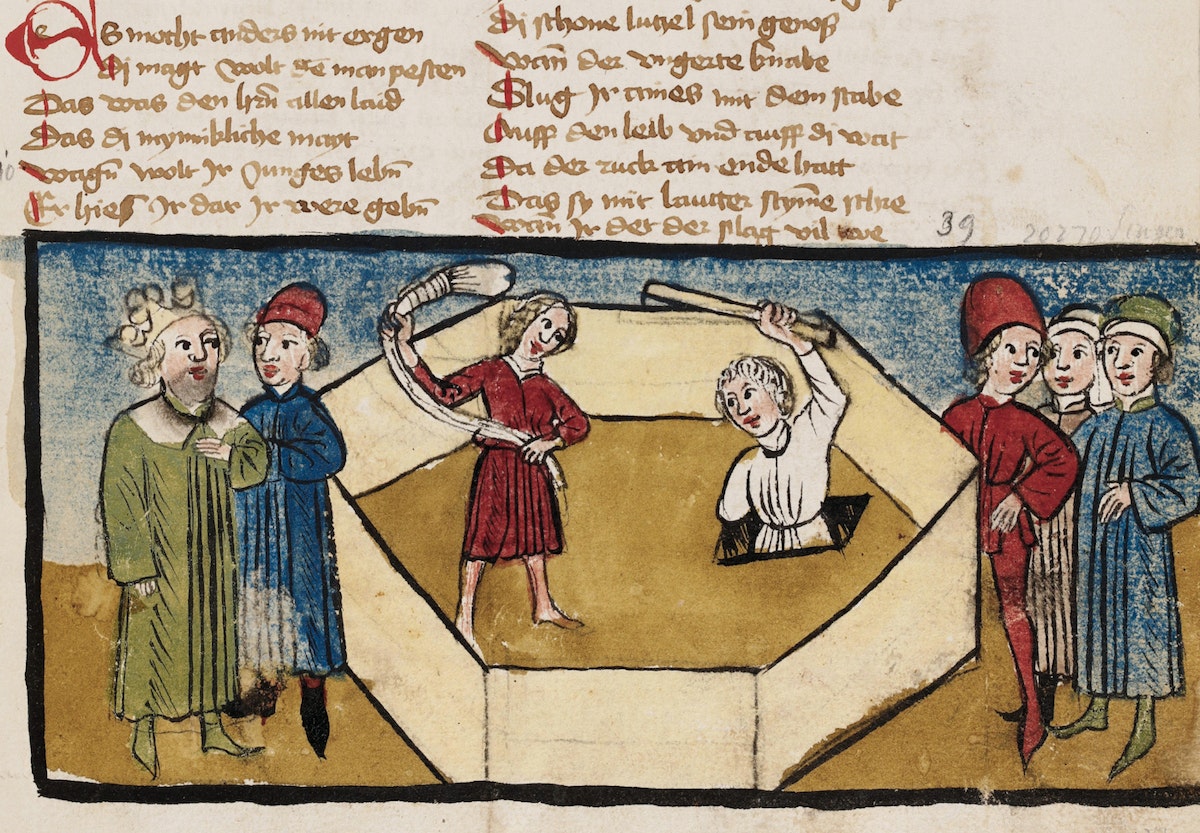 And there is a chance that these images are more engaged with the history of literature than law. In Heinrich von Neustadt’s epic Apollonius von Tyrland (ca. 1300), Flordelîse calls for a duel against Silvia of Nazareth to avenge her married sister, who he attempted to violate and subsequently slandered. Because “Si ist ain weib, er ist ain man” (She is a woman, he is a man), the city bishop finds himself stumped. Fortunately, his bookishness gets rewarded when he remembers reading about an old duel that was made fair by putting the man in a pit. Some believe this story itself was inspired by a widely circulated case of a woman who defeated a man during a 1288 combat in Bern, which Ariella Elema has called “the sole example in European history of a trial by battle between a man and a woman that the litigants pursued all the way to combat and fought in person.” More than a century before judicial duels between women and men began appearing in Fechtbücher, these events were abnormal occurrences or the stuff of a distant past, accurate or invented, witnessed firsthand by few and remembered mostly in texts.

Below you can browse a gallery of images depicting judicial duels between women and men. And here you can purchase a new translation of Talhoffer’s 1467 Fechtbüch.